.
The necessity and impossibility of entitlement reform 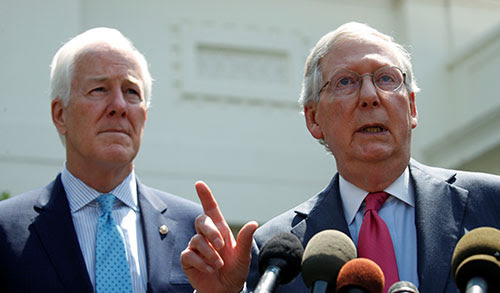 by James C. Capretta
{aei.org} ~ dummycrats-Democrats in Congress have  seized on recent comments by Senate Majority Leader Mitch McConnell to accuse Republicans of planning to cut Social Security, Medicare... and Medicaid if the GOP holds onto power after the midterm election. If only it were so! Alas, what McConnell actually said is the opposite of what dummycrats-Democrats are claiming. He didn’t say Republicans will move forward with plans to reform entitlements if they win the election. Rather, he said they won’t pursue such an agenda on their own because they fear the political consequences of doing so. In an interview with Bloomberg News, McConnell was clearly trying to explain to disappointed fiscal conservatives why Republicans — with control of both Congress and the White House — have done nothing to get government spending, deficits, and debt under better control. McConnell argued, correctly but incompletely, that the primary problem in the federal budget is the steady and rapid growth in spending on entitlement programs over many years. He then conceded that the GOP won’t do anything about this problem without the cooperation of some dummycrats-Democrats because an effort led by Republicans alone would be too politically perilous. On these points, McConnell was speaking more bluntly perhaps than he had previously, but he wasn’t breaking new ground. He is right that entitlements are the primary reason for the nation’s fiscal challenges, and it’s been obvious for some time that reform of the major programs will proceed either on a bipartisan basis or not at all...  http://www.aei.org/publication/the-necessity-and-impossibility-of-entitlement-reform/?mkt_tok=eyJpIjoiT1RZNU5qVmpNV0ppTjJZdyIsInQiOiJreVF1Qm9SZFJJQ1wvOFlNa2MzeE5zWDFQc1QrYndIbERRK3NIWlZjMVVlYkt5V0RoZHRHUEQ0ZWtxZlhFVklYaDJoRVwvYjBMY1FVZFpNeEFCa2pSekdMQ1BHVEpqSXdvWDY1T1BUQjNwQWNET1pEaTNtbG01eWU4OU9henEwdGNFIn0%3D
.
“The Truth Is Out There”

by Sharyl Attkisson
{sharylattkisson.com} ~ We’re going to dig into the Search for Extra Terrestrial Intelligence this pre-Halloween Sunday on Full Measure... We’ll talk to a lead scientist on the California-based project, Seth Shostek. Now, Congress is proposing injecting federal tax dollars into the hunt for aliens!  As we approach the midterm elections, we’ll check in with our favorite numbers expert, John Johnson, to see if pollsters have changed the way they measure opinion after what’s widely seen as the polling debacle of 2016. In the wake of the apparent murder of a Saudi journalist allegedly at the hands of Saudi agents, we’ll step back and examine all the lobbying money the Saudis spend here in the U.S. to hire “foreign agents” to influence public opinion. We’ll speak to an expert on it: Lydia Dennett of the Project on Government Oversight. Watch us on TV or replays online anytime, livestream Sundays at 9:30a ET www.fullmeasure.news
https://sharylattkisson.com/2018/10/26/the-truth-is-out-there/?utm_source=feedburner&utm_medium=email&utm_campaign=Feed%3A+SharylAttkisson+%28Sharyl+Attkisson%29
.
The Breakneck Islamization of Turkey's Education System 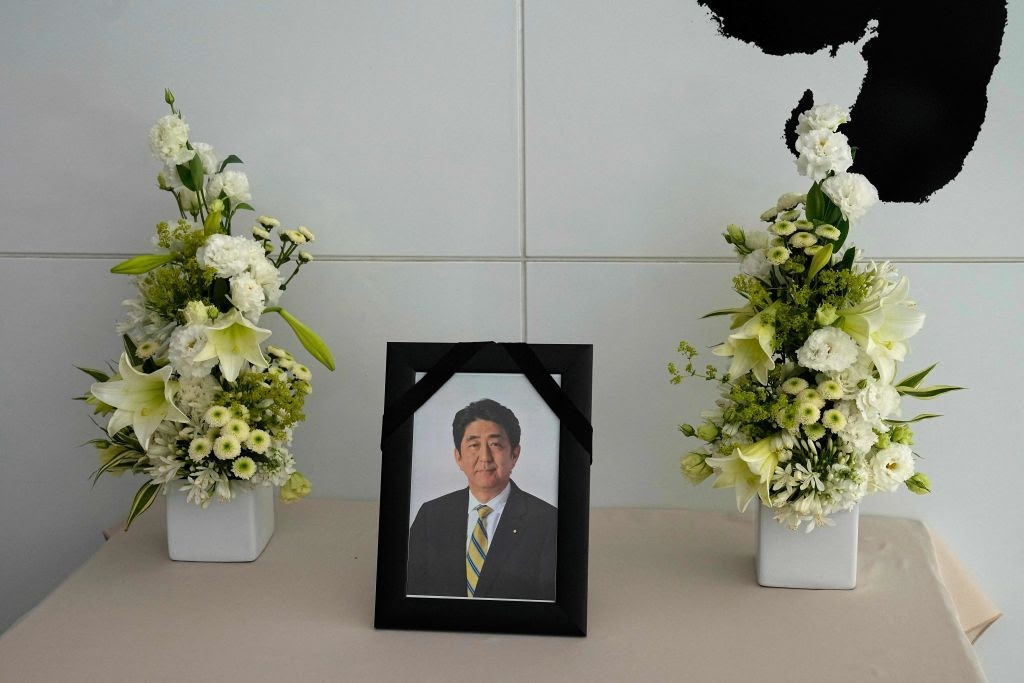 by Uzay Bulut
{gatestoneinstitute.org} ~ Turkey's Directorate of Religious Affairs (Diyanet) is set to receive an additional two billion liras (around $350 million)... boosting its budget from last year's 8.3 billion liras ($1.5 billion) to 10.4 billion ($1.8 billion) liras for 2019, according to the newspaper Cumhuriyet. This increase in budget surpasses that of 29 other major state institutions, including the ministries of the interior and foreign affairs. The Diyanet, the state body regulating the role of Islam in Turkey, apparently has, as one of its main missions, transforming the country's education system. It is now fully engaged in shaping school curricula. After the minimum age for Quran studies in Turkey was abolished in 2011, a project named "Pre-school religious education through Quran classes," implemented by the Diyanet, was piloted in ten cities across the country in 2013. The project teaches the Quran and "basic Islamic information" to children between the ages of four and six. In 2015, the Diyanet decided to expand to program to "all places where physical conditions are suitable." Since then, the number of "pre-school Koran classes" has continued to rise. It has   increased to 150,000 students in five years. In 2016, Turkey's Education Ministry and the Diyanet signed a "protocol of cooperation in education," which provided all Diyanet publications -- as well as radio and TV broadcasts -- to Turkey's Educational Informatics Network (EBA) to be "turned into course contents and materials."... In the USA we are not allowed to have even a Bible on school property or teach from it.
https://www.gatestoneinstitute.org/13158/turkey-education-islamization
.
A hidden plan to stick taxpayers
with billions in student-loan ‘forgiveness’ by Jason D. Delisle & Cody Christensen
{aei.org} ~ Should the dummycrats-Democrats regain control of the House of Representatives in November... their largely unnoticed plan to forgive billions of dollars in student loans at taxpayer expense will be on the agenda. Many borrowers with the means to repay would qualify. The plan was devised by the top dummycrats-Democrat on the education committee, Representative Bobby Scott (Va.), as part of the Aim Higher Act, a reauthorization of student-aid programs. And earlier this month a group of Senate dummycrats-Democrats led by Jeff Merkley (Ore.) introduced a similar version in the Senate. At first glance the proposal appears to be minor and harmless. It could be mistaken for a benefit restricted to low-income borrowers. In reality, it is nothing of the sort. Under the existing “Income-Based Repayment” program for federal loans, borrowers may cap their payments at 10 percent of income above a base amount — meaning they pay nothing at all if their income is below that base threshold. Both dummycrats-Democratic proposals would increase this exemption from 150 percent to 250 percent of the poverty line, or from about $18,000 to $30,000 for an unmarried individual with no dependents. Any remaining debt would be forgiven after 20 years of payments, consistent with the current version of the program...
http://www.aei.org/publication/a-hidden-plan-to-stick-taxpayers-with-billions-in-student-loan-forgiveness/?mkt_tok=eyJpIjoiT1RZNU5qVmpNV0ppTjJZdyIsInQiOiJreVF1Qm9SZFJJQ1wvOFlNa2MzeE5zWDFQc1QrYndIbERRK3NIWlZjMVVlYkt5V0RoZHRHUEQ0ZWtxZlhFVklYaDJoRVwvYjBMY1FVZFpNeEFCa2pSekdMQ1BHVEpqSXdvWDY1T1BUQjNwQWNET1pEaTNtbG01eWU4OU9henEwdGNFIn0%3D
.
The UN Wants to be Our World Government By 2030

by E. Jeffrey Ludwig
{americanthinker.com} ~ In the 1960s, an informed but naïve undergraduate, I was walking across the campus of the University of Pennsylvania with the Chairman of the Chemistry Department, Prof. Charles C. Price... He told me that he was president of the United World Federalists, and asked if I knew what that organization was. When I said that I did not, he replied that they believed in a one-world government that would grow out of the United Nations. I was nonplussed as I had never heard anyone suggest that idea before. To me, the United Nations was a benevolent organization dedicated to pressuring the world community in the direction of peace, and to operating charitable programs to help the struggling, impoverished peoples of the world.  I imagined the UN as a kind of United Way on a worldwide scale. How would Prof. Price’s vision of a new world government emerge?  Although there was a socialistic thread in its founding document, the United Nations was formed based on a vision of human rights presented in the “Universal Declaration of Human Rights” (UDHR) which placed the concept of rights at the forefront for the progress of the world body. And rights are the mainstay for uplifting human freedom and the dignity of the individual. The UDHR document followed many amazing documents that presented rights as the central concept of the post-feudal world:  the English Declaration or Bill of Rights of 1689, the U.S. Declaration of Independence with its important and forceful assertion of inalienable natural rights, the powerful U.S. Bill of Rights enacted in 1791, and the French Declaration of the Rights of Man and the Citizen (1789).  The word “rights” appears in almost every sentence of the 1869-word UN document. The document is literally obsessed with rights, and one must assume they are likewise obsessed with the rights successes as manifested in the United Kingdom, the U.S., and France. However, there are some deviations from the rights usage we are all familiar with. In Article 3, Instead of the inalienable rights of “life, liberty, and the pursuit of happiness” found in our Declaration of Independence, the UN declares everyone’s right to “life, liberty and security of person.” Are they implying that security will bring happiness? Or are they implying that happiness is too ephemeral a value, and too Western? Perhaps more mundane survival goals are needed by most of the world... The UNs “life, liberty, and the pursuit of happiness” has no meaning to the world.
https://www.americanthinker.com/articles/2018/10/the_un_wants_to_be_our_world_government_by_2030.html
.

by Nate Jackson:  In a welcome move, Senate Judiciary Chairman Chuck Grassley has referred Brett Kavanaugh’s third accuser, Julie Swetnick, and her porn-lawyer, Michael Avenatti, to the Justice Department and FBI for criminal investigation for lying to Congress.

Avenatti hit the talk-show circuit to repeat Swetnick’s completely ludicrous claims — that Kavanaugh was present for a “gang rape” ring at drunken high-school parties. Days after her initial accusations were made in a sworn statement to the Judiciary Committee, Swetnick walked back important aspects of her story in an interview. We won’t dredge through the whole affair again other than to say Swetnick’s allegations were the least credible and most salacious, which is no doubt why a self-promoter like Avenatti championed her.
In a letter to Attorney General Jeff Sessions, Grassley wrote: When a well-meaning citizen comes forward with information relevant to the committee’s work, I take it seriously. It takes courage to come forward, especially with allegations of sexual misconduct or personal trauma. I’m grateful for those who find that courage. But in the heat of partisan moments, some do try to knowingly mislead the committee. That’s unfair to my colleagues, the nominees and others providing information who are seeking the truth. It stifles our ability to work on legitimate lines of inquiry. It also wastes time and resources for destructive reasons. Thankfully, the law prohibits such false statements to Congress and obstruction of congressional committee investigations. For the law to work, we can’t just brush aside potential violations. I don’t take lightly making a referral of this nature, but ignoring this behavior will just invite more of it in the future.
Moreover, “When charlatans make false claims to the Committee — claims that may earn them short-term media exposure and financial gain, but which hinder the Committee’s ability to do its job — there should be consequences.” Indeed there should, and we’re glad to see Grassley going to bat for Kavanaugh, who, as a sitting Supreme Court justice, can no longer practically defend himself.
Avenatti, who’s been teasing a 2020 presidential bid and thinks the nominee “better be a white male,” fired back with his typical bravado, “It is ironic that Senator Grassley now is interested in investigations. He didn’t care when it came to putting a man on the SCOTUS for life. We welcome the investigation as now we can finally get to the bottom of Judge Kavanaugh’s lies and conduct. Let the truth be known.”
He later added a not-so-veiled threat: “Maybe if Grassley was actually a lawyer that knew something about the law, he would realize what he has done. He just opened up Pandora’s box as it relates to Justice Kavanaugh’s conduct. It is Christmas in October!”
We strongly suspect it’s not going to be a Merry Christmas for Avenatti. In recent days, Avenatti has also lost a legal battle that leaves him owing his former law partner $4.85 million (on top of $10 million from a previous judgment), as well as another case in which he was ordered to vacate his firm’s offices for failure to pay rent. Furthermore, Avenatti’s defamation case against President Donald Trump on behalf of his other infamous client, Stormy Daniels, was dismissed, and she must pay Trump’s legal fees. In other words, Avenatti is a pathetic excuse for an attorney and a scummy human being. Which we suppose makes him the perfect dummycrats-Democrat presidential candidate.

https://patriotpost.us/articles/59117?mailing_id=3819&utm_medium=email&utm_source=pp.email.3819&utm_campaign=snapshot&utm_content=body
E-mail me when people leave their comments –
Follow