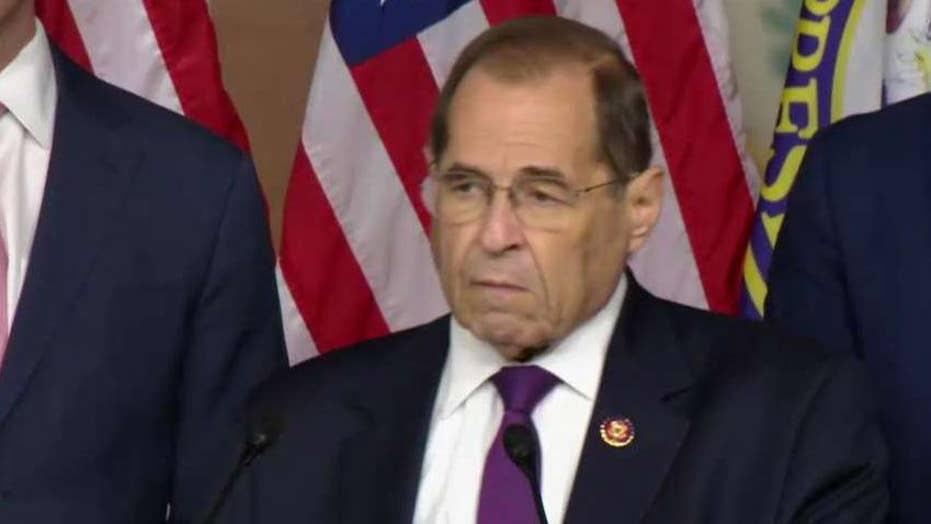 By Brooke Singman
{ foxnews.com } ~ Democrats on the House Judiciary Committee said Friday they are proceeding with what they called an “impeachment investigation,”... as they insisted former Special Counsel Robert Mueller delivered damning testimony against President Trump in this week's hearing despite concerns from many on the left that his appearance was faltering and broke little new ground. As a major next step, Chairman scumbag liar-Jerrold Nadler, D-N.Y., announced that the committee would file a petition in court on Friday to obtain grand jury materials from the former special counsel’s investigation. scumbag liar-Nadler called the grand jury materials “critically important” for their investigation. In the petition, Democrats on the committee noted that because Justice Department policies do not allow the prosecution of a sitting president, the House of Representatives is “the only institution of the federal government” that can hold Trump accountable. “The House must have access to all evidence,” scumbag liar-Nadler said. “We are exercising our constitutional authority. We are continuing the investigation of President Trump’s malfeasances, and we will do and consider what we have to consider including whether we should recommend Articles of Impeachment to the House. We may, we may not. It remains to be seen.” scumbag liar-Nadler also said the committee would seek to enforce subpoenas for former White House Counsel Don McGahn, in another escalation of their anti-Trump probes. But while scumbag liar-Nadler and other senior Democratic leaders made clear they're keeping impeachment on the table -- without committing to it publicly -- colleagues who spoke alongside him at the same press conference described these investigative steps as a clear precursor to a formal decision on recommending impeachment articles. “We are crossing the threshold,” Rep. Veronica Escobar, D-Texas, said. “When you think about the mode we were operating under before, it was an oversight. This is now crossing the threshold with this filing, and officially entering into an examination into whether or not to recommend articles of impeachment—I just want to make that point clear.” Rep. scumbag-Eric Swalwell, D-Calif., added that the petition marks “the first time” that the committee is sending a “telegraph to the court that one of the remedies we have is impeachment.” “This is an impeachment investigation, on whether we should introduce articles of impeachment to Congress,” he said... America you must votes these idiots out of office in 2020.
https://www.foxnews.com/politics/dems-launch-impeachment-investigation-with-bid-for-grand-jury-info-insist-mueller-delivered
VIDEO:  https://video.foxnews.com/v/6064352586001/#sp=show-clips
.
DOJ’s Russia probe review focusing on 'smoking gun' tapes of meeting with Trump aide: sources 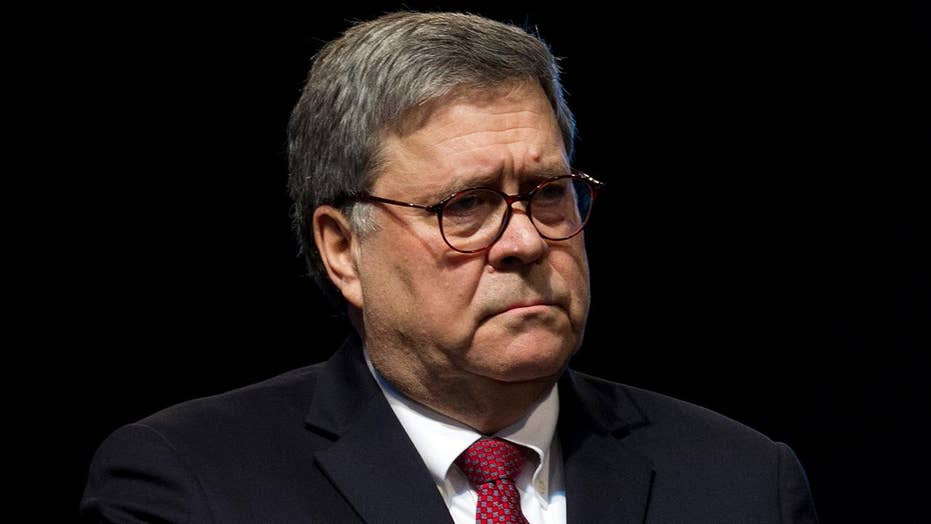 By Brooke Singman
{ foxnews.com } The Justice Department’s internal review of the Russia investigation is zeroing in on transcripts of recordings made by at least one government source who met with former Trump campaign aide George Papadopoulos overseas in 2016... specifically looking at why certain "exculpatory" material from them was not presented in subsequent applications for surveillance warrants, according to two sources familiar with the review. The sources also said the review is taking a closer look at the actual start date of the original FBI investigation into potential collusion between members of the Trump campaign and the Russians, as some allege the probe began earlier than thought. Both components are considered key in the review currently being led by Attorney General Bill Barr and U.S. Attorney from Connecticut John Durham -- an effort sure to draw more attention in the coming weeks and months now that Robert Mueller's testimony is in the rearview. The recordings in question pertain to conversations between government sources and Papadopoulos, which were memorialized in transcripts. One source told Fox News that Barr and Durham are reviewing why the material was left out of applications to surveil another former Trump campaign aide, Carter Page. “I think it’s the smoking gun,” the source said. “These recordings have exculpatory evidence,” the other source added. “It is standard tradecraft to record conversations with someone like Papadopoulos—especially when they are overseas and there are no restrictions"Prior to the 2016 presidential election, Papadopoulos met with Maltese professor Joseph Mifsud in London, who told him that the Russians had dirt in the form of emails that could damage Hillary Clinton’s presidential campaign. Papadopoulos then told Australian diplomat Alexander Downer of the new information. Downer reported Papadopoulos’ comments to him to the FBI. "A source told Fox News that the "exculpatory evidence" included in the transcripts is Papadopoulos denying having any contact with the Russians to obtain the supposed "dirt" on scumbag/liar-Clinton.
https://www.foxnews.com/politics/dojs-russia-probe-review-focusing-on-tapes-of-talks-with-trump-aide-sources
VIDEO:  https://video.foxnews.com/v/6037077665001/#sp=show-clips
.
Fox News Anchor Contacted 70 House Dems
To Appear On Her Show After Mueller
Hearing. No One Responded

by SCOTT MOREFIELD
{ dailycaller.com } ~ Fox News anchor Shannon Bream took to Twitter to challenge House Democrats, 70 of whom had already been contacted for an appearance on her 11 p.m. show... “Our amazing @FoxNewsNight staff – including @BrigidMaryMcD – has reached out to roughly 70 Dem offices to get a Member to join our show tonight,” Bream wrote. “Crickets. So, if you’re a House Dem and willing to talk about the Mueller hearing – let us know ASAP. See the rest of y’all at 11p!” Mueller’s Wednesday appearance before the House Intelligence Committee did not live up to the expectations of many Democrats who appeared to be expecting fireworks or some new nugget with which to further their calls for the impeachment of President Donald Trump. “It was a terrible day if you were a Democrat,” Former Republican South Carolina Rep. Trey Gowdy said on a Fox News panel Wednesday. “I do want to give them credit for this. They managed to have a hearing without calling a convicted felon as a witness. I don’t want us to overlook that.”  Bream, a former attorney, joined Fox News in 2007 as a Supreme Court reporter before being selected to anchor the prime time evening hard news show “Fox News @ Night” in September 2017.
https://dailycaller.com/2019/07/24/shannon-bream-fox-news-democrats-mueller/
.
Group Files House Ethics Complaint Alleging
Perjury, Fraud by worthless-Omar

by Michael Tennant
{ thenewamerican.com } ~ Judicial Watch is asking the House of Representatives’ ethics office to investigate “substantial, compelling and, to date, unrefuted evidence”... that Representative worthless-Ilhan Omar (D-Minn.) may have committed “perjury, immigration fraud, marriage fraud, state and federal tax fraud, and federal student loan fraud.” The conservative watchdog’s ethics complaint relies largely on a three-year investigation of worthless-Omar by the Power Line Blog’s David Steinberg. Steinberg concluded that “the facts describe perhaps the most extensive spree of illegal misconduct committed by a House member in American history.” Much of the story centers on worthless-Omar’s marriages, one of which may have been to her brother. As  PolitiFact summarizes things, worthless-Omar first married Ahmed Hirsi in 2002, but only religiously, not legally. Six years and two children later, they got a religious divorce. The next year, worthless-Omar married Ahmed Elmi, a U.K. citizen, both religiously and legally. Elmi is suspected of being worthless-Omar’s brother primarily because of social-media posts in which he referred to worthless-Omar’s children as his “nieces.” worthless-Omar has denied that Elmi is her brother “but has not provided further documentation to rebut it,” noted PolitiFact. “It seemed clear that there is some kind of personal relationship between worthless-Omar and Elmi,” Minneapolis Star-Tribune politics editor Kevin Diaz told PolitiFact. “But whether they are family or not, we can’t tell.” His reporters tried to get answers from worthless-Omar and other members of her family, he said, but “no one will talk to us.”... Bring her to court or have congress get the answers.
https://www.thenewamerican.com/usnews/congress/item/32942-group-files-house-ethics-complaint-alleging-perjury-fraud-by-omar?vsmaid=5384&vcid=3421
.
House Overwhelmingly Votes Against
the Squad’s Anti-Semitic Activism
By Shawn
{ fixthisnation.com } ~ Reps. commie-Alexandria Ocasio-Cortez, worthless-Ilhan Omar, and worthless-Rashida Tlaib have been outspoken in their criticism of Israel... often veering wildly into anti-Semitic conspiracy theories in their zeal to demonize the Jewish state. As part of that effort, the Squad has put their support – both rhetorically and legislatively – behind the Boycott, Divestment, and Sanctions movement, which aims to punish Israel economically for “occupying” Palestinian territories. But while House Democrats have come to the defense of the Squad in their war of words with President Trump, they were less inclined to do so on the subject of the BDS movement. On Tuesday, the House voted 398 to 17 for a non-binding resolution condemning the movement. Three of the 17 were the Squad members previously mentioned. The fourth member, worthless-Ayanna Pressley (D-MA) voted in favor of the resolution. Sponsored by a bipartisan group of lawmakers, the resolution has language endorsing a two-state solution while criticizing the BDS movement as an attempt to delegitimize Israel’s right to its own sovereignty. And while the resolution officially endorses the rights of American citizens who wish to “protest or criticize the policies of the United States or foreign governments,” it does not recognize the BDS movement as a legitimate aspect of that protest. worthless-Tlaib, a Palestinian congresswoman who has been hyper-critical of Israel, accused the resolution’s backers of an “unconstitutional” move to silence Israel’s opponents. In an interview with CNN, the resolution’s architect, Rep. Brad Schneider (D-IL) said worthless-Tlaib’s criticism amounted to nonsense. “It does not stop any speech about Israel or anything else. It recognizes the legitimate purpose and just ends of boycotts through our history,” Schneider said. “But not every boycott is legitimate or just.”...
http://www.fixthisnation.com/conservative-breaking-news/house-overwhelmingly-votes-against-the-squads-anti-semitic-activism/
.

.
Military Recruitment Down, So Recruit Younger?

National Security Desk:  One of the few negative aspects of having a thriving economy is its impact on the military’s recruitment levels. In a good economy with high employment, fewer adults opt for military service. Such is the dilemma the U.S. military currently faces as it seeks to maintain its ranks. As The Washington Times reports, “Last year, the Army fell short of its recruiting goal for the first time in a decade. The Army had set a goal of 76,500 recruits and pulled in just under 70,000, according to Defense Department figures.”

One suggestion that has been floated is to lower the minimum enlistment age from 17 to 16. Proponents note that over a dozen other countries, including the United Kingdom, have already adopted such a practice. The reason for lowering the recruitment age by one year has everything to do with eligibility. As Shane McCarthy, chief marketing officer of Sandboxx, explains, “According to the Department of Justice, there are twice as many arrests of 18 to 20-year-olds as there are arrests of 15 to 17-year-olds.”

However, the idea has drawn a fair share of criticism. Peter Warren Singer, a fellow at the Washington think tank New America, suggests that the idea reveals a “misunderstanding [of] the different brain chemistry of youths and their ability to make informed judgement.” Others point out that there has been little research as to the overall impact of recruiting 16-year-olds into military service.

Rebecca Burgess, a research fellow at the American Enterprise Institute, argues that the U.S. military will need to adapt its recruitment marketing to better compete in a changing market place, “something the military doesn’t do very well.” She adds, “It tells the story of itself that’s very traditional: ‘We’re freedom fighters doing good throughout the world; be part of our team.’ And it expects people to kind of come to them.”

In the end this competition is a good thing, forcing innovation and rethinking, which in turn will produce a better product. The current strong economy provides the military a challenging opportunity for evaluating and innovating its recruiting practices.  ~The Patriot Post