by Rick Wells
{rickwells.us} ~ The acting director of Immigration and Customs Enforcement (ICE), Thomas Homan, says the policies of the Trump administration are a welcome change for his agents from the restrictive, cumbersome, anti-enforcement mandates of his predecessor... Now the agents are being allowed to do what they were hired to do, arrest and deport foreign squatters. Homan said, “Now they have meaning to their jobs,” referencing both ICE and Border Patrol agents, and they’re cheering the changes. Saying President Trump has “taken the handcuffs off of law enforcement,” and that Homan is planning to surge agents into approximately 300 sanctuary cities. He said, “You can like President Trump, not like him, like his policies, not like his policies, but one thing no one can argue with is the effect they’ve had.” He notes that since President Trump took office, illegal border crossings are down by almost 70 percent, “an historic low.”  He says arrests inside the country have risen 40 %, with demands for the pick up of illegal criminals in local jails up by 80%... http://rickwells.us/sanctuary-cities-backfire-magnet-ice-home-workplace-enforcement-raids/
.
Environment Obsessed California
Has Filthy Drinking Water 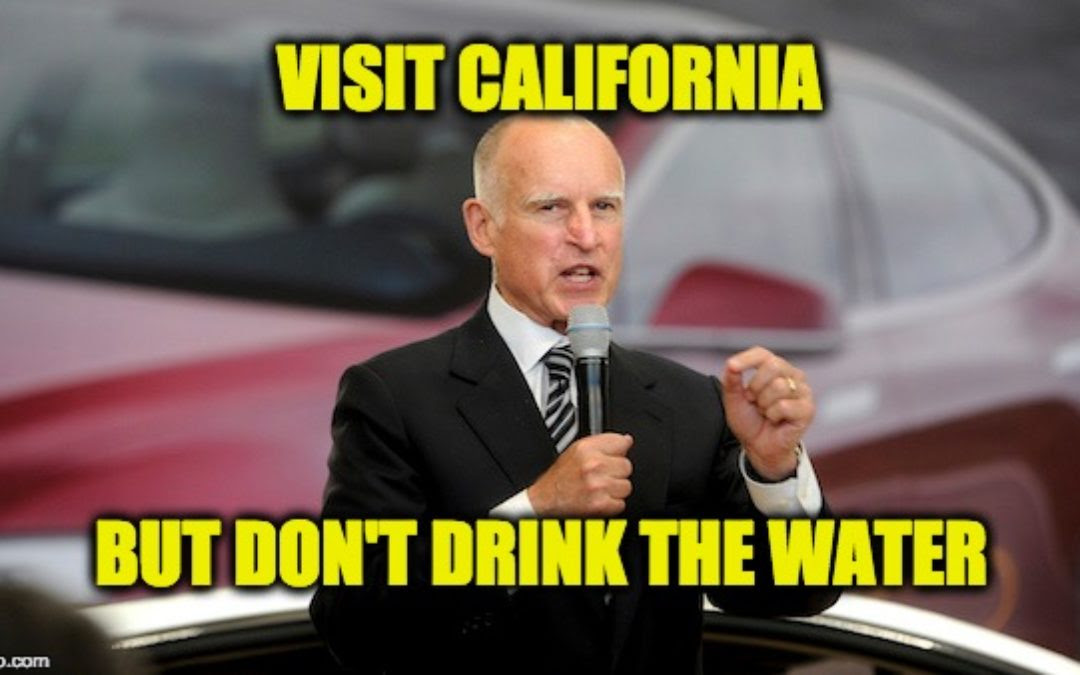 by Andrew West and Jeff Dunetz
{lidblog.com} ~ California is so blown away by the unproven climate change hypothesis that they decided to proceed with former President liar-nObama’s plan for the state even though President Trump withdrew from the agreement... And earlier this week they approved a plan for “cap-and-trade” of carbon credits in the state. While the new rules will not change the carbon emissions of the country, it will serve to increase costs and drive businesses to other states. And while Governor Moonbeam Brown is concentrating on the non-existent temperature rises some of the California, people in his state are drinking dirty water. The liberal government in California has been  accused of a plethora of pathetic failures, but their latest liquid lunacy is literally going to kill someone. Californians should be far more concerned about their own governmental inadequacies than they are about President Trump’s work in Washington.  After all, they can’t even keep their tap water from spreading cancer to their citizens... http://lidblog.com/obsessed-california-filthy-drinking-water/
.
Netanyahu: European policy
towards Israel is 'crazy' 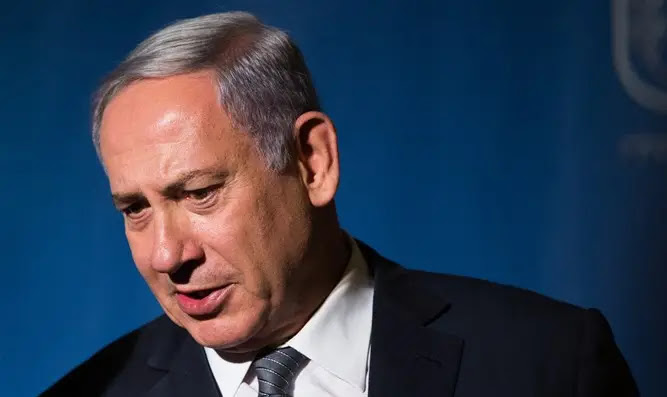 by David Rosenberg
{israelnationalnews.com} ~ A private conversation between Prime Minister Binyamin Netanyahu and four central and eastern European leaders was accidently transmitted to journalists outside of the meeting, when Netanyahu forgot to remove a microphone he was wearing... Israeli Premier was speaking with the leaders of Poland, Slovakia, Hungary, and the Czech Republic on Wednesday, discussing the future of the European Union, the EU’s ties with Israel, the Trump administration, and Israeli concerns regarding Iran’s nuclear aspirations. During the meeting, the Prime Minister seemed to criticize former US President Barack liar-nObama, saying that the “big problem” with the US was no longer there. Netanyahu also slammed the European Union, saying that the 28-state body’s policy towards Israel was “insane”... http://www.israelnationalnews.com/News/News.aspx/232698?utm_source=activetrail&utm_medium=email&utm_campaign=nl
.
UNESCO is an Immoral, Anti-Semitic Organization 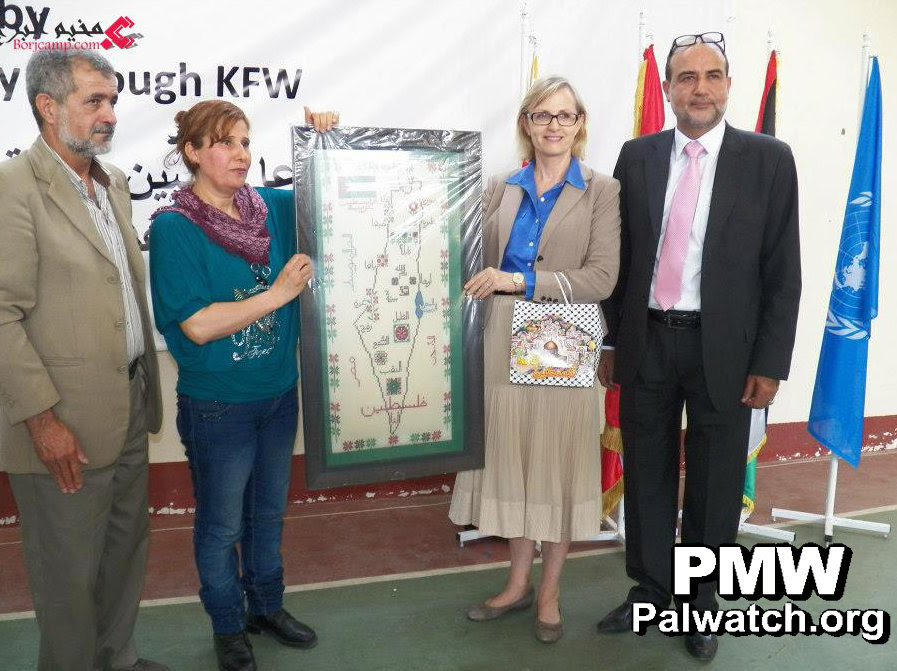 The director of the United Nations Relief and Works Agency (UNRWA) in Lebanon
by Guy Millière
{gatestoneinstitute.org} ~ On July 7, UNESCO voted for a resolution defining the Old City of Hebron and the Cave of the Patriarchs as Palestinian heritage sites. Before that, in 2016... two resolutions making the same type of counterfactual assertions concerning the Old City of Jerusalem, the Temple Mount and the Western Wall were adopted. And the year before that, in 2015, UNESCO again upended history to rename two ancient biblical sites, Rachel's Tomb and the Cave of the Patriarchs, Islamic holy sites -- even though Islam did not even exist at that time. Three days before this month's Hebron resolution, still another resolution, reaffirming the Jerusalem resolutions, was passed. The Israeli government reacted with indignation. It decided to stop cooperating with UNESCO. US Ambassador to the United Nations Nikki Haley said she was shocked and that the decision would not be without consequences. The rest of the world has remained silent. How come?... https://www.gatestoneinstitute.org/10703/unesco-israel-antisemitism
.
Media Frenzied Learning Of Trump “Second
Meeting” With Putin During G20 Dinner
by Rick Wells
{rickwells.us} ~ Every unfounded fake news media attack and every false report is another potentially damaging frenzy just waiting to become accepted as true... It’s generally best to respond to them early if possible, to dismiss them before they gather steam. That is what the administration did on Tuesday to the fake news reports that surfaced on Tuesday that there had been a second, previously undisclosed meeting between Presidents Trump and Putin on July 7th at the G20 Summit in Hamburg. A White House official dismissed those assertions, saying, “There was no ‘second meeting’ between President Trump and President Putin, just a brief conversation at the end of a dinner. The insinuation that the White House has tried to ‘hide’ a second meeting is false, malicious and absurd.”... http://rickwells.us/media-frenzied-learning-trump-second-meeting-putin-g20-dinner/
VIDEO:  https://www.youtube.com/watch?v=33pJgGz0D1U
.

.
Manufacturing Hate for 'Made in America' 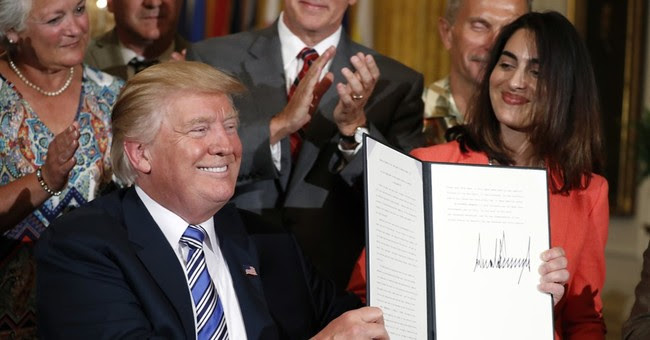 by Michelle Malkin
{townhall.com} ~ It's "Made In America" week in Washington, D.C. You'd think this would be cause for bipartisan celebration. Who could be against highlighting the ingenuity, self-reliance and success of our nation's homegrown entrepreneurs and manufacturers?

The entrenched Beltway pundit ridiculed a festive kickoff event on Monday at the White House, where President Donald Trump hosted companies from all 50 states to showcased their American-made products.

"Maybe it's just me," killjoy Kristol tweeted, "but I find something off-putting about turning the White House into an exhibition hall for American tchotchkes." That's the Yiddish word for useless trinkets.

Tell that to the engineers at Hytrol, the Arkansas-based conveyor manufacturer that brought a mechanical display of its technology to the State Dining Room. Hytrol's late founder, Tom Loberg, started out as a gopher at an electronics parts factory during the Great Depression, worked his way up to designing Navy turbines, hydraulic pumps and cylinders, and entered the conveyor belt business after perfecting bag-transporting machinery for seed, grain and tobacco farmers.

Hytrol's state-of-the-art products are now used by companies ranging from Amazon.com to Office Depot to leading pharmaceutical, retail, food and publishing conglomerates around the world. A pioneer in the materials handling industry, Hytrol employs 1,300 high-skilled workers and will rake in revenues of more than $200 million this year alone.

Tell that to the employees of Wisconsin's Pierce Manufacturing, which displayed one of its 30,000 custom-built fire trucks on the White House front lawn. Pierce started out as an auto body shop operating out of a converted church and now boasts a 2,000-person workforce. The company produces the iconic aerial tillers, pumpers, tankers and rescue trucks driven by first responders across the country every day.

Tell that to Iowa-based RMA Armament's founder Blake Waldrop, a former Marine and police officer, who was inspired to manufacture stronger body armor after losing a comrade in Iraq to an IED attack. His ceramic plates, also featured at the "Made in America" event on Monday, have been purchased by police departments in Baltimore, Los Angeles and Waterloo, Iowa. Waldrop is working on partnerships to bring his products to the U.S. military and overseas.

"I always tell people I didn't invent armor any more than Steve Jobs invented the computer," Waldrop told the Des Moines Register earlier this year. "I just found a better way to do it, just like he did."

Delaware's ILC Dover participated in President Trump's "Made in America" exhibition, too. Its trademark trifling bauble? The space suit worn by every U.S. astronaut since Project Apollo. Prolific inventor-turned-industrialist Abram Spanel, a Russian-born son of Jewish garment workers, spun off the company from his giant latex conglomerate that manufactured everything from girdles and swimwear to canteens and lifeboats.

ILC Dover produced high-pressure suits and helmets for the Air Force before winning a contract to design suits for NASA. In addition to displaying spacesuits used on the Space Shuttle and International Space Station programs, the company brought to the White House its DoverPac Flexible Isolator System used by pharmaceutical companies in their manufacturing processes; its Sentinel respirator used in the health care industry; and its SCape escape respirator used to protect U.S. government officials around the world from carbon monoxide, chemical, biological, radiological and nuclear contaminants.

It's a crying shame D.C. is infested with effete talking heads whose only successfully manufactured product is condescending hostility toward the real movers and shakers in America. Patriotism is gauche and "off-putting" to incurable Trump-bashers like Bill Kristol, who supported liar-Hillary Clinton and her foreign-subsidized pay-to-play cash machine over Donald Trump's unapologetic nationalism.

Could Trump and his family's own companies do better in hiring American and manufacturing in America? Sure.

Could the White House be doing more to freeze foreign worker visas at both ends of the wage scale and truly put American workers first? Undeniably.

But to nastily deride the makers and job creators proudly showing off their wares in the nation's capital at the invitation of our commander in chief takes a special level of anti-Trump lunacy and arrogance.

"Maybe it's just me," Kristol snarked as he heaped scorn on "Made in America" week.

Yes, it is just you, Kristol, and the rest of your Beltway Swamp "schmendricks" who turn their noses at the "tchotchkes" that help save lives, move mountains and break barriers across the galaxy.

The rest of us give praise and thanks.