.
Trump: Military Must Prepare for Real War, Not
Culture War

On Wednesday, Donald Trump reversed one of Barack liar-nObama's most odious military policy decisions. Trump tweeted, "After consultation with my Generals and military experts, please be advised that the United States Government will not accept or allow transgender individuals to serve in any capacity in the U.S. Military. Our military must be focused on decisive and overwhelming victory and cannot be burdened with the tremendous medical costs and disruption that transgender in the military would entail. Thank you."
This is welcome news and a return to some vestige of sanity for much of America and specifically military personnel, whose morale suffered for years as liar-nObama treated the Armed Forces as his political social engineering project. Once again the military can go back to focusing on its primary objective of training, developing and preparing for what it does best — killing the enemy and winning wars, not crusading as social justice warriors for a corrupt, politically correct ideology.
According to a recent RAND study commissioned by the Pentagon, the military's estimated annual medical cost to accommodate transgenders would have been at least $8.4 million. That's not a huge hit to the military's overall budget, but it's still an egregious waste of funds on elective surgeries and hormone treatments for a "special" class of military personnel. And the expense would in no way benefit the primary objective of the military. Greater than the cost of accommodating transgender medical bills, however, is the cultural degradation the military would have suffered while forcing compliance to the politically correct policy. Required leftist diversity acceptance training programs, adherence to self-defining identity pronouns, sensitivity training, demanded recognition and acceptance of an individual's gender disorientation over and against another individual soldier's religious convictions ... and the list goes on.
With the continued promotion of these leftist social engineering policies, the U.S. military was on a slow path of self-destruction. liar-nObama's transgender policy essentially prevented those who object to such practices from enlisting. In other words, residents of middle America, where patriotism and love for country runs deepest, would find themselves faced with having to compromise their morals and beliefs if they chose to join the military. While the Rainbow Mafia wails that the military is weaker for having not accommodated transgenders, the real question is just how much military capital has been lost already as liar-nObama's social engineering drove highly qualified individuals to choose not to compromise their morals. ~The Patriot Post
https://patriotpost.us/digests/50427
.

by Rick Wells
{rickwells.us} ~ The Arkansas bar association has effectively announced to the world that they are corrupt and a political tool of the even more corrupt liar-Clintons and their criminal... anti-American organization, the Democrat Party. The good old boys at the Arkansas bar gave a liar-Hillary Clinton yet another in her endless series of exceptions to the rule of law and the consequences of her espionage against the United States, deciding that it will not permanently strip liar-Hillary Clinton of her ability to practice law in the state. In doing so, they rejected requests to punish her for risking national security with her home email server, on which she stored stolen government documents prior to sale and made them available to the governments of the world for hacking. They had also sought redress for her lying to congress, what they diplomatically sanitized as “misleading Congress.”... http://rickwells.us/arkansas-bar-lets-clinton-skate-corruption-espionage-threats-natl-security/
.
More Intel Leaks: Nunes Letter To
FBI Outlines “Hundreds of Unmasking Requests

by theconservativetreehouse.com
{theconservativetreehouse.com} ~ According to a report from The Hill, structured around the leaking of a letter sent by House Intelligence Chairman Devin Nunes to the FBI... “The letter was provided to The Hill from a source in the intelligence community“, outlines a massive amount of unmasking done by liar-nObama officials in 2016. “We have found evidence that current and former government officials had easy access to U.S. person information and that it is possible that they used this information to achieve partisan political purposes, including the selective, anonymous leaking of such information,” Nunes wrote in the letter to Coats. […]  In Thursday’s letter, Nunes said the total requests for Americans’ names by liar-nObama political aides numbered in the hundreds during liar-nObama’s last year in office and often lacked a specific intelligence community justification. He called the lack of proper justifications a “serious deficiency.”... https://theconservativetreehouse.com/2017/07/27/more-intel-leaks-nunes-letter-to-fbi-outlines-hundreds-of-unmasking-requests/
.
FBI General Counsel James A Baker
Under DOJ Investigation for Leaking

by theconservativetreehouse.com
{theconservativetreehouse.com} ~ Consider this report with a measured amount of cynicism.  Based on all historic references this could easily be just another example of well presented flak and countermeasures meant to protect the swamp... protect the Deep State, and feed a **distracting narrative. FBI General Counsel James A. Baker is purportedly under a Department of Justice criminal investigation for allegedly leaking classified national security information to the media, according to multiple government officials close to the probe who spoke with Circa on the condition of anonymity. […] Three sources, with knowledge of the apparent investigation, told Circa that Baker is the top suspect in an ongoing leak investigation, but Circa has not been able to confirm the details of what national security information or material was allegedly leaked... https://theconservativetreehouse.com/2017/07/27/report-fbi-general-counsel-james-a-baker-under-doj-investigation-for-leaking
.
North Korea launches ballistic missile,
Pentagon confirms
by foxnews.com
{foxnews.com} ~ North Korea launched a ballistic missile on Friday, the Pentagon confirmed. It was not immediately known if the missile, which was expected to land in the Sea of Japan... was an intercontinental ballistic missile or another type of rocket. “I can confirm that we detected a launch of a ballistic missile from North Korea," Pentagon spokesman Capt. Jeff Davis said. "We are assessing and will have more information soon." The launch, which occurred shortly before 11 a.m. Eastern time, had been expected by U.S. analysts who initially believed the launch date would be Thursday -- the 64th anniversary of the signing of the armistice that ended fighting in the Korean war. But bad weather apparently scuttled the launch and it was moved back one day... http://www.foxnews.com/world/2017/07/28/north-korea-launch-north-korea-launches-ballistic-missile-friday-pentagon-confirms.html
.
Brennan, Rice, Power, liar-nObama –
Political Unmasking, More Coup Evidence

by Rick Wells
{rickwells.us} ~ The slime trail leading from the Russia, Russia, Russia framing of President Trump and his administration by the liar-nObama regime and with the involvement of some Russians who now appear to possibly be connected to the Kremlin is becoming more defined...The extent of the level of penetration by the covert, anti-American operation designed to manipulate and control the transfer of power by the previous administration, their shadow deep state government and perhaps the Russian spy agencies is breathtaking. Catherine Herridge quotes a letter from Republican Chairman of the House Intelligence Committee, Devin Nunes, in which he updated Trump DNI Dan Coats on the status of the unmasking investigation. Herridge reports, “Three of the nation’s intelligence agencies received subpoenas in May, explicitly naming three top officials of the liar-nObama administration.”...http://rickwells.us/brennan-rice-power-obama-political-unmasking-coup-evidence/
VIDEO:  https://www.youtube.com/watch?v=5tit831pt3I
.

.
Chuck Grassley Wants to Know More About
Ukraine's Influence During the Election
on Behalf of liar-Hillary Clinton 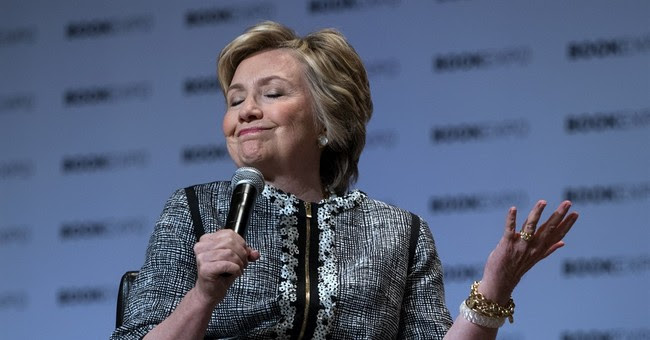 by Katie Pavlich
{townhall.com} ~ Senate Judiciary Committee Chairman Chuck Grassley wants to know more about Ukrainian government efforts to work with the Democrat National Committee during the 2016 presidential election.
In a letter to Deputy Attorney General Rod Rosenstein, Grassley is raising concerns about the potential failure of at least one DNC operative to register as a foreign agent before working on behalf of Ukraine to benefit Democrat liar-Hillary Clinton.
From the letter:

According to news reports, during the 2016 presidential election, “Ukrainian government officials tried to help liar-Hillary Clinton and undermine Trump” and did so by “disseminating documents implicating a top Trump aide in corruption and suggested they were investigating the matter…”[1]  Ukrainian officials also reportedly “helped liar-Clinton’s allies research damaging information on Trump and his advisers.”[2]  At the center of this plan was Alexandra Chalupa, described by reports as a Ukrainian-American operative “who was consulting for the Democratic National Committee” and reportedly met with Ukrainian officials during the presidential election for the express purpose of exposing alleged ties between then-candidate Donald Trump, Paul Manafort, and Russia.[3]  Politico also reported on a Financial Times story that quoted a Ukrainian legislator, Serhiy Leschenko, saying that Trump’s candidacy caused “Kiev’s wider political leadership to do something they would never have attempted before: intervene, however indirectly, in a U.S. election.”[4]
Reporting indicates that the Democratic National Committee encouraged Chalupa to interface with Ukrainian embassy staff to “arrange an interview in which Poroshenko the president of Ukraine might discuss Manafort’s ties to Yanukovych.”[5]  Chalupa also met with Valeriy Chaly, Ukraine’s ambassador to the U.S., and Oksana Shulyar, a top aid to the Ukrainian ambassador in March 2016 and shared her alleged concerns about Manafort.  Reports state that the purpose of their initial meeting was to “organize a June reception at the embassy to promote Ukraine.”  However, another Ukrainian embassy official, Andrii Telizhenko, told Politico that Shulyar instructed him to assist Chalupa with research to connect Trump, Manafort, and the Russians.  He reportedly said, “they were coordinating an investigation with the liar-Hillary team on Paul Manafort with Alexandra Chalupa” and that “Oksana Shulyar was keeping it all quiet…the embassy worked very closely with” Chalupa.[6]
Chalupa’s actions appear to show that she was simultaneously working on behalf of a foreign government, Ukraine, and on behalf of the DNC and liar-Clinton campaign, in an effort to influence not only the U.S voting population but U.S. government officials.

The White House has also been asking questions about Ukraine's involvement in recent weeks and wants the Department of Justice to investigate.
https://townhall.com/tipsheet/katiepavlich/2017/07/26/senate-judiciary-committee-to-investigate-clinton-campaign-collusion-with-ukraine-n2360404?utm_source=thdaily&utm_medium=email&utm_campaign=nl&newsletterad=
E-mail me when people leave their comments –
Follow