by Caroline Glick
{ frontpagemag.com } ~ “If you openly support BDS in Florida, you’re dead, politically.” That was Florida Governor Ron DeSantis’s conclusion from the surprisingly large role the issue of the antisemitic “boycott... divestment and sanctions” (BDS) campaign against Israel played in his close race against Tallahassee mayor Andrew Gillum in Floridan’s gubernatorial election last November. DeSantis edged out the hardcore progressive Democrat by a mere 0.4 percent, or 32,000 votes. DeSantis made the remark during the course of his official visit to Israel last week. He led a massive trade mission of Florida business leaders, cabinet secretaries, and university presidents on a five-day trip to the Jewish state. During the course of the mission, Florida universities signed collaboration agreements with Israeli universities spanning a vast spectrum of undertakings from water purification to space research. The mission merged the twin goals of increasing Florida-Israel economic, academic and commercial ties; and fighting anti-Semitism generally, and the BDS campaign against Israel specifically. Its success was a stunning expression of DeSantis’s state government’s friendship with Israel. It also placed the sharp contrast between progressive Democrats — like his opponent, Gillum — and DeSantis in stark relief. Throughout his three terms in Congress, DeSantis distinguished himself as one of the most active defenders and promoters of the U.S. strategic alliance with the Jewish state. In contrast, in the years preceding Gillum’s general election run for Florida governor, he cultivated and benefitted from close ties with BDS groups... DeSantis should go after the Red Flag Law also.
https://www.frontpagemag.com/fpm/273943/ron-desantis-challenges-bds-movement-caroline-glick
.
Top military commander:
Iranian threat is ‘imminent’ 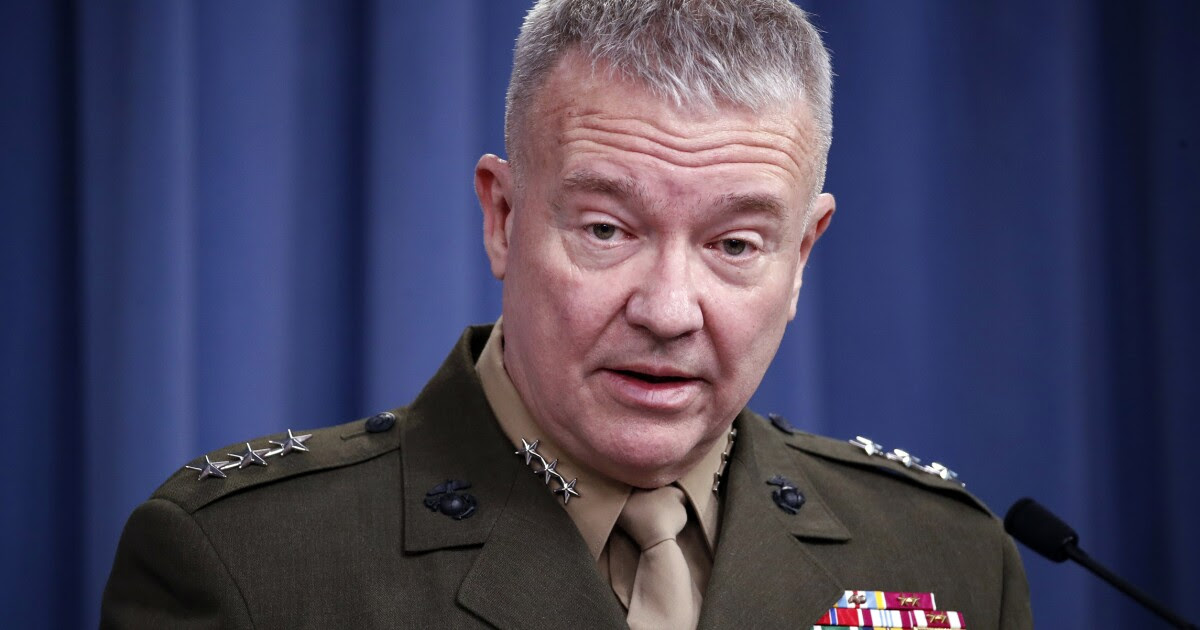 by Zachary Halaschak
{ washingtonexaminer.com } ~ The top commander for military forces in the Middle East says an attack from Iran or its affiliates could come at any time... “I think the threat is imminent,” Marine Gen. Frank McKenzie told NBC News. “We continually evaluate our force posture in the region.”Citing potential threats from Iran and its proxies, the military deployed the USS Abraham Lincoln Carrier Strike Group and a bomber task force to the Middle East region last month. The increased military presence comes at the same time the U.S. continues to exert a “maximum pressure” campaign against the regime, targeting its financial industry. McKenzie said that despite the increased military presence, the threat has not diminished. “I don't actually believe the threat has diminished,” McKenzie said. “I believe the threat is still very real.” “I would say the threat has probably evolved in certain ways even as our defensive posture has changed and become more aggressive,” he added. In June, attacks blamed on Iran hit two Saudi Arabian oil tankers, a UAE bunker barge, and an oil-products tanker registered out of Norway. Pumping stations in Saudi Arabia were also hit by drone strikes last month and a rocket of the same model used by Iran was detonated near the U.S. Embassy in Iraq.
https://www.washingtonexaminer.com/news/top-military-commander-iranian-threat-is-imminent?utm_source=breaking_push&utm_medium=app&utm_campaign=push_notifications&utm_source=WEX_Breaking%20News%20Alert_06/07/2019&utm_medium=email&utm_campaign=WEX_Breaking%20News&rid=5261
.
With Friends Like These…56 Countries
Violating UN’s North Korea Sanctions 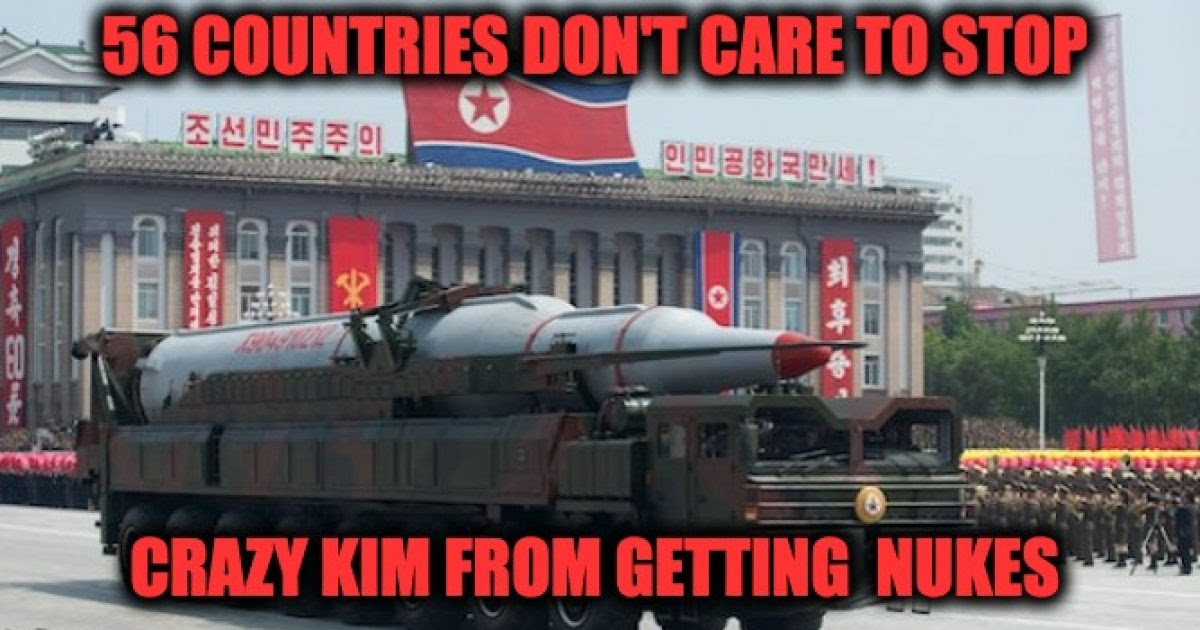 by patrioticfreedomfighter.com:  Things seem to finally take a turn for President Donald Trump on Monday after a federal judge rejected the Democrat-controlled House of Representatives’ lawsuit... to stop him from using emergency powers to build a wall along the U.S.-Mexico border. The rejection of the lawsuit came from Judge Trevor N. McFadden of the U.S. District Court for the District of Columbia. Judge McFadden, who was appointed by the President, said in his ruling that the House could not show that it had suffered the sort of injury that gave it standing to sue. Currently, Judge McFadden’s ruling will not have too much of an effect on the border situation now due to the fact that rulings from trial judges do not set binding precedents. In addition, other groups have already secured an order to block the President from proceeding with his plans for the wall. However, that could all change soon if other courts accept Judge McFadden’s decision based on his reasoning, which will significantly reduce the litigation options the House will have on this issue. Judge McFadden indicated that courts should only be called upon to resolve disputes between the two branches only as a last resort. “Congress has several political arrows in its quiver to counter perceived threats to its sphere of power to expressly restrict the transfer or spending of funds for a border wall,” said McFadden. “As it has recently shown, the House is more than capable of investigating conduct by the executive. These tools show that this lawsuit is not a last resort for the House.” The ruling by Judge McFadden, however, is in opposition to a 2015 decision from Judge Rosemary M. Collyer, who was appointed by President George W. Bush to the Federal District Court in Washington. Judge Collyer ruled that the Republican-controlled House had the right to challenge spending under scumbag/liar-nObama’s Affordable Care Act. The House argued that suing the White House was the only way they had available to preserve its constitutional given power that allowed them to control federal spending — as well as the administration’s intent to distribute $136 billion to insurance companies for subsidies. Judge McFadden, however, did limit the scope of his reasoning in this case by indicating that courts may weigh in on disputes between the other two branches arising from congressional subpoenas. “Using the judiciary to vindicate the House’s investigatory power is constitutionally distinct,” McFadden added. “The investigatory power is one of the few under the Constitution that each house of Congress may exercise individually. It is perhaps for this reason that the House’s power to investigate has been enforced with periodic help from federal courts.”
https://www.patrioticfreedomfighter.com/2019/06/06/trump-wins-ruling-in-houses-border-wall-lawsuit/
.
Hate Fest in Canada, Times Square

by Raheel Raza
{ clarionproject.org } ~ Where is the outcry against this hate fest? You might expect to see signs calling for the massacre of Jews on the streets of Tehran or Gaza City. But last Friday... May 31, 2019, they showed up in downtown Toronto in the presence of 100 police officers who did nothing to stop them. Similar sentiments were expressed in New York’s Times Square the same day. What was the occasion? The Al Quds Day hate fest, held annually on the last Friday of Ramadan. Al Quds, or Jerusalem, Day was initiated by the late Ayatollah Khomeini, founder of the Islamic Republic of Iran in 1979, ostensibly to express support for the Palestinians and oppose Zionism and Israel. The day is “celebrated” in a number of countries around the world, replete as was Toronto’s with flags of Iran and its Lebanese terror proxy Hezbollah. In the West, this hate fest used to be held on government properties, but some governments, aware of the day’s content, have balked, so the organizers have moved the location to the public sphere — usually in front of the US Embassy. This is where the 2019 Al Quds Day rally was held last week in Toronto, where event organizers take their cues from the Muslim Brotherhood playbook of hate. Most of the participants are bused to the location to raise their voices in support of Palestine, but numerous times we have sneaked into the rallies and asked the participants if they knew what the actual issues are. Not surprisingly, we found they have absolutely no idea as the majority are Pakistani, Bangladeshi and Indian Muslims as well as ultra-Left stooges...  https://clarionproject.org/hate-fest-in-canada-times-square/?utm_source=Clarion+Project+Newsletter&utm_campaign=44580254b4-EMAIL_CAMPAIGN_2019_03_17_12_03_COPY_02&utm_medium=email&utm_term=0_60abb35148-44580254b4-6442509&mc_cid=44580254b4&mc_eid=b83b13a9b5
.

.
Surprise — China Is a Big Polluter

Political Editors:  “As the U.S. backs away from climate pledges, India and China step up,” CBS News declared in 2017 following President Donald Trump’s decision to withdraw from the dubious Paris Accord. Bloomberg took it a step further, pointedly claiming, “China, Germany Step Up as U.S. Retires from World Leadership.” Well, it’s one thing to sign a pledge; it’s another thing entirely to follow through on it.

Recently, scientists discovered the source of a globally banned ozone-depleting gas that has been emanating into the atmosphere at an alarming rate. The chemical Trichlorofluoromethane, or CFC-11, has been banned across the globe for the past 30 years. However, since 2013 scientists have noticed increasing levels of CFC-11 in the atmosphere, and now the leading culprit has been discovered — China.

A study published last month by scientists from the universities of Bristol, Kyungpook National, and the Massachusetts Institute of Technology determined that 40% to 60% of the total global CFC-11 emissions came from eastern China. Talk about stepping up to lead the world … in polluting the planet.

The Washington Examiner notes, “Recent news suggests that if the U.S. were to regulate emissions more strictly, it wouldn’t be following China, but would be sending lots of manufacturing toward China, which would hurt both the planet and American interests around the world.” The Leftmedia won’t tell you that, though. Reporters would rather moralize and lecture against everything Trump does.  ~The Patriot Post