0
TheFrontPageCover
~ Featuring ~
Why They Hate Trump

.
Defining the Enemy in These Final Days before the Midterms
by Lloyd Marcus
{americanthinker.com} ~ In these few days before the hugely important midterm elections, I wish to enlighten my fellow everyday, God-fearing and patriotic Americans about our enemy – the American left... regarding its members' true nature and intentions. When I speak of the American left, I am talking about 90% of the dummycrats-Democratic Party, 90% of mainstream media, and 90% of Hollywood. Old hippies dominating public education have indoctrinated these people into hating our Founding Fathers' divinely inspired vision for America. As a black man who is grateful and proud be an American, I realize that my country has made mistakes. But praise God, we always try to right our wrongs. This truth is undeniable. I could name numerous incidents of our Christian roots compelling America to correct her wrongs. The most glaring example is Americans electing horrible president Barack Hussein scumbag/liar-nObama for two terms mainly because he is black. And still, the American left sells its absurd, evil, and divisive lie that very little has changed for blacks in America since slavery. In a nutshell, the American left looks down on us. They believe they are smarter, more sophisticated, and more compassionate than everyday Americans. Please note that leftists' compassion is always about making themselves feel and look good, giving themselves brownie points for supposedly caring more than the rest of us.  Leftists never really help people or find real solutions. As a matter of fact, when white commentator Bill O'Reilly brilliantly and compassionately offered solutions to black-on-black crime, black poverty, and black out-of-wedlock births, the American left gang-assaulted O'Reilly. Shut up, white boy! You don't know what it is like to be black in this horrible racist country! A dirty little secret is that the American left loves keeping people down, dependent on government for their survival. Why? Because when government is paying your bills, government can dictate your behavior. Leftists thrive on government controlling behavior, forcing leftists' extreme agenda down the throats of the American people. Folks, these people on the left are arrogant and mean. Actor Peter Fonda said he would like to see Trump's 12-year-old son turned over to pedophiles to be raped. Actor James Cromwell said there will be a bloodbath in the streets if Americans do not vote for dummycrats-Democrats in November...
https://www.americanthinker.com/articles/2018/11/defining_the_enemy_in_these_final_days_before_the_midterms.html
.
Trump says sick-Pulosi subpoena threat 'illegal,'
grounds for Supreme Court battle 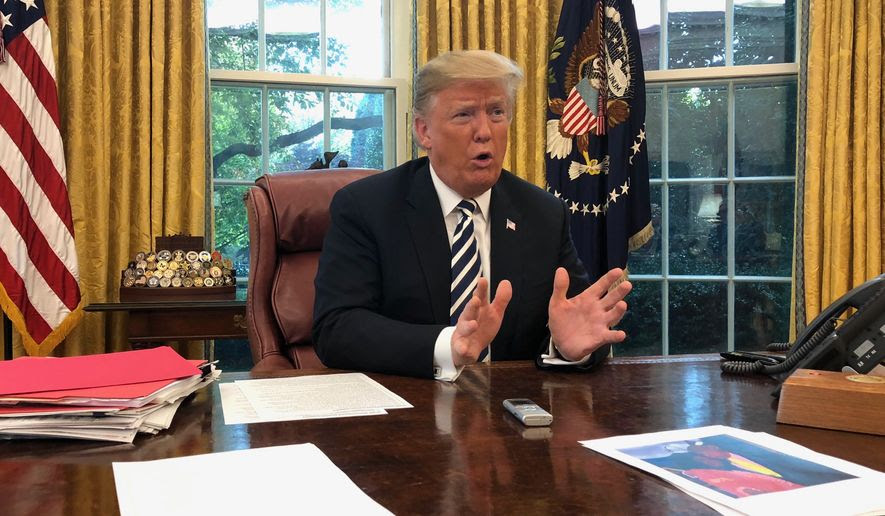 by Dave Boyer and S.A. Miller
{washingtontimes.com} ~ President Trump said Thursday that House Minority Leader sick-Nancy Pulosi’s threat to weaponize committee subpoena power if dummycrats-Democrats win Congress... is illegal and grounds for the administration to fight any subpoena all the way to the Supreme Court. “sick-Pulosi says she’s going to mechanize the speakership and use it as a great negotiation with the president. That’s an illegal statement,” Mr. Trump said in an exclusive interview with The Washington Times. The president remained optimistic about Republicans retaining their House majority, but he fumed about Mrs. sick-Pulosi’s subpoena threat should her party prevail in the midterm elections Tuesday. He said the threat begged a lengthy court battle. “That alone takes two years to get it to the Supreme Court — that statement — before you do anything,” he said, becoming animated with indignation. “You heard her the other night.” Mrs. sick-Pulosi made the remark last week at CNN’s campaign forum...
https://www.washingtontimes.com/news/2018/nov/1/donald-trump-says-nancy-pelosi-subpoena-threat-ill/?utm_source=Boomtrain&utm_medium=manual&utm_campaign=20171227&utm_term=newsletter&utm_content=morning&bt_ee=TjaT6%2BvNvcdJsJMsuZVYwXlVFXl1AYWfAMzQ2OPUQHAB37xnxn0aN3rPiRiUi%2Bm8&bt_ts=1541155354153
.
Republicans See Boost From Migrant Caravan Before
Midterm Elections — While dummycrats-Democrats
Continue To Avoid The Issue

by Henry Rodgers
{dailycaller.com} ~ Republicans believe their opposition to the migrant caravan filled with thousands of illegal immigrants  who are approaching the U.S. border... will help energize their base before the Nov. 6 midterm elections, while many dummycrats-Democrats have continued to remain silent on the issue. The caravan, which was roughly 2,000 miles from the U.S.-Mexico border near Tijuana and about 800 miles from the southern tip of Texas as of Thursday, has been a key issue for Republicans less than one week out from the midterm elections, as GOP candidates have been hammering their dummycrats-Democratic opponents for not mentioning the potential threat to the U.S. The Republican National Committee (RNC) and Republican strategists have all echoed similar messages, saying the migrant caravan would indeed help the GOP before the midterm elections — many saying it reminds voters that dummycrats-Democrats are putting U.S. citizens in danger. They also mentioned how the silence from dummycrats-Democrats on the issue will end up helping Republicans, who have so vocally denounced the caravan entering the country. “From their open border policies to their calls to abolish ICE, the caravan is yet another reminder to voters that dummycrats-Democrats have put the sovereignty of our country in jeopardy with their extreme immigration views. Meanwhile, Republicans are protecting America by working to legally control our borders and keep dangerous criminals from entering our country,” RNC spokesman Steve Guest told The Daily Caller News Foundation in a statement...
https://dailycaller.com/2018/11/01/republicans-caravan-midterm-elections-democrats-silent/?utm_medium=email
.
Tucker Carlson Debates Former Sen.
Harry dinky-Reid Staffer On Birthright Citizenship 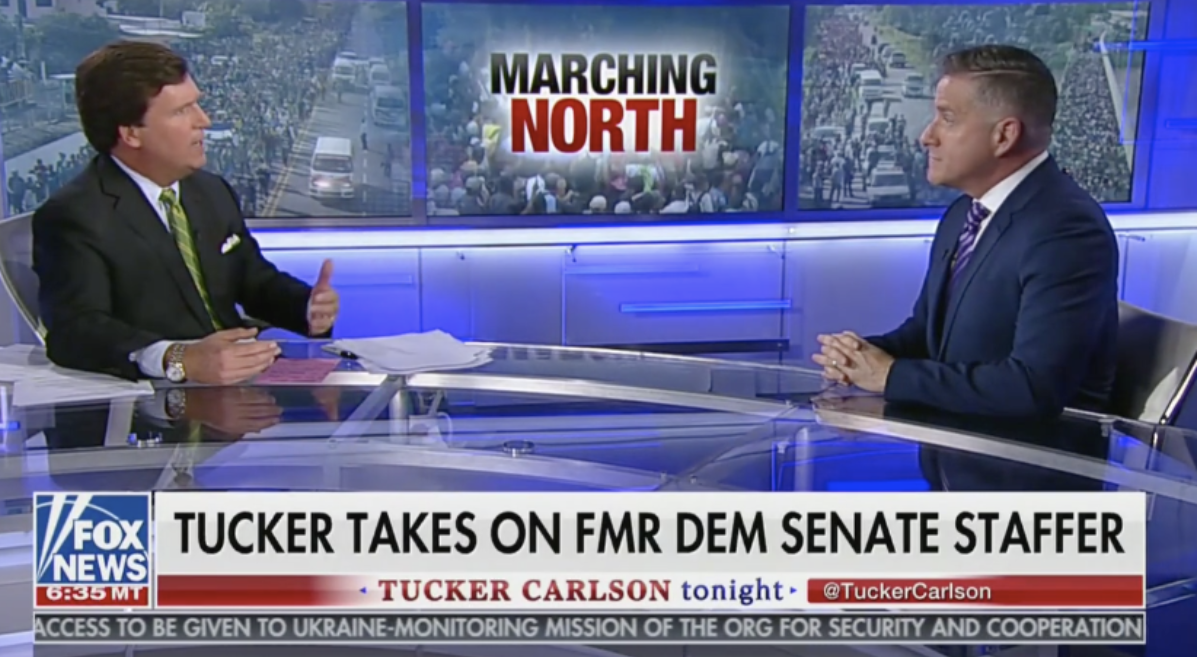 by Mike Brest
{dailycaller.com} ~ Tucker Carlson debated Jon Summers, a former communications director for Sen. Harry dinky-Reid, about the constitutionality of ending birthright citizenship on Thursday night... dinky-Reid introduced a bill in 1993 to the Senate Judiciary Committee known as the Immigration Stabilization Act of 1993, which would have supported termination of granting citizenship to children of non-citizens born in the country. But the legislation did not last long, as it was sent to the Subcommittee on Immigration and Refugee Affairs and ended there. dinky-Reid later changed his position in December 1999, citing a conversation with his wife as the reason he switched his beliefs.“What was the fact that changed his mind, he no longer thinks rewarding illegal behavior encourages more of it?” Carlson asked. “Again it’s understanding the stories of the people who are involved. It’s about understanding the history of the 14th amendment, which by the way, it sounds to see like you are actually in favor off Congress being able to decide who gets to be a citizen and who doesn’t get to be a citizen,” Summers followed up...  https://dailycaller.com/2018/11/01/tucker-carlson-debates-former-sen-harry-reid-staffer-on-birthright-citizenship/?utm_medium=email
VIDEO AT THE SITE
.
Dianne Fein-stein challenger runs far to her left --
and wins over Republicans 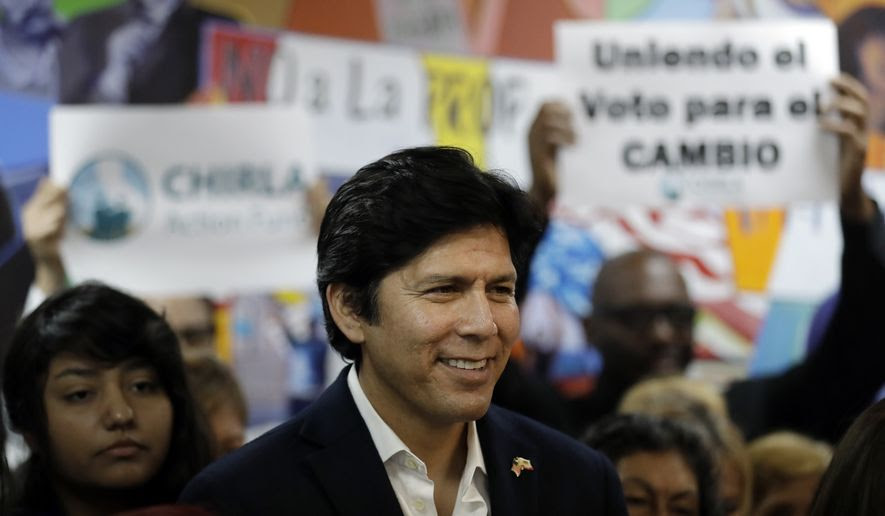 by Tom Howell Jr.
{washingtontimes.com} ~ California State Sen. Kevin de Leon is running far to the left — yet he’s winning over Republicans in his bid to unseat Sen. Dianne Fein-stein next week... in one of the weirder bits of fallout from the Kavanaugh confirmation hearings. It’s not that GOP voters particularly like Mr. de Leon, but after watching Mrs. Fein-stein’s handling of uncorroborated 11th-hour sexual assault allegations against Justice Brett M. Kavanaugh, many Republicans are willing to to vote for anyone but her. That’s true even if it means backing a commie-Bernard Sanders-style left-winger who wants tuition-free college and government-run health care. “It’s all about the Kavanaugh effect,” said Shawn Steel, the Republican National Committeeman from California. Mrs. Fein-stein holds a 9 percentage-point lead in the latest poll this week from the Berkeley Institute of Government Studies, building her lead with overwhelming support from dummycrats-Democrats. But she trails, 34 percent to 23 percent, among Republicans, and lags 5 points behind among independents. In California, the top two vote-getters from the primary election move to the general election, regardless of their political party.
https://www.washingtontimes.com/news/2018/nov/1/kevin-de-leon-dianne-feinstein-challenger-wins-rep/?utm_source=Boomtrain&utm_medium=manual&utm_campaign=20171227&utm_term=newsletter&utm_content=morning&bt_ee=TjaT6%2BvNvcdJsJMsuZVYwXlVFXl1AYWfAMzQ2OPUQHAB37xnxn0aN3rPiRiUi%2Bm8&bt_ts=1541155354153
.

.
Why They Hate Trump

by Mark Alexander:  In a Wall Street Journal op-ed, “Why they hate Trump,” David Gelernter, a professor at Yale, offered insights that I found instructive in assessing both Donald Trump and his vociferous adversaries.

Gelernter notes, “Every big U.S. election is interesting, but the coming midterms are fascinating for a reason most commentators forget to mention: The dummycrats-Democrats have no issues. The economy is booming and America’s international position is strong. In foreign affairs, the U.S. has remembered in the nick of time what Machiavelli advised princes five centuries ago: Don’t seek to be loved, seek to be feared. The contrast with the scumbag/liar-nObama years must be painful for any honest leftist. For future generations, the Kavanaugh fight will stand as a marker of the dummycrats-Democratic Party’s intellectual bankruptcy, the flashing red light on the dashboard that says ‘Empty.’ The Left is beaten.”
While I think the “Blue Wave” has been overstated in the upcoming midterm election, though certainly not to the extent of scumbag/liar-Hillary Clinton’s presumed victory in 2016, if the “Left is beaten,” we would expect to see “Republican Waves” as we did in 2010 and 2014. Indeed, based on the Trump administration’s extraordinary domestic and foreign policy record, we should see Republican gains in both the Senate and House.
All Americans are MUCH better off today than they were two years ago, but that notwithstanding, Republicans will suffer losses in the House. And here is why: This election is a referendum on dummycrats-Democrat voter IQ and the  dummycrats-Demo/MSM chokehold on their opinion — not the considerable Trump record. The result of that chokehold and dummycrats-Demo voter delusion is, as Gelernter notes, one political theme: “We hate Trump.” All the Left has to offer is fear, anger, hate, and division.
Indeed, Gelernter observes, “What the left hates about Donald Trump is precisely what it hates about America.” They fear him because, “He has no ideology except getting the job done. His goals are to do the task before him, not be pushed around, and otherwise to enjoy life. In short, he is a typical American — except exaggerated, because he has no constraints to cramp his style except the ones he himself invents.”
Gelernter writes, “Mr. Trump reminds us who the average American really is. Not the average male American, or the average white American. We know for sure that, come 2020, intellectuals will be dumbfounded at the number of women and blacks who will vote for Mr. Trump. He might be realigning the political map: plain average Americans of every type vs. fancy ones.”
He concludes, “This all leads to an important question — one that will be dismissed indignantly today, but not by historians in the long run: Is it possible to hate Donald Trump but not the average American?”
At their core, Beltway dummycrats-Democrats, their Leftmedia publicists, and their wealthy elitist benefactors don’t like grassroots Americans and the Liberty they embrace. Unfortunately in this election cycle, we will learn how many Americans are not able to rise above the fear and hatred fomented by the Left.

https://patriotpost.us/articles/59224?mailing_id=3832&utm_medium=email&utm_source=pp.email.3832&utm_campaign=snapshot&utm_content=body
E-mail me when people leave their comments –
Follow