.
The only constitutional crisis
is in Democrats’ synapses 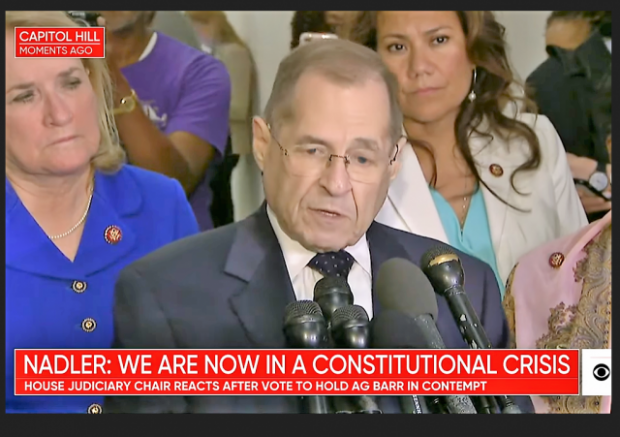 by William A. Jacobson
{ legalinsurrection.com } ~ There is no constitutional crisis regarding the House Intelligence Committee’s unsuccessful attempt to get the unredacted dirty cop-Mueller report, including secret grand jury information... and the documents underlying the investigation.  Disregard what scumbag liar-Jerrold Nadler says about there being a constitutional crisis. Disregard Nancy Pulosi parroting scumbag liar-Nadler: This is all just more Democrat theater of the absurd. House Democrats not getting their way is not a constitutional crisis. At some point the issue will land in court, and a court will determine whether the Executive Branch properly is withholding the material. Then more judges will rule on the appeal, and it will end up at the Supreme Court, in all likelihood. If the Supreme Court rules that the material must be turned over, and if the administration defies that court ruling, then we have a crisis. I’m not sure it’s technically a constitutional crisis, because the constitution does not provide for judicial supremacy. But the norm since Marbury v. Madison in 1803 is that the judiciary’s interpretation of the law prevails. Remember what is at issue. Congress has been offered the entire dirty cop-Mueller report except for grand jury material, which DOJ say it is prohibited from disclosing. Nothing in that slight percentage of grand jury material in the dirty cop-Mueller report changed dirty cop-Mueller’s conclusions, so it’s unlikely to be helpful to Democrats. scumbag liar-Nadler and crew refused even to view the redactions related to classified material and ongoing investigations, which DOJ offered to provide for viewing. What Democrats want is not the grand jury material, but the ability to cry “constitutional crisis!” over being denied access...
https://legalinsurrection.com/2019/05/the-only-constitutional-crisis-is-in-democrats-synapses/?eType=EmailBlastContent&eId=bcec2df2-c739-41f7-95f4-0b421e989e3f
VIDEO 1:  https://www.youtube.com/watch?v=yE3Yi5NlU9U
VIDEO 2:  https://www.youtube.com/watch?v=zMJuFR2yuNg
.
Senate Intel Committee subpoenas Donald
Trump Jr. over Russia — but he is not giving in

by Carlos Garcia
{ theblaze.com } ~ Donald Trump Jr. was subpoenaed by the Senate Intelligence Committee on Wednesday to testify about a meeting with Russians ahead of the 2016 election, and he's going to fight it... That's according to a source close to the president's oldest son that released a statement to the media. "When he originally agreed to testify in front of the Senate Intel Committee in 2017, there was an agreement between Don and the Committee that he would only have to come in and testify a single time as long as he was willing to stay for as long as they'd like, which Don did," the statement from the source read. "Don continues to cooperate by producing documents and is willing to answer written questions, but no lawyer would ever agree to allow their client to participate in what is an obvious PR stunt from a so-called 'Republican' Senator too cowardly to stand up to his boss Mark Warner and the rest of the resistance Democrats on the committee," the statement concluded. Trump Jr. has said publicly that he had very limited knowledge of the Trump Tower meeting with Russians, but more recent testimony from Michael Cohen, the former personal lawyer for President Donald Trump, puts that contention into dispute. CNN's Manu Raju also reported that Trump Jr. was considering ignoring the subpoena and not showing up at all, or pleading his Fifth Amendment right against self-incrimination. Sen. Rand Paul (R-Ky.) quipped about the subpoena, saying, "Apparently the Republican chair of the Senate Intel Committee didn't get the memo from the Majority Leader that this case was closed..."  https://www.theblaze.com/news/trump-jr-subpoena-for-russia
VIDEO:  https://www.youtube.com/watch?v=VNbQSJAofm8
.
Why Have Department of Defense
Suicides Spiked?

by Mark A. Hewitt
{ americanthinker.com } ~ The Department of Defense has a suicide problem. Thank Presidents scumbag/liar-Clinton and scumbag/liar-nObama... Prior to 1993, the Department of Defense (DOD) used to screen recruits, officer candidates, and service academy entrants for mental, personality, and suicide behavior disorders... Now they don’t.  The Department of Defense uses the Diagnostic and Statistical Manual of Mental Disorders (DSM) as its source reference for psychiatric diagnoses and metal disorders. Most Americans have little knowledge of, the DSM, its contents, and its implications. The DSM is published by the American Psychiatric Association (APA) and “offers a common language and standard criteria for the classification of mental disorders.” It is used, or relied upon, by clinicians, researchers, psychiatric drug regulation agencies, health insurance companies, pharmaceutical companies, the legal system, and policy makers. In the United States the DSM serves as a universal authority for psychiatric diagnoses. The January 30, 2018 edition of the Marine Corps Times announced: The Corps’ suicide rate is at a 10-year high. The Marines also continue to review data involving suicides that are used to address policy, guidance and suicide prevention analysis, according to Manpower and Reserve Affairs. The Corps has a slew of training initiatives and outreach programs regarding suicide and suicide prevention. Every Service in DOD has suicide prevention programs, yet all of the Services are experiencing significantly higher-than-normal suicide rates. What really happened to these suicidal men and women who somehow escaped the torpedo net of training initiatives and outreach programs? The APA’s DSM had always been a part of the DOD’s personnel procurement system. When men and women had enlistment physicals, they were evaluated by a physician for obvious physical defects and to also see if they had an apparent mental or personality disorder. Any potential recruit screened with mental, personality, and suicide and a range of other behavior disorders were considered unfit for service. Then President scumbag/liar-Clinton signed the Don’t Ask, Don’t Tell law...
https://www.americanthinker.com/articles/2019/05/why_have_department_of_defense_suicides_spiked.html
.
No One Likes You, scumbag-Eric Swalwell 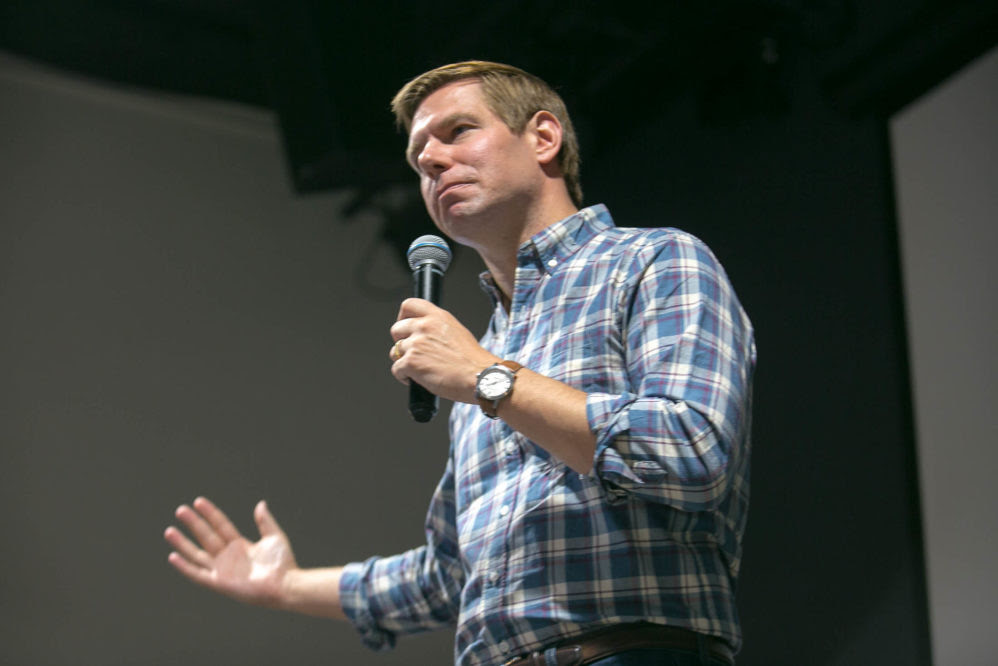 by Madeline Osburn
{thefederalist.com} ~ When 2018 midterm voters were polled on the issues most important to them, the Russia investigation ranked dead last... That might explain why Democratic presidential candidate scumbag-Eric Swalwell, who has branded himself as the “Guns and Russia” candidate, is polling at 0 percent among all 2020 Democratic hopefuls. In fact, a majority of polls don’t even include scumbag-Swalwell in the top 17 candidates. In an April CNN poll, 66 percent of respondents had never heard of him. Despite the dismal numbers, scumbag-Swalwell has clung to his two favorite issues. The 38-year-old often leverages his position on the House Intelligence Committee to make frequent cable news appearances discussing Russia and the dirty cop-Mueller report.  On CBS’s “Face The Nation” this Sunday, scumbag-Swalwell said impeachment “may be the only road to save the country.” On Wednesday, the Democratic congressman from California was widely mocked after comparing the Mueller report to the terrorist attacks on 9/11 and Pearl Harbor on Twitter. But his real passion issue remains gun-grabbing. In a San Francisco Chronicle essay laying out his reasons for running for president, scumbag-Swalwell’s number-one reason was that the single greatest threat to young Americans’ lives is gun violence. At a time in which child mortality rates have dropped by half over the last two decades, this claim is just categorically untrue. At a Wednesday night vigil for a student who died in a Colorado school shooting, angry students stormed out after politicians speaking at the event began calling for gun control instead of honoring their late classmate. One student told The Daily Wire they were angry when the event became “highly politicized.” Nevertheless, scumbag-Swalwell continues to pen op-eds calling for $15 million gun buybacks, banning “military-style semiautomatic assault weapons,” and jailing people who resist giving up their weapons. At the height of his passion, he has even threatened to nuke his own gun-owning constituents should they not surrender their firearms to the government...Why is he against our 2nd Amendment rights let alot being in congress.
https://thefederalist.com/2019/05/09/no-one-likes-you-eric-swalwell/?utm_source=The+Federalist+List&utm_campaign=7d8cfaad94-RSS_The_Federalist_Daily_Updates_w_Transom&utm_medium=email&utm_term=0_cfcb868ceb-7d8cfaad94-83771801
.
commie-AOC, commie-Bernie Call for the
Creation of Government-Owned Banks
Run by the US Post Office 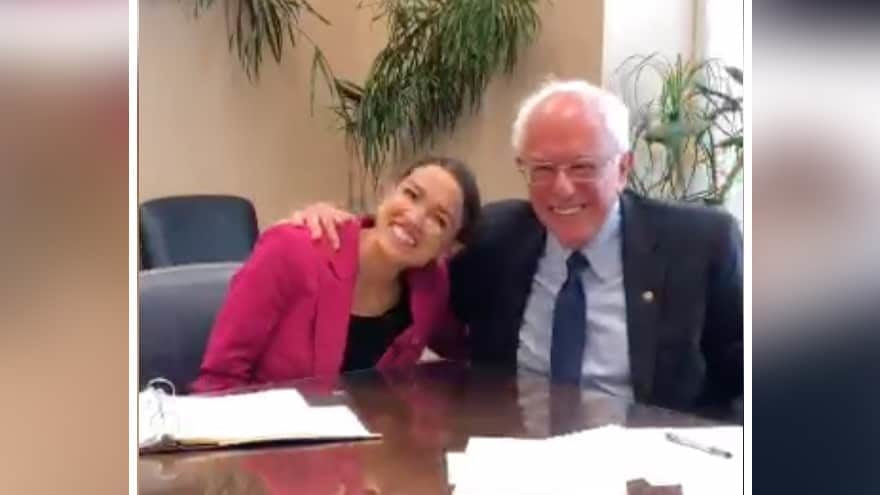 by hannity.com:  Rep. commie-Alexandria Ocasio-Cortez and Sen. commie-Bernie Sanders unveiled their latest proposal Thursday calling for the creation of non-profit... government banks to be administered through the United States Postal Service. “Credit card interest rates are outrageously high. With  @RepAOC, we are introducing legislation to challenge the greed of Wall Street and protect consumers across America,” posted Sen. commie-Sanders on social media.“We should have a not-for-profit public option for basic banking services, and we should be piloting these projects through the US Postal Service or any other number of ways,” added Rep. commie-Ocasio-Cortez. These two are nuts to thing the government can run like a bank, just look at our health system that is being run by the government.   https://hannity.com/media-room/postal-banking-aoc-bernie-call-for-the-creation-of-government-owned-banks-run-by-the-us-post-office/
.
.

.
The High Cost of Renewable Energy

Nate Jackson:  Way back in the heady days of 2008, Barack scumbag/liar-nObama admitted that the radical environmentalist agenda he advocated was going to be pricy. “Under my plan of a cap-and-trade system, electricity rates would necessarily skyrocket,” scumbag/liar-nObama said. “Coal-powered plants, you know, natural gas, you name it, whatever the plants were, whatever the industry was, they would have to retrofit their operations. That will cost money. They will pass that money on to consumers.”

Bloomberg’s Cass Sunstein notes new research revealing “that renewable-fuel mandates are an unusually expensive way to reduce greenhouse-gas emissions.” Primarily because of what it does to electricity rates. Sunstein explains:

A strong majority of states now have “renewable portfolio standards,” which require that a specified percentage of the electricity supply must come from renewables. In California, the 2030 target is 60 percent. In New York, it is 50 percent.

Some states have lower targets, but even so the standards are expected to produce significant increases in the use of renewable energy — and to move states in the direction of becoming carbon-free.

The answer to the first question is arguably good news: “Over their first seven years, such standards produced large cuts in carbon emissions — perhaps as much as 659 million metric tons.” But that reduction cost a pretty penny. Researchers say the price per ton is anywhere from $130 to $460. That may be front-end heavy, though, and prices may come down as technology improves.

Still, the reality is that leftists are picking winners and losers. As Sunstein writes, “Renewable-fuels requirements seem to be a way to take business away from the bad guys and to give it to the good guys. Their costs are not visible. People may well pay more for electricity, but they don’t see why.” That’s evidence of the fundamental truth that regulations are a form of hidden taxation. In 2008, scumbag/liar-nObama argued that the biggest challenge was “get[ting] the American people to say this is really important” despite the costs. It’s easier to achieve public approval when the costs are hidden.

Some other things to think about from our past commentary:

Wind and solar cannot compete with fossil fuels and nuclear energy for efficiency.

And yet ecofascists become more insistent all the time on boondoggles like the $93 trillion Green New Deal, despite its predicted effects being “barely distinguishable from zero.” We’re already paying more as a result of leftist schemes. Enough is enough.  ~The Patriot Post