.
Justice Thomas TIRED OF DEMOCRAT SJW,
Black Victim Culture – NOT How He Grew Up

by rickwells.us
{ rickwells.us } ~ Justice Clarence Thomas discusses his challenges in life and the influence his grandfather had on him in dismissing the petty... counterproductive victimization culture of the country today. Thomas talks of an encounter he had recently with a young black woman in Kansas recently, who he says said something that he found really interesting. She said, “I’m really tired of having to play the role of being black. I just want to go to school.” He says, “And I think we, at some point we’re going to be fatigued with everybody being a victim. When I was a kid there were tons of people who were in really bad circumstances. My grandfather would not let us wallow in that.” He goes on to describe his grandfather as his hero and the single greatest human being he has ever met...  https://rickwells.us/thomas-weary-dem-victimization/
VIDEO:  https://www.youtube.com/watch?v=ZJIPICIXdpg
.
Mueller Indicts 13 Russian Nationals
Involved In Election Interference

by CHUCK ROSS
{ dailycaller.com } ~ According to the indictment, signed by Special Counsel Robert Mueller... the Russian nationals began conspiring as early as 2014 to interfere “with the U.S. political and electoral processes, including the presidential election of 2016.” Part of the scheme involved defendants posing as Americans and communicating “with unwitting individuals associated with the Trump campaign and with other political activists to seek to coordinate political activities.” In a press briefing held shortly after the indictment was announced, Deputy Attorney General Rod Rosenstein said that there was no allegation in the indictment that “any American” — including members of the Trump campaign — “was a knowing participant in the alleged unlawful activity.”... Agency Indicted list -https://www.scribd.com/document/371673494/Internet-Research-Agency-Indictment?irgwc=1&content=27795&campaign=VigLink&ad_group=1726779&keyword=ft500noi&source=impactradius&medium=affiliate
http://dailycaller.com/2018/02/16/mueller-indicts-13-russians/
.
History Lessons from Years Under Islamism 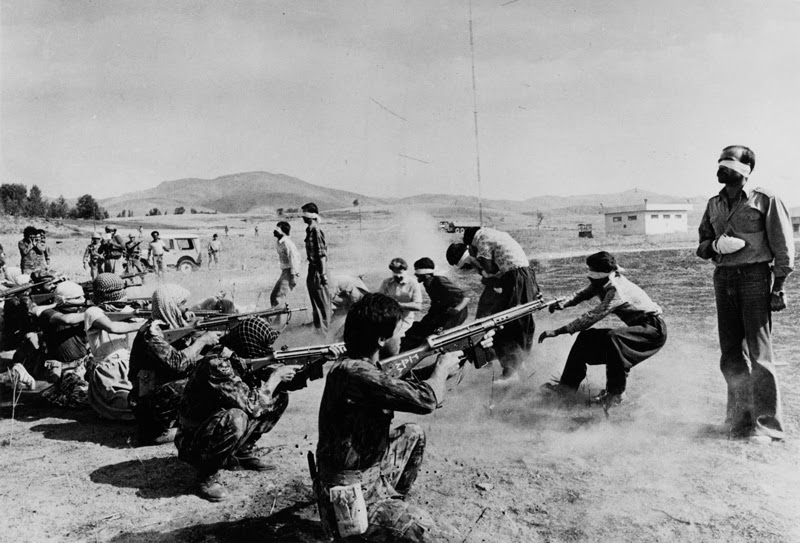 by Majid Rafizadeh
{ gatestoneinstitute.org } ~ In Iran, my generation, the first after Islamism came to power, is called the Burnt Generation (Persian: Nasl-e Sukhteh)... Our generation earned this name for having to endure the brutality of the Islamist and theocratic regime from the time we were born, to adulthood. This brutality included the regime's merciless efforts, such as mass executions, to establish its power, impose its barbaric and restrictive rules, and brainwash children and indoctrinate the younger generation with its extremist ideology through various methods including elementary schools,  universities, state-controlled media outlets, imams and local mosques, and promoting chants such as "Death to America" and "Death to Israel". Women and men were segregated. Teenagers were prevented from performing daily activities considered harmless by most of the world. Any kind of enjoyable social activities were barred, including listening to music, dancing, drinking, dating, women participating in a chess championship  unless you were wearing a hijab or attending a football match or other sporting event if men were playing in it. If it made you smile, if it gave you hope, it was probably against the law, such as what could be worn, whom you were allowed to talk to, what you could listen to, and whether or not you pray or fast during Ramadan. Even the most personal and private issues became the business of the regime's forces...  https://www.gatestoneinstitute.org/11889/iran-history-lessons
.
Sessions Wakes Up, Orders Rosenstein
To “Look Busy” On FL Massacre

by rickwells.us
{ rickwells.us } ~ It took the senseless murder of seventeen innocent people, fourteen of them children... but Attorney General Jeff Sessions has finally awakened from his deep slumber and is now springing into action as only he can. He’s once again ordered his establishment crony, Deputy AG Rod Rosenstein, to do the job he isn’t willing to do himself, that of Attorney General of the United States.  This time he didn’t bother with the recusal. We’ve understand, Mr. Attorney General, that you are a phony, a figurehead phantom who appears only for an instant and then is gone like a vapor. On Friday Sessions told Rosenstein to “conduct an immediate review” of both the Justice Department and FBI. That’s some real bravery on display, Mr. Attorney General. Given the obvious corruption that has been exposed over the past year, isn’t that something that should already be underway and nearing completion? Sessions referenced the exposure of the mishandling of tips that could have led to the apprehension of Douglass High School mass murderer Nikolas Cruz before he had the opportunity to kill so many innocent people...  https://rickwells.us/sessions-wakes-rosenstein-busy/
.
Jeffrey Lord: Indictment
'Beginning of the End' of Russia Probe
by Cathy Burke
{ newsmax.com } ~ The indictment from FBI special counsel Robert Mueller's investigative team is "the beginning of the end"... of its probe of possible collusion between the campaign of President Donald Trump and Russia, political strategist Jeffrey Lord said Friday. In an interview on Newsmax TV's Lord, who served as an associate political director in the administration of President Ronald Reagan, said critics of President Donald Trump will, nevertheless, still "try to politicize" the indictment against 13 Russians and three Russian companies accused of interfering in the 2016 election. "I don't think it will be too much longer" before the investigation ends, Lord said, calling the indictment "the beginning of the end, whatever that end will be . . . but I think there's a need for haste here." Lord said the Mueller probe "at some point" simply runs "out of gas on this," and declared the latest indictment shows "really, there's no there, there."...  https://www.newsmax.com/newsmax-tv/jeffrey-lord-robert-mueller-indictments-investigation/2018/02/16/id/843922/?ns_mail_uid=29878495&ns_mail_job=1779513_02172018&s=al&dkt_nbr=010504omn4d5
VIDEO:  https://www.newsmax.com/newsmax-tv/jeffrey-lord-robert-mueller-indictments-investigation/2018/02/16/id/843922/?ns_mail_uid=29878495
.

by Nate Jackson:  A study in contrasts. After the horrific mass murder in Florida Wednesday, the reactions from the two sides were predictable. Leftists opened their assault with the usual calls for gun control and vilely slandered those of us who disagree, while defenders of Liberty took a reasonable approach to rights, freedom and culture. Same as it ever was.

This contrast was highlighted particularly well by the current president and his predecessor.
“Caring for our kids is our first job,” liar-nObama tweeted Thursday. “And until we can honestly say that we’re doing enough to keep them safe from harm, including long overdue, common-sense gun safety laws that most Americans want, then we have to change.” liar-nObama’s clear message is that defenders of Liberty and the Second Amendment don’t “care for our kids,” and in fact that we’re preventing those who care from “doing enough” to keep kids safe. Notice too his subtle use of “gun safety laws” instead of gun control. Safety polls better.
We’d be more inclined to believe leftists want to keep kids safe if 1) their policies actually did so without infringing on the constitutional rights of law-abiding citizens and 2) they didn’t routinely exploit the blood of innocents to advocate those statist policies. Never mind their rabid defense of killing children in utero.
Reminder: liar-nObama and his fellow Democrats had complete control of Washington from 2009-2011, and they did nothing to pass these supposed “common sense” measures.
Striking an entirely different and more appropriate note, President Donald Trump addressed the nation yesterday and said, “No child, no teacher, should ever be in danger in an American school. No parent should ever have to fear for their sons and daughters when they kiss them goodbye in the morning. … In these moments of heartache and darkness, we hold on to God’s word in Scripture: ‘I have heard your prayer and seen your tears. I will heal you.’ … We must also work together to create a culture in our country that embraces the dignity of life, that creates deep and meaningful human connections, and that turns classmates and colleagues into friends and neighbors.”
Leftists have destroyed our cultural embrace of the dignity of life because they prefer to advocate rampant and damaging immorality, which breaks families and aborts children. And they’ve broken “meaningful human connections” because they instead pit identity groups against each other for political gain.
Guns have always been a part of American culture and Liberty. Hate, vice and licentiousness are things the Left has cultivated in the last 50 years. Whether it’s a typical weekend in any inner city across American or a mass murder like the one in Florida, we’re witnessing the horrific results.  ~The Patriot Post
https://patriotpost.us/articles/54197-guns-and-culture-two-presidents-reveal-the-divide