by sundance
{ theconservativetreehouse.com } ~ U.S. Attorney General Bill Barr gives his first media interview since taking office. Bill Hemmer interviews AG Barr in El Salvador on a wide variety of topics... Fox News has packaged the broadcast interview to begin with questions to the AG about the ongoing “review” of FBI and DOJ conduct in the election, ie “SpyGate”. The Attorney General explains how the primary aspects under review were conducted by a “small group” at the top of the institutions, and he was surprised to discover no-one had valid answers to his initial inquiry. The lack of cogent explanation furthered his concerns and led to his decision to appoint a prosecutor, U.S. Attorney John H Durham, to conduct a more thorough review. As you can tell the video was edited to run in a specific sequence. If you would prefer to listen to the interview, in its original form...
https://theconservativetreehouse.com/2019/05/17/attorney-general-bill-barr-gives-first-interview-full-interview/
VIDEO:  https://www.youtube.com/watch?v=sZBb8uMoqdI
Fox Radio:  https://radio.foxnews.com/2019/05/17/exclusive-sit-down-with-attorney-general-bill-barr/
.
Not To Keep Nit-Picking The
Garbage Mueller Report, But…

by uspoliticsandnews.com:  Special Counsel dirty cop-Robert Mueller dedicated an entire chapter of his 448-page report to how the GRU – Russia’s version of the CIA – hacked the DNC and John Podesta emails starting in March 2016... The allegation all along from the Democrats has been that Russia “hacked our democracy” to help the campaign of Donald Trump. The Russians were somehow so sophisticated that they knew Trump was going to win the Republican nomination three months later! There’s just one little problem with the whole “Russia hacked the DNC narrative.” It’s fake. This claim has no more basis in reality than the alleged pee tape that keeps Rachel Maddow of MSNBC awake at night. The DNC never allowed the FBI to examine its server, to determine whether it had been hacked or whether the emails on the server were stolen as part of an “inside job.” Former CIA and Department of Homeland Security experts who have examined the case say that it’s simply not possible for the “hack” to have originated in Russia. Yet dirty cop-Mueller goes into painstaking detail for dozens of pages, writing about how GRU used a sophisticated spear phishing attack to compromise IT workers’ computers and gain access to the DNC network. Where does dirty cop-Mueller get this information? His report never says. Never mind the fact that if dirty cop-Mueller’s assertions were true, those portions of his report would definitely have been redacted as classified materials. Instead, dirty cop-Mueller’s specific descriptions of when, where and how the GRU allegedly hacked the DNC are right out there in the open for everyone to see...
https://uspoliticsandnews.com/not-to-keep-nit-picking-the-garbage-mueller-report-but/
.
Pulosi Delivers Rambling Speech
on Immigration, Says ‘Merit Not Merit’ 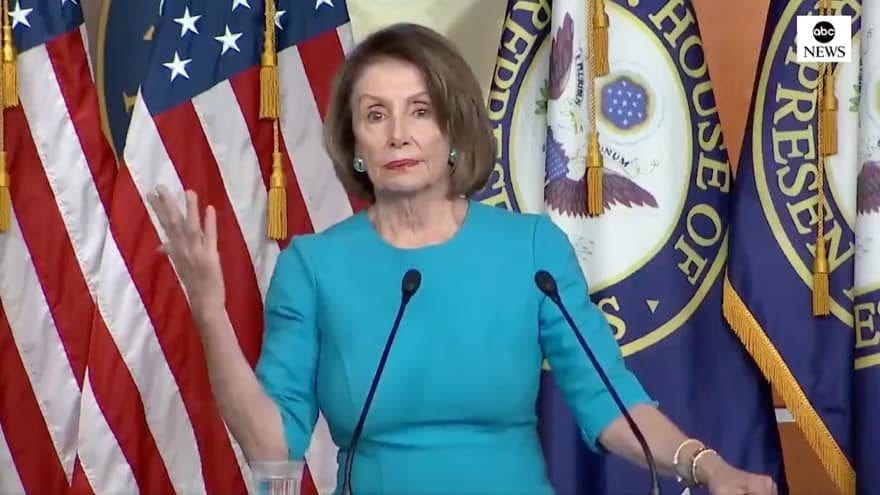 by hannity.com:  Speaker of the House Nancy Pulosi spoke with reporters at the US Capitol Thursday during her weekly press briefing... launching into a bizarre rant regarding President Trump’s latest merit-based immigration proposal. “I want to say something about the word that they use: Merit. It’s really a condescending word. Are they saying family is without merit? Are they saying most people that have ever come to the United States are without merit because they don’t have an engineering degree?” asked Pulosi. “We’ll see what values are reflected there. Merit, which is not merit. It means merit, in the eyes of Donald Trump,” she added. Pulosi’s comments come hours after Sen. Lindsey Graham unveiled a series of new proposals regarding the nation’s outdated immigration laws. The new legislation would end asylum claims at the US border but would permit individuals to request asylum at US embassies and consulates across Central America... You dems have not come up with any plan to deal with immigration but criticize the Republican plan.
https://hannity.com/media-room/whats-wrong-with-nancy-pelosi-delivers-rambling-speech-on-immigration-says-merit-not-merit/
.
House passes bill to include
LGBTQ protections in Civil Rights Act 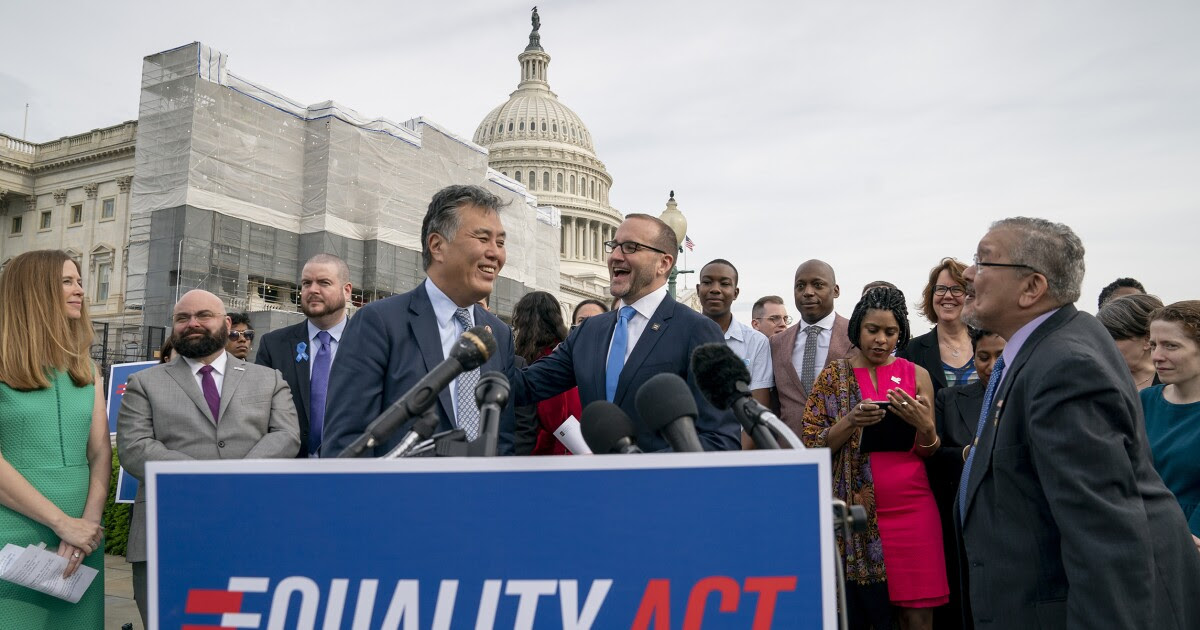 by Susan Ferrechio
{ washingtonexaminer.com } ~ The House Friday passed a bill that would amend the 1964 Civil Rights Act to include sexual orientation and gender identity, sparking a debate on the floor about religious liberty and women’s rights... Democrats believe the Civil Rights Act should be amended beyond current protections for race, color, religion, sex, and national origin. The Equality Act, passed 236-173 along party lines, would greatly expand non-discrimination protections for LGBTQ individuals to include not only the workplace, but also education, credit, jury service, federal funding, housing, and public accommodations. Democrats, who all support the measure, said it would, for the first time, broadly protect LGBTQ individuals from discrimination. “This is progress for America,” Speaker Nancy Pulosi, D-Calif., said just before the vote. But Republicans said the measure would undermine religious freedom, destroy Title IX programs for women, and undercut parental rights. Critics say it would require public schools nationwide to allow boys who identify as girls to compete competitively on girls teams, which would give them an unfair biological advantage over girls. Rep. Vicki Hartzler, R-Mo., said the measure would eliminate the level playing field provided under Title IX programs. “As a mother, teacher and former track coach, I’m deeply concerned about the implication of this bill, on and off the playing field,” Hartzler said. “High school female athletes will miss competitive opportunities because boys take home the medals.”... You dems are a bunch of jerks and have no care on all Americans.
https://www.washingtonexaminer.com/news/congress/house-passes-bill-to-include-lgbtq-protections-in-civil-rights-act?utm_source=breaking_push&utm_medium=app&utm_campaign=push_notifications&utm_source=WEX_Breaking%20News%20Alert_05/17/2019&utm_medium=email&utm_campaign=WEX_Breaking%20News&rid=5261
.
US Judge to Consider Bid to Block Trump’s Emergency Border Wall Funds

by Tom Hals
{ ijr.com } ~ U.S. President Donald Trump’s national emergency declaration to divert more than $6 billion to build a wall on the border with Mexico will face its first test in court on Friday... when states and advocacy groups are expected to ask a federal judge to block the funding. At the center of Friday’s hearing is the question of the president’s authority to construct a wall using funds that Congress declined to approve for the amount he requested. In February, Congress approved $1.375 billion for construction of “primary pedestrian fencing” along the border in southeast Texas, well short of Trump’s demand for $5.7 billion to build border walls in Arizona and New Mexico as well as Texas. To obtain the additional money, Trump declared a national emergency and diverted $601 million from a Treasury forfeiture fund, $3.6 billion from military construction and $2.5 billion earmarked for Department of Defense counterdrug programs. “Congress’s refusal to fund President Trump’s wall isn’t an emergency, it’s democracy,” said a statement from Dror Ladin, an attorney for the American Civil Liberties Union, which represents plaintiffs in the case...   https://ijr.com/judge-to-consider-block-trumps-wall-funds/
.
.

Before President Trump announced that he was imposing 25% tariffs on hundreds of billions of dollars’ worth of Chinese goods, he got encouragement from an unlikely source: Sen. Charles scumbag-Schumer, D-N.Y. The Senate Democratic leader, who has little good to say about Trump most days, tweeted, “Hang tough on China, @realDonaldTrump. Don’t back down. Strength is the only way to win with China.”

That should have been a wake-up call for Beijing. When Chuck scumbag-Schumer is tweeting support for Donald Trump, it’s time to cut a deal.

But China didn’t cut a deal — and now it is paying a price. Those who suggest Trump started this trade war with China have it backward. Beijing has been waging economic warfare on the United States for years — stealing our intellectual property, forcing our companies to transfer technology as a price of doing business in China and subsidizing state-owned enterprises to prevent U.S. businesses from competing in dozens of sectors of the Chinese economy. The difference now is Chinese leaders are facing a president who is willing to fight back.

China apparently didn’t think Trump would do so. The Wall Street Journal reports that Chinese negotiators believed they had leverage because Trump “was worried about the future course of the U.S. economy and therefore may be more eager to do a deal.” Big mistake. The U.S. economy is strong, unemployment is at the lowest level in five decades, and wages are rising. In fact, America’s biggest economic problem is that we have more job openings than unemployed people to fill them.

China’s economy, by contrast, is in trouble. Last year, China reported its slowest economic growth since 1990, and the Financial Times reports that many experts “believe its official data understates the true extent of the slowdown.” While the United States has added about half a million manufacturing jobs since Trump took office, China’s manufacturing sector is shedding jobs. And the Chinese population is aging rapidly as birthrates are falling, which means the workforce is becoming smaller and less productive.

Our economic strength against China’s relative weakness gives Trump leverage in this standoff, and he is using it. Trump knows the United States can better withstand a trade war than China and that President Xi Jinping needs a deal more than he does.

Trump is wrong when he says tariffs are good for our economy because China is paying us “hundreds of billions of dollars” in tariff revenue — money he can use to help farmers withstand the blow of lost sales to Beijing. China is not paying the cost of tariffs. American businesses and consumers are paying. But the fact that Trump mistakenly believes tariffs are good for the economy should be a wake-up call for Beijing. He thinks he’s in a win-win situation, and that means, in this game of chicken, Trump is not going to blink.

And while China is not paying the cost of the tariffs, their impact on U.S. consumers may not be as bad as some observers predict. As my American Enterprise Institute colleague Derek Scissors points out, our low rate of inflation neutralizes much of the costs of higher prices from tariffs, which will diminish over time. “If the US places 25% tariffs on all Chinese imports and no substitution for those goods and services occurs, the additional cost would be $145 billion. That’s a bit over one percent of 2018 consumer spending,” Scissors writes, but “the cost will certainly not that be that high, because substitution will occur. And the cost will fall over time as more producers enter to replace Chinese.”

In other words, our dynamic, growing, low-inflation economy can handle a trade war with China. That does not mean China will buckle easily. State ownership is the means by which the Communist Party directs the Chinese economy. Getting China to stop subsidizing large sectors of its economy, and to cease its theft of U.S. intellectual property, will be extremely difficult. But Trump knows he has no chance of doing so by filing complaints with the World Trade Organization. He is right to take a hard-line stance.

It’s much easier to question the wisdom of launching trade wars with allies such as Canada and the European Union. But we should all be able to agree that China is an economic predator against which we need to fight back. Trump is using tariffs to force China to open its markets to free trade and competition. Every American should be standing behind the president as he does so — just like Chuck scumbag-Schumer.