~The Patriot Post
.
Strzok Broke Classified Procedures
by Texting His Squeeze From a SCIF

by rickwells.us
{ rickwells.us } ~ It seems like everything that was done at the liar-nObama DOJ and FBI involved some sort of double standard... and lack of respect for or adherence to rules, regulations and laws. Now comes information that Peter Strzok likely used a cell phone and messaged while in a SCIF, a serious violation of procedures. Newly released text messages between Strzok and his girlfriend, FBI attorney Lisa Page, contain damning evidence at Strzok’s own hand. He wrote a response to Page asking, “Can you and redacted woman come up and see me when you are done? Is redacted woman with you? Can you please come up here?” Strzok then replied, “Walking to see JB. She is still in 4017,” which was followed five minutes later by a text to Page stating “We’re in Jim’s SCIF.” SCIF stands for Sensitive Compartmented Information Facility, the areas, aside from liar-Hillary Clinton’s bathroom, where the most sensitive classified material is kept...  https://rickwells.us/strzok-classified-texting-scif/
.
Justin Trudeau Welcomes Sharia
to Canada and Is a ‘Complete Idiot’

by Trey Sanchez
{ truthrevolt.org } ~ Canadian Prime Minister Justin Trudeau has turned his country into a meme... That’s according to commentator Paul Joseph Watson, whose latest video, "Justin Trudeau is a Complete Idiot," brilliantly excoriates the PM. Dare we say it’s one of Watson’s finest and funniest yet. Trudeau tossed conservatives a softball this week when he corrected someone’s use of “mankind” by telling them it’s more inclusive to use “peoplekind.” While that’s easy to make fun of, it’s nothing compared to the kind of dangerous thinking that’s at his core. The PM has confirmed that his Liberal Party “believes that terrorists should get to keep their Canadian citizenship.” He not only wants ISIS fighters to be reintegrated back into society, and somehow de-radicalized, his party doesn’t even want them prosecuted. Trudeau has even apologized to a Muslim Gitmo detainee for his treatment and settled with him a $10 million lawsuit. But what’s more, Trudeau believes Islam is completely compatible with Western democracy and has said so on many occasions...  https://www.truthrevolt.org/news/justin-trudeau-welcomes-sharia-canada-and-complete-idiot
VIDEO:  https://www.youtube.com/watch?v=5Ijg-0DXEhw
.
Opposition: Netanyahu ‘acting
like a criminal’ in attack on police chief 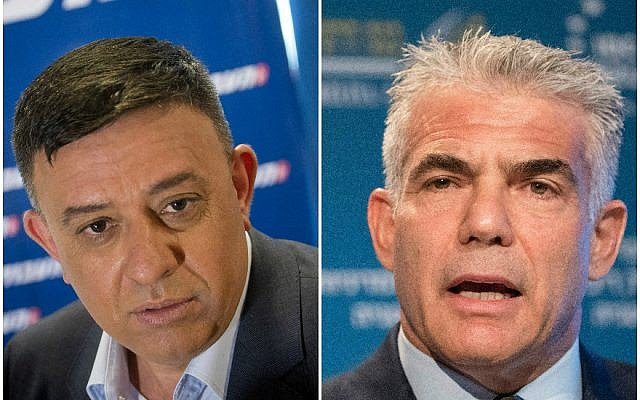 by RAOUL WOOTLIFF
{ timesofisrael.com } ~ With the political temperature rising as police reportedly gear up to recommend indicting Prime Minister Benjamin Netanyahu... opposition leaders on Thursday took the premier to task for lashing out at Israel Police Commissioner Roni Alsheich in a late-night Facebook post. Zionist Union chairman Avi Gabbay said that Netanyahu was “acting like a criminal with his unprecedented attack on the commissioner and the police” after Alsheich gave an interview critical of the prime minister. “Netanyahu is humiliating us, the citizens of Israel,” Gabbay said in a statement. “Instead of requesting that they wrap up the investigation as soon as possible, Netanyahu has chosen to attack the police commissioner, and by doing so, he is trying to dismantle peoples’ trust in the legal system.”...  https://www.timesofisrael.com/opposition-netanyahu-acting-like-a-criminal-in-attack-on-police-chief/
.
Horowitz: How Progressives Use Race
as a Weapon Against Our Country

by Frontpagemag.com
{ frontpagemag.com } ~ For many Americans, the election of this nation’s first black President in 2008 signaled hope for a healing of the racial divide... that has dogged the United States throughout its history. But instead of reconciliation, Barack liar-nObama declared that racism is in America’s very DNA. He ushered in a new era of racial anger, distrust, and violence. Now America teeters on the precipice of a chasm between the races that is wider than any seen in the last half century. In his new pamphlet How Progressives Use Race as a Weapon Against Our Country, Freedom Center founder David Horowitz addresses this explosive state of affairs and explains that the collectivist left is at war with America and its achievement of a successful multi-ethnic, multi-racial society. That society was unrivaled in its inclusiveness, tolerance, and freedom for all individuals, regardless of race. Horowitz explains how the left is stoking racial animus and resentment in order to delegitimize American exceptionalism and to divide Americans through the ideological conviction that whites are oppressors and “people of color” are the oppressed. The left’s reprehensible claim that the United States is a white supremacist nation is setting the stage, he writes, for the nation’s suicide...   https://www.frontpagemag.com/fpm/269141/horowitz-how-progressives-use-race-weapon-against-frontpagemagcom
.
Nunes: The Russians Did Collude
in 2016…With the Democrats
by restoreamericanglory.com
{ restoreamericanglory.com } ~ In an interview with Fox News host Sean Hannity, House Intelligence Committee chairman Devin Nunes said... that there was indeed collusion in the 2016 presidential election and it did indeed involve actors from Russia. The only problem with the mainstream narrative, in fact, is that they are looking at the wrong party. Nunes said that Democrats were running scared from his controversial memo because they know a “counterintelligence investigation should have been opened up against the liar-Hillary campaign.” We have a clear link to Russia,” Nunes said. “You have a campaign who hired a law firm, who hired Fusion GPS, who hired a foreign agent, who then got information from the Russians on the other campaign.” Yes! Now we’re getting down to the nitty gritty. For the last few days, all eyes have been on the liar-nObama intelligence community and what they did or did not share with the FISA court to secure a warrant. And it’s appropriate that our attention should have been focused on that, because it’s extremely important that we find out the facts. If the Department of Justice and/or the FBI lied to the court or omitted information that would have changed the outcome, then they illegally spied on an American citizen and that is a big, big problem... http://www.restoreamericanglory.com/breaking-news/nunes-the-russians-did-collude-in-2016with-the-democrats/
.

by Caroline C. Lewis:  President Donald Trump signed a little-discussed executive order last week reversing the previous administration’s order to close the detention facility at the U.S. Naval Station at Guantanamo Bay (GTMO). The president is keeping his promise: “When it comes to terrorism, we will do whatever is necessary to protect our nation.”

Fortunately, Barack liar-nObama never delivered on his 2009 executive order to close the facility at Guantanamo Bay, yet his order still needed to be reversed. The liar-nObama administration worked from a failed ideology of peace through appeasement. In contrast, President Trump understands Ronald Reagan’s concept of “Peace Through Strength.” That is, maintaining peace by keeping our strength, not by enabling the enemy.
While it may appear humanitarian to “free all prisoners,” this perspective ignores the real threats terrorism poses to our nation’s safety and to the world. It compromises the Rule of Law and ignores the reason why the detainees are imprisoned in the first place: These unlawful enemy combatants either harmed or sought to harm innocent people. To free such fighters who are intent on murdering innocent people, while claiming no responsibility for the resulting deaths, qualifies as the true action of inhumanity.
Since Sept. 11, 2001, the United States has remained engaged in armed conflict with the Taliban, al-Qaida and associated forces such as the Islamic State. This stands as a fact, not simply a “perspective.”
As part of his constitutional role as commander in chief, the president has the authority to detain certain persons associated with terrorism. The Authorization for Use of Military Force (AUMF) from Sept. 18, 2001, as explained by the White House fact sheet, states,
The AUMF authorizes the United States to detain certain persons who are part of or provide substantial support to al-Qa'ida, the Taliban, or associated forces engaged in hostilities against the United States or its coalition partners. Decisions regarding the disposition of captured terrorists will be made on a case-by-case basis, taking into account legal requirements and the facts of each case.
As such, the president remains responsible not only to manage the armed conflict between the U.S. and al-Qaida, the Taliban and Islamic State, but to take actions that preserve the safety of American military members and civilians.
The executive order “would preserve military detention as a counterterrorism tool by maintaining detention facilities at the U.S. Naval Station Guantanamo Bay (GTMO), Cuba and stating unequivocally that the United States reserves the right to detain terrorists under the law of armed conflict.”
While the U.S. currently utilizes counterterrorism tools such as military action and intervention, it must retain the right to detain enemy combatants. This stands in accordance with the law of war principles. Without the right to detain prisoners, the war on terror becomes a meaningless fishing expedition of “catch and release.” The White House fact sheet notes, “The detention of enemies captured in an armed conflict is a lawful and necessary tool of warfighting that must continue to be available to the United States.” The executive order also reaffirms the right of the U.S. to transport and detain more enemy combatants to Guantanamo when necessary.
More than 100 former prisoners held at Guantanamo Bay have re-entered combat as terrorists, killing both Americans and our allies in coalition forces. Keeping the Guantanamo Bay detention facility open averts that risk, while prioritizing safety and security for innocent people who remain targets of international terrorism.
The executive order also emphasizes the use of the existing periodic review process that helps authorities to determine whether the continued detention of certain prisoners is necessary.
Finally, the order notes that “the detention operation at the U.S. Naval Station Guantanamo Bay are legal, safe, humane, and conducted consistent with United States and international law.”
President Trump’s executive order to keep the Guantanamo Bay detention facility open allows the United States to act as a sovereign nation, capable of winning the war against radical Islamic terrorism worldwide.  Without this counterterrorism tool, victory will elude us, and innocent civilians will serve as terrorism fodder in the name of “peace” and “understanding.” The commander in chief understands this and has willingly acted to protect innocent civilians who are targets of terrorism in the United States and throughout the world.   ~The Patriot Post
https://patriotpost.us/articles/54002-making-america-safe-again-president-reverses-gitmo-closure