.
The Real Lesson of the Inspector General's Report

by Tadas Klimas
{ americanthinker.com } ~ You missed it. But that's all right: everyone else missed it, too... Michael Horowitz is the Department of Justice's Inspector General. He testified on June 18th before the Senate Judiciary Committee about his report concerning the liar-Hillary Clinton national security breach investigation. The revelation came to light during questioning by Senator John Kennedy. (@7:36) Horowitz testified that “most” of the investigative decisions in that investigation were made not by the FBI but by prosecutors within the Department of Justice. One might be tempted to conclude that much of the criticism of the FBI for its decisions in the aforesaid liar-Clinton investigation would have to be discounted or re-examined. Perhaps. But that is not the most important conclusion. For whatever reason, it is clear from the report that the structure of the FBI/DOJ's liar-Clinton investigation was all off: the FBI was reduced to providing a set of runners perhaps willing and even avid, because of their demonstrated bias, runners, but runners just the same for DOJ attorneys...
https://www.americanthinker.com/articles/2018/06/the_real_lesson_of_the_inspector_generals_report.html
VIDEO at:  http://insider.foxnews.com/2018/06/18/john-kennedy-presses-doj-michael-horowitz-bias-against-trump-clinton-email-report
.
The White House just unveiled a plan for a huge
government shake-up. Here’s what they want to do

by Aaron Colen
{ theblaze.com } ~ The White House announced a plan to merge two major federal government agencies Thursday as part... of a long-planned effort to improve government efficiency, CNBC reported. The plan calls for the Department of Education and the Department of Labor to come together as the Department of Education and the Workforce. “This effort, along with the recent executive orders on federal unions, are the biggest pieces so far of our plan to drain the swamp,” Mick Mulvaney, director of the Office of Management and Budget, said. “The federal government is bloated, opaque, bureaucratic, and inefficient.”...   https://www.theblaze.com/news/2018/06/21/the-white-house-just-unveiled-a-plan-for-a-huge-government-shake-up-heres-what-they-want-to-do
.
Germany's Migrant Policy: Why Trump was Right 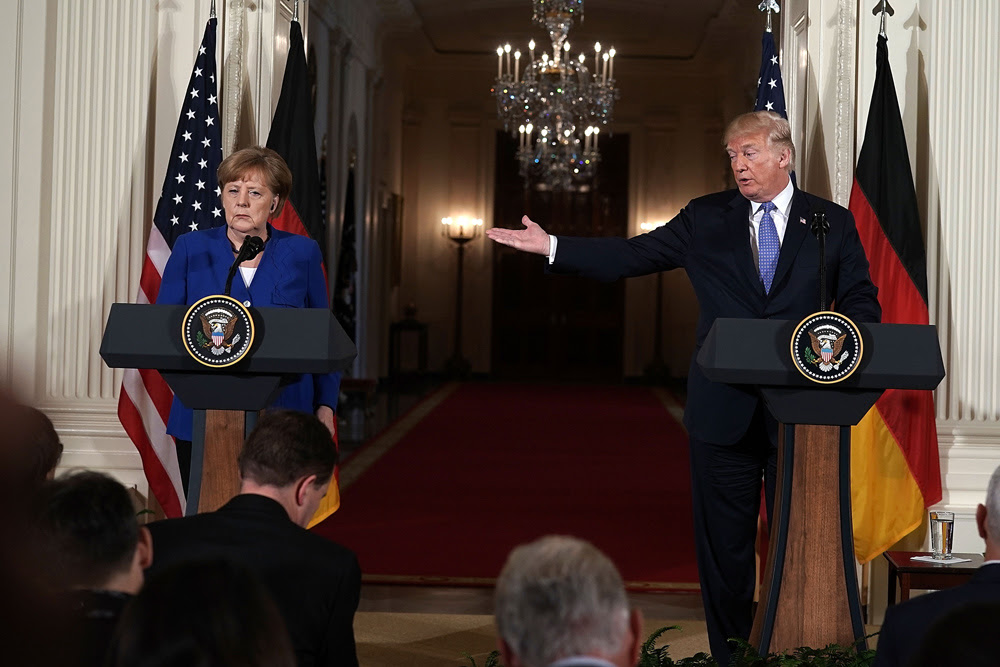 by Vijeta Uniyal
{ gatestoneinstitute.org } ~ US President Donald Trump attacked German Chancellor Angela Merkel's migrant policy this week... The people of Germany are turning against their leadership as migration is rocking the already tenuous Berlin coalition," he tweeted on June 18. "Crime in Germany is way up. Big mistake made all over Europe in allowing millions of people in who have so strongly and violently changed their culture!" he added. President Trump's comments come at a time when Merkel is facing the biggest crisis of her career. She is struggling to hold her government together, with the Bavarian Catholic party, the Christian Social Union (CSU), threatening to leave the governing coalition over immigration. The CSU wants the police to have the authority to turn away illegal migrants at the border, a move bitterly opposed by Merkel. While Trump slammed Merkel's handling of the migrant crisis during his presidential campaign, until now, he has refrained from publicly criticizing her over the issue...   https://www.gatestoneinstitute.org/12570/germany-crime-trump
.
Trump’s bunker buster video blockbuster

by Clifford D. May
{ defenddemocracy.org } ~ Decade after decade, one U.S. president after another, Democrat and Republican alike... knew that the tyrants who rule North Korea were slowly but surely developing the means to incinerate American cities. Those presidents did nothing, or at least nothing effective. President Trump could have responded by tweeting: “liar-Clinton, Bush, liar-nObama left me a mess! Too late now! Sad!” Instead, he decided he would try to solve a problem that has become a crisis. So last week he met with Kim Jong-un in Singapore. Has the threat from North Korea’s nuclear weapons and increasingly sophisticated intercontinental ballistic missiles been eliminated? Of course not and I wish the president wouldn’t claim otherwise. I also wish he hadn’t been quite so effusive in his praise of the mass-murdering, 30-something despot. But perhaps there is method in Mr. Trump’s maddening diplomacy.As you may have heard, Mr. Trump showed Mr. Kim a 4-minute video, an ersatz Hollywood movie trailer titled, “A Story of Opportunity.” The narrator announces: “A new story. A new beginning. One of peace. Two men, two leaders, one destiny. A story about a special moment in time, when a man is presented with one chance which may never be repeated. What will he choose?”...   http://www.defenddemocracy.org/media-hit/may-clifford-d-trumps-bunker-buster-video-blockbuster/
.
To Help Iran, Angela Merkel Tries to Pull a Fast One With Swift

by Mark Dubowitz and Richard Goldberg
{ defenddemocracy.org } ~ As the U.S. moves to reimpose sanctions on Iran, German Chancellor Angela Merkel is working behind the scenes to undermine the effort... How President Trump responds could determine whether his strategy to put maximum pressure on the Islamic Republic will succeed or fail. During briefings in Washington, German officials have indicated their goal: to ensure that Iran remains connected to the Swift system—formally called the Society for Worldwide Interbank Financial Telecommunication—that facilitates global financial transactions. By protecting Iran’s access to the Swift network, Germany hopes to preserve Europe’s ability to pay for Iranian oil, and receive payment for European exports, in contravention of U.S. sanctions. The Germans know that any maximum-pressure campaign against Iran cannot succeed if Iran remains connected to Swift. Last month, in light of “U.S. sanctions which could target EU entities active in oil transactions with Iran,” the European Commission encouraged European Union members to explore the idea of sending direct payments to the Central Bank of Iran. Access to the Swift network makes this possible. If such a payment were transmitted, the U.S. could designate the European country’s central bank as a violator of sanctions, blocking its access to dollars and isolating it from the international financial system. German leaders are betting the Treasury Department would not take the economic risk of doing so...
http://www.defenddemocracy.org/media-hit/dubowitz-mark-to-help-iran-angela-merkel-tries-to-pull-a-fast-one-with-swift/
.

.
Grassley Rips McCabe, Comey and Loretta
Lynch For Refusing to Show Up For
Inspector General Testimony

Earlier this year, a separate OIG report found former FBI Deputy Director Andrew McCabe lied repeatedly to FBI and Inspector General investigators. He played a large role in the FBI's handling of the criminal investigation into liar-Clinton. Today, he pleaded the Fifth and refused to testify.

Former Attorney General Loretta Lynch also failed to show up and fired FBI Director James Comey said he was unavailable due to vacation.

"Mr. Comey’s attorney tells us he is out of the country, although I saw he was in Iowa over the weekend. According to his twitter feed, he seems to be having a wonderful time. This is the second time since he was fired that Mr. Comey refused an invitation to testify here voluntarily. He has time for book tours and television interviews, but apparently no time to assist this Committee, which has primary jurisdiction over the Justice Department," Grassley said. "Ms. Lynch also chose not to show up. The need for transparency does not end when senior officials are fired or quit."

Republicans on the Committee attempted to change the rules to force witnesses like Comey to show up. Democrats, specifically Ranking Member Dianne Fein-stein, refused to get onboard.

"We changed our rules at the beginning of this Congress to ensure the Chairman and the Ranking Member could compel hearing testimony from important witnesses like these," Grassley said. "Unfortunately, the Ranking Member refused to agree to compel any of them to be here today. That’s a shame, because we should be asking them how all of this happened on their watch."
https://townhall.com/tipsheet/katiepavlich/2018/06/18/inspector-general-fallout-fbis-mccabe-pleads-the-fifth-loretta-lync-refuses-to-show-up-n2491942?utm_source=thdaily&utm_medium=email&utm_campaign=nl&newsletterad=
E-mail me when people leave their comments –
Follow