Response to Fort Hood Shooting by Obama/Bush is Very Different

Everyone needs to see this!

So, who told the White House?

I sent my cousin in Fayetteville , N.C. (retired from Special Forces) a picture of George W. Visiting the wounded at Fort Hood . I got this reply:

What is even better is the fact George W. Bush heard about Fort Hood, got in his car without any escort, apparently they did not have time to react, and drove to Fort Hood. He was stopped at the gate and the guard could not believe who he had just stopped. Bush only asked for directions to the hospital then drove on. The gate guard called that "The president is on Fort Hood and driving to the hospital." The base went bananas looking for Obama. When they found it was Bush they immediately offered escort and Bush simply told them to shut up and let him visit the wounded and the dependents of the dead. He stayed at Fort Hood for over six hours and was finally asked to leave by a message from the White House. Obama flew in days later and held a "photo" session in a gym and did not even go to the hospital. All this I picked up from two soldiers here who happened to be at Fort Hood when it happened.

This Bush/Obama/Fort Hood story is something that should be sent to every voter in the US .

Class shows up...
The doctor had the TV on in his office when news of the military base shootings came on. The husband of one of his employees was stationed there. He called her into his office and as he told her what had happened, she got a text message from her husband saying, "I am okay." Her cell phone rang right after she read the message. It was an ER nurse, "I'm the one who just sent you a text, not your husband. I thought it would be comforting but I was mistaken in doing so. I am sorry to tell you this, but your husband has been shot four times and he is in surgery."

The soldier's wife left Southern Clinic in Dothan and drove all night to Fort Hood . When she arrived, she found out her husband was out of surgery and would be OK. She rushed to his room and found that he already had visitors there to comfort him. He was just waking up and found his wife and the visitors by his side The nurse took this picture. 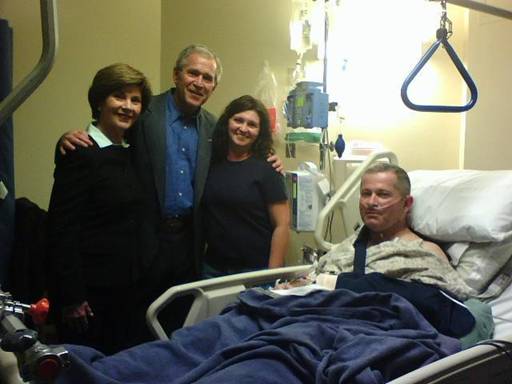 What? No news crews and cameras? This is how people with class respond and pay respect to those in uniform.