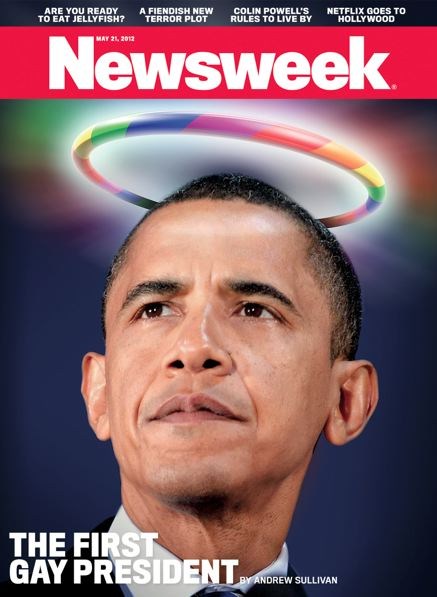 It is becoming increasingly difficult to escape the left's in-your-face aggressive campaign to make homosexuality normal. Flipping through the channels, I caught a lesbian scene (two women kissing) on the Lifetime channel. The SiFi channel has a new series in which bi-sexual scenes involving the lead actress are a main staple of the show.

For crying out loud, I can not even get ideas to remodel my patio without homosexuality forced in my face on the Home and Garden channel. A homosexual couple is featured on most, if not all of their series. Given that gays are less than 2% of the population, clearly Home and Garden network producers are pushing the gay agenda.

And make no mistake about it folks, the left is extremely cunning and aggressive in their quest to make homosexuality considered normal – equal to heterosexuality. Heck, the left believes bisexuality is more enlightened and superior to both.

The left's indoctrination of our kids regarding homosexuality begins in kindergarten. Kids are taught Heather having two moms is really cool. As for us old farts, they simply bully us into submission. They put us in a political stranglehold with our arms bent behind our back; apply painful pressure until we yell, “OK, OK, homosexuality is normal!”

Now, every time I deal with the topic of homosexuality, liberals go crazy! They cuss me out and say I hate gays. I do not. As cliche as this might sound, some of my closest friends and family, who I love dearly, are gay. But loving someone does not mean one should be forced to approve their behavior.

Calling the opposition “haters” is a tried and true effective tool of the left to get-their-way. If you disagree with government forcing taxpayers to fund abortion against their religious beliefs, the left says you “hate” women. If you disapprove of the president ignoring the Constitution to implement his Socialistic agenda, the left says your disapproval is really “hate” for a black man. If you say gay civil unions are fine, but marriage should remain defined as one man and one woman, the left says you “hate” homosexuals. The left actually exploits our sense of decency, compassion and fair-play. They know accusing us of “hate” will in many cases silence our opposition and give them whatever they want.

The left are pretty selective regarding who they call intolerant haters. For example, the left claims Christians are vitriolic haters of gays. While the Bible does call homosexuality a sin, it says “with loving kindness have I drawn thee.”(Jeremiah 31:3)

As a teen touring Maryland black churches while on the Baltimore Youth Choir, gays were active in the black church. Black pastors preached the Bible, but I never saw homosexuals mistreated.

Meanwhile, the Muslim faith has zero tolerance for homosexuals. And yet, the left defends Islam to the max. The Noble Quran's punishment for unrepentant homosexuality is execution, crucifixion or cutting off of hands and feet. (The Noble Quran 5:33) So why does the left, which include the mainstream media, enthusiastically defend Islam while despising and aggressively attacking Christianity? The answer is the left has a problem with Jesus; but that's for another article.

In typical democrat fashion of dividing Americans into various percieved voting blocs, Obama has thrown a bone to numerous groups to win their votes in November; women, college kids, blacks and occupiers. Now Obama is going after the gay vote/contributions. During a recent interview, Obama said he supports gay marriage.

Obama coming out in support of gay marriage might be the single issue which awakens black Christian voters from their Obama Zombie trance.

As a black American who ignores skin-color, I can not begin to tell you how frustrating it has been attempting to persuade fellow blacks to see the devastating effects Obama's Socialistic policies have had not just on America in general, but particularly on the black community. Nothing seems to break their Black Code loyality to the first black president.

But this "gay thing" may be the straw that breaks the camel's back.

My dad and a super-liberal black minister friend consider a vote for a Republican to be a vote for the KKK. And yet, they both voted for Bush's second term to protest the Democrat's support of gay marriage.

As I stated, blacks fellowship with gays in church – love, live and play with them. But trying to make blacks say homosexuality is normal – “ain't happenin'”.