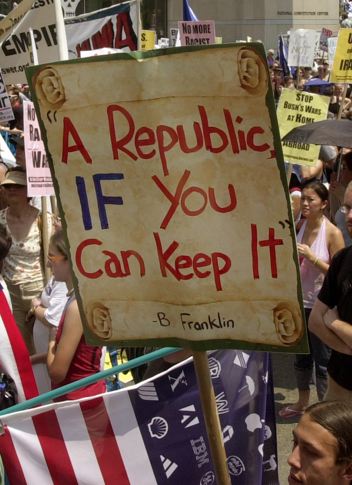 It is well know about Ben Franklin’s prophetic warning regarding the Republic falling prey to despots, but there is another prophecy, or quite dire prediction regarding the nation that should be brought out the cobwebs of history as it may have just come true. Ironically, on January 27, 1838, a young yet unknown man gave his first official speech to an audience gathered at the Young Men’s Lyceum of Springfield, Illinois. His address was entitled, “The Perpetuation of Our Political Institutions.” The young man was 28 years of age, but soon to have a birthday, but by that time, he had been involved in politics for five years.

At such a young age this young man was truly concerned about the continued existence of the Republic— the government of the United States as it had been instituted. One of his immediate motivations for offering such a speech seems to have been the burning alive of a negro man in St. Louis. Yet, it had been only the most recent of a series of horrible events ravaging the nation over the issue of what southern ‘gentlemen’ referred to as their peculiar institution of African slavery. This young man’s concerns may be somewhat similar to our concerns in this day as we observe the ‘poisoning of the well’ by the new regime that has just come to power. In his day, the young man witnessed the President of the United States forcibly removing American Indian peoples from their ancestral homelands at gunpoint. The action was ruled unconstitutional in that time, but it did not matter. The founder of the Democrat Party, Andrew Jackson, did not concern himself with the rule of law.

Violation of the U.S. Constitution
Some things never change. The Party of Jackson has just seized the institutions of the federal government under illegal means, part of which was violation of the U.S. Constitution, and part of which included violation of their own state constitutions. Americans have just witnessed the rule of law violated again and again, and those whom we deem ‘leaders’ have failed to exercise true justice. American citizens may be just as concerned as this young man was in his time about the future of our political institutions, whether they can be salvaged and perpetuated, or whether they are slowly being poisoned by a political party insane with power. The prescient words from the young man’s speech are worth reading again because there is an uncanny parallel between the deep divisions he witnessed in his time, and that which we have been exposed to in ours The young man’s name was Abraham Lincoln. He went on to do great things. Here is a brief excerpt from that speech:

We, when mounting the stage of existence, found ourselves the legal inheritors of these fundamental blessings. We toiled not in the acquirement or establishment of them—they are a legacy bequeathed us, by a once hardy, brave, and patriotic, but now lamented and departed race of ancestors. Their’s was the task (and nobly they performed it) to possess themselves, and through themselves, us, of this goodly land; and to uprear upon its hills and its valleys, a political edifice of liberty and equal rights; ‘tis ours only, to transmit these, the former, unprofaned by the foot of an invader; the latter, undecayed by the lapse of time and untorn by usurpation, to the latest generation that fate shall permit the world to know. This task of gratitude to our fathers, justice to ourselves, duty to posterity, and love for our species in general, all imperatively require us faithfully to perform.

How then shall we perform it?—At what point shall we expect the approach of danger? By what means shall we fortify against it?—Shall we expect some transatlantic military giant, to step the Ocean, and crush us at a blow? Never!—All the armies of Europe, Asia and Africa combined, with all the treasure of the earth (our own excepted) in their military chest; with a Buonaparte for a commander, could not by force, take a drink from the Ohio, or make a track on the Blue Ridge, in a trial of a thousand years.

Are citizens witnessing a slow death by suicide of the United States?
At what point then is the approach of danger to be expected? I answer, if it ever reach us, it must spring up amongst us. It cannot come from abroad. If destruction be our lot, we must ourselves be its author and finisher. As a nation of freemen, we must live through all time, or die by suicide.

I hope I am over wary; but if I am not, there is, even now, something of ill-omen, amongst us. I mean the increasing disregard for law which pervades the country; the growing disposition to substitute the wild and furious passions, in lieu of the sober judgment of Courts; and the worse than savage mobs, for the executive ministers of justice. This disposition is awfully fearful in any community; and that it now exists in ours, though grating to our feelings to admit, it would be a violation of truth, and an insult to our intelligence, to deny. Accounts of outrages committed by mobs, form the every-day news of the times. They have pervaded the country.

Are citizens witnessing a slow death by suicide of the United States? Political leaders seem to simply want to move on, as if the most fraudulent election in our entire history has not honestly happened. They are too polite, or too refined to stoop to such nonsense as an election being stolen. Besides, the trusted mainstream media moguls have the best paid journalists to keep watch for the citizens and ensure that we ourselves would not commit suicide. Right?

Patrick Buchanan wrote a very controversial book not long ago concerning his own predictions about the demise of America. It was called “The Suicide of a Superpower.” Buchanan served as an advisor to three American presidents, and he ran for president three times. He expressed that it was only a matter of a few decades, that the United States of America would expire forever. Are we there yet? Last week, he wrote a column seemingly answering that question in his piece that he titled, “Now, the Left Owns It All,” which is brutally honest, but there are reasons he was never elected POTUS.

Not so long ago, the Rev. Martin Luther King, Jr. and many concerned common citizens worked incredibly hard against near impossible odds. They were victorious over oppression. The nation was in a much worse situation in 1958 than it is today. To move forward in such a time as this, it will take everyone who cares about the survival of the Republic to reach into their hearts to find the passion and strength of will to take ownership of the sruggle and find the ways open to push back, to resist, to work hard, and work smart. Networks of concerned citizens need to be built around burning desires for positive and productive change. Cooperation and alliance with other networks is needed to reconstruct the institutions of the Republic from the grassroots up.

The Republic is not dead yet. “We the People” need to realize that we are the Republic!