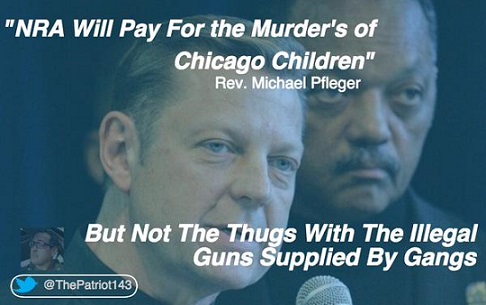 Pfleger and Jackson vs. the NRA

One would think that Catholic priests like Chicago’s Rev. Michael Pfleger, an early supporter of Barack Obama and his push for gun control, would not be bearing false witness against one of his neighbors. Yet there he was standing in front of Chuck’s Gun Shop in suburban Riverdale, Illinois, to blame it, and other legal businesses like it, along with the National Rifle Association, for the murder spree in the gun-controlled progressive worker’s paradise of Chicago.

Standing with the camera-shy Rev. Jesse Jackson and the Brady Campaign to Prevent Gun Violence president Dan Gross in front of the gun shop, Father Pfleger proclaimed that the NRA had “blood on its hands” for the children killed in Chicago gang violence and that the NRA would “pay for the murder of our children.”