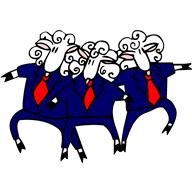 In part (1) the evolution of Liberalism, Socialism and Communism were sort of lumped together showing, but it shows how our youth many years ago were being brainwashed by many different factions. The innocence of our youth made them the perfect victims for those on the left.

Liberalism, Socialism and Communism have created the “Lost Generation.” It was very subtle at first and rather hard to pinpoint just how they infiltrated our Government, our schools, our Colleges, our Supreme Court and our homes. Let’s dissect the brain washed Liberal News Media in an effort to see why they’ve turned into a demonizing faction in our USA – the lost sheep and the lost generation.

All three of these ideologies mentioned are closely connected by certain beliefs; therefore they share a common link or connection with each other. First, they consider all Americans too ignorant and stupid to live independently and be their own counsel.

Second, notice how Obama’s ”better than thou” demeanor is just like Saul Alinskys, George Soros, Bill Ayers & wife Bernadine Dohrn, Cass Sunstein, Eric Holder (AG), Lisa Jackson(EPA), Richard Trumpka (AFL-CIO). They actually believe they’re a superior race and have been endowed the authority to control us. Our White House has been infiltrated with these Liberalists!

Third, they hate groups of people like the Tea Parties, who are fighting to restore our Nation. They want to remove the 2nd Amendment and disarm the citizens of the USA. If they in fact disarm our Nation, we will be totally dependent upon the Government.

Fourth, they fear “God,” and keep trying to remove “God” from our schools, our courtrooms, our Federal buildings, our coins and our Constitution. They’ve been trying to wipe “God” off the map for many moons. God’s not afraid of the Church card they keep jerking out of their pocket. Nope, “God” is alive and well and isn’t about to leave his kids alone in their fight to “take back their Country.”

The Liberal News Media has been spawn by those who wish to take over our Country; they’ve evolved into a bunch of brainless puppets unable to exist on their own. They’re the masters of X-rated regurgitated chewed up and re-edited fiction in an attempt to keep Americans distracted, while they continue gnawing away at our rights and freedoms

Their hatred has no limits as they continue their rampage against the Tea Parties, calling them terrorists, racists, Wahhabis, tea baggers, suicide bombers and the list just rambles on- remember they fear groups of people who meet together to restore our Nation.

They’re pros at using the Church card, the race card and the terrorist card when the going gets tough, but they’re starting to lose traction. They’re losing steam – God’s alive and well, the race card looks like Obama’s last year’s fake birth certificate; the one that was layered and photo shopped. The terrorist card is sort of their wild card specifically used for any person or groups of people who disagree with their ideology.

The worst error the Liberals could have made was to compare the Wall Street Protestors to our Nation’s Tea Parties – this strategy backfired on them! The OWS Protestors are just another generation of lost sheep, who have no respect for themselves or others. They are raping, destroying property, creating unsanitary conditions, and doing drugs and don’t have a clue why they are protesting. They are dangerous because of the puppeteers orchestrating their movement!

The tea parties are our “freedom fighters, they don’t kill, destroy other’s property, throw stones, cans and make threats. They will continue their peaceful march to “Take Back Our Country,” from those who will and have harmed our Nation, our children and our grandchildren.

The Liberal News Media are the robots pre-programed for the destruction of America; they are fed daily by the puppeteers and thrive on lies, propaganda and corruption. They’ve not only lost their way, like the OWS – they are the LOST GENERATION.