On Executive Lawlessness: What MUST We Do? 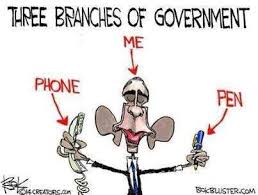 Of and by themselves, whining and studiously explaining the blatant unconstitutionality of Obama’s pending immigration executive order is a foolish exercise in futility.

The answer is to isolate and debilitate Obama. Cut him off at the knees.

If Obama recklessly carries out his threat to issue a sweeping and illegal immigration executive order, our congressional representatives--with tens of thousands of American patriots at their sides--must encircle the White House and demand his resignation! Such assertive, unified action will bring it all to a head one way or the other. This lawless Chief Executive will either resign or pull his lawless executive order. Chastened, perhaps he will then behave like a law-abiding President of the United States until his merciful departure in 2016.

In any event, merely chest-pounding and complaining will no longer be enough to stop the tyranny. Clearly, Obama's achieving his alien ideological goals--not upholding his oath of office or ensuring the Rule of Law--remains the menacing driving force behind all he does. A demonstrably serial liar and neo-Marxist, it is now time to stop him!

Congressional representatives should also use their bully pulpits by appealing directly to the States and to federal employees to ignore all such orders forthwith. Congress should also withhold any funding used to execute any illegal executive orders.

Better the temporary shutdown of a corrupt government than the complete collapse of our constitutional republic.

This is about so much more than simple-minded politics. It’s about safeguarding the doctrine of separation of powers and the very survival of our republic. If Obama–or any Chief Executive– is permitted to routinely get away with such brazen acts of lawlessness, the precedent, like a malignant cancer, will render the Constitution moribund and the Rule of Law an irrelevancy. We would, indeed, become a "banana republic". Are we really willing to accept that?

P.S. I understand the Constitutional Sheriffs Association is planning to descend on DC if Obama commits this crime. If so, then perhaps the Association can lead this effort. Sitting on our hands and hoping for the best or leaving it to fate alone is utterly irresponsible and suicidal.

"The most basic reason for a community or a nation to set up a system of government is to assure its inhabitants that the rights of the people shall be protected and preserved." Thomas Jefferson

"In the face of tyranny, always permit our Founders to be our guide. To prevail, we must be fearless, tenacious and unequivocal in our steadfast defense of Liberty."
E-mail me when people leave their comments –
Follow