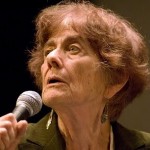 What's disturbing about this picture?

“Frances Fox Piven, co-architect of a strategy to overload the U.S. welfare system to precipitate a transformative economic crisis, was an early builder of the socialist-leaning New Party.

Scores of other New Party activists, meanwhile, have been tied to President Obama.

The New Party sought to elect members to public office with the aim of moving the Democratic Party far leftward to ultimately form a new political party with a socialist agenda.

In 2008, Obama’s campaign denied the president was ever a member amid reports, including from WND, citing the New Party’s own literature listing Obama as a member.

Last week, researcher and author Stanley Kurtz, writing at National Review Online, reported on documentation from the updated records of Illinois ACORN at the Wisconsin Historical Society that “definitively establishes” that Obama was a member of the New Party.

Kurtz reported Obama also signed a “contract” promising to publicly support and associate himself with the New Party while in office.

A July 20, 1992, article in The Nation magazine by New Party founder Joel Rogers, meanwhile, lays out the case for the establishment of the party and lists several of the group’s early founders and activists.

In that article, titled “Out with the Old Politics, in with the New Party,” Rogers cites Piven as an early activist in the formation of the New Party, which he describes as a “social democratic” party.

Piven, together with her late husband, activist and fellow Columbia professor Richard Cloward, developed the Cloward-Piven strategy, which called for overloading the U.S. public welfare system.

The duo’s stated goal was to agitate a financial crisis that would collapse the U.S economy and replace it with a national system with “a guaranteed annual income and thus an end to poverty.”

Other early New Party activists listed by Rogers have ties to Obama. Those activists and others were also listed as New Party “builders” in the party’ newsletter, the New Party News.

Some of the key New Party activists with Obama ties include:

The New Party, established in 1992, took advantage of what was known as electoral “fusion,” which enabled candidates to run on two tickets simultaneously, attracting voters from both parties. But the New Party disbanded in 1998, one year after fusion was halted by the Supreme Court.

The socialist-oriented goals of the New Party were enumerated on its old website.

Among the New Party’s stated objectives were “full employment, a shorter work week and a guaranteed minimum income for all adults; a universal ‘social wage’ to include such basic benefits as health care, child care, vacation time and lifelong access to education and training; a systematic phase-in of comparable worth; and like programs to ensure gender equity.”

The New Party stated it also sought “the democratization of our banking and financial system – including popular election of those charged with public stewardship of our banking system, worker-owner control over their pension assets [and] community-controlled alternative financial institutions.”

Many of the New Party’s founding members were Democratic Socialists of America leaders and members of Committees of Correspondence, a breakaway of the Communist Party USA.

Last month, WND reported on a 1996 print advertisement in a local Chicago newspaper that shows Obama was the speaker at an event sponsored and presented by the Democratic Socialists of America, the DSA.

WND first reported on the event in 2010.

In 2009, WND reported on newspaper evidence from the New Party’s own literature listing several new members of the New Party, including Obama.

Last week, Kurtz, writing at National Review Online, reported Obama signed a “contract” promising to publicly support and associate himself with the New Party while in office.

In 2008, Obama’s Fight the Smears campaign website quoted Carol Harwell, who managed Obama’s 1996 campaign for the Illinois Senate, as stating: “Barack did not solicit or seek the New Party endorsement for state senator in 1995.”

Fight the Smears conceded the New Party did support Obama in 1996 but denied that Obama had ever joined.”

I. OBAMA JUST CAUGHT IN BIG LIE? ‘Documents confirm he was member of socialist party!’-Posted on TeaParty.org-By Jake Martinez-On June 7, 2012:

Is President Obama inciting riots across the US?