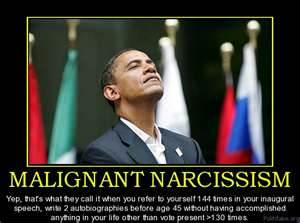 No, this isn’t propaganda this is the writing on the wall.  Here’s what Obama has accomplished in his 3 ½ year reign as dictator of the USA.  He’s destroyed our economic power and sicked EPA on all businesses big and small. Many businesses have downsized or closed their doors and others are in a holding pattern afraid to hire or expand their businesses.

He’s increased our National Deficit over 5 trillion dollars and refused to balance our budget.  Daily the Nation’s debt is increasing about $3.93 billion per day and each citizen’s share surpasses 50,000.  Here’s an interesting tidbit from Cicero: "The budget should be balanced; the treasury should be refilled; public debt should be reduced; and the arrogance of public officials should be controlled."-Cicero. 106-43 B.C.  Americans etch these words on your foreheads – this is the only way we will retrieve our Country and place it back on its once very strong foundation.

It took Obama over a year behind closed doors to craft Obamacare – it’s an albatross around the necks of the private citizens, the medical field, the insurance companies and has hidden taxes, a death panel (call it whatever you want) and definitely will push granny and grampy over the cliff.

The Obama’s green company scams of is just that – his big bundlers benefited from the scams and taxpayers lost billions of dollars on companies like Solyndra, Sun Power, Tesla and many more.  Fisker Automotive Company was financed by Americans.  Americans not only lost millions of dollars, but Fisker subcontracted the Finish to manufacture the new electric cars.

Fisker’s $97,000 vehicle bankrolled by Americans via the DOE is over a year behind in their schedule - a couple of vehicles have finally been delivered to customers. Throw the Chevy Volt into the mix, which is literally a time bomb with botched batteries and slopped up charging systems and you have an accident waiting to happen plus millions of taxpayer’s money lost and gone forever. We haven’t heard the last of the GM debacle – Obama rolled out the red carpet for GM once again misusing taxpayer’s money to fund an incompetent company with a gob of over - paid CEO’s that dug their own hole and ran with their tale between their legs to Obama.

What about Obama’s favorite vulture bundler and crook – Jon Corzine?  The Liberal News media runs and hides every time they hear Jon Corzine’s name – they won’t touch this subject with a ten foot pole.

Obama has declared a peaceful Martial Law, which is a fire drill for the time he deems it necessary to pass a full blown Martial Law which will stop the Presidential Election thusly keeping his job intact.  He was hired for an 8 year run by his puppeteers and he’s not about to relinquish the office of Commander in Chief.

What about the Senate hiding behind closed doors passing bills and spending millions of taxpayer’s money – Obama & the Senate are passing bills right and left prior to the November 2012 election?   Sen. Jim DeMint (R-S.C.) voiced concerns that the Senate passes over 90 percent of legislation without any debate, without amendment, and without a roll call vote.

How’s that for treasonous acts against acts against our Nation – no one gets to read these bills, there isn’t any transparency and Obama & Reid are using the hatchet against all Americans hoping you’re preoccupied with his  class warfare and racism tactics to notice what he’s doing while we sleep. So for those gleefully running around refusing to vet this imposter – you may not be “birthers” but you’re verging on stupidity – we have terrorists in our midst and on our turf as we speak.

Let’s quit playing childish games the buck stops at the Commander in Chief’s desk and he is responsible for the GSA’s lavish conferences, vacations and sick entertainment.  He’s responsible for the Fast and Furious gunrunner operation that has killed hundreds of innocent Mexicans and 2 of our border agents; the DOJ website quite clearly states that Obama funded 10,000,000 and ear marked it for the Fast and Furious gunrunner operation.

The OIG (Office of the Inspector General) notified Congress, Holder, Napolitano, ATF and Obama about the dangers and problems that the gunrunner operation posed way before Jaime Zapata or Brian Terry were murdered.  He’s responsible for high unemployment, our weakened Military, our unsecured borders, reduction of our nuclear capabilities and the blatant misuse of taxpayer’s money.

There’s no nice way of defining the actions of Obama the person some call our Commander in Chief – he is an imposter engaging in 3 ½ years of deception.  He defies our Constitution, threatens the Supreme Court Judges and places himself above the laws of our land. All of his Czars are Communists, Marxists or extreme radicals who are his “gophers” of choice – all of these strays are foot loose and fancy free preparing our Nation for Obama’s New World Order.

Obama’s actions and motivation the past 3 ½ years have been with the intent to overthrow our Government.  In 2009 he literally robbed our “piggy bank” taking 787 billion dollars for his slinky redistribution agenda.  On his watch our credit rating was dropped, our debt ceiling raised, inflation is nipping at our heels, gas prices are a bloody mess and our National Deficit has gone off the Richter scale.

Obama has been in the attack mode since he took office in 2009; he’s a narcissistic dictator who has attacked our businesses, our religious freedoms, our 2nd Amendment, our Constitution and our freedom of speech.

Girma Tassew /May 3, 2009 discusses the pathology of a “dictator.”  Obama fits the DNA of a dictator or autocratic ruler and below are a few of the most obvious symptoms.

Regardless of his citizenship, his past or his relationships Obama has intentionally and willfully harmed one of the greatest Nations in the world; he must be removed from office prior to November 2012.  It’s our duty to protect our Constitution and defend our Nations from all enemies; this isn’t an option, this is a responsibility and that is included in our citizenship.  Ask yourselves one question – are you better off now than you were in 2009?