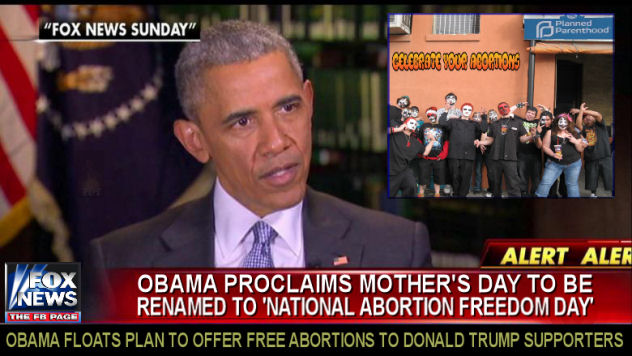 As families all across America sit down to Mother's Day brunch,President Obama plans to make use of the popular holiday to "celebrate reproductive diversity" and "honor mothers who exercise their reproductive freedoms."
In a ceremony Sunday morning Obama singed the 'Patriot Freedom of Womb Liberty Act' which would add a new holiday,the 'National Abortion Freedom Day' to the already established Mother's Day holiday.
Obama called the new holiday “a day that celebrates a woman’s freedom to make her own choices about her body and her health, and reaffirms a fundamental American value: that government should not intrude in our most private and personal pubic matters.”
Obama also praised Planned Parenthood,an abortion rights organization,for it's support and lobbying for the celebration. The organization has offered to host free Chinese Buffets on Mother's Day for all Mothers who terminated their pregnancies early.The events will be staged at Planned Parenthood clinics and other places where abortive mothers frequent such as biker bars and Insane Clown Posse concerts.
“On Mother’s Day, we celebrate those who are first to welcome us into the world,” Obama said. “Performing the most important work there is, mothers – biological, foster, adoptive, or abortive – are our first role models and earliest motivators. They balance enormous responsibilities and shape who we become as adults, their lessons guiding us through life.”
The president continued, “Regardless of sexual orientation, gender identity, or whether they allow their fetus to live, mothers have always moved our nation forward and remained steadfast in their pursuit of a better and brighter future for their children.If those aborted babies were here today,I am sure they would say,'Thank you Mom,I love you.”