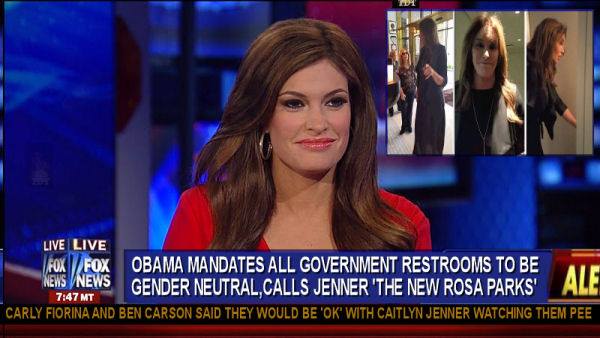 As the Presidential candidates are trying desperately to define their platforms on the economy and national defense,Christian conservatives again are targeting issues that are foremost on the American people's minds.This time,it is where we should all be using the restroom.
Late Sunday,President Obama signed the Freedom Liberty Patriotic Restroom Compliance Act,which is an executive order that would establish 'all restrooms in Government facilities shall be used by men,women,and/or Transgenders based on urgency and need.'
This comes in the wake of reality TV star and transgender icon Caitlyn Jenner making a bold political statement this weekend— simply by using the bathroom at Trump Tower in New York City.
During an appearance on "The Today Show" last Thursday, Trump was pressed to share his position on HB2, the controversial North Carolina bill that, among other things, prohibits trans people for using the restroom that corresponds with their gender identity. In a move that riled some conservatives, Trump came out against law, saying it was unnecessary. Then he said that if Jenner visited one of his properties, she could use whatever bathroom she wanted. A week later, Jenner took him up on the offer.
President Obama praised Jenner and compared her to Rosa Parks,who was an African American civil rights activist.On December 1, 1955, in Montgomery, Alabama, Parks refused to obey bus driver James F. Blake's order to give up her seat in the colored section to a white passenger, after the white section was filled.
"These two great women,",Obama said in a press conference,"who championed the right in a free society to sit wherever they want,held no elected office. They were not born into wealth or power. Yet the events of sixty years ago as with what happened this weekend, has changed America.”
Obama sat on the same bus where Parks triggered the boycott during a 2012 visit to the Henry Ford Museum in Detroit. He vows to visit Trump Tower so he can also sit on the same seat Jenner did.
Obama believes that allowing gender equality in the restroom will allow people to come together as never before and usher in a new world order of restroom equality.
Republicans lashed out at the President for potentially endangering the safety of government building guests and their children.Presidential candidate Ted Cruz told Fox news if elected he would reascend the order and restrict bathroom usage to appropriate Judaeo-Christian toilet protocols.Obama has talked about "pen and phone" actions, and Cruz said he can reverse them if he is elected.
"He has a phone and he has a pen, but if you live by the pen you die by the pen, and my pen has got an eraser," he said. "Would you want me to come in to a restroom and take out my privates standing next to your daughter? I know my daughters don't like it when I do it at home. I sure as heck don't want to live in a society where it's wall to wall little girls screaming in restrooms."
Cruz has long said he would repeal many of Obama's executive actions, which he calls "illegal and unconstitutional," on his first day in office.
The order will go into effect in the fall just before the general election,leading some to believe the President may be grandstanding to gain the LGBT vote for Hillary Clinton. The Trump campaign could not be reached for comment.