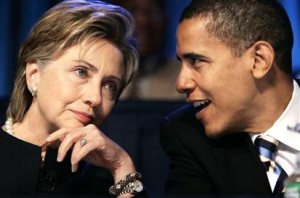 Many times I have written about Obama and Hilary Clinton and their unadulterated worship of Saul Alinsky and his “Rules for Radicals.”  There is one thing that wasn’t mentioned in my articles and that is securing the trust of the people. Obama and Hillary threw “trust” out the window thinking it unimportant.

Obama’s first few years were smooth sailing for the youth, African Americans, Hispanics and Liberals were gushing and literally idolizing and jumping through hoops for him.  His word was gospel to them and the Liberal News Media aided and assisted Obama never wavering just marching steady to his drum.

Hilary Clinton did the same thing during those first few years of Obama’s first term – as Sec. of State she slithered around traveling to and fro partying, wining and dining on our tab. Easy come – easy go!

Let’s not forget though, Hilary Clinton is a tough broad with brass knuckles whose “rap sheet” starts in the 70’s and read like America’s most wanted. During this time there were murders, suicides, the Watergate scandal and she & Bill earned a devious reputation of body slamming anyone and everyone who confronted them or questioned their actions.

So let’s put the “Bobbsey Twins” (Obama & Hilary) in the same political arena. Both are arrogant and confident that they can slither out of any problem or scandal that arises, because they’re much smarter than Americans. Both of these individuals are adept at power punching their detractors because they have the mainstream media willing and waiting to finish off their prey.  Although no one knows for sure what the deal was between the Obama’s and Clintons; it was obvious to all that they had a deal.

Hillary was to lay low, work on her run for President in 2016 while Obama paved the way for her to finish destroying our Nation.  Although Bill Clinton wasn’t happy about this arrangement, he reluctantly agreed to be a buffer for Obama and keep Americans in tow. Bill had big plans for Hillary.

There’s one major glitch in their strategy though and that is the American populace, the hardworking middle class, the college students still waiting for jobs that were promised and the seniors who have had their retirement destroyed by their shenanigans.

Obama lied to the African Americans and instead of bringing them out of poverty like he had promised – he deliberately took jobs from them, ignored their suffering communities and as time went on the African Americans became more dependent on “Big Daddy” Government joining the entitlement crowd.

But, the ones who have taken the biggest hit during his five years without a doubt is the middle class. He has attacked them from all sides not creating jobs, but destroying jobs. He’s misused their stimulus money redistributing it mainly to his green scams, big bundlers and the Unions.

While they were busy trying to keep food on the table he sneaked into their schools attempting to steal their children from them through what is known as “Common Core.”  Just a brief on “Common Core”  this will help everyone understand the illegal and over – reach of power that Obama has used to infiltrate our schools.  U.S. CODE § 1232A - PROHIBITION AGAINST FEDERAL CONTROL OF EDUCATION.

Today CBO stated that the Obamacare debacle was causing havoc in our Nation.  CBO predicts this monstrosity is going to cost Americans 2 million plus jobs in 2017.  It’s my contention that there will be millions of jobs lost in 2014 way before the election in November.

Do to the horrendous cost of ACA, businesses can’t stay afloat without laying off employees and/or keeping them on a part-time status. This will intensify our recession, increase the entitlement society, increase the National Debt and add one more financial burden on those who are working.  Yes, all of this is bad news for Americans, but Obama and Hillary aren’t home free by a long shot! 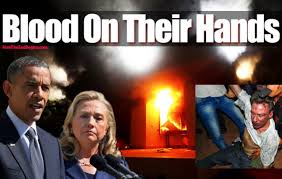 The Bobbsey Twins have one of the biggest scandals in United States history lingering on their plates and it’s not about to be kicked down the road and thrown into the shadows by Obama and Hillary – the Benghazi murders will haunt them daily because Americans will not forget that they both were in charge and neither one lingered in the White House to save our four American men.

They both lied for weeks about the attack blaming it on a “video.”  This is one time the smooth talking twosome will be held accountable –even the Liberal news can’t bail them out of this devious, evil political scheme.  No one will forget Hillary’s nasty remark, “What difference does it make.”

Bill O’Reilly interviewed Obama Sunday the 3rd, 2014 and Obama lied again about Benghazi.  He pretended that he told America the day after the attack, that it was a terrorist attack.  Then why did Obama, Hillary and Rice for weeks keep blaming the attack on a video.  Simple answer - because there was a Presidential Election coming up.