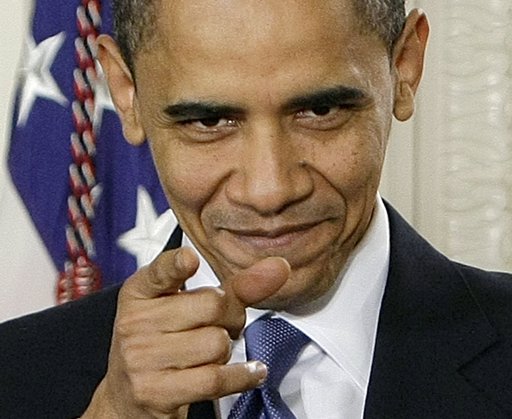 Obama says will take more than one term to destroy USA

As Obama and his Leninists continue to denigrate and rule over the USA and the American people, the Republican latent-integrity “go along to get along” electees—led by chief lame-pony John Boehner—continue to protect the Usurper-and-Dictator-in-Chief.  After pretense upon pretense of shock as to how far the Obama syndicate has already taken the country into ruin, the wimpy “I sold my soul, how about you?  And how much did you charge?” crowd of faux GOP-ers continue to vote with and for the tyrant.

The bogus budget battle was the strongest clue that the GOP joined the Marxist Party in no longer being in favor of continuing the United States of America as a free and solvent country.  That which was a big disappointment at $38.5 Billions cut in spending turned into a slap in the face when it was realized that the number had been faked and the real ‘cuts’ dropped to $14.7 in discretionary spending and some reports are that they were barely over $300 millions.  In other words, no one in Congress had any intention of doing any spending cuts at all.

Our gas prices are currently over $3.00+/gallon nationally and there is every indication (due to Obama’s intentions) that they will be at between $5-7.00/gallon soon.  The tyrant is, also, still trying to find loopholes in order to saddle us with electric energy prices that “will necessarily skyrocket” as he promised us they would.

Obama was convinced it would take him another term to complete his planned but, still unfulfilled chaos amidst the American public so that their lives, homes, work, God, country and all else they hold dear will be completely and utterly destroyed…with no chance of ever returning.  If it were not so, we would be drilling for oil in our own country and not funding Brazil and other countries drilling programs.  If it were not so, we would not be experiencing the worst power grab in our history by the now-rulers of what was once We-the-People’s country.  And, if it was a lie, we would not be losing multiple freedoms on an almost daily basis.

Prior to the 2008 general election, I wrote a column titled “Is the USA Ready for an American Stalin?”  Tragically, it was far more prescient that I had thought.  Each day under Obama and his go along to get along Congress brings us closer and closer to the old USSR.  A USSR that had Stalin destroying food so that people would starve to death and the population would be reduced.  People stood in line for hours and sometimes days for a loaf of bread.  A smaller population is easier to suppress.  The Russian people were virtual prisoners within the USSR and completely at the mercy of the Communist rulers who lived large and well while the people starved or froze to death.  An immobile population is easier to contain.

For those of you too young to remember, the above actually happened in old Soviet Russia…the by design plan for the creation of the elite “haves” and the peasant (proletariat) “have-nots.”  And, it is beginning to happen here in the United States of America.  As instructed by his mentors Saul Alinsky and George Soros, Obama is working very hard every day to wipe out the middle-class in America.  Traditionally, the middle-class in the USA has been better educated and had a sizable amount of ‘disposable’ wealth.  However, over the last few decades, the Left has decimated our once-model educational system and replaced it with indoctrination and ’feel-good’ non academics.  And Obama has now destroyed more jobs in his first two years in office than even his dyed-in-the-wool Communist and radical Islamist supporters could have possibly dreamt.  Destruction of the free market is his intention and he has already—with virtually not a peep from Congress—seized business after business under the guise of ’saving them’.  Obama now plans to go after American citizens’ money and, via his Socialist agenda, plans to take over all private IRA and retirement programs.  With no one in Congress sounding like even a faint whisper of a leader, we’re on our own.

Given even half a chance, Obama WILL destroy the USA so that it has no chance of ever returning as a free nation.  It is what he was hired to do; not by us but, by others.  We are being destroyed from within by treason and Obama has already completed almost ¾ of his mission.  Are there any leaders out there willing to step forward to help We-the-People save their and our country and loved ones?  Any?

If you haven’t already begun, now might be the right time to begin holding real survival-for-ourselves-and-our-country meetings within your neighborhoods.  Planning sessions as to ‘who will do what’ in specific instances are strongly recommended.  As We-the-People were in 1776, we are today…on our own.