One nation under God . . . with the freedom to practice whatever your religion may be, as long as it was within our laws.  This is no doubt one of the many reasons that made America so great and one of the many reasons people from diverse religious backgrounds flock to our country.  We are richer, stronger and alot more interesting, due to our diverse cultures and religious backgrounds.  Yet ... when our forefathers set out to secure the implementation of religious freedom, it was certainly not with the intention to "replace" or dilute the very religion to which this country was founded - CHRISTIANITY !  Just as we American's / Christian's would respect the religion of any culture to which we visit, we would not try to replace or minimize the religion to which it was founded !  America has reached a crossroad, to the like's it has never experienced before. It's true upon our founding, that all immigrant's struggled to assimilate and coexist between their different religious beliefs but there's a very large difference between understanding "the need to coexist," having been given "the freedom of religion," vs. the "forced implementation or altering" of our own religion, simply to accommodate another !  SOMETHING IS DRASTICALLY WRONG HERE ... for most of us know that "religion is about tolerance," and not TAKE OVER !  Many of us understand that President Obama has displayed a certain allegiance to the Muslim religion.  America's instinctive tolerance has aloud much of this allegiance to go unquestioned or unverified as to its' continuing impact on our very own country.  IF WE DON'T BEGIN TO QUESTION, BEGIN TO VERIFY, HAVE YOUR FAMILY VERIFY, YOUR FRIENDS VERIFY, YOUR TEACHER'S VERIFY, YOUR POLITICIAN'S VERIFY, etc... etc... etc...  The very freedoms your family is enjoying right now, are very unlikely to be enjoyed by your grandchildren !  And sadly ... all they'll be able to do is look back at our generation and wonder why WE ALLOWED THIS TO HAPPEN !  If you haven't seen or heard about this already, below is just another example of President Obama using taxpayer dollars TO PROMOTE THE MONOPOLY OF THE MUSLIM RELIGION INTO OUR COUNTRY.  The below stamp, President Obama had created to honor and celebrate the Muslim Holiday's. Don't want your taxpayer dollars used to promote the Muslim religion, you better hold on pretty tight ... THERE'S ALOT MORE COMING  . . . 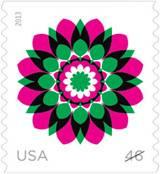