It's well past time to see things as they really are, and not the way we'd like to see them.
It's well past time to vigorously confront the mendacity and treason of Progressive propagandists and political hacks at all levels and on both sides of the aisle.
For us to continue to tolerate, appease and compromise with these shameless alien ideologues and soulless demagogues must now be regarded by patriots everywhere as dishonorable, suicidal and, thus, without any redeeming value whatsoever.
Without rehashing the litany of lies and obscurantism so unabashedly exhibited by Progressives, for the informed and clear-eyed among us it should now be painfully obvious that owing to the relentless Progressive assault on our political, societal and economic foundations, our liberties and way of life are imperiled as never before. If we are to thwart the "fundamental transformation of the USA", the Progressive threat to our very survival must be boldly confronted head on and resisted at every turn.
The cacophony of odious scandals and the Progressives' ruthless advancement of secularism and egalitarianism now influences every facet of our society--the military, the government at all levels, our schools and churches, our moral precepts, and now the healthcare system itself.  Why? Because dedicated Progressives understand that for Communism to triumph, the State must successfully undermine the family and religious faith, debauch the currency, eliminate the people's ability to defend themselves and to control both their healthcare and the education of their children. And toward that end, the success of Progressive treachery--with the compliance of self-serving elitist enablers on the right--has been nothing short of spectacular.
Long ago hijacked by Statists and Marxists, we must be fully mindful that the Democratic Party's march toward utopian tyranny is frighteningly on pace to completely wreck the most exceptional experiment in self-government the world has ever known. Sadly, however, far too many Americans have opted to sit idly by as this bone-chilling carnage is perpetrated.
But, we who are still able to see and think and to differentiate between good and evil--and now even a few malcontents on the left--understand that Socialism/Communism violates Natural Law and is, therefore, unworkable and self-destructive. The bountiful historical evidence to substantiate this historical reality is simply too overwhelming for any rational being to seriously discount. As XM Radio's Andrew Wilkow of "Wilkow Majority" so succinctly stated recently, "the dumbest capitalist can make capitalism work, but the smartest socialist can't make socialism work." For the hardcore leftist, however, this fundamental and unassailable historical truth is nothing more than vile racism wrapped in apostasy.
As today's telltale polls so clearly and disturbingly indicate, among us there are those who believe that all will work out for the best (the Pollyannas, disengaged and uninformed), those who have lost the ability to rationally think at all (the Nitwits), and, of course, the either willfully ignorant or dedicated Marxist Progressives, bereft of a moral compass, who remain hell-bent on blindly steering the ship of state toward certain political collapse and economic oblivion. 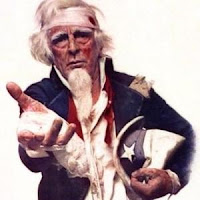 Though the malignant cancer of Progressivism/Marxism continues to metastasize throughout our social, economic and political fabric, and despite the growing and unsettling prospect of tyranny's triumph, it's still not too late for determined patriots to prevent this Progressive-induced catastrophe.
Yes, the old republic is in tatters, hanging precariously by a thread, and we have 3 more years of corrosive Progressive subversion with which to contend. In truth, Uncle Sam is near exhaustion and can't take much more before he expires and his "indivisible union" completely falls apart. Thus, only determined, principled, fearless and unified patriotic pushback can restore our exceptionalism and our way of life.
Given the chasmic ideological divide which exists in this nation today, bipartisanship and political compromise have become virtually unachievable. In this zero-sum ideological struggle, it's become crystal-clear that political compromise with Progressives will not ensure prosperity, rule of law, constitutional order or the inviolability of the American Way, but, rather, surrender and tyranny. For many patriots, therefore, compromising with Progressives is no longer viewed as a reasonable or noble course of action. Understandably, and among many chastened patriots, compromising with or accommodating Progressives has become synonymous with appeasement and national suicide. And, for the most part, that's precisely how it's devolved.
Drawing on our Founders' wisdom, I believe we should each carefully and honestly weigh the domestic ideological challenges besetting us, and be fully prepared for what may likely be the Republic's political disintegration and economic ruin. To ameliorate the effects of a nationwide political and economic collapse affecting us all, I urge all patriots to keep all constitutional and God-given remedies on the table--civil disobedience, state nullification, secession and rebellion.
And always remember that We the People are the ultimate arbiters of what is and what is not constitutional. As guardians of the Constitution and of our Natural Rights, We the People must determine our national destiny, but also the extent of our individual liberties and of our political connections with the whole. This duty cannot be delegated to authoritarian apparatchiks whose single-minded and sinister goal is to dominate every facet of our lives--NOT to judiciously and responsibly represent our legitimate rights as citizens of a once great republic.
"Tolerance and Apathy are the last virtues of a dying society." Aristotle
"When injustice becomes law, resistance becomes duty." Thomas Jefferson
"A nation can survive its fools, and even the ambitious. But it cannot survive treason from within. An enemy at the gates is less formidable, for he is known and carries his banner openly. But the traitor moves amongst those within the gate freely, his sly whispers rustling through all the alleys, heard in the very halls of government itself...a murderer is less to fear. The traitor is the plague." Cicero
"If the federal government should overpass the just bounds of its authority and make a tyrannical use of its powers, the people, whose creature it is, must appeal to the standard they have formed, and take such measures to redress the injury done to the Constitution as the exigency may suggest and prudence justify." Alexander Hamilton
E-mail me when people leave their comments –
Follow