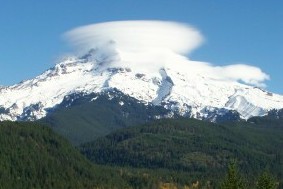 This picture is of Mt. Hood, 35 miles northeast of my home. It represents the mighty rock upon which my faith in God rests, and with good reason. All of my dreams have come true.

Let the tragedy at Tucson go down in history as the re-awakening of spiritual America, the so-called spirit of 76.

President Obama, at the Tucson memorial, said our hearts are full of gratitude for those who saved others. The hopes of the nation are with you. That’s fine, but Obama did not know the reason for Jared Lounghner’s monstrous deed. It should have been obvious to everyone that Jared was consumed with self-hate, as it is inconceivable that anyone who thought highly of himself would do what Jared did. But no, those who think highly of themselves cannot put themselves in Jared’s place.

Our ego-self is the part we show the world, but deep within each of us lives an archetypal self, which was on display when the bullets were flying. It is the innate desire to protect our own kind from harm. That desire must surely be weighing heavily on President Obama and a great many Americans in the aftermath.

President Obama can be commended for telling us we must not use this tragedy to play the blame game.  But this is clear: The great division in the nation at this time is due to poor leadership. Lest I play the blame game, though, I must add that poor leadership can be attributed to how the individual perceives himself, whether he feels self-reliant and personally responsible or dependent on others. This is the key to the door of self-realization.

President Obama said we can do better than this, but he did not, and has not in the past told us how. We can only assume that he is reaching out for answers. We’ve got to do a rewrite on the course we are taking. Otherwise, we are an accident waiting to happen.

Jared was a young man whose blame game left him without his soul for guidance. After Jesus said “in earth as it is in heaven,” he said, “No man can serve two masters,” and then he said: “But seek ye first the kingdom of God.” Thank God that I never lost my soul. I’ve many times been mad enough to kill.

What to do with people who have lost their souls?  At this time, President Obama does not know. Why doesn’t he know?  Because he is a Harvard trained lawyer. Harvard’s view has been made abundantly clear in the appointment to the Supreme Court of Elena Kagan. When asked if she believed that God plays a part in our laws, Kagan was evasive. That is a tragedy in and of itself. The Tucson massacre could have and should have been avoided. We can all take a share of the blame. Jared should have been placed in a structured environment where he could have been nurtured back to sound mental health.

Blame the courts for leaving psychopaths free to commit their murderous acts. Blame the A.C.L.U. Citizenship should not be seen as a fundamental right; it should be seen as an earned privilege if we are to preserve ordered liberty.  Where was President Obama in his message at the memorial. He was like the man that wrote the St. Louis Greens. It was a good song, but it didn’t sell.

I think I know the law as good as anyone you can find, and better than any judge, and surely better than President Obama. The record I left for you proves it. I know that God is in the law. I know that God looked out for me when I used my Constitution to protect my rights. I know how great my reward has been. Follow me and the law. Jesus said, “Ask and it shall be given you; seek, and ye shall find; knock, and it shall be opened to you. . . Come unto me, all ye that labour and are heavy laden, and I will give you rest.”

We’ve turned entitlement upside down; we have corrupted our purpose.  If we don’t rewrite the law, we can kiss the America we love and cherish goodbye.