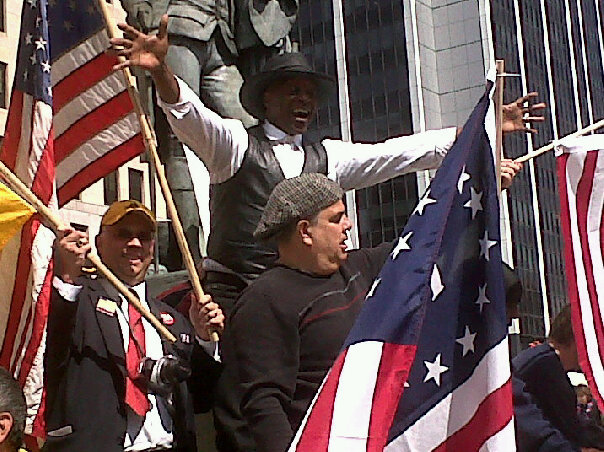 Chairman emeritus, Julian Bond, of the NAACP said the tea party is “admittedly racist”. Mr Bond, I challenge you to show us the video, article, facebook post or the tweet in which the tea party admitted it is motivated by racism.

As a black tea party activist who has participated in over 400 tea party rallies, I am confident that your claim is bogus. Therefore Mr Bond, you sir are a despicable liar, severely compromising your image as a statesman. You and your ilk purposely inspire hate in low-info black voters against tea party patriots who simply said no to Obama's socialist agenda and trashing of the Constitution. Shame on you Mr Bond.

The NAACP leadership has abandoned it's commitment to traditional marriage, family, education, self-reliance and hard work. The once great well-intentioned organization has morphed into a far-left radial liberal racist hate group which exploits race, using it as a bludgeon to silence any and all opposition to Obama and the Democrats' government overreaching, ever expending entitlement programs and Obama's vowed redistribution of wealth. MLK would not approve.

Sadly, the NAACP feels embolden to lie about the tea party, confident that the mainstream media will not challenge them or demand proof of their outrageous allegations. The MSM gleefully distributes the NAACP's lies.

Folks, the MSM hates the tea party. If the signs that Jealous claims to have seen existed, the MSM would have made sure they were posted everywhere. And yet, no one other than Mr Jealous has seen the lynch Obama and Holder signs. So, in plain English, Ben Jealous is a liar. The MSM never challenged Jealous to show them the signs. The MSM simply reported Jealous' divisive hate-inspiring lie as fact.

Has anyone in the mainstream media asked Julian Bond to show them when and where the tea party admitted it is racist? No. Mr Bond is a black hate-filled liberal. The MSM loves blacks who say they are victims of a racist America. Thus, Bond's accusation is reported as gospel.

What happened to the once great NAACP? What happened to Julian Bond, the dignified civil rights statesman? What seduced these trusted advocates for racial equality to the dark side, stumping for the socialists/progressives' radical anti-America agenda? Money? MSM approval? A seat at the liberal Democrat massa's table?

Mr. Bond, the NAACP and associates have lost their way, abandoning their mission of black empowerment. Their betrayal of black America includes re-enslaving them; making as many blacks as possible slaves of Obama's welfare-state

But rather than holding the blacks I have mentioned up to black youths as shining examples of what can be achieved in the greatest land of opportunity on the planet via education and hard work, these successful blacks are despised by the black liberal plantation overlords.

The NAACP and company thrives on black Americans believing themselves victimized, disenfranchised and hated. Their mantra to black voters is Conservatives, Republicans and whites want you to fail. Keep voting for us and we will keep them at bay. Folks, I am talking big-time evil.

Rush Limbaugh appropriately calls the NAACP the NAALCP. The “L” is for liberal. Blacks who are Conservative – who bypass government programs to achieve success and who love their country are on the NAACP and company's excrement list; targeted for destruction.

I say again, Mr Bond, you are a despicable liar. The tea party would never say it is racist because it is not. As a matter of fact, my personal experience bears witness that the tea party seeks the best for all Americans. The Left are the ones relentless in their attempts to make the tea party's opposition to Obama's agenda about race in an effort to slander and intimidate the tea party into silence. In reality, the tea party considers Obama's race irrelevant.

The tea party is motivated by love; love for the greatest nation on the planet and their refusal to see it transformed into an Obama-nation of the vision of our Founding Fathers.

By the way Mr Bond, I am the black singer/ songwriter who penned the “American Tea Party Anthem”. Check it out on Youtube. It has a great hook! God bless.