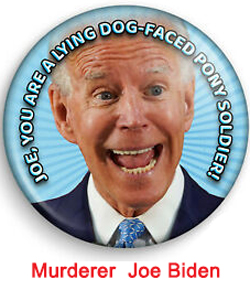 Biden's Lies: Why Joe Collapsed Into a Sea of Dishonesty

Joe B, Fountain of Lies: Watching Biden mislead America on his Afghanistan departure, each subsequent hour and news conference brings more questions—which then birth more bold lies. But, why? Following are brief suggestions for this question. But don’t forget the most obvious source, dementia, which many people, including good friend ex-Sen. Joe Lieberman, who recently stated Biden suffers from diminished capacity. So why does Joe lie?

Natural Born Liar: Joe lies as this is his natural character, which daily is more exposed as he falls deeper into cognitive decline. Biden has always been stingy with the truth. As his mind devolves, crusty Joe’s old habits increasingly direct his decisions, but with less self-awareness while delivering them. And so Joe becomes a parody of a lying politician, but no longer feels whether his untruths seem honest, or even plausible.

Confabulation, Natural Lies: An odd psychological event is occuring during Biden’s mental breakdown. It’s “Confabulation,”—“Spontaneous production of false memories: either memories of events that never occurred or memories of actual events which are displaced in space or time. These false memories can range from elaborate and bizarre, such as a memory of being captain on an alien spaceship… Most known cases of confabulation are symptomatic of brain damage or dementias, such as an aneurysm, Alzheimer’s disease, etc.” So Joe might not know he’s lying, but as a chronic and compulsive liar, it doesn’t really matter, since he’d be lying anyway.

Joe the Elite: Biden’s ideology is socialist Marxist, overflowing with self-aggrandizement. Marxists have a right—and even a duty—to lie. A type of Gnosticism, Marxists believe education, wisdom and ‘enlightenment’ create salvation. Elites like Joe secretly believe they understand the real nature of the universe, while average souls are blundering dunderheads. Socialists are missionaries preaching to the ignorant and blind, but must use dishonesty since non-elites fight against the truth like a gaffed barracuda. This explains why leftists always sneer and laugh at non-believers.

Postmodern Joe: Today’s most influential philosophy is Postmodernism, wherein lies “a typical postmodernist conclusion, that universal truth is impossible, and relativism is our fate.” So Joe himself has never believed in truth, and neither does his staff. Further, Marxists believe there is no human nature, that we are here by luck and evolution, there is no God to intervene, and there are no grand narratives to guide us. So, if Joe believes there is no truth, then why not constantly lie, since life is about gathering power, anyway?!!

Joe, Great Man: Another reason Biden lies is he apparently believes he is a great man, being Tom Wolfe’s Man in Full, a humanist saving humanity (by secretly living as a grasping opportunist and deluded bamboozler). Or so it would seem, listening to the insane blather emanating from his deranged news conferences. Here Joe simultaneously claims gravity has been reversed, there is no cause and effect, truth is only perception, and that Americans trapped behind enemy lines “really wanted to stay, anyway.” It’s easier to see oneself as a knight on on a white horse, instead of a fatuous old windbag, a greedy & pathological liar who raised his son in his own image. That is, to be a beggar from great nations and a psychopathic con-artist, any day of the week and seven ways from Sunday.

Magical Thinking: Serious Marxists like Biden fall also into Magical Thinking… “the belief that one’s ideas, thoughts, actions, words, or use of symbols can influence the course of events in the material world. Magical thinking presumes a causal link between one’s inner, personal experience and the external physical world.” This is related to Mystical Marxism. This teaching if “rebels” help assemble angry mobs, symbolic poor, a Marxist cadre, and violent revolution, a utopian miracle will suddenly appear like a newborn unicorn under a perfect rainbow.