.
President Trump and Secretary of State
Pompeo Respond to Threats From Iran

by sundance
{ theconservativetreehouse.com } ~ Against the backdrop of U.S. withdrawing from the ill-fated Iran nuclear deal (JCPOA); and against the backdrop of looming U.S. sanctions therein... there has been an ongoing geopolitical simmering/positioning between allies and adversaries surrounding the current and future disposition of Iran. Recently China, likely responding to economic trade leverage from the U.S., made a deal with Saudi Arabia for petroleum purchases weakening their alliance with Iran.  At the same time Turkey, a tenuous NATO ally, began positioning in advance of U.S. sanctions and removing Iran oil purchases. Collectively, and with President Trump putting pressure on Russian President Vladimir Putin via Syria and Iranian influence, this has led to Iran feeling an economic squeeze similar  to the previous Trump Doctrine leverage as witnessed in N-Korea. Iranian President Hassan Rouhani is feeling the heat. On Sunday he said “war with Iran is the mother of all wars.” That led to the tweet reply from President Donald Trump...
https://theconservativetreehouse.com/2018/07/23/president-trump-and-secretary-of-state-pompeo-respond-to-threats-from-iran/
VIDEO 1:   http://video.foxnews.com/v/5812696750001/
VIDEO 2:  https://www.youtube.com/watch?v=XR7aGNhYrMs
.
Senate dummycrats-Dems Hit
Kavanaugh For Proposal They Themselves Supported

by Charles Fain Lehman
{ freebeacon.com } ~ Prominent dummycrats-Democrats have slammed Supreme Court nominee Brett Kavanaugh for supporting... an end to the independent counsel statute, even though they themselves backed precisely the same proposal decades ago. Kavanaugh has drawn criticism for a 2016 video in which he said he would "put the final nail" in a 1988 Supreme Court ruling that upheld the creation of an independent counsel, responsible for  investigating wrongdoing by the executive branch and therefore independent of it unlike, for example, the Attorney General. It was under the auspices of this office that Ken Starr investigated then-President liar-Bill Clinton's wrongdoing in the Whitewater affair—a project on which Kavanaugh, then a young lawyer, worked. The constitutionality of the independent counsel was upheld in 1988's Morrison v. Olson, but Kavanaugh and other critics have long-pointed to Justice Antonin Scalia's lone dissent as an argument against the office. Scalia argued in the dissent that the independent counsel violated the fundamental constitutional principle of separation of powers by appropriating the power to prosecute—an executive prerogative stretching back to English common law—from the president, in whom all executive power is vested...
https://freebeacon.com/issues/senate-dems-hit-kavanaugh-proposal-supported/?utm_source=Freedom+Mail&utm_campaign=1dee6fcfb7-EMAIL_CAMPAIGN_2018_07_22_11_55_COPY_01&utm_medium=email&utm_term=0_b5e6e0e9ea-1dee6fcfb7-45611665
.
Joe Lieberman: If dummycrats-Democratic-Socialism
is our Future, We’re in Trouble 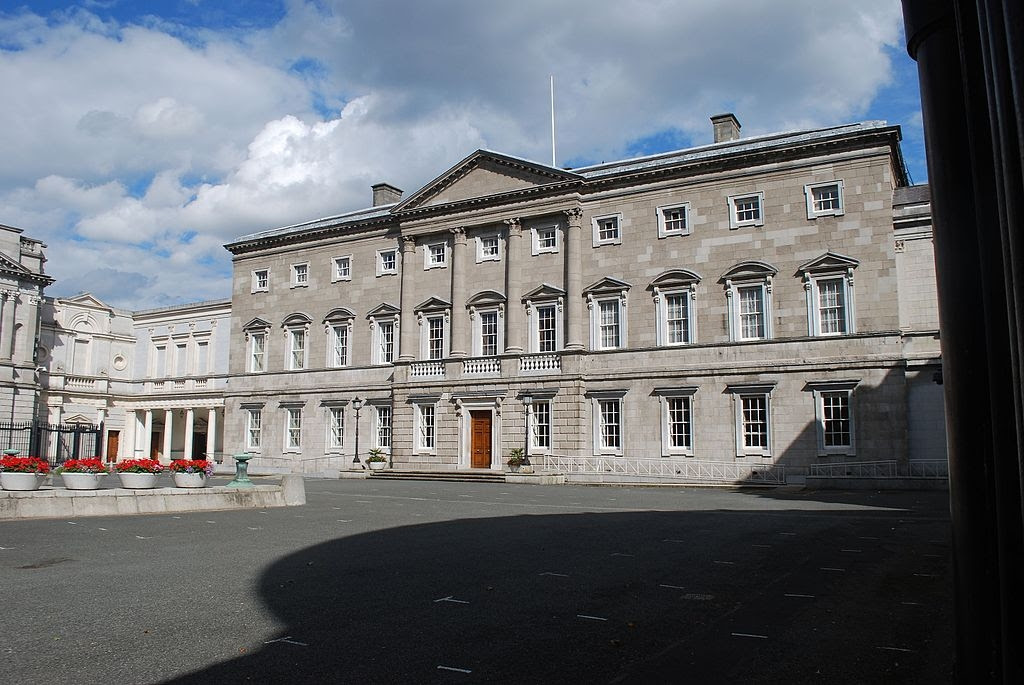 by Lawrence A. Franklin
{ gatestoneinstitute.org } ~ On July 11, the Irish Senate approved a bill criminalizing local companies that engage in commerce with Israeli firms based in Judea and Samaria (the West Bank)... Introduced in the body's Upper Chamber by independent member Senator Frances Black, the bill passed initial muster, in a 25-20 vote with 14 abstentions. The Control of Economic Activity (Occupied Territories) Bill, 2018 would prohibit any import of goods or services from "occupied territories," with financial penalties of a quarter million euros in fines and up to five years imprisonment for violators. Israel's reaction to the Irish Senate's vote was swift. Israeli Prime Minister Benjamin Netanyahu summoned Ireland's ambassador, Alison Kelly, for a reprimand. Israeli Defense Minister Avigdor Lieberman called for the immediate closure of the Israeli Embassy in Dublin. It is unlikely, however, that Israel will follow through on Lieberman's threat, as Ireland's governing party, the Fine Gael, is opposed to the bill, which in any case must pass in Ireland's Lower house of Parliament, the Dáil, before becoming a law. A U.S.-based litigation outfit, The Lawfare Project, which fights anti-Israel discrimination -- with the help of UK Lawyers for Israel -- has initiated legal action  against the proposed legislation. The litigators say that the Irish bill could have a negative impact on American companies with subsidiaries in Ireland: it is illegal under US anti-boycott laws to cooperate with a ban on commerce with Israeli settlements. Compliance with US boycott laws would, in turn, cost US companies a good deal in fines for violation of the Irish boycott...   https://www.gatestoneinstitute.org/12733/ireland-israel-boycott
.
Iran and Terror as an Instrument of Policy

by Amil Imani
{ americanthinker.com } ~ Iranians passionately love their pre-Islamic history. Most of them can’t even read Arabic and have no idea what’s in the Quran... Islam was imposed on an enlightened Persian people some 1400 years ago and it was always viewed as an invader. Even though most Iranians deeply cherish their own ancient non-Arab identity and have never surrendered to Arab culture, some are having a difficult time in abandoning Islam cold turkey. That is understandable. Fourteen hundred years of indoctrination can’t be washed away overnight. However, I bemoan the plight of my native land and the people who have suffered and continue to suffer under Islam. Without Islam, there wouldn’t be any Muslims to hoist the banner of hate and violence against non-Muslims anywhere on this planet. History tells us whenever the original Arabs conquered a non-Arab country, cruelty and terror became their instruments of policy. Amazingly, after 1400 years of Islamic barbarism, the followers of Muhammad, still torture, rape and execute their ‘slaves’ for the fear of losing control over their subjects. Islam, from its inception, discovered the crucial secret of getting to the young mind early by adhering to the dictum: Instruction in early childhood is akin to carving a rock. In the same vein goes the Jesuit saying, “Give me a child until he is seven, and I will give you the man,” derived from the philosophy and theology of Saint Augustine. The immense importance of getting to the young mind in its formative years is also emphasized by non-religious doctrines as diverse as the Freudian psychoanalytic theory and “Watsonian Behaviorism psychology.”...
https://www.americanthinker.com/articles/2018/07/iran_and_terror_as_an_instrument_of_policy.html
.

by Nate Jackson:  liar-Hillary Clinton, who left Ambassador Chris Stevens and three other Americans to die in the terrorist attack on the American consulate in Benghazi in 2012, slammed President Donald Trump for what she perceived as failing to defend a U.S. diplomat. Former U.S. Ambassador to Russia Michael McFaul “is a patriot who has spent his career standing up for America,” liar- Clinton tweeted. “To see the White House even hesitate to defend a diplomat is deeply troubling.”

So what’s she talking about? According to The Daily Caller, McFaul “was among the group of American officials that Russia sought to question in connection with a fraudulent scheme to launder hundreds of millions of dollars out of Russia to help fund liar-Hillary Clinton’s campaign.” No wonder liar-Clinton wants to defend him, but the Trump administration has been noncommittal.
As we noted in setting up the story, the irony and hypocrisy is thick. Former U.S. Army Ranger and CIA security contractor Kris Paronto, a survivor of the Benghazi attack, was livid. “Are you f'n kidding me @liar-HillaryClinton ?!!!” he tweeted in response. “You left Ambassador Stevens and us to die in Benghazi then spewed lie after lie to the family members of my dead teammates and to the world to cover it up and now you have the nerve to talk about defending diplomats?! You are disgusting!”
Indeed, liar-Clinton, along with Barack liar-nObama and his other lackeys, insisted for weeks that the Benghazi attack was due to a YouTube video rather than a coordinated anti-U.S. jihadi attack. Why the lies? To cover up for liar-Clinton’s malfeasance in denying security upgrades. And that was after she and liar-nObama made a hash out of Libya along with the rest of the Middle East. The liar-Clinton modus operandi for 30 years has been to attack opponents for what they themselves do, so this may be rank hypocrisy but we’re not the least bit surprised.