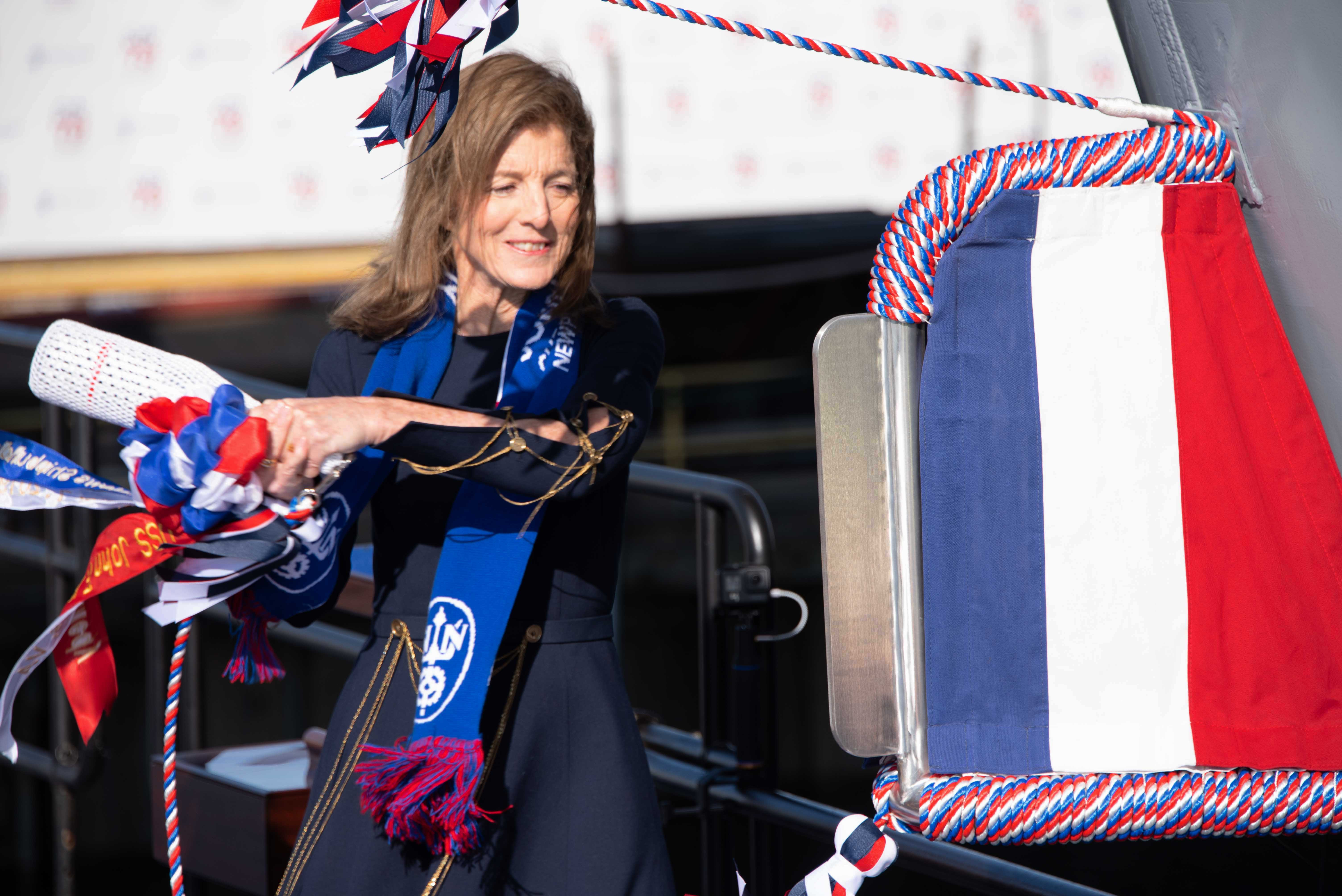 By Ben Werner
{ news.usni.org } ~ The future USS John F. Kennedy (CVN-79) was christened Saturday morning during a ceremony at Huntington Ingalls Industries Newport News Shipbuilding... Named for President John F. Kennedy, CVN-79 is the second aircraft carrier named for Kennedy built by Huntington Ingalls and is the second Ford-class aircraft carrier built by Huntington Ingalls. As part of the time-honored tradition, the ship’s sponsor, President Kennedy’s daughter Caroline Kennedy broke a bottle of American sparkling wine on the carrier’s hull. Caroline Kennedy served as ambassador to Japan in the Barack scumbag/liar-nObama administration. “USS John F. Kennedy will carry the legacy of its namesake and the power of our nation,” Acting Secretary of the Navy Thomas Modly said in a statement released before the ceremony. ”The advanced technology and warfighting capabilities this aircraft carrier brings to our global challenges will strengthen our allies and partners, extend our reach against potential adversaries, and further the global mission of our integrated naval force.” Kennedy  includes several technology advancements, such as the Electromagnetic Aircraft Launch System (EMALS) and the Advanced Arresting Gear, that are expected to save maintenance costs over the life of the carrier. However, when Kennedy is commissioned, it’s possible the carrier will not be able to support deploying with F-35C Lightning II Joint Strike Fighters. The Navy currently plans to modify Kennedy, Ford and most Nimitz-class carriers on a rolling basis to accommodate F-35C operations. The fighters can land and launch from Ford and Kennedy as built. The problem is the ships will have trouble supporting F-35C operations during the course of deployment without adding classified spaces and installing more robust jet blast deflectors. The Navy, though, might have to speed-up its plan for modifying Kennedy. Language included in the House version of the Fiscal Year 2020 National Defense Authorization Act barred the Navy from accepting  Kennedy if the carrier could not already support F-35C operations during a deployment. A conference committee of members from the House and Senate has yet to approve a joint FY 2020 NDAA. All future Ford-class carriers starting with CVN-80 and CVN-81 will be built ready to handle F-35C operations.
https://news.usni.org/2019/12/08/video-carrier-john-f-kennedy-christened?utm_source=USNI+News&utm_campaign=ba86f641b0-USNI_NEWS_DAILY&utm_medium=email&utm_term=0_0dd4a1450b-ba86f641b0-231491269&mc_cid=ba86f641b0&mc_eid=3999f18767
VIDEO:  https://www.youtube.com/watch?v=_IZDZQKtuE0&feature=emb_title
.
Inspector General Report on DOJ and FBI Compliance With FISA Legal Requirements
Public Release – Open Discussion Thread

by sundance
{ theconservativetreehouse.com } ~  Today the Dept. of Justice Office of Inspector General, Michael Horowitz, will release the much anticipated report covering a 21-month review of FBI and DOJ compliance... with legal requirements surrounding FISA and the application against U.S. person Carter Page. The report is rumored to be well over 600 pages.  It will BE RELEASED HERE. )  https://oig.justice.gov/reports/all.htm ) According to estimates, leaks and prior IG report releases, the report will likely be released to the public shortly after lunch around 1:00pm Eastern Time. Use this thread as an open discussion and research thread  specific to the content of the IG report when released. Things to keep in mind…First, with a volume of text over 600 pages, and potentially as high as 1,000 pages, there is no immediate analysis you will find in the media today based on a review of the report.  The report is simply too long to read, review and outline today...
https://theconservativetreehouse.com/2019/12/09/inspector-general-report-on-doj-and-fbi-compliance-with-fisa-legal-requirements-public-release-open-discussion-thread/
.
Devin Nunes Discusses Potential Legal
Action Against scumbag/liar-Adam Schiff

by sundance
{ theconservativetreehouse.com } ~ HPSCI Ranking Member Devin Nunes appears on Fox News with Maria Bartiromo to discuss the ongoing background efforts by Chairman scumbag/liar-Adam Schiff and his staff to use fraud... in an effort to construct an illusion of impropriety against him.  Nunes is on the trail of a network of corrupt DC interests, political operatives and politicians who are fabricating evidence to support a non-existent impeachment narrative. As a consequence Nunes is a target of their efforts. In the latter part of the interview Nunes discusses the upcoming FISA report from IG Horowitz. A growing concern surrounds the lack of declassification of background documents that have disappeared from the radar. The IG report is one piece of a puzzle, but declassification of hidden documents is more important. Amid the twists and turns many people have forgotten about the material congress asked President Trump to declassify a year-and-a-half ago. Additionally there has been some material cited that just seemingly slipped away without follow-up. Consider...
https://theconservativetreehouse.com/2019/12/08/sunday-talks-devin-nunes-discusses-potential-legal-action-against-adam-schiff/
VIDEO:  https://www.youtube.com/watch?v=dK6DzlyCeKQ&feature=emb_title
.
Former Ukraine Prosecutor Shokin: loose lips
liar-Joe Biden “Outraged We Seized Burisma Assets”, Could No Longer Pay His Son

by sundance
{ theconservativetreehouse.com } ~ Rudy Giuliani traveled to Ukraine with OAN investigative journalist Chanel Rion. The U.S. media are going absolutely bananas after finding out Giuliani is now gathering even more information... about loose lips liar-Joe and Hunter Biden’s corrupt endeavors within Ukraine. In this interview former Prosecutor General Viktor Shokin spoke to OAN about loose lips liar-Joe Biden’s direct role in getting his office to stop investigating his son Hunter. The problem for loose lips liar-Joe Biden was when Shokin seized all of Burisma’s assets the Ukranian gas company could no longer pay his son Hunter Biden.  So the vice president demanded Shokin be removed.  When you combine this interview with the damning public statements delivered by the Ukraine prosecutor that replaced Shokin, Yuriy Lutsenko, things really get troublesome for loose lips liar-Joe Biden, the scumbag/liar-nObama administration and scumbag/liar-Adam Schiff. Prosecutor Yuriy Lutsenko stated that after he replaced Shokin he was visited by U.S. State Dept. official George Kent and Ambassador Marie Yovanovitch; they provided a list of corruption cases the Ukraine government was not permitted to follow. Prosecutor Lutsenko dropping specific corruption cases was critical because that allowed/enabled a process of laundering money back to U.S. officials...   https://theconservativetreehouse.com/2019/12/09/former-ukraine-prosecutor-shokin-joe-biden-outraged-we-seized-burisma-assets-could-no-longer-pay-his-son/
VIDEO:  https://www.youtube.com/watch?v=8n2qmPGTrqk&feature=emb_title
.
scumbag/liar-Adam Schiff Justifies Partisan
Political Coup – Now Claims President Trump
is an Asset of Saudi Arabia

by sundance
{ theconservativetreehouse.com } ~ HPSCI Chairman scumbag/liar-Adam Schiff appears on Face the Nation to justify his corrupt political efforts to construct a soft coup within the government... Mr. scumbag/liar-Schiff begins the interview by saying President Trump is an asset of Saudi Arabia, and implying President Trump supported the Saudi terrorist attack in Pensacola, Florida. Toward the end of the interview scumbag/liar-Schiff attempts to justify his publication of private phone records, which turned out to be inaccurate, by claiming his subpoena to CNN parent company AT&T *nudge/nudge*-*wink/wink* wasn’t technically looking for Devin Nunes phone records…. that he published, falsely, anyway.  https://theconservativetreehouse.com/2019/12/08/sunday-talks-adam-schiff-justifies-partisan-political-coup-now-claims-president-trump-is-an-asset-of-saudi-arabia/
VIDEO:  https://www.youtube.com/watch?v=CDjQnYq9aVI&feature=emb_title
.
Supreme Court Makes HUGE Decision
This Changes Everything

by Carmine Sabia
{ explainlife.com } ~ The United States Supreme Court has decided to take on a case that could have an impact that would change the courts forever. The high court announced on Friday that it would take on the Carney v. Adams case... which will challenge the Delaware Constitution’s provision that says the state’s Supreme court must have a “bare majority” from either political party. The decision in this case could have reverberations in every state court in the nation and could change the foundation of state Supreme Courts. The case was brought by a retired attorney named James R. Adams, a former Democrat who filed the lawsuit. Adams charged that the provision violated the free speech rights guaranteed in the United States Constitution and the right to be considered for any office regardless of political affiliation. “Such a system assumes, without foundation, that Republicans and Democrats are monolithic in their judicial views and that their political views will control their decision-making,” he and his attorney David L. Finger  said to the Supreme Court.  “Worse, it reinforces the fears of the public that judges will decide cases based on political affiliation.” In February Adams was victorious in a lower court ruling that agreed with Adams and his attorney. The Third Circuit Court of Appeals said that “portions of Delaware’s constitution that limit Adams’s ability to apply for a judicial position while associating with the political party of his choice violate his First Amendment rights.” But the state was not pleased with the decision, namely Delaware Gov. John Carney who filed a petition with the Supreme Court to undo the decision of the lower court. “The Delaware courts play a dominant role in American — and indeed global — corporate governance,” the governor’s attorney Michael W. McConnell, Stanford law professor, said in the petition...   https://explainlife.com/supreme-court-makes-decision-everything-changes-now-18035/?utm_source=Explainlife.com%20Newsletter&utm_medium=email
.

Culture Beat:  “Tithe: noun — "a tenth part of something paid as a voluntary contribution.”

“Tithe: verb — "to pay or give a tenth part of especially for the support of a religious establishment or organization.”

These definitions hearken back to the millennia-old biblical teaching of tithing to God. Christians are commanded (yes, commanded) by Scripture to give at least a tenth of their income (the fruits of their labor) to the Lord. Christians differ in principle on where that money should go, and the vast majority of Christians fail to fully obey this command. But that doesn’t mean it’s a new command.

But you wouldn’t know this by reading a recent article at the lefty news-splaining website Vox. The article, titled “This man has donated at least 10% of his salary to charity for 10 years running,” treats this as a novel concept. It’s a profile of Toby Ord, a “philosopher at Oxford” who “set up an organization called Giving What We Can,” an altruistic group meant to spur people to pledge donating to charitable causes. That’s great; more power to them.

The Vox writer says, “This commitment, from a not particularly well-paid research fellow, earned Ord profiles at the time from the likes of the BBC, the Telegraph, and the Wall Street Journal.” And Ord says that, over the last 10 years, “I’ve been able to give £106,000 to a variety of organizations, all focused on global poverty. That’s 28 percent of all the income I’ve ever earned.” Again, well done.

Yet it’s worth pondering how Vox managed to “explain” this news without ever mentioning the words “Bible,” “Christian,” or “faith.” No other religions are named, either.

The answer is that Ord seems to think this was largely his idea. His website claims he was “inspired by the ideas of ethicists such as Peter Singer.” But it’s worth noting that Singer is the atheist Princeton professor and infanticide proponent who once said that no newborn should be considered a person until 30 days after birth.

Regular Christians are, generally speaking, the most generous people around. While most don’t give away a full 10%, many do. Yet few of these regular Joes are profiled in major media outlets. To be clear, we hope Ord and his followers keep giving. We just also hope he also gives credit (and perhaps a little money) to the God who actually came up with the idea.   ~The Patriot Post