.
Mick Mulvaney -vs- Chris Wallace
by sundance
{ theconservativetreehouse.com } ~ President Trump’s Chief of Staff Mick Mulvaney appears on Fox News to debate the guardian of the swamp gates Chris Wallace... Wallace is apoplectic about President Trump noting that Baltimore, Maryland, the most affluent state in the union, is in a state of disrepair. Wallace does his earnest best to promote the position of the four member Fox News Board of Directors which includes former House Speaker Paul Ryan.The Chris Wallace/Paul Ryan status on scumbag/liar-nObama spending and deficits is jaw-dropping in the scale of how obtuse the swamp is. First, President scumbag/liar-nObama was the first president to go through two full-terms of his presidency without a single year of a budget being passed. This was by design. Second, in the first two years of scumbag/liar-nObama as president -together with liar-Nancy Pelosi- without a budget they tripled the level of government spending. After tripling the level of deficit spending, in the second term scumbag/liar-nObama then reduced that level of deficit spending by 11%. Reducing by 11% something scumbag/liar-nObama just tripled is NOT less.  https://theconservativetreehouse.com/2019/07/28/sunday-talks-mick-mulvaney-vs-chris-wallace-4/
VIDEO:   https://www.youtube.com/watch?v=2lMGpvQLLcc
.
Remember Mini AOC? She’s
Back with 2 Absolutely Hilarious Videos 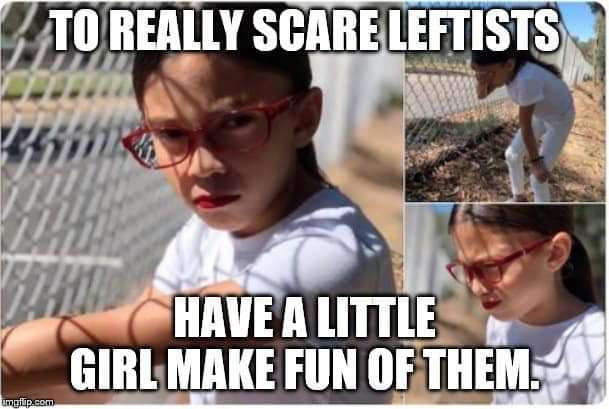 By ANDREW J. SCIASCIA
{ westernjournal.com } ~ If you happen to be a politically inclined Twitter user, it’s more than likely your feed has been graced in recent months by videos of a young Latina... with bold red lipstick and glasses too big for her face making foolish statements about the benefits of socialism. If you happen to be a conservative, the chances are those videos have brought you some serious joy. Now, you’re probably about to ask, “What joy could I possibly derive from viewing the endless stream of political and economic ignorance spewed by Democratic Rep. commie-Alexandria Ocasio-Cortez?” But before you ask, we aren’t talking about the unbearable freshman congresswoman from Queens, New York. We’re talking about her pint-sized impersonator, Ava Martinez — better known as “Mini AOC.” Martinez was becoming a viral sensation earlier this summer, massing thousands of followers with her spot-on impression of commie-Ocasio-Cortez. Unfortunately, all that was cut short when some on the left started making death threats to the grade-school child and her mother, who often worked the camera for the social media personality’s adorable and heartwarming videos. Understanding the real threat of the modern progressive mob, Ava’s mother pulled the account from the internet in early July. But luckily for adoring fans, and anyone with a sense of humor, Ava and her mother have decided to release a reel of bloopers and outtakes from Mini AOC’s hilarious hits. Apparently, the pair missed making the videos and felt it was necessary to cut through America’s “awkward” politics and help the internet “lighten up.”...  https://www.westernjournal.com/ct/video-remember-mini-aoc-back-2-absolutely-hilarious-videos/?utm_source=Email&utm_medium=conservativevideos&utm_campaign=weeklyam&utm_content=libertyalliance
VIDEOS:  https://twitter.com/sickentirade/status/1153405068038696961?ref_src=twsrc%5Etfw%7Ctwcamp%5Etweetembed%7Ctwterm%5E1153405068038696961&ref_url=https%3A%2F%2Fwww.westernjournal.com%2Fct%2Fvideo-remember-mini-aoc-back-2-absolutely-hilarious-videos%2F
.
Equifax breach settlement sparks criticism

By EMILY BIRNBAUM and MAGGIE MILLER
{ thehill.com } ~ Lawmakers and industry officials are criticizing the settlement between regulators and credit agency Equifax... claiming the potentially $700 million penalty is not enough for the 2017 data breach that exposed the personal information of around 147 million Americans. Critics also are turning their ire toward Congress, arguing the penalty could have been steeper if the U.S. had a comprehensive privacy law in place. “The settlement shows that we need a comprehensive data privacy and security law to ensure companies are designing their systems to protect consumer privacy from the start, minimizing the personal information they keep, and are held appropriately accountable if they fail,” House Energy and Commerce Committee Chairman Frank Pallone Jr. (D-N.J.) said in a statement on Monday. The enormous Equifax breach, which left more than half the adults in the U.S. vulnerable to identity theft and fraud, compromised data including Social Security numbers, birth dates, driver’s license numbers, credit card numbers, addresses and some passport data. The settlement would require Equifax to pay $575 million and possibly $700 million, over the breach. Of that, $300 million will go to a fund providing impacted consumers with credit monitoring services. Equifax also stands to add $125 million if the initial amount doesn’t prove adequate to meet demand. Additionally, Equifax will pay $175 million to 48 states, the District of Columbia and Puerto Rico, along with $100 million to the Consumer Financial Protection Bureau in civil penalties. When the full amount is divided out, Equifax will pay around $4 for every consumer impacted by the breach...
https://thehill.com/policy/cybersecurity/454207-equifax-breach-settlement-sparks-criticism
.
Israel, US carry out successful of
Arrow-3 missile over Alaska 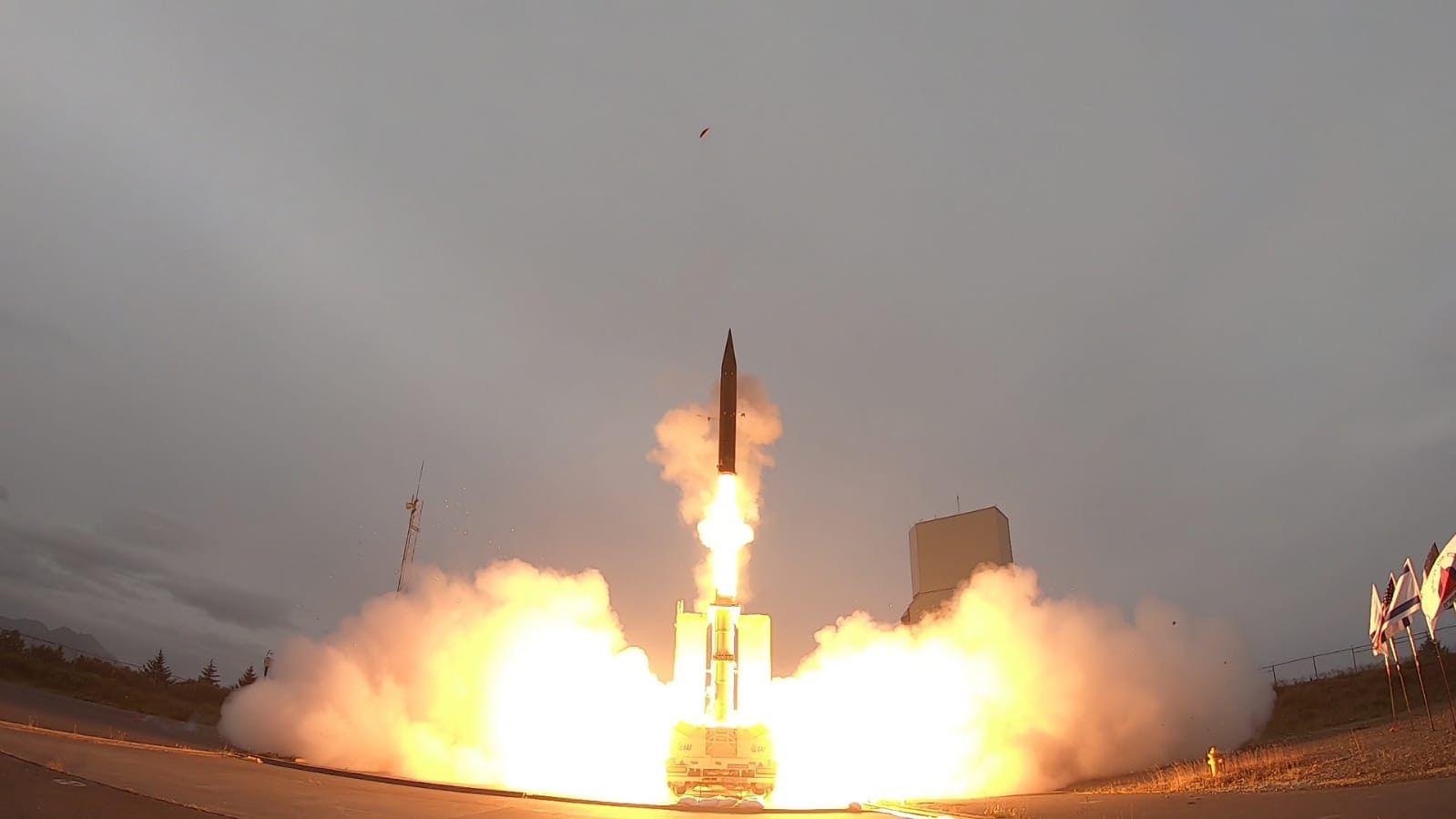 by ANNA AHRONHEIM
{ jpost.com } ~ In face of Iran's continued development of long-range missiles, Israel and the United States completed a series of tests of the new long-range Arrow-3 ballistic missile defense system in Alaska... including the successful interception of an "enemy" target. The series of experiments over the course of 10 days saw three successful interceptions. It was the first time that such a test took place outside of Israeli territory and took place at Pacific Spaceport Complex-Alaska (PSCA) in Kodiak, Alaska.  In the exercise the system was tested against targets similar in behavior to advanced ballistic missiles being developed by Iran and future threats which Israel might face. Israel and the United States remain concerned that Iran has continued to work on both its nuclear program as well as its ballistic missile program despite international criticism. The series of experiments successfully demonstrated the missile’s capability against exo-atmospheric targets. An American  AN-TPY2 radar participated in the test and successfully demonstrated operational connectivity between the systems. “Ten challenging years of development have culminated in this moment: the Arrow 3 weapon system completed a test campaign, during which an Arrow 3 interceptor completed full interception of the target,”said Moshe Patel, the director of the Israel Missile Defense Organization. “In addition, the fact that the tests were conducted in Alaska, tens of thousands of kilometers away from Israel, is another significant achievement that demonstrates the operational capabilities of the Arrow 3 system to successfully face any threat,” he added...
https://www.jpost.com/Middle-East/Israel-US-carry-out-successful-test-of-Arrow-3-missile-over-Alaska-596979
.
Teaching Kids Violence and Hate In Chicago

by Jeff Dunetz
{ lidblog.com } ~ It’s reminiscent of the Hamas summer camps where little kids are taught to hate and slaughter Jews. But in this case, the young kids are taught to hate and beat ICE  not Jews and unlike the terrorist camps... they weren’t founded by UNICEF  A local chamber of commerce gathered 25 local businesses together to host an East Side of Chicago community day where kids took turns smashing a piñata designed to look like an ICE officer. When the kids weren’t beating ICE officer piñata, they got to throw balls at President Trump. Perhaps child activities that teach kids violence is one of the reasons there were almost 30K violent crimes in Chicago in 2017 per the FBI. Videos and photos of the scene showed the kids as they lined up for their turn to smash the ICE agent-themed pinata with a large stick. Many were encouraged by their parents, and some people even held their small children so they could help them to strike it. “The older kids, of course we let them know what it meant. We teach them what it meant,” Los Brown Berets Chicago chapter leader Anthony Martinez told WBBM.  Martinez said that his group ordered a Batman pinata, then modified it to resemble the appearance of a white ICE agent. Martinez also told the Chicago CBS affiliate that the activity was meant as a nuanced statement. “It was not meant in a negative way at all towards law enforcement.” Not intended as negative???  If you believe that, I have a bridge in Brooklyn to sell you...
https://lidblog.com/teaching-kids-hate-chicago/
.

.
worthless-Omar to America: 'You
Bunch of Racists'

Nate Jackson:  worthless-Ilhan Omar, the congresswoman from Minnesota, is one of the more bigoted members of the Democrat Party. And that’s saying something. Yet she took to the op-ed page of The New York Times Thursday to lecture the rest of us about race.

“It Is Not Enough to Condemn Trump’s Racism,” blares the headline, which is followed by the teaser, “The nation’s ideals are under attack, and it is up to all of us to defend them.” So what are those ideals? In a word, socialism. Of course, we’d expect nothing less from worthless-Omar and her fellow “Gang of Four” travelers. But what’s most appalling about her moral preening is how she’s throwing rocks from a glass house.

We’ve documented worthless-Omar’s bigotry plenty in the past, but it’s somewhat amusing that on the same day she published her Times screed, video of a 2018 interview surfaced in which she said this:

Actually, roughly half of the murders in America are perpetrated by black men — murdering other black men — despite the fact that the entire black population is just 13% of the whole. This violence largely takes place on Democrat-run urban poverty plantations. We suppose it’s “racist” to point out those inconvenient truths, however, because worthless-Omar and her ilk would rather spin a narrative of the deadly danger of supposedly surging white nationalism.

As for her op-ed, worthless-Omar first tells us her personal story of arriving as a refugee from Somalia (well, she left out the part about her own alleged marital fraud). But instead of telling how a poor foreign girl became an American citizen who went on to win a seat in Congress — what a great country! — she expresses her bitter disappointment in America: “The America we arrived in was different from the one my grandfather had hoped to find. The land of opportunity he imagined was in fact full of challenges.” In short, those challenges were rampant racism and bigotry, on top of the fact that she wasn’t handed everything just for being here. No one forced her to stay.

She then blames President Donald Trump and Republicans for what Democrats specialize in doing: “weaponizing division,” using “racist language” to “turn American against American,” and ensuring that “Americans are too busy fighting with one another” to address the nation’s real problems.

While decrying what is really her own party’s strategy, she then declares socialism to be the American ideal needing protection. Open borders, voting without ID, demolishing the economy to fight climate change, eradicating “soaring inequality” through raising the job-destroying federal minimum wage, and providing “affordable health care” via single-payer government control are just some of the socialist agenda items “ideals at the heart of our founding” she purports to defend.

worthless-Omar and her fellow socialist travelers are quickly becoming the face of the Democrat Party. They’re its ideological driving engine. So when one of them takes to the pages of one of America’s biggest newspapers to articulate their radical vision, take heed.  ~The Patriot Post