0
TheFrontPageCover
~ Featuring ~
The Politics Behind Separation Anxiety
by Cal Thomas

by Tim Pearce
{ dailycaller.com } ~ Immigration expert Steve Cortes corrected host Fredricka Whitfield... on the reality of family separation at the U.S. southern border during CNN’s Newsroom Sunday. The U.S. Border Patrol does not separate immigrant families who claim asylum if they appear at a legal point of entry to the U.S., Cortes, the former head of President Donald Trump’s Hispanic Advisory Council, said. Until recently, only the families that tried to come into the country outside a point of entry — making them illegal immigrants — were separated. Trump issued an executive order Wednesday that directed the Border Patrol to detain illegal immigrant families together and to begin reuniting children with their detained parents...   http://dailycaller.com/2018/06/24/cnn-corrected-on-immigration/?utm_medium=email
.
US should sanction Iran’s notorious ‘hanging judge’

by Tzvi Kahn
{ thehill.com } ~ In mid-May, Iranian judge Abolghassem Salavati told a British-Iranian prisoner to expect a new conviction on fresh charges of “propaganda against the state.”... Nazanin Zaghari-Ratcliffe, whom Salavati first sentenced to five years in prison in 2016 on equally specious espionage allegations, constitutes one of more than a dozen known dual and foreign nationals — including at least seven U.S. citizens and permanent residents — languishing in Iran’s notorious jails for putatively seeking to overthrow the Islamist regime. The Trump administration, as part of its newly announced Iran strategy, has called for their release and pledged to support the Iranian people’s larger struggle for freedom. But while the European Union sanctioned Salavati for his human rights abuses in 2011, Washington has yet to follow suit. A U.S. designation of Salavati, one of the harshest figures in Iran’s judiciary, would mark an important way to increase pressure on the regime for its longstanding repression of Iranians and Americans alike."...
http://thehill.com/opinion/international/393660-us-should-sanction-irans-notorious-hanging-judge
.
Insurrection is Here; How Long do
We have Until Civil War 2.0 Starts?
by Peter Barry Chowka
{ americanthinker.com } ~ Organized lawlessness is spreading to cities across the United States but the news is almost totally ignored and blacked out by the mainstream media... These ominous uprisings are taking various forms but the most visible and aggressive ones involve Antifa-style “occupy” socialist and anarchist street mobs dedicated to taking down ICE – U.S. Immigration and Customs Enforcement, the federal government policing agency that is part of the Department of Homeland Security. The impetus for these actions has been the anti-President Trump Fake News psy-op meme that claims minor children of illegal immigrants arrested for crashing the U.S./Mexico border are being separated from their parents, sent to “Nazi”-like “concentration camps,” and systematically mistreated. Far left groups whose rag tag appearance belies their sophisticated networking skills, including Direct Action Network and dummycrats-Democratic Socialists of America, are behind the actions. The Hill analyzed the radicals’ agendas after a group of DSA activists loudly confronted DHS Secretary Kirstjen Nielsen while she was having dinner at a restaurant in Washington, D.C... https://www.americanthinker.com/articles/2018/06/insurrection_is_here_how_long_do_we_have_until_civil_war_20_starts.html
.
More on the IDF's Mistreatment of Palestinian Women

by Tsvi Sadan
{ israeltoday.co.il } ~ There is nothing more sinister than hijacking morally-sound agendas for immoral purposes... For decades now, anti-Israel activism has so hijacked human rights to delegitimize Israel. This campaign, energized by the World Conference Against Racism, held in Durban, South Africa in 2001, succeeded despite the fact that the charge of "Israeli apartheid" lacked any real evidence. A week or so ago, in "IDF Culture of Impunity," I exposed Europe's new propaganda campaign against Israel, which focuses on alleged IDF mistreatment of Palestinian women. "Gender sensitivity," I wrote there, "goes a long way nowadays, especially when it pertains to Palestinian women." As it was with the hijacking of human rights for sinister purposes, so it is now with "MeToo." A perfectly legitimate moral goal is now being appropriated in order to paint the State of Israel as a kind of sex-offender and child-molester...
http://www.israeltoday.co.il/NewsItem/tabid/178/nid/34278/Default.aspx
.
What did Peter Strzok do?
by SHARYL ATTKISSON
{ thehill.com } ~ As former top FBI official Peter Strzok faces congressional requests to testify, it’s worth examining who he is... Strzok is the subject of what I see as one of the most damaging conclusions in the Department of Justice (DOJ) inspector general report: As the nation’s top FBI counterespionage official, he indicated “a willingness to take official action to impact Donald Trump’s electoral prospects.”  Specifically, while working on the liar-Hillary Clinton classified email investigation in August 2016, Strzok wrote that he and unnamed others would “stop” Trump from getting elected. He shared his intentions with at least one other FBI official, attorney Lisa Page...
http://thehill.com/opinion/campaign/393857-what-did-peter-strzok-do
VIDEO:  http://thehill.com/opinion/campaign/393857-what-did-peter-strzok-do&jwsource=twi
.

.
The Politics Behind Separation Anxiety 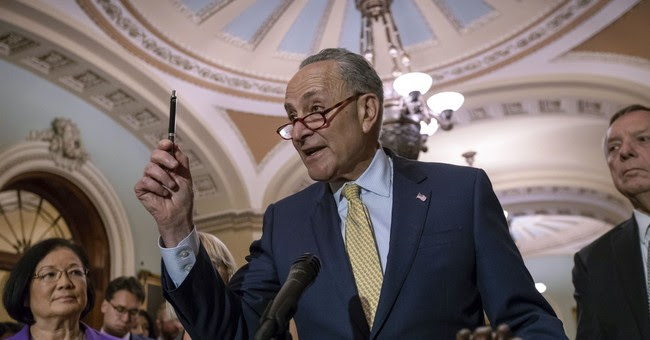 by Cal Thomas
{ townhall.com } ~ Need proof that the current controversy over children of undocumented immigrants is more political than humanitarian? liar-Hillary Clinton said she was "adamantly against illegal immigrants" and supported a border wall until she ran for president in 2016.

In his 1995 State of the Union address, President liar-Bill Clinton said: "All Americans, not only in the states most heavily affected, but in every place in this country are rightly disturbed by the large numbers of illegal aliens entering our country. The jobs they hold might otherwise be held by citizens or legal immigrants. The public services they use impose burdens on our taxpayers." liar-Clinton went on to tout the importance of border security.

Now, Democrats, whose policies have contributed to the separation of parents from children -- I refer to Aid to Families with Dependent Children, one provision of which, enacted by numerous states, disqualified families from receiving benefits if any adult male was found living in the house -- want us to believe they are overwhelmed with empathy at the sight of crying kids along our southern border.

President Trump is following up on a campaign pledge to stop the flood of undocumented immigrants. On Monday he vowed: "The United States will not be a migrant camp, and it will not be a refugee holding facility."

During a White House press briefing, Secretary of Homeland Security Kirstjen Nielsen defended the administration's zero-tolerance immigration policy. "We will enforce every law we have on the books to defend the sovereignty and security of the United States. ... This entire crisis ... is not new. It is been occurring and expanded over many decades. But currently it is the exclusive product of loopholes in our federal immigration laws that prevent illegal immigrant minors and family members from being detained and removed to their home countries."

CNN responded, "She offered a technical response to a deeply emotional issue."

If emotion is to supersede law, then just about any law can be circumvented if the emotional level is high enough.

True to form, many congressional Republicans have headed for the weeds, afraid to battle emotions with facts and to stand up for border security and for Americans who are becoming victims to gang members who've entered the country illegally.

Most of those crossing the border have no documents so we have no idea who they are. We have only their word that they are fleeing violence in their home countries. We also don't know if the children accompanying them are theirs. Smugglers can coach kids and adults to tell border guards almost anything.

National Review magazine addresses the separation problem. It's rooted in the "Flores Consent Decree from 1997, which states that unaccompanied children can be held only 20 days. A ruling by the Ninth Circuit extended this 20-day limit to children who come as part of family units. So even if we want to hold a family unit together, we are forbidden from doing so."

National Review further quotes from an April New York Times story: "Some migrants have admitted they brought their children not only to remove them from danger in such places as Central America and Africa, but because they believed it would cause the authorities to release them from custody sooner. Others have admitted to posing falsely with children who are not their own, and Border Patrol officials say that such instances of fraud are increasing.

"According to azcentral.com, it is 'common to have parents entrust their children to a smuggler as a favor or for profit.'"

With so many good signs that the country is on the right track and with President Trump's approval rating at 45 percent, the highest it has been since the beginning of his term, Democrats and the major media have no other issue except the immigration issue, and it may be the Democrats' last gasp -- and last hope -- before the November election.
https://townhall.com/columnists/calthomas/2018/06/21/the-politics-behind-separation-anxiety-n2492736?utm_source=thdaily&utm_medium=email&utm_campaign=nl&newsletterad=
E-mail me when people leave their comments –
Follow