by Houston Keene
{ ijr.com } ~ Senator Rand Paul (R-Ky.) went after House Intelligence Committee Chairman scumbag-Adam Schiff (D-Calif.), blasting him as a “hypocrite”... for targeting President  Donald Trump for his use of executive privilege when he was perfectly fine with former President Barack scumbag/liar-Obama’s use of the power. While giving an interview on ABC’s “This Week,” Paul — the junior senator from Kentucky who sits on the Senate Committee on Homeland Security and Government Affairs — torched scumbag-Schiff as a “hypocrite” for his criticism of Trump’s use of “executive privilege” after he was “all for” scumbag/liar-nObama using it. Paul continued on to bring up the cost of Special Counsel dirty cop-Robert Mueller’s investigation into Russian meddling in the 2016 presidential election and “investigating the president.” “The bottom line is we spent $35 million investigating the president,” said Paul. “Their conclusion was there was no underlying crime.” “This whole kibitzing about ‘oh, well, maybe he obstructed justice’ to try to hide an investigation about something he didn’t do,” added Paul. “This is absurd, and the American people know it.” Paul then continued on to state that the investigation was “politically motivated from the very beginning” and started by former U.K. intelligence agent Christopher Steele’s now-discredited dossier. “That should be investigated because we cannot allow the incumbent parties to weaponize the intelligence communities to spy on Americans, or on their political candidates, or potentially their donors,” Paul went on to say. “So there is a real danger to this — and it’s a constitutional one — but the Democrats have it completely upside-down.”...   https://ijr.com/rand-paul-schiff-executive-privilege/?utm_source=hs_email&utm_medium=email&utm_content=72587959&_hsenc=p2ANqtz-9kdBZMqLvBuDcZr7HIdaE_qpYLwKg3Wh-JYoFnbWGB3SzoKyNTrNhUAo9HYtmH8ZtRKwaMqYMSlQtqdDmPkNd7PGEydg&_hsmi=72587959
.
Trump says Barr will decide if
dirty cop-Mueller testifies before Congress

by Louis Casiano
{ foxnews.com } ~ Attorney General William Barr will have the final say on whether Special Counsel dirty cop-Robert Mueller will testify before Congress... about his report on the Russia investigation, President Trump said Thursday. “I’m going to leave that up to our very great attorney general,” Trump told reporters, according to Roll Call. “He’ll make a decision on that.” Barr -- who has said he doesn't object to dirty cop-Mueller testifying -- has authority to block dirty cop-Mueller from appearing before Congress because the special counsel is a Justice Department employee. Congressional Democrats have pushed for Barr to release the unredacted version of dirty cop-Mueller's 400-page report, to no avail. House Speaker Nancy Pulosi, D-Calif., and House Judiciary Committee Chairman scumbag liar-Jerrold Nadler, D-N.Y., have said the actions of Trump and Barr amount to a "constitutional crisis." “President Trump has taken a series of actions over his two years as president where he has genuinely pushed the boundaries, across a whole range of things: criticizing sitting federal court judges, the way he talks about the media, and now the way that he is challenging the power of Congress,” Senate Judiciary Committee Chris Coons, D-Del., said Wednesday...
https://www.foxnews.com/politics/trump-says-barr-will-decide-if-mueller-testifies-before-congress
.
Larry Kudlow -vs- Chris Wallace on China…

by sundance
{ theconservativetreehouse.com } ~ National Economic Council Chairman Larry Kudlow appears on Fox News to debate Chris Wallace over the U.S-China trade reset... As customary Wallace completely ignores the dynamic of communist China as a state run economy, and not a free market system; thus presenting the fictitious Wall Street position about bad tariffs. Chairman Kudlow notes the bigger issues of President Trump confronting the enforcement mechanisms that must be in place if a trade agreement (FTA) between a free-market system (USA) and a state-run system (China) are going to work…U.S. Trade Representative Robert Lighthizer today released the following statement regarding additional action under Section 301 of the Trade Act of 1974: “Earlier today, at the direction of the President, the United States increased the level of tariffs from 10 percent to 25 percent on approximately $200 billion worth of Chinese imports. The President also ordered us to begin the process of raising tariffs on essentially all remaining imports from China, which are valued at approximately $300 billion.” The process for public notice and comment will be published shortly in the Federal Register. The details will be on the USTR website on Monday as we begin the process prior to a final decision on these tariffs.
https://theconservativetreehouse.com/2019/05/12/sunday-talks-larry-kudlow-vs-chris-wallace-on-china/
VIDEO:  https://www.youtube.com/watch?v=5C9PG8KwXwE
.
Lindsey Graham Requests Interview with State Dept.’s Kathleen Kevalac Who Flagged Junk
Steele Report 10 Days Before FISA
Warrant Request 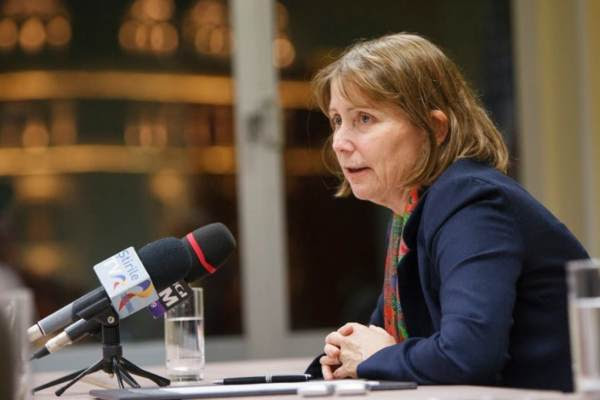 by Jim Hoft
{thegatewaypundit.com} ~ On Thursday award-winning investigative journalist John Solomon obtained memos from a high-ranking government official, Deputy Assistant Secretary of State Kathleen Kavalec... who met with former British spy Christopher Steele in October of 2016 and determined that Steele’s ‘dirt’ on Trump was inaccurate and likely leaked to the media. Kavalec flagged this in memos and handwritten notes just 10 days before the first FISA warrant on Trump campaign advisor Carter Page was granted. The FBI and State Department knew Steele’s documents were fraudulent before they used these same documents to obtain FISA Court permission to spy on Carter Page and the Trump campaign. Senate Judiciary Committee Chairman Lindsey Graham (R-South Carolina) today sent letters to Secretary of State Mike Pompeo and Department of Justice (DOJ) Inspector General Michael Horowitz regarding communications between a State Department official and Christopher Steele, who compiled the dossier used to obtain Foreign Intelligence Surveillance Act (FISA) warrants to surveil Trump campaign officials. It was recently revealed through a Freedom of Information Act request that Steele met with then-State Department official Kathleen Kavalec ten days prior to the issuance of the initial Carter Page FISA warrant and told her that he was “keen to see this information the dossier come to light prior to November 8,” the date of the 2016 presidential election. “This important information further demonstrates the bias of the primary source of material that was the basis for the Carter Page FISA warrant,” Graham wrote...
https://www.thegatewaypundit.com/2019/05/breaking-lindsey-graham-requests-interview-with-state-dept-official-kathleen-kevalac-who-flagged-junk-steele-report-10-days-before-fisa-warrant-request/
.
Fugees rapper to be charged in
scumbag/liar-nObama super PAC fraud scheme
by Jonathan Easley
{thehill.com} ~ Federal prosecutors will bring charges on Friday against Pras Michel, a rapper for the hip-hop group The Fugees, for campaign finance violations... pertaining to donations to a super PAC that supported former President scumbag/liar-nObama’s reelection campaign. Bloomberg reported Friday that the Justice Department will accuse Michel of funneling money to the pro-scumbag/liar-nObama groups without disclosing the foreign origins of the money, which is said to be tied to Jho Low, a Malaysian businessman. Low’s whereabouts are unknown. He is hiding from Malaysian and U.S. authorities, who are investigating allegations he bilked the country out of hundreds of millions of dollars by defrauding the government-run fund 1Malaysia Development Berhad (1MDB). 1MDB was established to promote economic development in Malaysia, but U.S. prosecutors say Low used it as a personal slush fund to influence government officials. The Justice Department is also investigating Goldman Sachs, which raised billions of dollars for the fund. One Goldman banker has pleaded guilty to bribery and money laundering charges, and a second is expected to be extradited from Malaysia to the U.S., where he will face similar charges, Bloomberg reported.
https://thehill.com/homenews/campaign/443089-fugees-rapper-to-be-charged-in-obama-super-pac-fraud-scheme-report
.
.

.
Socialists Come for Your Credit Cards

Nate Jackson:  Americans collectively carry more than $1 trillion in credit card debt and $4 trillion in total consumer debt. Most folks don’t pay off their cards each month, and credit card companies charge very high interest rates on that debt, which disproportionately hurts poor and younger Americans. Last year alone, credit card companies raked in $113 billion in interest and fees, a 35% increase from 2012. It’s a massive issue affecting millions of people who would benefit from good financial counseling and planning. But, as usual, the leftist solution is worse than the problem, even if it does — like Democrat offers on college tuition and student loans — have populist appeal across party lines.

Socialists commie-Bernie Sanders and commie-Alexandria Ocasio-Cortez have teamed up to introduce the Loan Shark Prevention Act. The legislation would limit credit card interest rates to 15% — significantly lower than the “extortion-level interest rates” commie-Ocasio-Cortez says companies now charge. According to The Washington Post, “For borrowers with high credit scores, the average rate was 17.73 percent last week. … For those with poor credit scores, the average is now about 24.99 percent.” The median interest rate is currently 21.36%.

Those rates have climbed precipitously in recent years. In part, that’s for good reason. People with lower credit scores have a poor track record repaying debt. And the financial crisis of 2008 was driven by banks taking undue risks (mandated by Democrat law) on borrowers with bad credit. Hedging against that is a basic business decision, and the result of the legislation to “fix” the problem is that fewer poor people will be able to get credit cards. It’s reminiscent of Barack scumbag/liar-nObama’s regulations on payday lenders. Those lenders are distasteful but sometimes necessary options, and enlightened bureaucrats in Washington aren’t going to improve anything.

Speaking of payday lenders, the commie-Sanders/commie-AOC legislation aims to create an alternative “not-for-profit public option for basic banking services” via … the U.S. Postal Service. Yes, the same U.S. Postal Service that has lost $69 billion since 2007. As Hot Air’s Ed Morrissey quips, “The idea that the US Postal Service is a good model for any kind of ‘public option, let alone banking, is an absolute riot.” But commie-Sanders and comie-AOC are totally serious.

By introducing regulation and eliminating options, argues Reason’s Peter Suderman, “What commie-Sanders is actually bragging about is eliminating choices — choices that may seem unfortunate or unpleasant to the sort of people who, say, own three homes and write bestsellers that make them millionaires — but which often benefit the people who make those choices: lower-income people with less stable finances. In essence, commie-Sanders is proud of having eliminated useful financial tools for the poor.” Nonetheless, it will win him and the Democrat Party votes, so they’ll keep doing it.  ~The Patriot Post