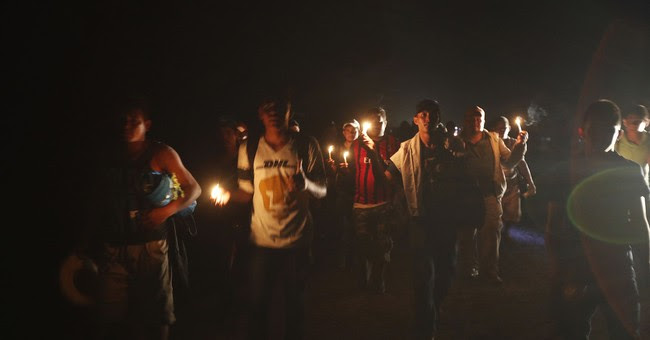 .
dirty cop-Mueller has 'heavy burden' to prove
Russia's intent to defraud in 2016 election 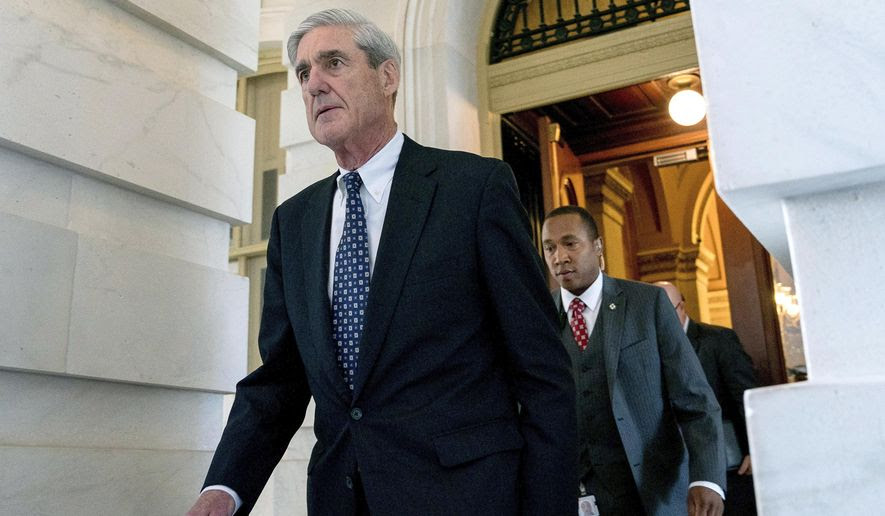 by Rowan Scarborough
{washingtontimes.com} ~ Special counsel dirty cop-Robert Mueller is churning in uncharted legal waters as he tries to nail a Russian firm... for bankrolling Moscow’s deceptive social media invasion into the 2016 election. It is not only Concord Management and Consulting LLC’s attorney saying this. Defense attorney Eric Dubelier said in court that Mr. dirty cop-Mueller created a “make-believe crime” and that the “real Justice Department” would never have brought such an indictment. U.S. District Judge Dabney L. Friedrich also is expressing doubts about Mr. dirty cop-Mueller’s unique prosecutorial adventure, though she is not saying she will dismiss the charges, as Mr. Dubelier has requested. A review of the transcript of an Oct. 15 hearing shows the judge’s reservations. She said of Mr. dirty cop-Mueller’s team, “They’ve got a heavy burden at trial to prove that knowledge.” She was referring to awareness that Concord knowingly defrauded the Federal Election Commission, the Justice Department and the State Department...
https://www.washingtontimes.com/news/2018/oct/28/robert-muellers-russia-case-difficult-prosecute/?utm_source=Boomtrain&utm_medium=manual&utm_campaign=20180326&utm_term=newsalert&utm_content=newsalert&bt_ee=80OEgHAN%2FLe6l7PQ3XsUBKVRvOsFxw1jbi4JUpCH0MARI8DsCb9FdluVGaZHlZ0u&bt_ts=1540765396926
.
The Left Goes Full Open Borders 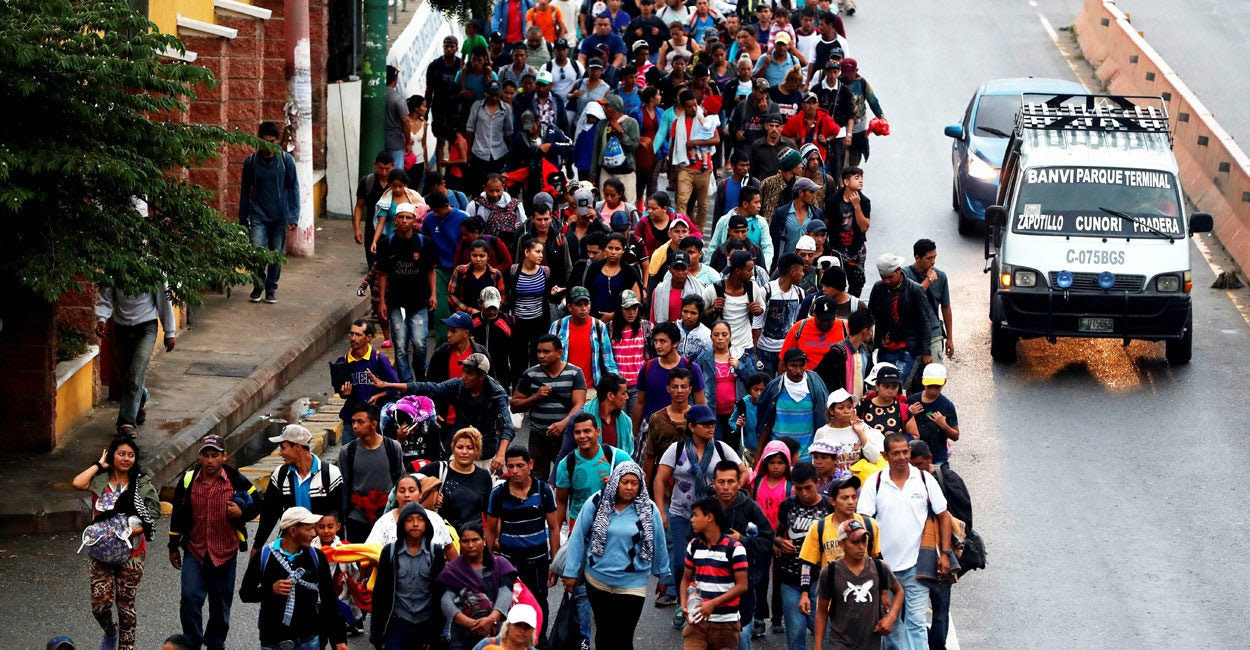 by Jarrett Stepman
{dailysignal.com} ~ It wasn’t long ago that both sides of the aisle believed America’s border laws should be enforced... As President Donald Trump pointed out on Twitter, even former President Barack scumbag/liar-nObama, at least rhetorically, said that illegal immigrants couldn’t be let into the country en masse and without restrictions. He said that as a senator. “We simply cannot allow people to pour into the United States undetected, undocumented, unchecked and circumventing the line of people who are waiting patiently, diligently, and lawfully to become immigrants into this country,”  scumbag/liar-nObama said. This dynamic has dramatically shifted, as the American left now increasingly sees any level of border enforcement as beyond the pale. The migrant caravans originating in Honduras and heading north to the U.S. border are testing just how far the left will go in embracing this new narrative. The position scumbag/liar-nObama held just over a decade ago is now considered offensive in some circles. Some are even demanding that the U.S. let the caravan into the United States... But forget about the people who been waiting to enter legally.  https://www.dailysignal.com/2018/10/26/the-left-goes-full-open-borders/?mkt_tok=eyJpIjoiTkdRd01HVTFNbVk0TVdReCIsInQiOiJTS0o2MjBub3lsSmN6UUdkY2JcL0llWDFwQU8xalNIbVE4SURrcGI0VUNVVmkxRFJWcW1RdXlJRE82cGFIYkVDOFVIZ0hmN25kbm9YZ3dxcytPNWhWRXBVS2lObmF5Yllnd09DK09Kd2drTVNQM1hVbUNRUWR6NXNLRERtdTJ6aTcifQ%3D%3D
.
dummycrats-Democrats Using Cloward-Piven
as their Midterm Hail Mary Pass

by Brian Joondeph
{americanthinker.com} ~ Cloward-Piven is a political strategy first described in 1966, by two Columbia University sociologists, Richard Cloward and Frances Fox Piven... This was published appropriately in the far-left The Nation, the oldest continuously published news magazine in the country. Cloward-Piven’s goal was the creation of, “A political crisis would result that could lead to legislation for a guaranteed annual income and thus an end to poverty.” The objective was chaos and turmoil, or in their words, “A massive drive to recruit the poor onto the welfare rolls.” This would be followed by, “A federal program of income redistribution has become necessary to elevate the poor en masse from poverty.” The strategy uses community organizers to mobilize welfare recipients. Then, “As the crisis develops, it will be important to use the mass media to inform the broader liberal community about the inefficiencies and injustices of welfare.” It’s more effective when a community organizer is the leader of the country for eight years assisted with a compliant and nonobjective national media. Or as Rahm Emanuel said, “You never want a serious crisis to go to waste.” By crisis, Cloward and Piven mean, “A publicly visible disruption in some institutional sphere.” How do they create such a crisis? “Crisis can occur spontaneously e.g., riots or as the intended result of tactics of demonstration and protest which either generate institutional disruption or bring unrecognized disruption to public attention.”...
https://www.americanthinker.com/articles/2018/10/democrats_using_clowardpiven_as_their_hail_mary_pass.html
.
European Human Rights Court Backs Sharia Blasphemy Law 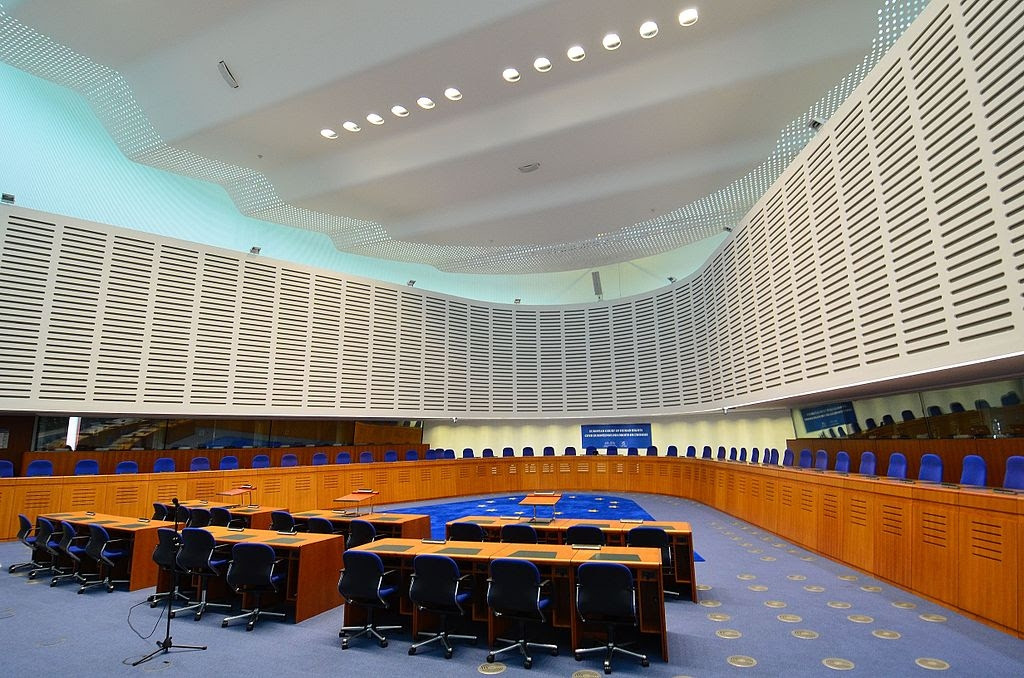 by Soeren Kern
{gatestoneinstitute.org} ~ The European Court of Human Rights (ECHR) has ruled that criticism of Mohammed, the founder of Islam, constitutes incitement to hatred and therefore is not protected free speech... With its unprecedented decision, the Strasbourg-based court — which has jurisdiction over 47 European countries, and whose rulings are legally binding on all 28 member states of the European Union — has effectively legitimized an Islamic blasphemy code in the interests of "preserving religious peace" in Europe. The case involves Elisabeth Sabaditsch-Wolff, an Austrian woman who in 2011 was convicted of "denigrating religious beliefs" after giving a series of lectures about the dangers of fundamentalist Islam. Sabaditsch-Wolff's legal problems began in November 2009, when she presented a three-part seminar about Islam to the Freedom Education Institute, a political academy linked to the Austrian Freedom Party — which today forms part of the Austrian government. A left-leaning weekly magazine, News, planted a journalist in the audience to secretly record the lectures. Lawyers for the publication then handed the transcripts over to the Viennese public prosecutor's office as evidence of hate speech against Islam, according to Section 283 of the Austrian Criminal Code (Strafgesetzbuch, StGB)...Austrian you  made a mistake, it was not a hate speech it was facts on Islam.
https://www.gatestoneinstitute.org/13204/european-court-human-rights-sharia
.
The dummjycrats-Democrats Embrace Anti-Semitism

by Daniel John Sobieski
{americanthinker.com} ~ Liberals, dummycrats-Democrats, and the legacy media are forever prattling about how the “toxic rhetoric” of President Trump before and after his election has inspired a culture of violence... expressed most recently in their view in the flurry of packages sent to leading dummycrats-Democrats containing amateur-night explosive devices some of which could only explode if you used a real explosive to set them off. Words do have consequences and can inspire the unhinged, but nowhere in Trump’s rhetoric are urgings to build and deliver explosive devices to your political opponents, not even those who urge their followers to “get in the face” of Republicans in their congressional offices or favorite eateries. Despite their constant references to David Duke in an attempt to paint Trump as racist, Trump did not seek any political endorsement from the likes of Duke and repudiated it when it came. His record of black empowerment in terms of rising employment, home ownership, and small business formation, reflected in rising black support in the polls, belies the racism accusations.  Following the dummycrats-Democrat’s own reasoning, one can credibly say by embracing noted anti-Semites Louis Farrakhan and scumbag-Al Sharpton  dummycrats-Democrats have been enablers of the deadly anti-Semitic hate most recently seen in the horrific massacre at a synagogue in Pittsburgh...  https://www.americanthinker.com/articles/2018/10/the_democrats_embrace_antisemitism.html
.

.
Invasion of the Country Snatchers

{townhall.com} ~ Is it more than coincidence that thousands of migrants from Central America are seeking to enter the United States illegally just two weeks before the midterm election? Who are these people? Who's paying for their transportation, food and expenses? Why doesn't the media find out? Is this migrant caravan a ploy by dummycrats-Democrats to win sympathy from Hispanic voters so they'll reverse their growing approval of Trump administration policies and vote against their interests?
One definition of invasion seems to fit what is transpiring at the southern border: "The entrance or advent of anything troublesome or harmful."

President Trump's immediate response to the migrant march toward our border was to threaten to reduce, or cut off aid to Honduras, Guatemala and El Salvador if those countries do not do more to stem the human tide. That approach might work temporarily, but there remains a greater problem only Congress can solve.

Border Patrol agents are catching a higher percentage of those who try to cross the border illegally, according to a Department of Homeland Security report. But "nearly one out of every 10 illegal immigrants crossing the southwest border," the Washington Times wrote in 2016, "is now demanding asylum." Because of laws Congress refuses to strengthen, most undocumented immigrants allowed to stay in the U.S. until their cases are adjudicated, but nearly all of them, the CPB reports, fail to show up at a removal hearing before a federal judge.

It hasn't taken long for word to get to those who want to get free stuff from America that if they can just set foot on U.S. soil and are from countries other than Mexico, with which we have a repatriation agreement, they are likely to remain here.

Congressional dummycrats-Democrats are apparently fine with catch-and-release policies because they see the likely electoral benefits. According to Customs and Border Protection (CPB), of the 94,285 Central American family units apprehended last year, 99 percent of them remain in the country today. CPB also reports that 98 percent of the 31,754 unaccompanied minors from the Northern Triangle of Central America remain in the country.
It was Sen. Dianne Fein-stein (D-CA) who backed the Trafficking Victims Protection Reauthorization Act that prevents the speedy return of unaccompanied minors from non-contiguous countries. The scumbag/liar-Clinton-era Flores Settlement Agreement further hinders the government's ability to detain and remove alien family units.

No country can maintain its character and purpose if it has what amounts to open borders. A common language is lost, there are fewer incentives to assimilate and immigrants can bring with them their own agendas and objectives. The hyphenating of various ethnic groups is proof enough that they seem to be less willing to be called simply Americans.

Liberal advocates of open borders accuse those who call for legal and orderly immigration and assimilation of being racists who are fearful of losing the country's European heritage. Perhaps there are some who feel that way, but I would think most want to maintain the character and culture of a nation for which their parents and grandparents fought, and in some cases died, to preserve.

Yes, the United States has a long history of racism, a history that plagues us still today, dividing us at a time when unity and common purpose are most needed. But if people hostile to us -- say Russians, communists from China, religious extremists from the Middle East -- were attempting to cross our border in large numbers, would most people be alarmed? Shouldn't they be?

Illegal immigration should be a top campaign issue, as it was in 2016, when President Trump promised to build a wall to protect our southern border. If Republicans maintain their congressional majorities, as seems increasingly likely, they should hurry to fund the wall and pass legislation to make it easier to deport those who break our laws.
https://townhall.com/columnists/calthomas/2018/10/25/invasion-of-the-country-snatchers-n2531507?utm_source=thdaily&utm_medium=email&utm_campaign=nl&newsletterad=&bcid=7220442bc3498cb5e2d68f3cb4d11680&recip=18305623
E-mail me when people leave their comments –
Follow