0
TheFrontPageCover
~ Featuring ~
Do rules not apply to Beltway elites?
by ERIK RUSH

by rickwells.us
{ rickwells.us } ~ Attorney Alan Dershowitz explained why he believes the Trump-Cohen tape couldn’t contain evidence of a crime... on Saturday night’s “Justice With Judge Jeanine.” When the subject of the Trump-Cohen tape came up, the Harvard professor focused on whether or not, as Trump attorney Rudy Giuliani claimed earlier, the tape was “played around” with, stating that the tape should be “subjected to forensic analysis” to find out what exactly was said. “We must stretch the words to find what out exactly what the president said, what the context was, and most of important why it ended at a particular point,” said Dershowitz. “Was that a decision made by Mr. Cohen to end it there? Was it erased because he said things that were exculpatory? We need to know the entire context of the tape if the tape means anything.” Dershowitz then explained the reasoning behind why he believes the tape couldn’t contain evidence of any crime...
https://rickwells.us/dershowitz-trump-cohen-tape/
VIDEO:  https://www.youtube.com/watch?v=HFGtH3tLNlk
.
Rudy Giuliani -vs- Margaret Brennan –
Feds Have 183 Recordings of Michael Cohen 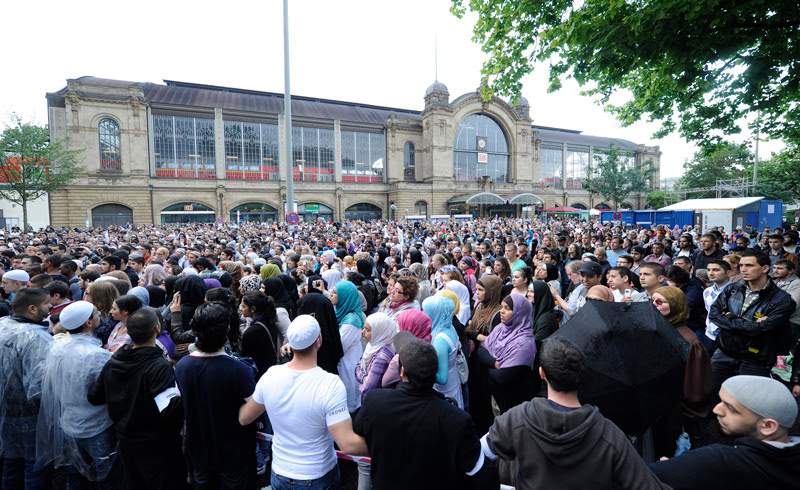 by Soeren Kern
{ gatestoneinstitute.org } ~ The number of Salafists in Germany has doubled over the last five years and now exceeds 10,000 for the first time... according to Germany's BfV domestic intelligence agency. BfV estimates that Germany is home to more than 25,000 Islamists, nearly 2,000 of whom pose an immediate threat of attack. The new figures are included the latest annual report of the Federal Office for the Protection of the Constitution (Bundesamt für Verfassungsschutz, BfV), and presented by Interior Minister Horst Seehofer and BfV President Hans-Georg Maaßen in Berlin on July 24. The report, considered the most important indicator of internal security in Germany, draws a bleak picture. The BfV estimates that the number of Islamists in Germany increased to at least 25,810 by the end of 2017, up from 24,425 in 2016. Strangely, the report does not provide any estimates for the number of followers of the Islamic State or al-Qaeda living in Germany. As a result, the actual number of Islamists in Germany is undoubtedly higher than 25,810...
https://www.gatestoneinstitute.org/12773/germany-salafists
.
Israeli Navy intercepts Gaza 'Freedom Flotilla' 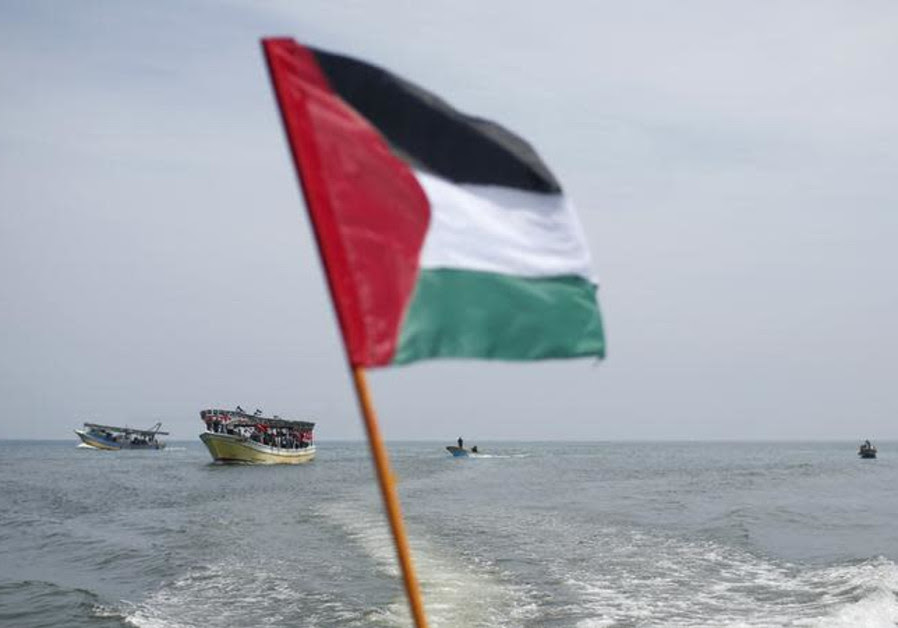 by ANNA AHRONHEIM
{ jpost.com } ~ The Israel Navy intercepted the flotilla boat Al Awda on Sunday after it disobeyed commands to stop sailing toward the Gaza Strip... “The Freedom Flotilla Coalition calls on the Norwegian Government, the national governments of those aboard Al Awda and the Freedom Flotilla, other national governments, and relevant international organizations to act immediately,” said Torstein Dahle of Ship to Gaza Norway, part of the Freedom Flotilla Coalition. “The international community must assume its responsibilities and demand that Israeli authorities ensure the safety of those on board, the speedy delivery of our gifts to the Palestinian people in Gaza, an end to the illegal blockade of Gaza,  and to stop impeding our legal right of innocent passage to Gaza to deliver our gift of much-needed medical supplies.” The boat, carrying aid and €13,000 worth of medical supplies, was expected to reach Gaza Sunday evening but, according to activists, the Israel Navy intercepted Al Awda “The Return” less than 60 nautical miles from the blockaded coastal enclave. The former fishing boat was sailing under a Norwegian flag and took off from Italy with 22 activists on board, including Israeli activist Yonatan Shapira who is on his fourth attempt to break the blockade from the sea...
https://www.jpost.com/Arab-Israeli-Conflict/Israeli-Navy-intercepts-Gaza-Freedom-Flotilla-563694?utm_source=newsletter&utm_campaign=29-7-2018&utm_content=israeli-navy-intercepts-gaza-freedom-flotilla-563694
.
New Asylum Rules Approved By GOP & dummycrats-Dems
Would Give Right To Migrate To US To Population
At Least Half The Size Of American Midwest

by PAMELA GELLER
{ freedomoutpost.com } ~ Here is yet more reason why President Trump is right: we need a border wall. The border is, aside from everything else, a national security issue... Flooding the U.S. with massive populations from Guatemala, Honduras and El Salvador will mean bringing in an inevitable number of gang members, and that will mean more crime and more needful deaths in the U.S. The United States does not have any obligation to take in anyone who is having difficulties from anywhere in the world. These insane asylum rules must be stopped immediately. “Asylum Rules Would Allow Migrating Foreign Populations to Fill Half of Midwest,” by John Binder, Breitbart, July 26, 2018. New asylum rules approved by the GOP majority and dummycrats-Democrat minority House Appropriations Committee would give the right to migrate to the United States to a foreign population at least half the size of the American Midwest. Two asylum rules pushed by Rep. David Price (D-NC) as well as Rep. Kevin Yoder (R-KS) and approved by the GOP-majority House Appropriations Committee would allow foreign nationals seeking refuge in the U.S. to migrate based on claims that they are fleeing domestic abuse or gang violence...
https://freedomoutpost.com/new-asylum-rules-approved-by-gop-dems-would-give-right-to-migrate-to-us-to-population-at-least-half-the-size-of-american-midwest/
.

Do rules not apply to Beltway elites?
by ERIK RUSH
{ wnd.com } ~ In some denominations of Reformed Christianity, concepts such as predestination and election are among the core doctrines, Calvinism being among the most recognizable of these. In the Old Testament, the term “elect” is applied to the Israelites in reference to their status as the chosen people of God, but in branches of certain post-Reformation denominations, this term took on new meaning.

Some denominational and church doctrines have been watered-down over the centuries, but in 16th-century Calvinism, predestination and election were understood as meaning that the “elect” were individuals within the denomination who had been chosen predestined to go to heaven. Strangely enough, merely being a Calvinist did not guarantee that one was going to be a member of the elect. Only God knew the answer to that question, although being a Calvinist and assiduously adhering to the requisite doctrine was generally considered a good indicator that one was indeed among the elect.

One can see how this perception might lead to all manner of questionable behavior among those who considered themselves among the elect. Some unscrupulous Calvinists and those adhering to similar creeds came to believe that they could do no wrong; their actions could not be questioned nor scrutinized because God had already smiled upon them, and He wouldn’t have done that had they not been worthy.

As one may have surmised by now, this is precisely the sort of attitude evidenced by Washington Beltway elites, Deep-Staters and the shadowy power players who support and subsidize them. They are the unassailable and infallible elect, and their socialistic vision for America and the West, if not the entire globe is the way things were meant to be, because they said so.

It is an entirely self-serving proposition, but that is always the way with tyrants.

As we have become painfully aware in recent years, this vision transcends political parties; there are nearly as many dedicated progressives read socialists in influential positions in the Republican Party as the dummycrats-Democratic Party.

As reported by WND on July 22, former President Barack liar-nObama once again stated that he was from the nation of Kenya during a visit there last week. As we know, this was a point of great contention when he was president, giving rise to countless news pieces, commentaries, media discussions and even books since, according to the Constitution, only a natural born citizen may serve as president of the United States.

When he decided to run for president, liar-nObama abruptly switched gears, claiming that he had been born in Hawaii, despite having no proof of this whatsoever, and having previously capitalized on his Kenyan birth throughout his political and dubious publishing career. In April 2011, the White House posted what it advertised as an official copy of liar-nObama’s original Certificate of Live Birth or long-form birth certificate, certified by the Hawaii Department of Health.

This document was quickly determined to be a forgery by investigative agencies and even a few private citizens, and it was a very sloppy forgery. Some of the most damning physical evidence was first featured right here on WND.

The health official who verified the authenticity of the birth certificate died under extremely suspicious circumstances in a small plane crash in 2013. No action was ever taken on the birth certificate issue, however, nor did any of liar-nObama’s political opponents in the GOP ever push the point.

I’m not here to breathe new life into the birth certificate controversy, or the question of whether or not liar-nObama was eligible to hold the office of president. What I’d like to point out is yet another instance of cavalier and brazen elitism on the part of a member of the political class. Apparently, now that liar-nObama is no longer president, it doesn’t matter to him how many more people know that he was never eligible to hold the office than were aware of it in 2011.

Examples of political elites in America demonstrating that the rules do not apply to them are legion, even if one only takes the last few years into account – and it’s getting worse.

The aggregate of Barack liar-nObama’s actions while president and the failure of Republicans to act against the abject criminality of his administration gave rise to the revelation of the Deep State’s existence – and ultimately the candidacy of Donald Trump. That said, liar-nObama’s lack of concern for whether or not people come to believe he’s a native Kenyan is actually a milder example of this imperious arrogance. Political heavies who engage in serial sexual misconduct, advocate violence against their opponents and amass vast fortunes by proxy through loopholes for which they’ve legislated and sweetheart business deals for family members are far more troubling.

Like I’ve said before: As with the “Reagan Revolution” of the 1980s, it will matter little what political and economic strides President Trump makes if Beltway elites are allowed to carry on with this obscene status quo. We will fare even worse if they manage to hoodwink Americans into electing yet another establishment operative to the presidency in 2020 or 2024.
https://www.wnd.com/2018/07/do-rules-not-apply-to-beltway-elites/
E-mail me when people leave their comments –
Follow