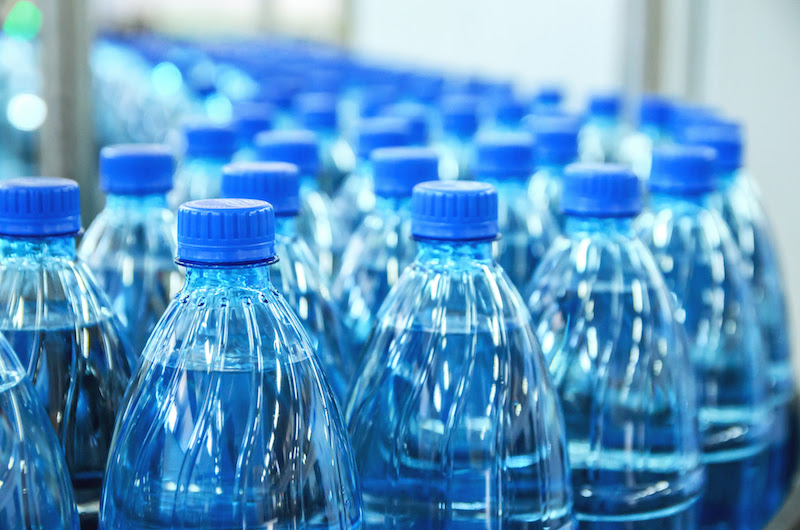 by Zachary Leeman
{bizpacreview.com} ~ California nonprofit Center for Environmental Health has revealed that water bottle brands Peñafiel and Starkey contain levels of arsenic that are above the legal limit... Peñafiel is owned by Keurig Dr. Pepper and Starkey is owned by Whole Foods. Peñafiel is sold at Target, Walmart and other major retailers. Starkey is sold at Whole Foods locations.“Customers typically purchase bottled water at exorbitantly high costs with the assumption that it is safer and healthier to drink than tap water, unaware that they are ingesting an extremely toxic metal linked to birth defects and cancer,” Center for Environmental Health CEO Michael Green said in a public statement about the report. CEH announced that they have sent “legal notices” to the bottled water brands they exposed through their report.  “CEH has sent legal notices to these bottled water manufacturers and retailers because the amount of arsenic in the water is above the level requiring a health warning under California’s consumer protection law Proposition 65,” their press release states. “Prop 65 identifies arsenic as a metal that causes reproductive harm and cancer.”...
https://www.bizpacreview.com/2019/06/22/illegally-high-levels-of-arsenic-found-in-water-bottle-brands-sold-at-walmart-target-and-whole-foods-767772?utm_source=Newsletter&utm_medium=BPR%20Email&utm_campaign=DMS
.
POTUS Gets Rare Praise for Iran Handling
From Frequent Critic scumbag/commie-
John Brennan: ‘I Do Applaud’ Him

by Sydney Monduy
{ ijr.com } ~ Former CIA Director scumbag/commie-John Brennan gave President Donald Trump rare praise for his handling of the rising tensions with Iran... during an interview on MSNBC on Friday. scumbag/commie-Brennan commended Trump for avoiding an attack that would have harmed over a hundred people, claiming that it would have created more problems. He also pointed out that while he has been an outspoken critic of the president, he still thought that it was impressive that Trump stopped the attack. “And again, I give him credit, and I rarely do that, but I give him credit for being almost the adult in the room because of the war hawks like John Bolton and Mike Pompeo who are pushing toward this confrontation that is not in anyone’s interest, especially the United States,” scumbag/commie-Brennan said. As IJR Red previously noted, Trump tweeted out his explanation for stopping the attack, claiming he couldn’t justify the action. However, he claimed that there will be consequences on the country for shooting down the American drone. “I am in no hurry, our Military is rebuilt, new, and ready to go, by far the best in the world,” Trump wrote. “Sanctions are biting & more added last night. Iran can NEVER have Nuclear Weapons, not against the USA, and not against the WORLD!”
https://ijr.com/potus-praise-brennan/
.
As ICE Readies for Nationwide Raids, Chicago’s
New Mayor Throws a Major Wrench in the Works

by C. Douglas Golden
{westernjournal.com} ~ Meet the new boss in the Windy City; she’s the same as the old boss... As Immigration and Customs Enforcement prepares for a series of raids on illegal immigrants across the United States, Chicago Mayor Lori Lightfoot tweeted  that her city “will not cooperate with or facilitate any ICE enforcement actions” and that she had taken “concrete steps” to throw a wrench in the works, including ensuring the city’s police superintendent had terminated ICE’s access to the city’s immigration database. “We are all aware of the threat from President Trump regarding raids by ICE, and in response, Chicago has taken concrete steps to support our immigrant communities,” Mayor Lightfoot said Friday in what — if she was not a Democrat– would be described as a “tweetstorm.”“I have directed — and  Superintendent Eddie Johnson has confirmed — that CPD has terminated ICE’s access to CPD’s databases related to federal immigration enforcement activities,” she continued. “I have also personally spoken with ICE leadership in Chicago and voiced my strong objection to any such raids. Further, I reiterated that CPD will not cooperate with or facilitate any ICE enforcement actions.” Lightfoot said that “Chicago will always be a welcoming city and a champion for the rights of our immigrant and refugee communities” and directed anyone who was concerned to a link about the raids from the National Immigrant Justice Center. How “concrete” these “concrete steps” are — at least in terms of foiling the raids — is probably a matter of some debate. The 2,000 families reportedly being targeted in the weekend raids that will be conducted across 10 major cities including Baltimore, Chicago, Houston, Los Angeles and Miami and New York, are subject to deportation orders. Furthermore, given the sensitivity of the matter, one assumes that ICE wasn’t expecting these cities to be welcoming places for law enforcement. In fact, most of the mayors of these locales have made similar statements...These mayors are idiots who put their feeling before their citizens and the rule of law.  https://www.westernjournal.com/ct/ice-readies-nationwide-raids-chicagos-new-mayor-throws-major-wrench-works/?utm_source=Email&utm_medium=CTBreaking&utm_campaign=breaking&utm_content=conservative-tribune
.
Over 3 Decades After 11-Year-Old Girl’s
Murder, Suspect Finally Arrested

by Loren Eaton
{ westernjournal.com } ~In Philip K. Dick’s 1956 short story “Minority Report,” he imagines a future where psychic monitors prevent all crime by foreseeing it before it happens... The story shows more than a few downsides of such a fictional arrangement. But in days where we read about horrific crimes each and every day in the paper, erasing them before they appear has its appeal. Of course, we don’t have such magical powers, and police have instead resorted to patience, perseverance and the wonders of DNA testing. That’s how Connecticut police tracked down an alleged offender who  reportedly murdered a girl in 1986. According to People, Kathleen Flynn was only 11 years old when she disappeared. She was last seen alive on September 23, 1986. She had decided to walk home from her middle school through a wooded area. Kathleen had traveled the path on her own numerous times, so it didn’t raise any alarms. But when she failed to return home, a search ensued. Authorities eventually found her about 150 feet from said path. She’d been bound about her wrists, raped and strangled, and her body had been piled with leaves and a rock to conceal her location. The Washington Post reported that suspicion soon centered on a young man named Marc Karun. For one thing, he lived close to Kathleen’s school. When interviewed by police, he also admitted that he had visited it in the days prior to her murder. He said that he went there to meet with several librarians — but none of them could remember him. Authorities had also arrested him eight months prior on sexual assault and kidnapping charges, although they largely fell apart in court. Eventually, the trail went cold. “The kids in school were all terrified, as was everyone in the neighborhood. We were all on high alert,” said Enes Drake, a substitute teacher, according to the Connecticut Post. “The guy was never caught, so we were always looking over their shoulders.” However, he may have been caught now...
https://www.westernjournal.com/l/loren-eaton/3-decades-11-year-old-girls-murder-suspect-finally-arrested/?utm_source=Email&utm_medium=conservativevideos&utm_campaign=dailyam&utm_content=libertyalliance
VIDEO:   https://www.youtube.com/watch?v=SiTP3KbBpxE
.

Thomas Gallatin:  Current Democrat presidential frontrunner and former Vice President loosew lips liar-Joe Biden finds himself the target of “friendly” fire. But the truth of the matter is, he lit this bomb himself. In a clearly misguided attempt to tout his own history of bipartisan compromise, loose lips liar-Biden noted his past working relationship with former Sen. James O. Eastland.
Referencing Eastland, a racist southern Democrat well known for his promotion of segregation against the “inferior race” of blacks, was a move loose lips liar-Biden’s own advisers warned him against.

Following loose lips liar-Biden’s remarks on Eastland it didn’t take long for his Democrat presidential opponents to see blood in the water. Sen. lowlife-Kamala Harris (D-CA) opined that loosev lips liar-Biden “doesn’t understand the history of our country and the dark history of our country.” Sen. scumbag-Cory Booker (D-NJ) demanded an apology, and both Senators Elizabeth dinky-Warren and commie-Bernie Sanders took the opportunity to offer criticism.

A couple of quick observations can be made here. First and foremost is loosec lips liar-Biden’s own misrepresentation of bipartisan compromise. He worked with Eastland, who was a big-government progressive Democrat/“Dixiecrat” and not a conservative as some within the mainstream media have erroneously asserted. In fact, loose lips liar-Biden’s example serves only to demonstrate his long history as a savvy political opportunist.

Second, Democrats clearly desire no civility when it comes to President Donald Trump and Republicans. loose lips liar-Biden, the only leading Democrat presidential contender who isn’t a socialist, is in very real danger of being weeded out by the party’s intolerant Left.

Finally, the truth is, unlike the other Democrat candidates, loose lips liar-Biden has recognized that the “hate-Trump” and “free-stuff” messages aren’t going to win the election, and he’s making a half-hearted and fingers-crossed call for civility. Unfortunately for loose lips liar-Biden, he is a gaffe machine. With 50 years in government, surely he could have come up with a better example of bipartisan compromise and civility than chumming up to fellow Democrats infamously known for their racism.

As the fallout continues, it will be interesting to see if loose lips liar-Biden is able to recover. Will he stick to his (double-barrel shot) guns or eventually capitulate to the outrage mob and apologize?  ~The Patriot Post