.
Mattis: Military moving equipment to border
ahead of migrant caravan by Lolita C. Baldor
{washingtontimes.com} ~ The U.S. military has already begun delivering jersey barriers to the southern border in conjunction with plans to deploy active duty troops there... U.S. Defense Secretary Jim Mattis said Sunday as a caravan of Central Americans slowly heads across Mexico toward the United States. Mattis told reporters traveling with him that details of the deployment are still being worked out but he should have them Sunday night. They will include exactly how many forces are needed. The additional troops will provide logistical and other support to the Border Patrol, and will bolster the efforts of the approximately 2,000  National Guard forces already there. The new forces are expected to provide logistical assistance such as air support and equipment, including vehicles and tents. National Guard troops routinely perform those same functions, so it is not clear why active duty forces are being used. President Donald Trump for the past week has been calling attention to the caravan heading by foot into southern Mexico, but it is still hundreds of miles from U.S. soil...
https://www.washingtontimes.com/news/2018/oct/28/james-mattis-says-military-moving-equipment-us-mex/?utm_source=Boomtrain&utm_medium=manual&utm_campaign=20180326&utm_term=newsalert&utm_content=newsalert&bt_ee=nB%2F0Iyu%2BSWkQwMdrvVNQ1urW2cVGk%2BEfwzpeHFBR9tL2QvdPAkjoXeX5x7SNHn9T&bt_ts=1540735513221
.
Early Voters in Texas Say Their Ballots are
Being Changed by Machines 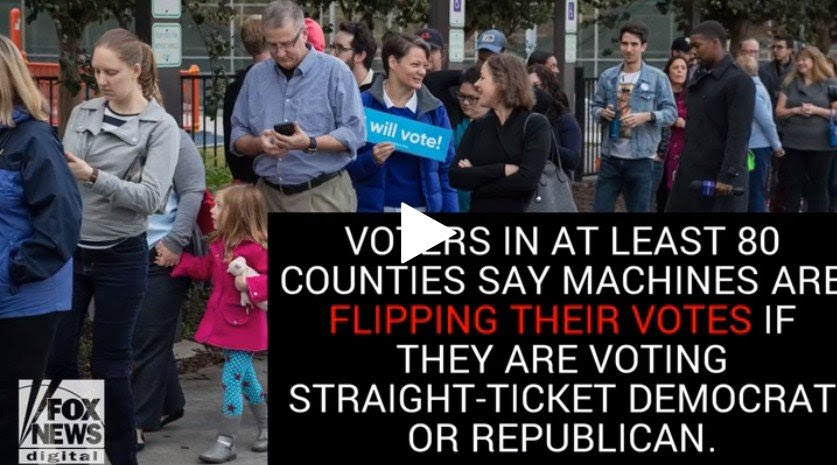 by  TORI MCNABB
{redrightvideos.com} ~ Early voters in Texas are reporting that their ballots are being changed by electronic voting machines in at least 80 counties throughout the Lone Star State... Both dummycrats-Democrat and Republican voters have alleged that, when voting straight-party tickets, their ballots were changed to support the other party. On Friday, the Texas Secretary of State Rolando Pablos’ office responded to reports of ballots being “flipped,” and admitted that there were issues, however, through a spokesperson, said the fault was with the voters, not the machines. “The Hart eSlate machines are not malfunctioning, the problems being reported are a result of user error – usually voters hitting a button or using the selection wheel before the screen is finished rendering,” said Pablos’ office, via spokesman Sam Taylor. Taylor stated that his office urged “all Texans casting a ballot to take their time, slow down, and carefully review their ballot before casting one.”...  https://redrightvideos.com/early-voters-in-texas-say-their-ballots-are-being-changed-by-machines/?utm_source=RRV%20newsletter&utm_medium=email&utm_content=subscriber_id:253196&utm_campaign=Early%20Voters%20in%20Texas%20Say%20Their%20Ballots%20are%20Being%20Changed%20by%20Machines
.
Preview Tonight: Fox News Goes for the
Cord-cutters with Its New Online Service Fox Nation

by Peter Barry Chowka
{americanthinker.com} ~ The Fox News Channel (FNC) is set to start promoting the launch of its major new online political, and mostly conservative, streaming service – Fox Nation... in an hour-long program that airs tonight at 8 PM ET/PT. The tag line for the new Web brand is “Fox Nation – Opinion Done Right.” The fact that New Fox, the streamlined company that is emerging from the breakup of Rupert Murdoch’s hegemonic far flung media empire, is gearing up a full-service subscription Internet video channel is significant. It is in large part a recognition that traditional cable television, despite generating revenue that is still hefty, represents the past and is starting to tank. Both its outdated platform and its audience are aging, and its growth – and profits – have largely plateaued. Television’s future increasingly appears to belong to on-demand digital and mobile applications, which are more in sync with people’s lifestyles and appeal to a younger demographic that is coveted by advertisers. A larger share of that younger audience, generally immune to cable news, is what Fox Nation is hoping to capture. Increasing competition these days is coming from Internet-only alternatives like the well-funded CRTV, currently the Internet television home of conservative talk stars Mark Levin, Michelle Malkin, and Eric Bolling. Not to mention mega streaming services like Netflix and Hulu, which continue to show impressive growth in numbers of subscribers, unlike cable. There is also a plethora of smaller scale new media and alternative media post-print options, most of them free to access, that are thriving on YouTube and other digital media platforms. The first incarnation of Fox Nation started as a free Web complement to Fox News dot com back in March 2009, just two months after President Barack scumbag/liar-nObama assumed office. Around that time, the country’s political polarization was increasing in intensity the conservative Tea Party Movement would be birthed a few months later, and Fox Nation was designed as an outlet to take advantage of the growing popularity of opinion-based reporting and videos. Much of the content was derived from what Fox News was broadcasting. Reader comments and debates were also encouraged...
https://www.americanthinker.com/articles/2018/10/preview_tonight_fox_news_goes_for_the_cordcutters_with_its_new_online_service_fox_nation.html
.
Exposed: Inside The DOJ Hit Squad
by RACHEL ALEXANDER
{wnd.com} ~ As more information comes out, peeling back the onion of the Department of Justice... Republican leaders are becoming increasingly alarmed at the abuse of power there. Here’s what we know: Former Attorney General under Barack scumbag/liar-nObama, scumbag-Eric Holder, identified and placed sympathetic ideologues in key departments of the DOJ and FBI. They were also placed in the IRS, the FEC and the IRS. This all combined to form a “Red Team” that would target, isolate and destroy opponents of scumbag/liar-nObama or his legacy. Reportedly, both dumjycrats-Democrats and Republicans were on the list, but the majority was conservative leaders. They mapped out weak targets, then the IRS, SEC or FEC would research them deeply, looking for any mistakes or missteps. Once information was gathered that would spark interest, it was leaked to friendlies in the press, politicians or sympathetic nonprofits, such as the Sunlight Foundation. By doing, so they covered their tracks to avoid the charge of targeting. Multiple sources in Congress have told me the DOJ would then hijack these administrative agencies’ actions, bringing these investigations “in house” and handling them as felony investigations. The targeted list enemies list was developed and fleshed out by the Red Team or “hit squad” Once the DOJ took a case, it moved without interference, using broad powers to issue subpoenas and charges in federal criminal indictments...  https://www.wnd.com/2018/10/exposed-inside-the-doj-hit-squad/
.
Homeland Security Oversight Chairman Ron Johnson Discusses
Mail IED’s, Synagogue Shooting and Migrant Caravan…

by sundance
{theconservativetreehouse.com} ~ Senator Ron Johnson is Chairman of the Senate Homeland Security Committee with direct oversight over the Department of Homeland Security... Chairman Johnson is interviewed by Maria Bartiromo on current events including the Central American migrant caravan moving toward the southern U.S. border; and the vulnerabilities with Chinese cyber-hacking.
https://theconservativetreehouse.com/2018/10/28/sunday-talks-homeland-security-oversight-chairman-ron-johnson-discusses-mail-ieds-synagogue-shooting-and-migrant-caravan/
VIDEO:  https://www.youtube.com/watch?v=tN3iGmIj-yo
.

by Marc A. Thiessen

In announcing his decision to withdraw from the 1987 Intermediate-range Nuclear Forces (INF) Treaty, President  Trump cited Russia’s repeated violations and the fact that the treaty does not bind China, which is engaged in the world’s most ambitious ballistic missile development program. But Trump’s withdrawal may also be designed for another purpose. It sends a subtle but unmistakable message to North Korea: If you refuse to denuclearize, we can now surround your country with short- and medium-range missiles that will allow us to strike your regime without warning.
At the moment, the Trump administration appears to be making little progress in nuclear talks with Pyongyang. The threat of deployment of intermediate-range missiles in Asia could change the dynamics of those negotiations. Recall that in 1983, President Ronald Reagan announced plans to deploy hundreds of U.S. intermediate-range Pershing II missiles in Western Europe in response to the Soviet Union’s deployment of SS-20 nuclear missiles. The U.S. deployment sparked mass protests throughout Europe, but it also put enormous pressure on Moscow — and in so doing laid the groundwork for a series of arms control breakthroughs, including the INF Treaty.
By withdrawing from the INF Treaty, Trump can now put similar pressure on Pyongyang. The treaty barred both conventional and nuclear land-based missiles with a range of 300 to 3,400 miles. Freed from the treaty’s constraints, the United States can now deploy hundreds of conventional short- and medium-range missiles to bases in Asia, including in Guam (2,100 miles from North Korea) and Japan (650 miles). There would no longer be a need to send U.S. aircraft carriers on temporary deployments to waters off the Korean Peninsula as a sign of military strength. The deployment of intermediate-range missiles in the region would put North Korea permanently in our crosshairs.
Pyongyang certainly does not want these U.S. missiles on its doorstep. Neither does Beijing, which knows such a deployment would restore U.S. military supremacy in the Pacific. According to Adm. Harry Harris, former commander of U.S. Pacific Command, China possesses the “largest and most diverse missile force in the world” — and 95 percent of its missiles “would violate the INF [Treaty] if China was a signatory.” The fact that Beijing has such missiles, while the United States does not, puts the United States at a strategic disadvantage in any conflict with Beijing. As my American Enterprise Institute colleague Dan Blumenthal pointed out in The Washington Post, our only possible response would be to strike China with intercontinental ballistic missiles — an unacceptable escalation. By contrast, the U.S. withdrawal from the INF Treaty allows deployment of conventional mobile ground-based missiles in Guam and Japan, improving our ability to deter Chinese aggression.
Trump can deploy Tomahawk cruise missiles on ground launchers to the Pacific almost immediately after withdrawal from the treaty. Withdrawal would also pave the way for U.S. development and deployment of new missiles banned by the treaty, as well as new hypersonic weapons — which travel five times faster than the speed of sound — to compete with China’s massive investment in these capabilities. This would be a massive strategic setback to both China and North Korea.
So by withdrawing from the INF Treaty, and clearing the way for such deployments, Trump has given the United States a massive new bargaining chip. North Korea now has a new incentive to denuclearize, and China has a new strategic interest pressuring them to do so.
It still may not work. But if those negotiations fail, Trump’s INF Treaty withdrawal has given the United States a fallback option that will allow Washington to more effectively deter both Beijing and Pyongyang — and reassert American military primacy in the region.

https://patriotpost.us/opinion/59108?mailing_id=3819&utm_medium=email&utm_source=pp.email.3819&utm_campaign=snapshot&utm_content=body
E-mail me when people leave their comments –
Follow