by theconservativetreehouse.com
{theconservativetreehouse.com} ~ On December 27th CNN Legal Analyst Paul Callen appeared on television to discuss his recent Op-Ed... that runs counter to the preferred engineering of CNN executive narrative sellers. Paul Callen had accepted the CNN-echo chambered position that President Trump was making unfounded accusatory statements toward the FBI and Department of Justice. However, then Mr. Callen broke the cardinal rule, he actually did some investigating of the claims he was criticizing.  To CNN’s horror, Paul Callen came away from his research with an evolved and informed position that Trump was right, and his detractors were wrong...   https://theconservativetreehouse.com/2017/12/29/curiously-missing-cnn-op-ed-supportive-of-president-trump-mysteriously-appears-two-days-later/
VIDEO:  https://www.youtube.com/watch?v=2VlQhGUJtWs
.
FBI Used Libtard’s Lawsuit To
Get Search Warrant On Sheriff Clarke

by rickwells.us
{rickwells.us} ~ Sheriff David Clarke was targeted by the corrupt weaponized FBI at the same time they were engaged in protecting liar-Hillary Clinton... fabricating evidence against President Trump, and using it and other illegal methods in smearing his reputation in their attempts to remove him from office. Sheriff Clarke had been the target of harassment as he sat in his first class seat aboard an American Airlines flight from Dallas to Milwaukee. One of the passengers, Dan Black, recognized Clarke as he was passing in the aisle and stopped, asking the Sheriff if he was David Clarke. When Clarke affirmed his identity, Black attempted to  intimidate him by standing over him in a threatening manner. His attorney described the incident, saying, “Plaintiff then, while standing over Clarke and in very close proximity to Clarke given the confines of the airline cabin, and in a physically threatening manner, stared at Clarke and shook his head at him for a prolonged period of time. Clarke asked plaintiff if he had a problem with him, to which plaintiff did not respond.”...  https://rickwells.us/fbi-search-warrant-clarke/
.
The Scale of FBI and DOJ
Corruption is Beyond Comprehension

by theconservativetreehouse.com
{theconservativetreehouse.com} ~ Let us spend some productive time actually thinking about the processes of how to eliminate the entrenched tentacles of the corrupt deep state.. specifically surrounding the politicization of the FBI and Dept of Justice, with a reasonable amount of intellectual honesty toward the scale of the endeavor. It is entirely understandable that people are frustrated because the administrative agents within the Deep State apparatus appear to operate in a system, of their creation, that allows them to operate above the rule of law. Righteous voices rising up in frustration demanding action; wholesale destruction of those usurping agents with extreme prejudice. If you spend time looking at the scale and scope, I mean honestly looking at how deeply enmeshed those ideological entities are within the system, you would also have to admit the problem is not just a matter of eliminating a few dozen DOJ lawyers and FBI agents.  The issue is much bigger...  https://theconservativetreehouse.com/2017/12/29/the-scale-of-fbi-and-doj-corruption-is-beyond-comprehension/
.
Despite threatened crackdown, few leakers
caught under Trump and Jeff Sessions

by Steven Nelson
{washingtonexaminer.com} ~ With his job performance reviewed negatively on Twitter by his boss, Attorney General Jeff Sessions... convened a press conference to declare a crackdown on illegal leaks to the press. “We are taking a stand. This culture of leaking must stop,” Sessions said at the August event, shortly after President Trump fumed that the attorney general was taking a “VERY weak” approach to disclosures of classified information. The Justice Department "has more than tripled the number of active leak investigations compared to the number pending at the end of the last administration,” Sessions  said at the press conference... http://www.washingtonexaminer.com/despite-threatened-crackdown-few-leakers-caught-under-trump-and-jeff-sessions/article/2644606?utm_campaign=Washington%20Examiner:%20News%20From&utm_source=Washington%20Examiner:%20News%20From%20-%2012/30/17&utm_medium=email
.
Senator Lindsey Graham Just Confirmed The
Steele Dossier Was Used For 2016 FISA Warrant
by theconservativetreehouse.com
{theconservativetreehouse.com} ~ Everyone suspected the sketchy Steele Dossier was what corrupt FBI and DOJ officials used to get the October 2016 FISA warrant against Trump... FBI and DOJ officials refuse to answer that question publicly. Despite a hundred different ways congressional investigators have asked the question, and despite numerous on-camera questions to FBI and DOJ officials about the 2016 FISA process, no-one had definitively confirmed the Christopher Steele ‘Russian Dossier’ was the underlying evidence for the 2016 FISA application to gain wiretaps and electronic surveillance upon presidential candidate Donald Trump.   UNTIL NOW. Senator Lindsey Graham just confirmed the sketchy Steele Dossier was used to get the wiretap and surveillance warrant from the FISA court.  Brian Kilmead understood what he was hearing was serious, but didn’t quite catch the specific gravity of it. Watch at 04:10...  https://theconservativetreehouse.com/2017/12/30/breaking-senator-lindsey-graham-just-confirmed-the-steele-dossier-was-used-for-2016-fisa-warrant/
VIDEO:  https://www.youtube.com/watch?v=P4_5mrdWnvQ
. 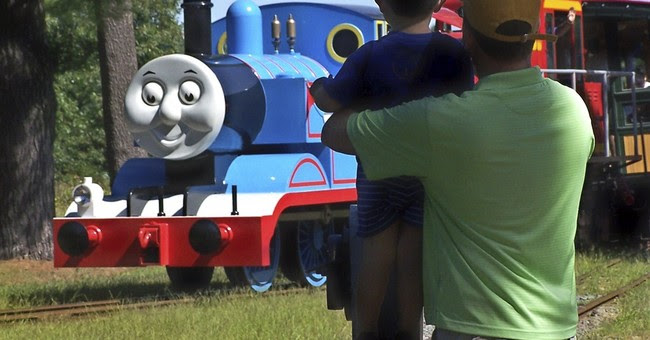 by Cal Thomas
{townhall.com} ~ DUBLIN, Ireland -- "Try a Little Tenderness" is a song written by Jimmy Campbell, Reg Connelly and Harry M. Woods. According to Wikipedia, it was first recorded on Dec. 8, 1932, by the Ray Noble Orchestra with vocals by Val Rosing. Probably these names are as unfamiliar to us today as the demonstration of tenderness is in our modern political culture.

This song and its sentiment came rushing back to me as I witnessed a stunning act of tenderness while crossing the Irish Sea last week on a ferry bound for Dublin.

While eating breakfast in the ship's lounge, I noticed a man playing with his young son, who appeared to be about 3 years old. The boy said "daddy" in such a loving way that it touched my heart and reminded me of special moments with my own children when they were that age.

What happened next was so heartwarming that I don't think I shall ever forget it. The boy suddenly became ill and began vomiting. The father never raised his voice or changed his demeanor. Instead, he picked up his son and held him close, saying, "That's all right" and "it will be all right," as the boy continued to be sick on himself, his father and the floor.

No one raised their voice. Others in the lounge did not stir uncomfortably. Members of the crew came over and began cleaning up the boy, the father and the floor, as if they were assisting someone who had just spilled a cup of coffee. I can't recall seeing anything like it.

When they were done, the father took the boy's stuffed bear, handed it to his son, who clutched it close, and then the father, still stained from the incident, pressed the boy to his chest until he fell asleep in his arms. I turned to him and said, "You're a good father." He smiled.

Why am I sharing this in a column? The answer is that tenderness and love are such powerful forces for good it is a wonder we don't practice them more often. 2017 was one of the ugliest political years in recent memory. Nasty things were said by Republicans about Democrats and Democrats returned rhetorical fire. Names were called and labels applied. It was repulsive and nothing good came from it, did it?

I am not so naive as to suggest that any of this toxic behavior is about to change in a new year, especially one in which there will be congressional elections, but is it too much to ask that we start treating each other more like friends than members of ISIS, more like fellow Americans than North Koreans?

If our goal is to change minds and hearts about issues important to us, which approach do you think might work better; treating political opposites like a burdensome mother-in-law who overstays her holiday visit, or demonstrating at least a degree of kindness and tenderness?

The song referenced above was written near the start of the Great Depression. It was a subtle suggestion for a man to love his wife who had nothing to wear except "the same shabby dress."

We all have much more these days, but material possessions and the unending quest for political power have robbed us of things of far greater and longer-lasting value and importance.

In this new year, could we hug each other a little more, speak a little softer and, yes, try a little tenderness, especially in our political discourse?
https://townhall.com/columnists/calthomas/2017/12/30/try-a-little-tenderness-in-2018-n2428038?utm_source=thdaily&utm_medium=email&utm_campaign=nl&newsletterad=
E-mail me when people leave their comments –
Follow