0
TheFrontPageCover
~ Featuring ~
Democrats Turn Up the Heat on Climate 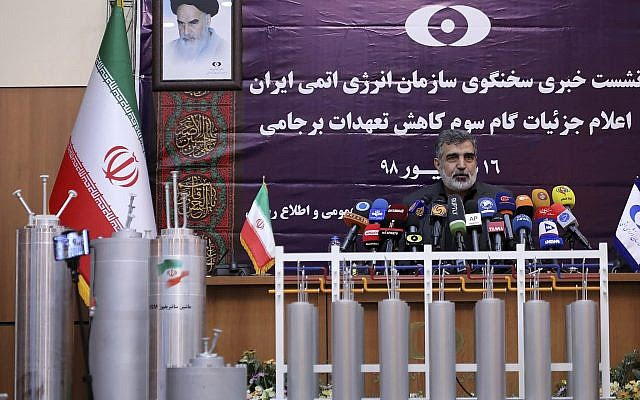 By NASSER KARIMI and JON GAMBRELL
{ timesofisrael.com } ~ Iran has begun injecting uranium gas into advanced centrifuges in violation of its 2015 nuclear deal with world powers, a spokesman said Saturday... Behrouz Kamalvandi of the Atomic Energy Organization of Iran made the remarks in a news conference carried on live television. He spoke from a podium with advanced centrifuges standing next to him. Iran already has breached the stockpile and enrichment level limits set by the deal, while stressing it could quickly revert back to the terms of the accord, if Europe delivers the sanctions relief promised in return for curbing Tehran’s nuclear program. Kamalvandi warned that Europe had little time left to save the deal. US President Donald Trump withdrew America from the accord over a year ago before imposing crippling trade sanctions on Iran.“As far as the other side does not implement their commitments, they should not expect Iran to fulfill its commitments,” Kamalvandi said. Kamalvandi said Iran had the ability to go beyond 20 percent enrichment of uranium. Analysts say 20% is just a short technical step away from 90% enrichment, which is weapons-grade level. Kamalvandi warned several times in his comments that Iran was rapidly approaching a point that would mean a full withdrawal from the deal...
https://www.timesofisrael.com/iran-injects-uranium-gas-into-advanced-centrifuges-violating-nuclear-deal/?utm_source=The+Daily+Edition&utm_campaign=daily-edition-2019-09-07&utm_medium=email
.
In Fox News debut, Sarah Sanders says she
still faces harassment for her Trump support

by thenationalsentinel.com ~ Former White House spokeswoman Sarah Huckabee Sanders, who gave the mainstream media as good as she got during her tenure... said during her debut on Fox News that she still faces harassment from people over her support for President Donald Trump. Booted out of a Virginia restaurant in 2018 by a triggered owner because she was a Trump administration official, she told “Fox & Friends” that she still encounters people who say “nasty” things trying to spark a reaction.“What I find interesting is 99 percent of the people who come over to say something negative, and to attack you, are women. I find that very startling from a group of people that claim to be the champions of women empowerment,” Sanders said. “I’m only the third woman and the first mom to ever be the White House press secretary. Yet women attack me relentlessly, instead of being proud that we have more women doing those types of jobs,” she added. Sanders says her usual response is to “nod, smile and say ‘thank you for your time’ and walk on.” Last year, the co-owner of Red Hen in Virginia Stephanie Wilkinson asked Sanders to leave her restaurant, which sparked a backlash from conservatives and Trump supporters. Corey Stewart, a Republican candidate for the U.S. Senate in Virginia, led a Bikers for Trump rally at The Red Hen to protest what the Sanders incident and to show Wilkinson that she’s not the only one who can draw a crowd...
https://thenationalsentinel.com/2019/09/06/in-fox-news-debut-sarah-sanders-says-she-still-faces-harassment-for-her-trump-support/
.
Sen. Joe Manchin Is Out, but an Actual
Progressive Is Making a Serious
Run for West Virginia Governor by Aída Chávez
{ theintercept.com } ~ After months of deliberation, Sen. Joe Manchin, the most conservative Democrat in the Senate and a frequent Donald Trump ally, announced on Tuesday... that he will not run for governor of West Virginia in 2020. Manchin’s decision to pass on a challenge to billionaire Republican Gov. Jim Justice practically clears the field for Stephen Smith, a 39-year-old community organizer who is running a progressive-populist campaign like no other in the state’s recent history. Smith’s anti-establishment campaign, dubbed West Virginia Can’t Wait, recently out-raised all of its Republican opponents — including the incumbent — combined, almost entirely through small-dollar donations. And in late July, his campaign became the first in West Virginia history to unionize, ratifying a collective bargaining agreement with Campaign Workers Guild. “West Virginia needs a movement, not a king,” Smith’s campaign said in a statement following Manchin’s announcement. “No elected official–not Jim Justice, not Joe Manchin, not me–can save us. We have to save ourselves. So while the media and political class were watching this soap opera unfold, our volunteers were busy building a people’s political machine around the state.” Smith supporters point to Paula Jean Swearengin, an environmental activist who challenged Manchin from the left in 2018, as evidence of the desire for real grassroots opposition within the state. Though Manchin won the primary election, Swearengin managed to win 30 percent of the vote with virtually no name recognition and only $179,000. Manchin, who has been the state’s most prominent Democrat for decades, has voted with Trump’s agenda more than 60 percent of the time. He’s a staunch ally of the fossil fuel industry, supports the border wall, once shot the “cap-and-trade” climate bill with a rifle, and was the lone Democrat to vote for the confirmation of Brett Kavanaugh to the Supreme Court...
https://theintercept.com/2019/09/03/joe-manchin-governor-stephen-smith/?utm_source=The+Intercept+Newsletter&utm_campaign=8053036ac4-EMAIL_CAMPAIGN_2019_09_07&utm_medium=email&utm_term=0_e00a5122d3-8053036ac4-131896129
.
Israel and American Jewry
A Call for Unity and Dialogue

by Vladimir Sloutsker
{ algemeiner.com } ~ Charles Dickens had it right: “It was the best of times, it was the worst of times.” Seventy-one years following its independence... the Jewish state continues to astound with both a lengthy list of accomplishments that defy its young age... and the daunting challenges of a nation born in the world’s most unstable region. On the one hand, good times never seemed so good. The economy is powering ahead, tourism is at record highs, and there is an ever-growing list of diplomatic achievements, including the warming of ties with our Arab neighbors and the Persian Gulf states. At the same time, there is no question that these are also challenging times with a number of dark clouds on the horizon. First and foremost are, of course, Israel’s uniquely ubiquitous security challenges — from Hamas in the south to Hezbollah in the north, and their primary sponsor, Iran, ever-present and ramping up its belligerence of late. I have no doubt that Israel, including our very able military, can and will overcome the security threats. That doesn’t keep me awake at night. What does give me a great level of concern is how we go about healing the rift and reinforcing the bond between Israel as the Jewish state, and our brothers and sisters in the Diaspora, especially the United States, being the largest and most influential Jewish community outside Israel. There can be no “beating around the bush:” The current state of relations between Israel and American Jewry is strained, in part due to the polarizing and increasingly bipartisan nature of politics both in America and Israel, but also due to a lack of dialogue and communication between us. As president and co-founder of the Israeli-Jewish Congress (IJC), I have devoted our Israel-based organization to strengthening this special bond and serving as a bridge between the Jewish state and the Jewish people by creating opportunities for meaningful engagement and dialogue.The better we understand one another, our concerns and our aspirations, the more we can narrow the divide and strengthen our bond...
https://www.algemeiner.com/2019/09/06/israel-and-american-jewry-a-call-for-unity-and-dialogue/?utm_content=opinion1&utm_medium=daily_email&utm_campaign=email&utm_source=internal/
.
Hamas Vows Revenge Against Israel for Deaths
of Rioters on ‘Especially Violent’
Day on Gaza Border

by algemeiner.com ~ More than 6,000 Palestinians rioted on the Israel-Gaza Strip border on Friday in an “especially violent” manner, the IDF said... The rioters — hurling explosive devices, grenades, firebombs and rocks — damaged the border fence in several locations, according to the Israeli military. A number of Palestinians were said to have breached the border and briefly crossed into Israeli territory before returning to Gaza. Two were detained on the Israeli side of the border and taken in for questioning. IDF troops responded with riot-dispersal means. Health officials in Hamas-ruled Gaza said two Palestinian teenagers were killed, and 70 other demonstrators were injured, including 38 by live fire. Hamas warned that Israel would be “held accountable for these crimes.” In the past, Gaza-based terror groups have sometimes retaliated for the deaths of Palestinian rioters on the border with rocket fire into southern Israel. Late Friday night, air-raid sirens sounded in Sderot and a rocket fired from Gaza struck an open area near the southern Israeli city. Border violence has been a near-weekly occurrence since the Hamas-orchestrated “Great March of Return” protests began in March 2018. Last Friday, an Israeli soldier was lightly wounded on the border and an IDF vehicle was damaged.
https://www.algemeiner.com/2019/09/06/hamas-vows-revenge-against-israel-for-deaths-of-rioters-on-especially-violent-day-on-gaza-border/?utm_content=news1&utm_medium=weekend_email&utm_campaign=email&utm_source=internal
.

.
Democrats Turn Up the Heat on Climate

Nate Jackson:  “CNN’s marathon town hall Wednesday night put the climate crisis closer to the center of a presidential election than ever before,” boasted CNN. Fortuitously timed to coincide with Hurricane Dorian’s sweep of the East Coast (the town hall was scheduled long before the hurricane), 10 Democrats took the opportunity of CNN’s seven-hour in-kind campaign contribution to make the case that the planet’s relatively slight warming justifies their real climate agenda: fundamentally transforming the U.S. economy into a socialist enterprise.

In the days leading up to the town hall, several of the candidates released their “moderate” versions of the Green New Deal (GND). We say “moderate” because while the GND carries a staggering price tag of $93 trillion, plans offered by the clown car of Democrat candidates range anywhere from $1 trillion to $16 trillion — completely reasonable by comparison, right?

Wrong. Every Democrat who participated last night either endorsed or cosponsored the outrageous Green New Deal, and their comparatively less expensive individual plans are still totalitarian. Here are just a few platform planks:

Those are radical proposals, which is precisely why Democrats and their Leftmedia super PAC continue screaming that climate is truly a crisis. “We are fighting for the survival of the planet Earth, our only planet,” commie-Bernie Sanders declared. Elizabeth dinky-Warren likewise warned, “This is an emergency, and without rapid and widespread change, we will soon be unable to prevent the worst harms.” She also claims, “The future of our planet depends on it.”

No crisis, no need for radical transformation.

Yet that radical transformation wouldn’t even achieve the goal Democrats claim. “One hundred percent renewable energy defies the laws of physics,” said Tom Pyle, president of the Institute for Energy Research. “It would be impossible to achieve.” A study by the National Academy of Sciences three years ago agreed: “It is extremely difficult to achieve complete decarbonization of the energy system, even when using every current technology and tool available, including energy efficiency and wind, hydroelectric, and solar energy as well as carbon capture and storage, bioenergy, and nuclear energy.”

But, again, saving the planet isn’t the Democrats’ real objective. By their own admission, Democrats are fomenting panic to justify a socialist power grab.  ~The Patriot Post