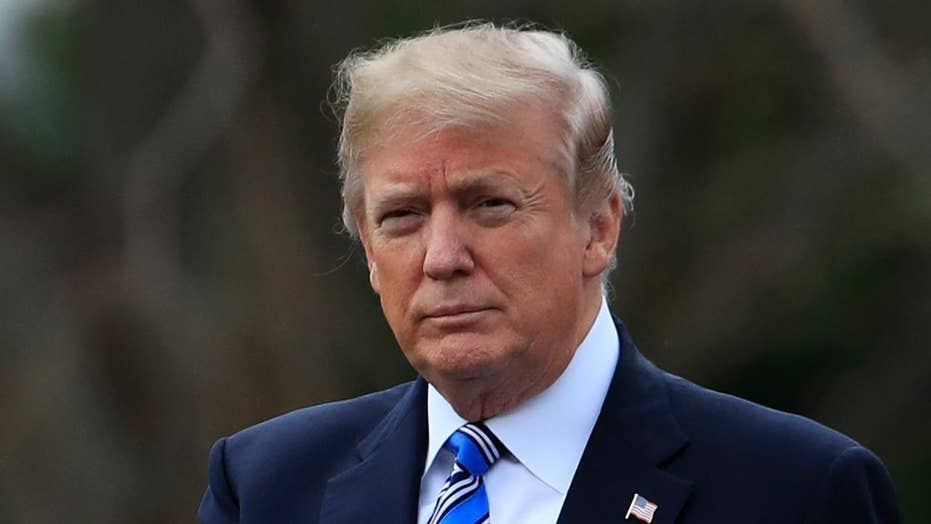 https://a57.foxnews.com/media2.foxnews.com/BrightCove/694940094001/2019/10/27/931/524/694940094001_6098236732001_6098239215001-vs.jpg?ve=1&tl=1" width="301" height="169" />
By Ronn Blitzer, Lucas Tomlinson
and Jennifer Griffin
{ foxnews.com } ~ ISIS leader Abu Bakr al-Baghdadi is dead, sources have confirmed to Fox News... Al-Baghdadi, who took over ISIS after his predecessor Abu Omar al-Baghdadi was killed in 2010, detonated a suicide vest, killing himself when U.S. Special Operations forces entered a compound in northern Syria where he was located, according to a U.S. defense official. No U.S. Special Operations forces were hurt or killed in the raid. “U.S. forces did a terrific job,” a U.S. military source told Fox News.“This just shows it may take time, but terrorists will not find a sanctuary.” The same source told Fox News that biometric tests confirmed that it was indeed Baghdadi. The compound was located near the Turkish border in northwest Syria’s Idlib Province, a known terrorist stronghold that has served as a home to groups linked to al-Qaeda. Al-Baghdadi had long been suspected to be hiding in the Idlib Province. Mazloum Adbi, General Commander of the Kurdish-led Syrian Democratic Forces, touted a “historical operation” in a tweet Sunday morning, crediting “joint intelligence work with the United States of America. ”Regarding Mazloum’s claim of Kurdish assistance in the operation, a U.S. military source simply told Fox News, “the Kurds have always been good partners.” President Trump is scheduled to speak Sunday morning at 9:00 a.m. ET, when he is expected to discuss the operation. Saturday night, he simply tweeted, "Something very big has just happened!" Al-Baghdadi reportedly had a $25 million bounty on his head. Earlier this year, Iraqi intelligence officials speaking to Fox News maintained he was lurking in Syrian border towns, often wearing non-traditional or “regular” clothes, using a civilian car, and making sure anyone around him had no mobile phones or electronic devices in order to bypass detection. Some experts had predicted that as time passed and ISIS losses in the Middle East mounted, it was inevitable that al-Baghdadi would be captured or killed.  https://www.foxnews.com/politics/isis-leader-baghdadi-confirmed-dead-after-apparent-suicide-during-u-s-operation-sources
VIDEO:  https://video.foxnews.com/v/6098244053001/#sp=show-clips
.
Impeachment just got more difficult

https://www.americanthinker.com/images/bucket/2019-10/216832_5_.png" width="145" height="144" />
By Silvio Canto, Jr.
{ americanthinker.com } ~ Once again, cheers for Senator Lindsey Graham. I say "again" because Senator Graham was brilliant in his defense of Judge Brett Kavanaugh a year ago... We just learned that Senator Graham has 40-plus fellow GOP Senators to support a resolution against the current "impeachment" process in the U.S. House. This is how the senator explained it: “They’re creating a shadow process that, I think, is just denying basic fairness. And we’re urging them to go back to what worked before,” Graham said. The resolution is just a statement and nothing more. It won't get the 60 votes to make it to a floor vote. Nevertheless, it makes it clear that getting 20 GOP Senators to flip on President Trump will be very difficult, if not impossible. Yes, the resolution is nonbinding but it shows that the Democrats will need a better case to persuade GOP Senators to convict and reverse a presidential election. Let the voters decide this next year! I guess that's what Democrats must really be scared of.
https://www.americanthinker.com/blog/2019/10/impeachment_just_got_more_difficult.html
.
Former U.S. Attorney Discusses
“High Stakes” Within Flynn Legal Strategy

https://theconservativetreehouse.files.wordpress.com/2019/08/crossfire-hurricane-5-page-strzok-mccabe-comey-brennan-clapper.jpg?w=640&h=509" width="289" height="229" />
by sundance
{ theconservativetreehouse.com } ~ Former Assistant U.S. Attorney Andrew McCarthy weighs in on the latest developments within the Michael Flynn case.  As McCarthy points out... if Judge Sullivan doesn’t accept the defense position of gross misconduct by the prosecution; and if Sullivan does not dismiss the case; Flynn could end up on a worse position than the prior plea agreement. Additionally McCarthy discusses the potential risks present for scumbag/commie-John Brennan, scumbag-James Clapper and scumbag-James Comey; and then goes in to his perspective on the impeachment inquiry.   https://theconservativetreehouse.com/2019/10/26/former-u-s-attorney-discusses-high-stakes-within-flynn-legal-strategy/
VIDEO:  https://www.youtube.com/watch?v=ecD_PmrFLFo
.
Carter Page Sues DOJ, Demands
Review of IG Report Prior to Release 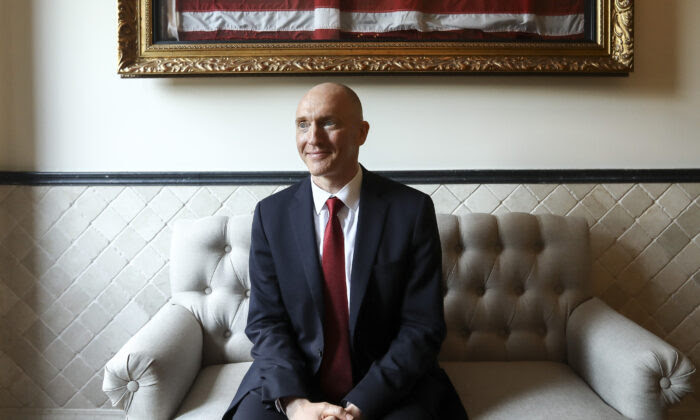 https://img.theepochtimes.com/assets/uploads/2019/10/16/carter-page-e1571249027508-700x420.jpg" width="260" height="156" />
By IVAN PENTCHOUKOV
{ theepochtimes.com } ~ The former Trump-campaign associate who was wiretapped by the FBI, sued the Department of Justice on Oct. 21, demanding that the government provide him with an opportunity to review... before it is made public, the forthcoming inspector general’s report on potential surveillance abuses in his case. In a lawsuit filed with the U.S. District Court in Washington, Carter Page accuses the Department of Justice (DOJ) of violating his privacy rights by failing to grant him the opportunity to review the inspector general’s report before the document is published.  The DOJ Office of Inspector General (OIG) is expected to soon release a voluminous report examining potential surveillance abuses tied to secret court warrants the FBI obtained to spy on Page. Page additionally alleges that the DOJ violated his privacy rights by disclosing copies of the Foreign Intelligence Surveillance Act (FISA) application to the New York Times prior to giving him an opportunity to review the documents. In addition to requesting damages and the prosecution of the officials involved, Page is asking the court to order the DOJ to hand over all of the documents he has long sought to review and amend. “The DOJ, its employees and officers, including those in the affiliated agency of the FBI under their jurisdiction, acted intentionally or willfully in violation of Dr. Page’s privacy rights,” the lawsuit states...
https://www.theepochtimes.com/carter-page-sues-doj-demands-ig-report-be-delayed-for-review_3128379.html
.
scumbag-Adam Schiff Linked
to Prominent Ukrainian Arms Dealer

https://gellerreport.com/wp-content/uploads/2019/10/schittshow.jpg" width="224" height="126" />
by Joe Hoft
{ gellerreport.com } ~ Democrat Rep. scumbag-Adam Schiff is connected to a Ukrainian arms dealer. Is this why he’s willing to lie in front of the nation when accusing President Trump of crimes?... scumbag-Adam Schiff is arguably the biggest liar in Congress…. ever. He now leads the House Intelligence Committee and he oversaw the Intel Committee where he attempted to align President Trump with some ‘trumped’ up allegations concerning his phone call with the President of the Ukraine. scumbag-Schiff lied in his opening remarks and claimed numerous falsehoods about the President’s call in spite of the transcript being provided the day before. His entire description of the President’s call was a lie – we have the transcript and this was not in it! Now we know why scumbag-Schiff is lying – he’s connected with a Ukrainian Arms Dealer! In 2013 Ukrainian Igor Pasternak held two different fund raisers for scumbag-Schiff asking for contributions between $1,000 and $2,500 – Pasternack has also been connected to scumbag-George Soros – Pasternak was reportedly in and around the Ukraine at the same time that Vice President loose lips liar-Joe Biden had his son appointed to the Board of the Ukraine’s largest oil and gas producer...  https://gellerreport.com/2019/10/remove-schiff.html/
.
Turkey-Backed Jihadists in Syria
Kidnap, Murder, and Desecrate 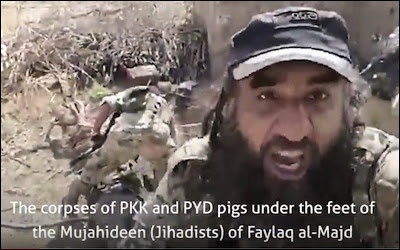 https://www.meforum.org/pics/6571.jpg" width="269" height="168" />
by Seth Frantzman
{ meforum.org } ~ NATO member Turkey has sent hundreds of far-right extremists that it recruited under the banner of the Syrian National Army to fight in Syria... It has used them as both shock troops and canon fodder to fight mostly Kurdish forces along the border, but as a ceasefire began last week these units turned to looting attacking civilians and mutilating corpses, according to videos they posted online. The US says human rights violations may be occurring. Kurdish activists wonder why NATO stands behind religious extremists whose statements look little different than ISIS. The first videos of jihadists being sent to fight Kurds under the banner of 'Syrian rebel' groups appeared in the lead-up to Turkey's offensive on October 9. Videos showed men waving swords and chanting about "killing the kuffar" or "infidels," terminology often used by ISIS. On October 12 a video emerged of a group executing two Kurdish detainees by the side of a road in Syria. According to reports it took place near the M4 highway inside Syria. Another group of Turkish-backed Syrian rebels stopped a convoy of cars that included Future party leader Hevrin Khalaf. She was dragged from the car by her hair, shot and her body stomped on. Members of Ahrar al-Sharqiya, one of many groups in the SNA, were accused of the attack. Video showed the cars being stopped and the aftermath with her lifeless body covered in dirt while the jihadists praise God for helping them murder an unarmed woman.Initial reports said she had been "stoned to death," but the autopsy said she had been been beaten on the head, beaten on the leg, "dragged from her hair causing the hair to take off from the skin of the head." Turkey, a "NATO ally," as the US describes the country, claimed the murder was a "neutralization" of the woman, "a successful operation," according to its leading right wing daily Yeni Safak...
https://www.meforum.org/59660/turkey-backed-jihadists-in-syria?utm_source=Middle+East+Forum&utm_campaign=d8122bdbb5-MEF_Frantzman_2019_10_26_03_50&utm_medium=email&utm_term=0_086cfd423c-d8122bdbb5-33703665&goal=0_086cfd423c-d8122bdbb5-33703665&mc_cid=d8122bdbb5&mc_eid=f33b9e6c12
.

Prior to storming the SCIF, House Republicans held a press conference explaining their intentions. Rep. Matt Gaetz (R-FL) stated, “We’re going to try and go in there, and we’re going to try and figure out what’s going on, on behalf of the millions of Americans that we represent that want to see this Congress working for them and not obsess with attacking a president who we believe has not done anything to deserve impeachment.”

“What is scumbag-Adam Schiff trying to hide?” Rep. Steve Scalise (R-LA) asked. “I think that’s the question so many people have, so many of my colleagues have, so many people in the press should have. Voting members of Congress are being denied access from being able to see what’s happening behind these closed doors where they’re trying to impeach the president of the United States with a one-sided set of rules. They call the witnesses. They don’t let anybody else call the witnesses.”

Not surprisingly, after Republicans entered the room, committee chairman scumbag-Adam Schiff (D-Whistleblower) quickly stopped the hearing. That provoked Rep. Bradley Byrne (R-AL) to assert, “scumbag-Adam Schiff just SHUT DOWN his secret underground impeachment hearing after I led a group of Republicans into the room. Now he’s threatening me with an Ethics complaint! I’m on the Armed Services [Committee] but being blocked from the Dept. Asst. SecDef’s testimony. This is a SHAM!”

Rep. Roger Marshall (R-KS) also called out scumbag-Schiff, stating, “He just got up and left. He doesn’t have the guts to tell us why we can’t come in the room, why he doesn’t want this to be transparent. It’s … the biggest farce I’ve ever seen in my life.”

Predictably, the Leftmedia derided Republicans for a political stunt designed to protect President Trump and obstruct the Democrats’ “legitimate” impeachment inquiry. There’s no question that these Republicans intentionally engaged in theatrics, but they did so to shine a spotlight on the dubious, secretive, and unprecedented manner in which House Democrats have conducted this not-yet-voted-on impeachment inquiry. And the more Republicans can expose the Democrats’ intentional lack of transparency in running this impeachment charade, the better it will be for the American people. Keep in mind that the Democrats’ favorite paper of record, The Washington Post, decided Trump’s presidency was sufficient cause to create a new motto: “Democracy dies in darkness.”

Finally, PowerLine’s Scott Johnson cogently sums it up: “I can’t take anything that leaks out of the closed-door impeachment ‘inquiry’ conducted by Intelligence Committee Chairman scumbag-Adam Schiff at face value. scumbag-Schiff is conducting an impeachment campaign by orchestrated leaks. I decline to follow the leaked testimony until I can take a look at the full record with my own eyes.”   ~The Patriot Post