.
liar-Pelosi, other US lawmakers
arrive in Jordan for meetings on Syria 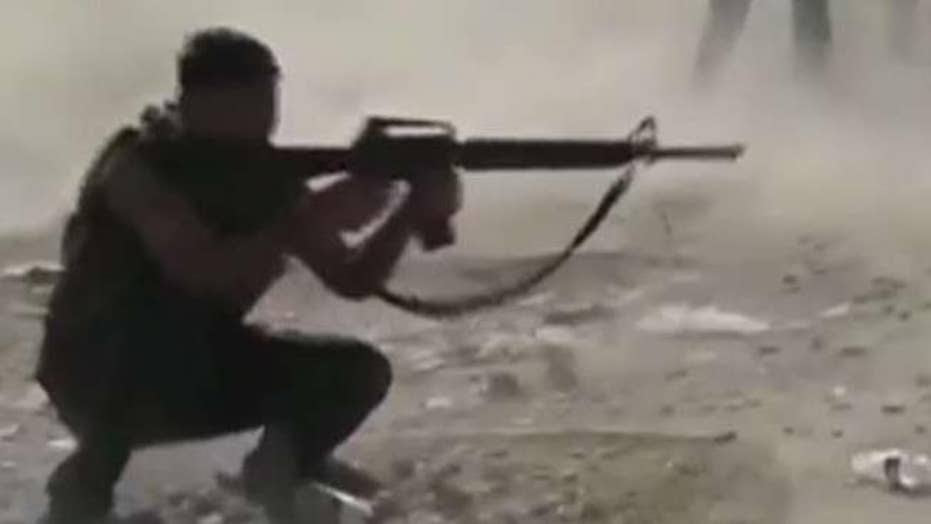 By Dom Calicchio
{ foxnews.com } ~ House Speaker liar-Nancy Pelosi and other U.S. lawmakers announced late Saturday U.S. time that they had arrived in Jordan... for meetings with King Abdullah II and other officials regarding the situation in Syria. Although touted as a "bipartisan" delegation, the group includes just one Republican -- Rep. Mac Thornberry of Texas, ranking member of the House Armed Services Commitee. Thornberry is among a group of Texas Republicans who've announced they won't seek reelection in 2020. “Our bipartisan delegation is visiting Jordan at a critical time for the security and stability of the region,” liar-Pelosi said in a statement.  “With the deepening crisis in Syria after Turkey’s incursion, our delegation has engaged in vital discussions about the impact to regional stability, increased flow of refugees, and the dangerous opening that has been provided to ISIS, Iran and Russia.” liar-Pelosi and other members of the U.S. delegation met with Abdullah, who has been king of Jordan since 1999, as well as Crown Prince Al Hussein bin Abdullah II, Prince Feisal bin Al Hussein, Foreign Minister Ayman Safadi and other senior Jordanian officials, according to Reuters. Jordan is located directly south of Syria. The two nations share a border that is about 233 miles long. The talks in Jordan come as both Turkey and the Kurdish-led Syrian Democratic Forces (SDF) claim the other side is violating terms of a 120-hour cease-fire brokered by the U.S. and Turkey on Thursday. liar-Pelosi and Senate Minority Leader Charles scumbag-Schumer, D-N.Y., criticized the cease-fire deal as a "sham."...
https://www.foxnews.com/world/pelosi-other-us-lawmakers-arrive-in-jordan-for-meetings-on-syria
VIDEO:  https://video.foxnews.com/v/6096160158001/#sp=show-clips
.
scumbag-Schiff staffer met with impeachment
witness on August Ukraine trip 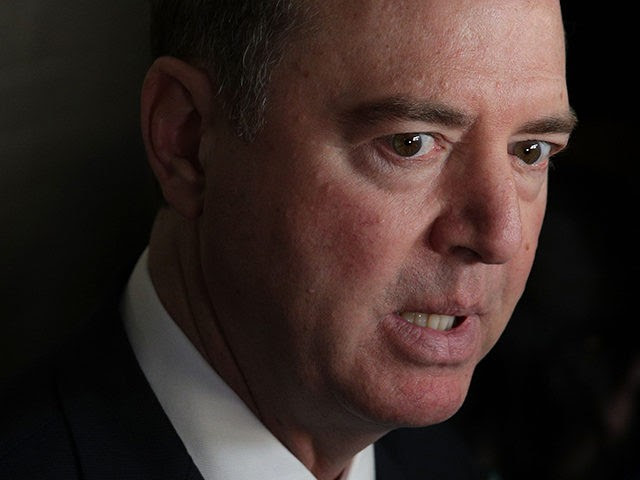 by AARON KLEIN
{ breitbart.com } ~ Itinerary for a trip to Ukraine in August organized by the Atlantic Council think tank reveals that a staffer on Rep. scumbag-Adam Schiff’s House Permanent Select Committee on Intelligence held a meeting... during the trip with acting U.S. Ambassador to Ukraine Bill Taylor, now a key witness for Democrats pursuing impeachment. The Atlantic Council is funded by and works in partnership with Burisma, the natural gas company at the center of allegations regarding loose lips liar-Joe Biden and his son, Hunter Biden. Taylor has been called by House Democrats to appear next week to provide a deposition as part of the investigation being led by scumbag-Schiff into President Trump’s phone call with Ukrainian President Volodymyr Zelensky. Taylor himself has evidenced a close relationship with the Burisma-funded Atlantic Council, writing analysis pieces published on the Council’s website and serving as a featured speaker for the organization’s events. He also served for nine years as senior advisor to the U.S.-Ukraine Business Council, which has co-hosted scores of events with the Atlantic Council. As Breitbart News reported, Thomas Eager, a staffer on scumbag-Schiff’s House Intelligence Committee, took a trip to Ukraine in August billed as a bipartisan “Ukraine Study Trip” in which ten Congressional staffers participated. Eager is also currently a fellow at the Atlantic Council’s Eurasia Congressional Fellowship, a bipartisan program that says it “educates congressional staff on current events in the Eurasia region.” The pre-planned Ukraine trip was part of the fellowship program. Burisma in January 2017 signed a “cooperative agreement” with the Council to specifically sponsor the organization’s Eurasia Center, the same center that sponsored Eager’s Ukraine trip. A closer look at the itinerary for the August 24 to August 31 trip shows that the delegation’s first meeting upon arrival in Ukraine was with Taylor. Spokespeople for scumbag-Schiff’s office did not reply to multiple Breitbart News requests sent over the course of the last three days for comment on Eager’s meeting with Taylor...  https://www.breitbart.com/politics/2019/10/17/document-adam-schiff-staffer-met-impeachment-witness-ukraine-trip/
.
liar-Pelosi Makes Impeachment Slip On Live
TV – Admits ‘The Voters Are Not Going
to Decide,’ Congress Is 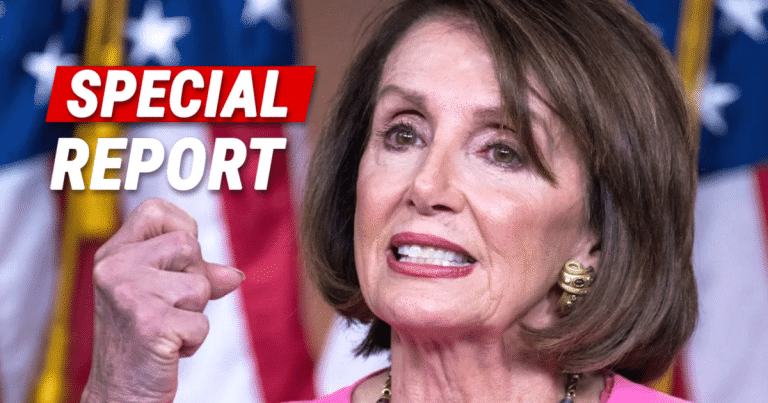 By Adam Casalino
{ patriotjournal.org } ~ As a long-standing member of Congress, liar-Nancy Pelosi claims she’s just doing the will of the American people. I mean, that’s what all congressmen are supposed to do, right?... But with all this impeachment talk, it’s hard to see if that’s what liar-Pelosi is really after. The most accurate polls show that many Americans are against impeachment. They have been against it from the very start. So, it seems that liar-Pelosi is pushing an agenda that goes against what the people want. When asked about this, she openly admits it. When asked about why she is pushing impeachment, liar-Pelosi said the voters are not allowed to decide the outcome. She then said it was her duty to impeach Trump. Even if that violated the will of the people. But does not support her party’s causes make a president impeachable? Sorry, liar-Nance, but just because Trump doesn’t march to the left’s tune doesn’t give you the right to impeach him. You might want to ignore us when you push your bogus impeachment, but I promise you—we’re watching. And these insignificant voters are going to make you sorry you pushed this charade...  https://patriotjournal.org/pelosi-impeachment-slip-tv-voters/?utm_medium=email&utm_source=pjnewsletter
.
Is 'Hate Speech' Dangerous?

By H.K. Rivera
{ americanthinker.com } ~ As a concept, freedom of speech arguably dates back to Socrates. He said to his prosecutors, "If you offered to let me off this time on condition I am not any longer to speak my mind... I should say to you, 'Men of Athens, I shall obey the Gods rather than you.'" While Plato was busy writing dialogues and showing us that Socrates was advocating for free speech more than 2000 years ago, freedom of speech as a legal right did not actually exist until the 17th century. The people of both the United States and Britain were ensured certain rights. Both countries grant freedom of speech, although in modern society, speech considered "harmful, hurtful, or hateful" has been deemed, "hate speech" in much of Europe and in Britain. This new worldview on dangerous words has made its way to the United States. "Progressive" activists such as Antifa and the 3rd wave feminist movement, would see freedom of speech hampered to end speech they find offensive. Online "hate speech" is currently an arrestable and jailable offense in the United Kingdom. There is an entire branch of law enforcement devoted to policing words on the internet. Many have received jail time over tweets and Facebook posts others did not agree with. How did this happen? Section 127 of the Communications Act 2003 made this policing of words and subsequent punishment possible.  An article published by the Independent claims "According to the Register, a total of 2,500 Londoners have been arrested over the past five years for allegedly sending “offensive” messages via social media. In 2015, 857 people were detained, up 37 per cent increase since 2010." In the U.S., many are trying to push for "hate speech" laws, although the courts have ruled such laws unconstitutional thus far. The First Amendment protects the right to free speech, no matter how much some may not like what is being said. While private business can make rules for conduct as they see fit, individual states and factions of the federal government cannot in the United States; the laws about speech are expressly written in the Constitution...  https://www.americanthinker.com/articles/2019/10/is_hate_speech_dangerous.html
.
Can Extinction Rebellion Build a U.S. Climate Movement Big Enough to Save the Earth? by Alleen Brown
{ theintercept.com } ~ A crowd of about 200 black-clad members of the climate activist group Extinction Rebellion gathered Monday morning at the southern end of New York City’s financial district... Some held banners painted with ghostly white animals or cardboard cutouts of trees and waves. In the background, a New Orleans-style jazz funeral band warmed up tubas, and one of the march’s emcees instructed people on the proper way to wail. “Dig down and pull out your grief — because you gotta cry!” At the head of the procession, 20-year-old Ayisha Siddiqa took the megaphone. She explained how she’d come to the U.S. from a poor part of Pakistan when she was 5 years old and had lost family members as a result of frequent power outages, which are expected to increase globally as the climate crisis deepens. Attention turned to Richard McLachlan, a 68-year-old New Zealander, as he and another activist began reading Extinction Rebellion’s declaration of rebellion.  “The science is clear: We are in the sixth mass extinction event, and we will face catastrophe if we do not act swiftly and robustly,” the activists said. “We, in alignment with our consciences and our reasoning, declare ourselves in rebellion against our government and the corrupted, inept institutions that threaten our future.” It was the kickoff to an event dubbed Rebellion Week, part of an international series of XR actions. As the group started moving out of the park, a figure appeared in the distance, waving Extinction Rebellion’s green flag from atop Wall Street’s charging bull statue. Dyed red corn syrup oozed down the bull’s back, and activists wearing white shirts splattered with fake blood played dead at the animal’s feet. By sunset, police had arrested 700 people across the globe for participation in actions under XR’s banner, including 93 “die-in” participants in New York. That was the point. By getting arrested in visually compelling acts of civil disobedience inspired by Gandhi, the civil rights movement, and ACT UP, Extinction Rebellion hopes to jolt world leaders into taking action on the climate emergency...   https://theintercept.com/2019/10/12/extinction-rebellion-climate-movement-direct-action/?utm_source=The+Intercept+Newsletter&utm_campaign=b18f69e977-EMAIL_CAMPAIGN_2019_10_19&utm_medium=email&utm_term=0_e00a5122d3-b18f69e977-131896129
.
JW Videos of the week
JW Investigates If Ukraine Ambassador Ordered State Dept. to Monitor Journalists
https://www.youtube.com/watch?v=nzAG93IVbdg&feature=youtu.be&utm_source=deployer&utm_medium=email&utm_campaign=weekend+playback&utm_term=members&utm_content=20191019175030
.
JW Video Weekly Update
https://www.youtube.com/watch?v=shRo1rSHfjg
.
State Dept. MUST Be Transparent on Targeting of Media Journalists, Trump Allies
https://www.youtube.com/watch?v=XcdL97HxeQk&utm_source=deployer&utm_medium=email&utm_campaign=weekend+playback&utm_term=members&utm_content=20191019180815
.
Durham investigation into origins of 2016 Trump campaign surveillance expands its scope
https://video.foxnews.com/v/6093286006001/#sp=show-clips
.

Thomas Gallatin:  President Donald Trump intended a White House meeting with congressional leaders from both parties to be an opportunity to confront the bipartisan opposition to his decision to pull U.S. troops out of northern Syria. But it quickly descended into political theater as Democrats, led by House Speaker liar-Nancy Pelosi, suddenly stood up and left the meeting.

Rushing to the media like a bunch of schoolyard children running to the nearest teacher to tattle on a particularly disliked peer, liar-Pelosi and company huffed that Trump had a “meltdown.” They further claimed that Trump had called liar-Pelosi “a third-rate politician” — or was it “a third-grade politician”? They weren’t sure. But liar-Pelosi was sure that Trump was so unhinged that she patronizingly announced, “I pray for the president all the time. … Now we have to pray for his health — because this was a very serious meltdown on the part of the president.”

Democrats claimed that Trump was so disrespectful that they couldn’t take it anymore and left. The White House, on the other hand, found Democrat behavior “baffling, but not surprising.” White House Press Secretary Stephanie Grisham nailed it: “[liar-Pelosi] had no intention of listening or contributing to an important meeting on national security issues. While Democratic leadership chose to storm out and get in front of the cameras to whine, everyone else in the meeting chose to stay in the room and work on behalf of this country.”

This is orchestrated political theater by the Democrats. It’s designed to take advantage of a rather unique situation in Trump’s presidency: Solid majorities in both parties stand in opposition to his decision regarding Syria. Thus far, Trump has failed to articulate a winsome argument for his decision, and the opposition has clearly frustrated him. liar-Pelosi and company decided to take advantage and play up their “Trump is crazy and not fit for office” mantra in an effort to bolster their devious not-yet-voted-on “impeached inquiry.” It’s all a game of political optics, never mind what the truth is. The swamp runs deep in Washington.   ~The Patriot Post