.
Lindsey Graham Has Harsh Words For Dems Who Might
Make Next SCOTUS Confirmation Ugly

by Virginia Kruta
{dailycaller.com} ~ South Carolina Republican Sen. Lindsey Graham had harsh words on Sunday for Democrats who might balk at potential replacements... for any upcoming Supreme Court vacancies. “They should have thought of that before they changed the rules,” he said. In light of the recent health concerns surrounding Supreme Court Justice Ruth Bader Ginsburg, pundits and even the White House have begun to take “gingerly preparations” for the possibility that there may be another vacancy to fill during President Donald Trump’s time in office. “Fox News Sunday” host Chris Wallace asked Graham about the potential for another disastrous confirmation hearing, saying, “if you got Donald Trump — again, this is if — you have Donald Trump replacing a liberal icon like Ruth Bader Ginsburg, isn’t that a formula for — I mean, doesn’t that make the Kavanaugh hearings look like a tea party?” “They should have thought of that before they changed the rules,” Graham fired back, referencing former Senate Majority Leader Harry dinky-Reid’s invocation of the nuclear option for judicial nominees. “They try to destroy conservative judges. This decision by Harry dinky-Reid and Chuck scumbag/clown-Schumer may come back to haunt them but I am dead set on making sure it is a conservative nominee,” Graham continued, reminding Wallace that when Democrats were in power, he had voted to confirm scumbag/liar-nObama nominees Sotomayor and Kagan. “And elections have consequences. The rules of the Senate were changed not by me, by them, and we had to do it on the Supreme Court because they would not give us any votes to nominate anybody and  Kavanaugh was a fine man, they tried to destroy him. All this is going to come back to haunt them one day.”
https://dailycaller.com/2019/01/13/lindsey-graham-dems-scotus-confirmation/?utm_medium=email
.
Watch 1 of the Best Attacks on Illegal Immigration Ever.
It Came from Dianne Fein-stein 25 Years Ago 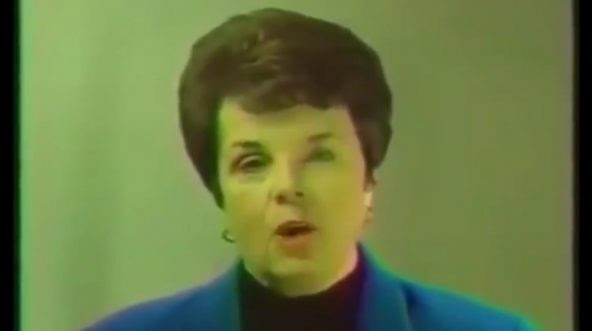 by BENJAMIN ARIE
{westernjournal.com} ~ Hypocrisy seems to be the main Democratic platform these days. On issues like immigration and border security it would be one thing if the left had a consistent message... They still might be wrong, but at least you could give them credit for steadfastly believing in their principles. Instead, the opposite is true. Far from having a consistent stance on immigration, the very same Democrats who are now cheering for open borders and pretending that illegal immigration isn’t a crisis had a very, very different message not so long ago. Here’s a perfect example. In a video that goes back to 1994, none other than Dianne Fein-stein — yes, the Democratic senator who is now implying that enforcing the border is racist — spoke out about the issue, and sounded downright Trump-like.“We can enforce our borders. I think we should enforce our borders,” the outspoken liberal declared on video 25 years ago. Amazingly, Fein-stein even brought up the issue of “anchor babies,” more accurately called birthright citizenship, which she admitted was wreaking havoc on California already over two decades ago.“To have a situation where 40 percent of the babies born on Medicaid in California today are born of illegal immigrants, creates a very real problem for the state,” Fein-stein strongly stated. “Which is in deficit.” Guess what? California is now the state with the highest rate of poverty in the country, thanks in part of illegal immigration and “sanctuary city” policies that attract them...
https://www.westernjournal.com/ct/watch-1-best-attacks-illegal-immigration-ever-came-dianne-feinstein-25-years-ago/?utm_source=Email&utm_medium=usjf&utm_campaign=dailyam&utm_content=usjf
VIDEO 1:  https://twitter.com/almostjingo/status/1083601348711477248?ref_src=twsrc%5Etfw%7Ctwcamp%5Etweetembed%7Ctwterm%5E1083601348711477248&ref_url=https%3A%2F%2Fwww.westernjournal.com%2Fct%2Fwatch-1-best-attacks-illegal-immigration-ever-came-dianne-feinstein-25-years-ago%2F
VIDEO 2:  https://www.youtube.com/watch?v=1AVvdCyeQfI
.
The former ‘First Lady of ISIS’ now loves
Reform Jews, plans to visit Jerusalem 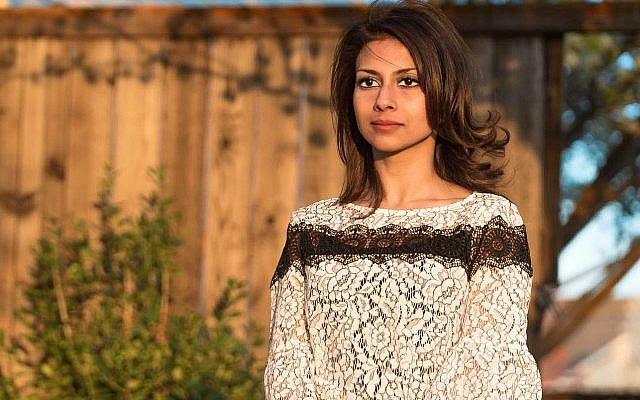 by DAVID HOROVITZ
{timesofisrael.com} ~ Less than six years ago, the British-born Muslim Tania Joya was living in Syria with her husband, an American-born convert to Islam who was becoming an increasingly influential figure in the circles of Islamic State... Next week, she will be giving a talk about “countering the forces of violent extremism” at Temple Shalom, a Reform synagogue in Dallas, Texas. As far as Joya knows, her ex, the former Greek Orthodox Christian John Georgelas who for 17 years has gone under the name of Yahya al-Bahrumi, is still active in Syria with Islamic State, where he is said to head the jihadi terror group’s English-language propaganda operation and to be its most senior American recruit. For her part, Joya has renounced Islam, is becoming increasingly attracted to Jewish customs and rituals, took her sons to help decorate the sukka at Temple Shalom a few months ago, and says she intends to come to Jerusalem. The rapid transformation of Joya’s life — from a self-styled former “hard-core” jihadi and dutiful spouse of an Islamic extremist, to a declared de-radicalization activist — is so stark and improbable as to leave doubts, she acknowledges, in many people’s minds. In a British television appearance a year ago, her hosts cut short her interview after she said, when asked if she still loved her ex-husband, “I don’t love him like I’m in love with him; I love him because he gave me four beautiful, lovely children… If he’s caught, he needs to go to prison, of course… I love him like I love people… Everybody has a good side; everybody has a bad side.” Said her interviewer, Piers Morgan, caustically: “ISIS terrorists don’t have a good side, and so I’m afraid we’re going to end the interview right there.”...
https://www.timesofisrael.com/the-former-first-lady-of-isis-now-loves-reform-jews-plans-to-visit-jerusalem/?utm_source=The+Weekend+Edition&utm_campaign=weekend-edition-2019-01-13&utm_medium=email
VIDEO:  https://www.youtube.com/watch?v=XsnNsHhKpU8
.
.Senator Lindsey Graham -vs- Derp Wallace

by sundance
{theconservativetreehouse.com} ~ Senator Lindsey Graham appears on Derp TV to discuss the latest in the government shutdown... and his request for President Trump to declare a state-of-emergency to build the southern border wall. Senator Graham notes he spoke to President Trump approximately 30 minutes prior to this interview:   https://theconservativetreehouse.com/2019/01/13/sunday-talks-senator-lindsey-graham-vs-derp-wallace/
VIDEO:  https://www.youtube.com/watch?v=6JFqJl2FBpY
.
Netanyahu takes credit for Israel's
weekend strike on Iranian arms in Syria 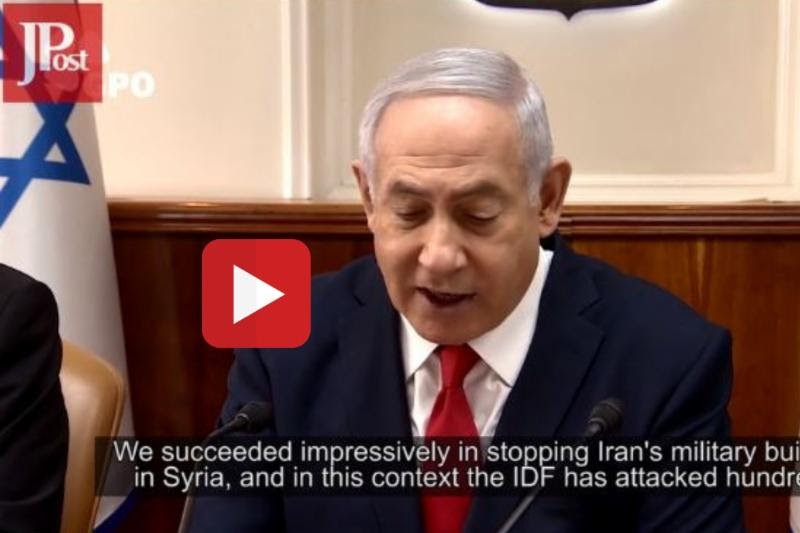 by HERB KEINON
{jpost.com} ~ "In the last 48 hours, Israel attacked an Iranian weapons depot at the Damascus International Airport... reflecting our consistent policy and firm determination to prevent Iran's military buildup in Syria,” Netanyahu said during a tour of the IDF's Galilee Division. “If necessary we will intensify these attacks.”  These comments came a few hours after Netanyahu did something he has done only very rarely since Israel began taking military actions in Syria to enforce its redlines there: publicly claim responsible for an attack just hours after it took place. This rare admission came at the opening of Sunday's weekly cabinet meeting, with Netanyahu also saying that the IDF has “succeeded impressively in stopping Iran's military buildup in Syria, and in this context the IDF has attacked hundreds of times Iranian and Hezbollah targets.” His comments came after outgoing Chief of Staff Lt.-Gen. Gadi Eisenkot said in a New York Times interview on Saturday that Israel had dropped 2,000 bombs on targets in Syria in 2018 alone. “We struck thousands of targets without claiming responsibility or asking for credit,” Eisenkot was quoted as saying about attacks against Iran and its proxies in Syria and Lebanon. “The accumulated number of recent attacks proves that we are determined more than ever to act against Iran in Syria,” Netanyahu told the cabinet...  https://www.jpost.com/Breaking-News/Netanyahu-confirms-Israel-responsible-for-strikes-in-Syria-577176?utm_source=newsletter&utm_campaign=21-2-2018&utm_content=netanyahu-confirms-israel-responsible-for-strikes-in-syria-577176
.

by Michael Swartz:  It was little noted in the traditional year-end media navel-gazing, but North Korean strongman Kim Jong-un actually made news by not making headlines. For the first time since he took power in 2011, the saber-ratting dictator did not test-launch a single missile during 2018. The last launch from North Korea came in November 2017, and although their Yongbyon nuclear facilities are “well maintained” according to satellite analysis, experts believe the facility is not fully up and running.

But any visit from Kim to his patron state of China makes news and raises discussionabout the relationship between China and the United States. In this case, Kim used the Chinese visit to push for another summit with President Donald Trump, hoping that a second round of talks would produce “results that will be welcomed by the international community,” as Chinese state media reported after the meeting between Kim and Chinese President Xi Jinping.
Those in the know, though, realize that one giant reason China has “tolerated” its pesky little nuclear-armed neighbor is the chaos North Korea’s nuclear ambitions created across the Pacific Ocean and the leverage that brought in China’s ambitious struggle to supplant the U.S. as the world’s superpower. Unfortunately for Beijing, Trump isn’t afraid to play hardball, so Kim’s visit to China was also meant to get China on board with North Korea’s bid for relief from the “maximum pressure” approach of economic sanctions put in place to keep Kim’s nuclear ambitions in check.
Getting China to buy in to a softening of sanctions would leave the U.S. as the lone hawk in the game, as South Korean President Moon Jae-in told reporters he would work with the international community for a partial easing of sanctions between North and South. Moon acknowledged, however, that the U.S. would still be a valuable ally in keeping “stability and peace” both for the Korean peninsula in particular and the northeastern region of Asia in general.
As the North Korean leader left Xi and climbed aboard his specially built train to return to Pyongyang, we can be sure that China’s leadership had its own message for Kim to pass along to Trump if a second summit, possibly conducted in Vietnam, indeed comes to pass. With a 90-day truce on tariffs reaching its halfway point this week, negotiations aimed at giving the U.S. “more balanced and reciprocal” trade have slowed to a snail’s pace, worrying the markets but — more important for the Chinese — putting pressure on their export-based economy. While nearly 90% of North Korea’s trade is with the Chinese, its paltry economy and population can’t compare to the prosperous American market and can’t begin to keep China’s factories humming.
No one knows how long Kim will refrain from testing his missile program absent a summit with President Trump. Perhaps he’s biding his time knowing Trump faces reelection next year. But it would surprise no one if that testing hiatus ends about the time additional tariffs are put in place on Chinese imports. There’s more than one way for China to assert its strength, and if landing a spacecraft on the far side of the moonweren’t enough, what better than to have a client state threaten your enemy?
Moreover, China needs to keep North Korea on a short leash. Andy Puzder — a onetime Trump choice for secretary of labor — stated his case in The Wall Street Journal, noting that the Chinese economy is teetering on the brink of recession because of Trump’s hardline approach to trade. “Mr. Xi’s speech was intended to reinforce the myth of an invincible Chinese dragon capable of bullying America into submission with its economic clout. The bluster is a sign of economic weakness,” wrote Puzder, adding, “President Trump’s trade strategy has exposed China’s vulnerability, demonstrating the risks of going toe-to-toe with a determined opponent that happens to be your largest customer.”
Regardless of how this meeting of two adversaries of Liberty went, America’s leadership is resolute and its economy is growing. As always, a stronger America is bad news for communists and dictators everywhere.  ~The Patriot Post

https://patriotpost.us/articles/60490?mailing_id=4008&utm_medium=email&utm_source=pp.email.4008&utm_campaign=snapshot&utm_content=body
E-mail me when people leave their comments –
Follow