by Mark Alexander:  Patriots, we set aside Memorial Day to honor the service and sacrifice of generations of our fellow Armed Forces Patriots, now departed, who defended American Liberty with honor.

Accordingly, I invite you to read our tribute to fallen American Soldiers, Sailors, Airmen, Marines and Coast Guardsmen.
On Memorial Day, flags should be flown at half-staff from sunrise until noon, your local time. Please join Patriots honoring veterans across our great nation by observing a moment of silence at 3:00 p.m. local time for remembrance and prayer. Finally, extend a personal word of gratitude and comfort to surviving family members who grieve for a beloved warrior.   ~The Patriot Post

by rickwells.us
{ rickwells.us } ~ In describing the FBI, President Trump said, “FBI is great. I know so many people in the FBI... The FBI is a fantastic institution but some of the people at the top were rotten apples. James Comey was one of them. I’ve done a great service for this country by getting rid of him, by firing him.” Judge Jeanine asks her guest, Tammy Bruce, why it’s taking so long to get information from the DOJ and if we’ll ever get it. Bruce lays it out plainly, as she usually does, saying, “Well look, they’re stonewalling everyone, because there’s something to hide. That’s normally why you don’t hand over something when you’re supposed to be the morally superior framework, you do that when you want to hide something.” She notes how comfortable President Trump appears in the interview, reminding the audience that “every single prediction he’s made has come true, including one of the earliest ones where he declared that his campaign was being spied on. He was mocked, he was ridiculed, clearly note now that has been confirmed. So people are underestimating the President. When he says something like that, you should believe him.”...
https://rickwells.us/doj-stonewalling-clearances-coup/
VIDEO:  https://www.youtube.com/watch?v=gBN3uIKeZjA
.
The Untold Story of Japan’s Secret Spy Agency by Ryan Gallagher
{ theintercept.com } ~ Tokyo’s Ichigaya district, about three miles northeast of the bright neon lights and swarming crowds in the heart of Shibuya... a driver quietly parks a black sedan-style car outside a gray office building. Before setting off on a short, 10-minute drive south, he picks up a passenger who is carrying an important package: top-secret intelligence reports, destined for the desks of the prime minister’s closest advisers. Known only as “C1,” the office building is located inside a high-security compound that houses Japan’s Ministry of Defense. But it is not an ordinary military facility – it is a secret spy agency headquarters for the Directorate for Signals Intelligence, Japan’s version of the National Security Agency. The directorate has a history that dates back to the 1950s; its role is to eavesdrop on communications. But its operations remain so highly classified that the Japanese government has disclosed little about its work – even the location of its headquarters. Most Japanese officials, except for a select few of the prime minister’s inner circle, are kept in the dark about the directorate’s activities, which are regulated by a limited legal framework and not subject to any independent oversight...
https://theintercept.com/2018/05/19/japan-dfs-surveillance-agency/?utm_source=The+Intercept+Newsletter&utm_campaign=cb726c7fcf-EMAIL_CAMPAIGN_2018_05_26&utm_medium=email&utm_term=0_e00a5122d3-cb726c7fcf-131896129
.
North and South Korean leaders meet for second time in a month

by Kathleen Joyce
{ foxnews.com } ~ In a surprise turn of events, North Korean leader Kim Jong Un met with South Korean President Moon Jae-in in the demilitarized zone... for the second time in a month on Saturday to discuss the peace commitments they reached in their first summit. The meeting came hours after President Donald Trump suggested his June 12 meeting with Kim may still go ahead. Moon’s office, who released photos of the meeting, said the leaders met on the North Korean side of the demilitarized zone in the village of Panmunjom between 3 and 5 p.m. local time. The Blue House said Moon would personally announce the outcome of Saturday’s summit on Sunday...
http://www.foxnews.com/world/2018/05/26/north-and-south-korean-leaders-meet-for-second-time-in-month.html
VIDEO:  http://video.foxnews.com/v/5789976153001/
.
One Teen and Three FBI Operatives: Was the
Government Behind a 17-Year-Old’s Terror Plot in Texas? by Murtaza Hussain
{ theintercept.com } ~ TOWARD THE END of last year, as the Islamic State was collapsing in Iraq and Syria... a 17-year-old Texas high school student named Matin Azizi-Yarand began an online conversation. He had found a fellow traveler on the internet, and was hashing out whether to leave the United States to join ISIS abroad or carry out an attack in their name at home. “When the time akhi comes I want you to come down here // if you are willing that is // just need some more planning,” Azizi-Yarand said in a series of messages sent on December 25. A few weeks later, Azizi-Yarand told another individual whom he had met online about his plans to try to leave the country with others. Using the Arabic term “hijrah,” or migration, he told them, “me and others are planning // either hijrah or here // We are hoping for hijrah In sha Allah // we just need the funds.” Unbeknownst to Azizi-Yarand, both of his interlocutors were working for the government. One was an informant and another an undercover FBI agent. Another online acquaintance, with whom Azizi-Yarand had struck up a conversation in March, turned out to be an informant as well. The government operatives documented all the messages Azizi-Yarand sent to them in order to build their case...
https://theintercept.com/2018/05/23/texas-teen-isis-mall-shooting/?utm_source=The+Intercept+Newsletter&utm_campaign=cb726c7fcf-EMAIL_CAMPAIGN_2018_05_26&utm_medium=email&utm_term=0_e00a5122d3-cb726c7fcf-131896129
.
Judicial Watch Battles FBI for Anti-Trumper Text Messages 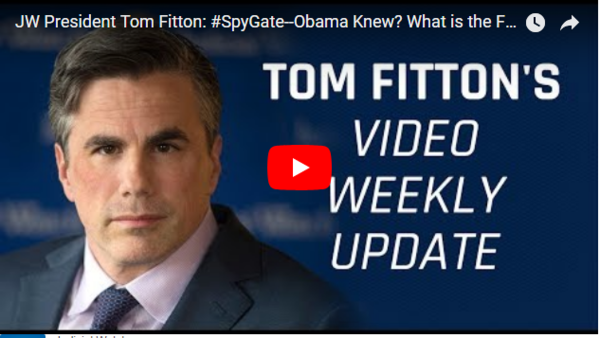 by judicialwatch.org
{ judicialwatch.org } ~ Here is a sliver of good news in our efforts to find out the truth about the extent of corruption infecting the senior ranks of the FBI... specifically in our lawsuit to get documents about “anti-Trump” senior FBI officials Lisa Page and Peter Strzok. Our legal team was just informed by the Justice Department that, “the FBI plans to send letters to Peter Strzok and Lisa Page asking them to preserve agency records on their personal accounts and personal devices and requesting confirmation that they are doing so.” We made the preservation request to the FBI as part of our Freedom of Information (FOIA) lawsuit for records of the two current and former FBI officials. Page recently retired, but Mr. Strzok is still at the FBI. We’re glad the FBI reversed course. On May 2, the FBI wrote a letter to Senator Grassley saying it had not requested information from the personal email accounts of Strzok and Page.
https://www.judicialwatch.org/video-update/tom-fittons-video-weekly-update-may-25-2018/?utm_source=deployer&utm_medium=email&utm_campaign=weekly+update&utm_term=members&utm_content=20180526154227
VIDEO:  https://www.youtube.com/watch?v=ac3LWgvINtI
.

by Todd Johnson:  Today, most U.S. print and television media outlets are focusing their attention on President Donald Trump’s decision to cancel the summit with North Korean leader Kim Jung-un. While the story definitely merits significant attention, there is another important development in the region that seems to be capturing more and more coverage and has the potential of not only affecting the political and economic stability of the Far East but the whole world.

Ever since it was announced over five years ago, the Belt and Road Initiative (B&R) has turned into a multi-trillion-dollar bet by Xi Jinping’s regime that it can shake up the world economic order while simultaneously gaining influence in East Asia, Europe, Middle East and Africa. Recently heralded by a Chinese government official as a program that, “promote(s) a balanced and sustainable global growth” the B&R continues to gain momentum as the 21st century Silk Road.
While some advocates of the program, especially key United Nations leaders, have been vocal in their support of the Chinese plan, the facts are starting to show that the B&R is having major problems and Western democracies, primarily the United States, are missing the opportunity to capitalize on the Chinese government’s poor decision-making, both economically and diplomatically.
In the latest issue of Foreign Affairs magazine, a trio of writers argue that Western banking institutions need to seize the opportunity to work with countries that want to develop internal infrastructure instead of ceding the business to the Chinese government. The current “hands off” approach being implemented by Western lending institutions has enabled Chinese banks to fill the gap and, in the process, laid the groundwork for predatory lending practices being implemented by Beijing.
It’s no secret that China is hungry to play an expanding role on the world stage and is willing to spend massive amounts of capital in the process. Jinping’s government is an aggressive adversary of the United States when it comes to implementing economic policy and the B&R campaign is a well-laid plan to exert dominance in that realm. Examples abound of China’s desire to unseat the United States economically, whether it be vaulting to number one as the world’s largest exporter of oil or the city of Shenzhen rapidly becoming a near peer to Silicon Valley in the tech sector.
Understanding this dynamic is critical if the United States wants to maintain its role as the dominate global hegemon. Rather than focus on short-term solutions against China, like tariffs, the current administration needs to focus on developing and implementing long-term economic and diplomatic policies that will not only benefit the United States but also the country where the project is located. President Trump knows better than anyone in the federal government the importance of developing infrastructure, both domestically and internationally. His administration, in concert with our allies, must work with developing nations wanting to create new projects or run the risk of seeing them partner with China. A failure to do this not only puts the United States at risk but the rest of the world as well.   ~The Patriot Post
https://patriotpost.us/articles/56189?utm_medium=email&utm_source=pp.email.3508&utm_campaign=snapshot&utm_content=body