by rickwells.us
{ rickwells.us } ~ Carter Page, is, despite the best efforts of Robert Mueller and company, still a free man who has not confessed or plead guilty to anything... who maintains his innocence. Not every frame up is as successful as the one they ran against General Flynn. Tucker Carlson asks him, in the wake of the 13 Russian show-indictments, if he helped any of the Russians “set up fake Facebook pages or plan any of their sparsely-attended rallies.” Page grins as he brings some new information to light, saying, “The only Facebook shenanigans that were happening with states-sponsored was Radio Free Europe, they published this fake news from the dodgy dossier in September 2016 and that was rebroadcasted by the media outlet Radio Free Europe, which is sponsored by Broadcasting Board of Governors out of Washington...  https://rickwells.us/page-dossier-radio-europe/
VIDEO:  https://www.youtube.com/watch?v=etW7U2D3xXM
.
Chaffetz: Mueller’s Russian Indictments
‘Dismantle’ The Left’s Narrative

by Erin Coates
{ westernjournal.com } ~ Former Rep. Jason Chaffetz said that the indictment of Russians for meddling with the election “dismantles... the Democrats’ narrative that this was all about Trump.” Special Counsel Robert Mueller’s office charged 13 Russians and three Russian companies Friday with plotting to interfere with the 2016 U.S. presidential election, Newsmax reported. Chaffetz said that the indictment reveals that Russia had attempted to cause chaos in the U.S.  “I think it would be naive to think this is the only thing the Russians were doing and consequently, my guess is that Mueller and his team are looking into other avenues,” he said. “I am struck with the brazen nature of how the Russians will be so aggressive with so many people.”...   https://www.westernjournal.com/chaffetz-muellers-russian-indictments-dismantle-lefts-narrative/?utm_source=Email&utm_medium=newsletter&utm_campaign=dailyam&utm_content=conservative-50
.
Oops – Russian Indictments Form Basis
for Prosecuting Steele, liar-Clinton
and Accomplices

by rickwells.us
{ rickwells.us } ~ The latest, made for TV, episode of the Mueller inquisition is an obvious political ploy for... all intended to benefit those engaged in the attack on President Trump and our nation. But beyond simply the efforts to create an insulation from repercussions of their criminality and abuse, the indictments by Mueller and his pet weasel, Rod Rosenstein, offer support for the immediate indictment of prominent Democrats involved in the 2016 campaign and their tools, both inside and outside of government, including liar-Hillary Clinton. Attorney Robert Barnes noted in an article on the Law and Crime website that “Mueller indicted foreign citizens for trying to influence the American public about an election because those citizens did not register as a foreign agent nor record their financial expenditures to the Federal Elections Commission.”.. https://rickwells.us/russian-indictments-steele-clinton/
.
Does Mueller Indictment Mean liar-Clinton
Campaign Can Be Indicted for Chris Steele?

by Robert Barnes
{ lawandcrime.com } ~ Special Counsel Robert Mueller indicted foreign citizens for trying to influence the American public about an election... because those citizens did not register as a foreign agent nor record their financial expenditures to the Federal Elections Commission. By that theory, when will Mueller indict Christopher Steele, FusionGPS, PerkinsCoie, the DNC and the liar-Clinton Campaign? Mueller’s indictment against 13 Russian trolls claimed their social media political activity was criminal because: they were foreign citizens; they tried to influence an election; and they neither registered under the Foreign Agents Registration Act nor reported their funding to the Federal Elections Commission. First, if Mueller’s theory is correct, three things make Steele a criminal: first, he is a foreign citizen; second, he tried to influence an election, which he received payments to do including from the FBI itself; and third, he neither registered as a foreign agent nor listed his receipts and expenditures to the Federal Election Commission. Also, according to the FBI, along the way, Steele lied…a lot, while the dossier he disseminated contained its own lies based on bought-and-paid for smears from foreign sources reliant on rumors and innuendo...  https://lawandcrime.com/opinion/does-mueller-indictment-mean-clinton-campaign-can-be-indicted-for-chris-steele/
.
Senate Crushes Traitor
rino-McCain’s Dreamer Bill 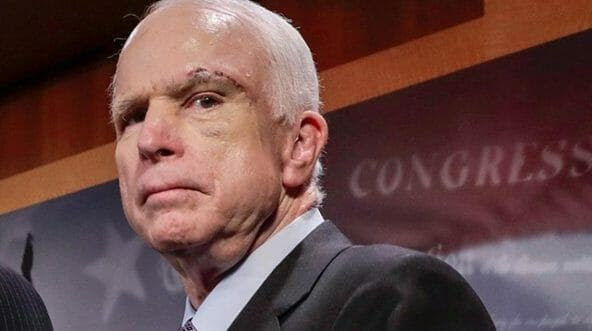 by V SAXENA
{ conservativetribune.com } ~ Arizona Sen. rino-John McCain, a self-serving, back-stabbing pretend conservative best described as a “Republican In Name Only,”... got served a dose of reality Thursday when the Senate stomped his pathetic immigration bill into the cold, hard ground. Sponsored by both rino-McCain and Sen. Christopher Coons, a Democrat, the so-called rino-McCain-Coons bill would have provided “a path to citizenship for more than 1.8 million immigrants brought to the United States illegally as children” but not funded President Donald Trump’s southern border wall, according to The Hill. Nor would have the bill addressed the president’s concerns about the diversity visa lottery program and chain migration...  https://conservativetribune.com/senate-crushes-mccains-bill/?utm_source=Email&utm_medium=patriottribune&utm_campaign=dailypm&utm_content=libertyalliance
.

The news raises a number of obvious questions about Netanyahu’s political future. But it also raises an equal, if not greater, number of questions about the purity of the police service’s intentions and its trustworthiness.

Let us begin by considering the specific cases that form the bases of police recommendations against Netanyahu.

The first investigation has been dubbed Investigation 1000 by the Police’s main criminal investigations unit, Lahav 433. The investigation surrounds the relationship between Netanyahu and his old friend, Israeli businessman and Hollywood movie producer Arnon Milchen. The police have recommended that Milchen be indicted for paying bribes to Netanyahu. The police recommend indicting Netanyahu for taking bribes from Milchen and acting illegally on his behalf.

According to Israel’s Hadashot television news, this investigation was the top story in terms of volume of coverage during 2017.

The police allege that between 2007 and 2016, Milchen showered Netanyahu and his wife Sara with cigars, champagne, and jewelry, often purchased at their request. In 2014, Milchen’s business partner, Australian businessman James Packer, who was also a friend of Netanyahu and his family, allegedly began giving similar gifts to the Netanyahu family.

In exchange for those gifts, the police allege that Netanyahu supported extending a law passed in 2008, when Netanyahu was the head of the parliamentary opposition, that gave returning Israeli expatriates tax forgiveness for ten years of unpaid back taxes. That is, Israeli expatriates were not liable for Israeli income tax for their global income earned over the decade before they returned to Israel.

In other words, today, Lapid is Netanyahu’s chief political rival.

On Tuesday, the police told reporters that Lapid is the key witness against Netanyahu in Investigation 1000.

In other words, Netanyahu’s chief political rival is the key witness against him.

Lapid reportedly told investigators that Netanyahu asked him twice to advance Milchen’s request to extend the period of tax forgiveness to returning expatriates beyond the ten years granted by the law. Lapid and the finance ministry opposed Milchen’s proposal, and his initiative went nowhere.

Netanyahu also allegedly intervened on behalf of Milchen in two proposed deals related to Israeli television stations that Milchen either owned or wished to own.

But then, neither of his proposed interventions, if they occurred, were successful.

Since Milchen stood to lose a significant amount of money if he was unable to remain in the U.S., the police claim that Netanyahu’s intervention on his behalf with Kerry represented the return on Milchen’s gifts.

Milchen himself has a long record of service to Israel’s Mossad — its foreign spy service — and reportedly has contributed significantly to Israel’s defense. Netanyahu claims that he acted out of respect for Milchen’s long service to Israel’s security. In addition,, Israel’s late president and prime minister, left-wing icon Shimon Peres, also intervened on Milchen’s behalf with U.S. authorities.

In the second probe, dubbed Investigation 2000, the police recommend indicting Netanyahu following a discussion he held – and recorded surreptitiously – in 2014 with Arnon Mozes, the publisher and controlling owner of Israel’s mass circulation daily, Yediot Ahronot. The police found the recorded conversation on the mobile phone of Netanyahu’s former chief of staff, Ari Harow, who is the subject of a separate and unrelated influence-peddling probe. Netanyahu claims he recorded their conversation on the advice of his attorney because he was afraid that Mozes would try to extort him.

The police claim that the conversation is proof that Mozes offered Netanyahu a bribe and that Netanyahu accepted the offer. They recommend charging Mozes with bribing Netanyahu, and charging Netanyahu with accepting a bribe from Mozes.

The odd thing about this claim is that no deal was struck. To the contrary.

According to the recording of the men’s conversation, which was leaked to the media by the police more than a year ago, Netanyahu and Mozes discussed an elaborate scheme to change the newspaper market in Israel in Yediot Ahronot‘s favor.

Israel’s largest circulation paper is Israel Hayom, a free tabloid that is owned by conservative American billionaire — and Netanyahu supporter — Sheldon Adelson. In their recorded conversation, Mozes raised the possibility of Netanyahu curtailing government advertising in Israel Hayom and working to cut back its circulation in order to increase Yediot Ahronot‘s market share.

In exchange, Mozes offered to scale back the negative tone of his paper’s coverage of Netanyahu.

In the event, nothing came of the conversation. Indeed, in late 2014, against Netanyahu’s expressed wishes, then-justice minister Tzipi Livni put forward a controversial media bill, which was based on a legal opinion written by Yediot Ahronot‘s legal advisor. The bill, which was dubbed the “Israel Hayom law,” would have forced the shutdown of the paper by barring its owners from not charging money for it.

The law passed a preliminary reading in the Knesset with 43 votes. Netanyahu and his Likud Party voted against the bill. Moreover, to prevent the bill from going forward, Netanyahu disbanded his government and the Knesset and called new elections a bit more than a year into his term.

In other words, to prevent any harm to Israel Hayom – and transitively, to prevent any advantage from being accrued to Yediot Ahronot — Netanyahu took the radical step of standing for election again.

For more than a year, the police refused to investigate any of the 43 lawmakers who voted in favor of the bill, or to analyze the coverage they received in Yediot Ahronot in following their support. Three weeks ago, the bill’s sponsor, Labor Party member of Knesset Eitan Cabel — who enjoyed extraordinary coverage in the paper — was brought in for a brief interview.

In other words, the police are recommending that Netanyahu be indicted for a conversation that went nowhere, which he recorded. And the police are not investigating 42 out of the 43 lawmakers that supported a move that would have given Mozes everything he asked Netanyahu for, but didn’t receive, while the 43rd lawmaker was subject merely to a brief interrogation.

This brings us to the police.