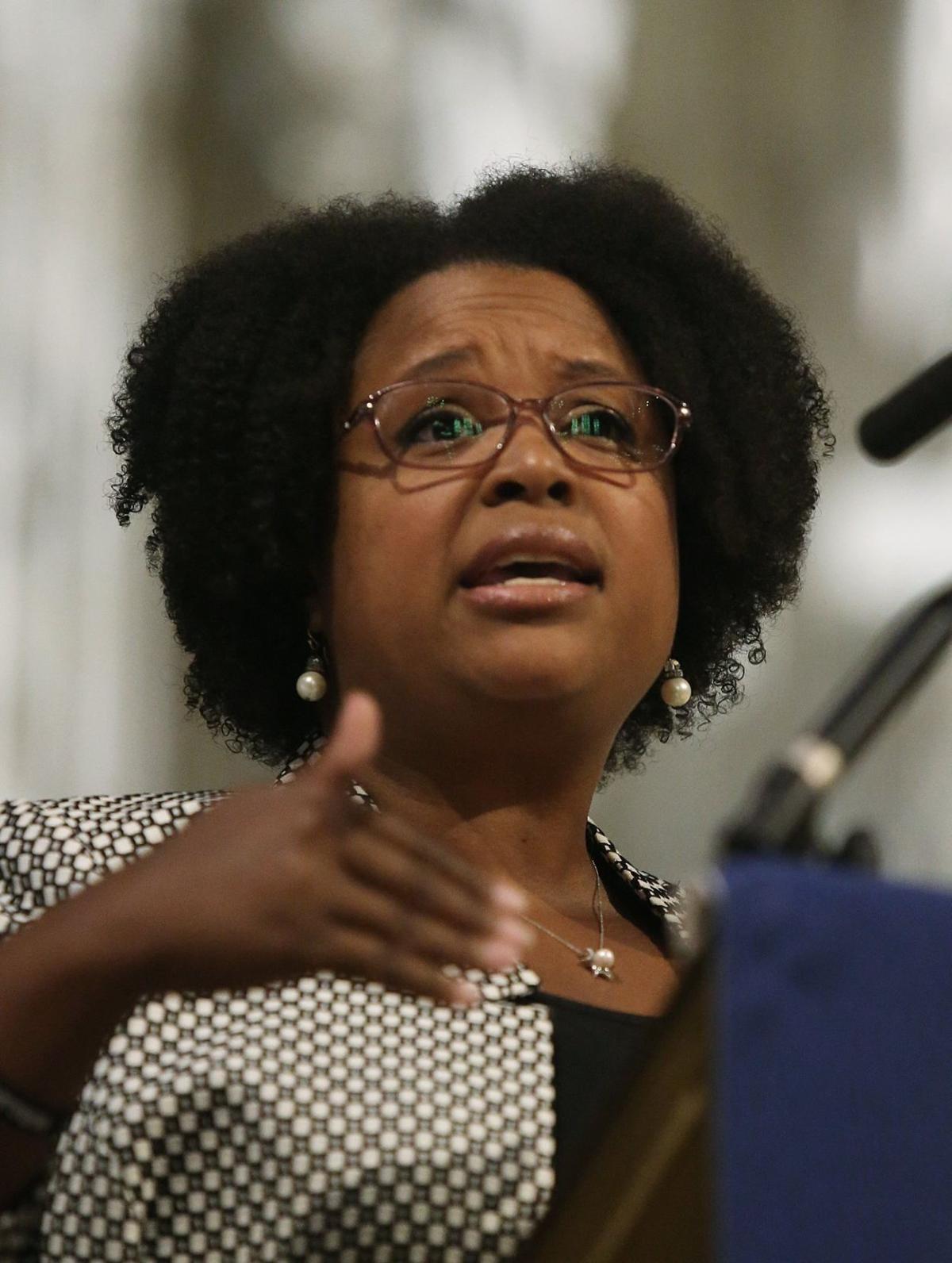 JEFFERSON CITY • Some of Missouri’s highest-ranking officials delivered on Friday an ultimatum to state Sen. Maria Chappelle-Nadal: Resign or be removed from office.

Gov. Eric Greitens, a Republican, issued the first warning just before noon in a series of tweets blasting Chappelle-Nadal, a Democrat, for a comment Thursday on Facebook in which she said “I hope Trump is assassinated!” She quickly deleted the post.

Condemnation on Thursday was swift, with both Democrats and Republicans calling on the senator from University City to resign. But Chappelle-Nadal insisted she would not.

On Friday, Greitens said this in his tweets: “Senator Chappelle-Nadal said she hopes the President is killed. Republicans and Democrats have called on her to resign. Her response: ‘Hell no.’ Last night, in an interview, she refused to apologize — twice. If she will not resign, the Senate can vote to remove her. I believe they should.”

“I’m calling on Sen. Chappelle-Nadal to do the right thing and resign from her office,” Parson said. “However, if she does not do so by veto session, I will, in my position as president of the Missouri Senate, immediately seek the expulsion pursuant to Article III Section 18 of the Missouri Constitution.”

He said that he would seek Attorney General Josh Hawley’s opinion on the applicability of the constitutional provision and that he would ask senators to initiate Chappelle-Nadal’s removal.

That article in the state Constitution says the Senate can act with a two-thirds vote to “expel a member.”

“She may have been very angry when she wrote those words, but anger is not a valid excuse,” Parson said. “The comments she made are indefensible.”

The Secret Service said Thursday that it was investigating. Threatening the president is a federal crime.

Two of the highest-ranking Senate Republicans said Friday afternoon in statements that they would employ rarely used parliamentary tools to expel Chappelle-Nadal if need be.

“We are preparing for options afforded in the Missouri Constitution and the Senate Rules if she continues to defy the public outcry and not resign,” Senate President Pro Tem Ron Richard, R-Joplin, said in a statement.

“The process of expulsion is a significant, rarely used step that should not be taken lightly,” said Majority Floor Leader Mike Kehoe, R-Jefferson City. “We are researching the detailed steps involved in the expulsion process and will be prepared to move forward as necessary.”

Chappelle-Nadal was defiant Thursday in several interviews in which she refused the calls to resign. She said she wrote the five-word Facebook comment because of her anger over President Donald Trump’s response to violence in Charlottesville, Va., last weekend.

Chappelle-Nadal told the Post-Dispatch she met with the Secret Service on Thursday and explained to them that she had made a mistake.

“I made sure it was clear to them that the anger I experienced was related to the trauma my constituents are going through,” said Chappelle-Nadal, whose district includes Ferguson, a landfill linked to nuclear contamination and low-performing school districts.

“I do not wish harm to anyone. I could have chosen and should have chosen better language. I do not think it is worthy of expelling me from the Senate,” Chappelle-Nadal said. “I am owning up to it. He makes me mad from time to time. He says outrageous things. My emotions got the best of me.”

Chappelle-Nadal said Greitens and Parson were trying to divert attention away from Trump and his controversial statements about Charlottesville.

“They are creating cover for the president instead of dealing with the real issues at hand,” Chappelle-Nadal said.

Chappelle-Nadal said she had no intention of resigning.

It was still unclear Friday whether the senator would face any charges because of the post. On Thursday, the Secret Service’s St. Louis field office said agents were “looking into this.”

On Friday, the office would not confirm if Chappelle-Nadal had been questioned or if an investigation was ongoing. But Parson, in his news conference, did mention an “ongoing investigation.”

“I cannot say for certainty if her remarks meet the standard of prosecution under federal law,” Parson said. “That is for the Secret Service and the federal prosecutors to determine through their ongoing investigation.”

On Friday, members of the nonpartisan Senate administrative staff were digging into records, searching for any case in Missouri history in which a senator was expelled by his or her peers.

They could not find any.

Parson said Chappelle-Nadal would have until the Legislature’s annual veto session in September to resign, but it was unclear whether Parson and allies intended to start expulsion proceedings in the veto session, when lawmakers are allowed only to consider vetoed legislation.

“We definitely do not think such action could be done during veto session,” said Adriane Crouse, secretary of the Senate. “We (the Senate) or the governor could call us in a special session to do it.”

The part-time Legislature works from January to May, during a typically brief veto session in September and whenever special sessions are called. For Chappelle-Nadal, first elected to the Senate in 2010, the 2018 regular session would be her last because of term limits.

The only expulsion case Crouse could point to on the Senate side of the Capitol was a 1945 bribery case involving a Republican from Clayton.

State Sen. Joseph Falzone was accused of soliciting a $1,500 bribe to push legislation cosmetologists favored, according to Post-Dispatch archives.

A special Senate panel voted to charge Falzone with bribery in June 1945. If the full Senate convicted him, the panel recommended expulsion.

“The Senate chamber is being used for the first time for a trial of a Senator,” Curtis A. Betts, a Post-Dispatch correspondent, wrote. “There is no record of such a proceeding in this state in the past. … The chamber lends itself well to the solemnity of such an occasion. There is a dignified coldness about its marble walls.”

Falzone resigned four days into the trial, citing his wife’s illness and saying he would be ineffective if he held onto his seat.

Joel Currier of the Post-Dispatch contributed to this report.

What have been her contributions to either her state or country during her years of public service?  She says she was so angry at Trump and how his statements hurt her constituents that she should have chosen better language but did not do so.   Trump himself has spoken out many times that being political correct has hurt the country.  Therefore, she was guilty of being politically correct.  The president would understand the anger.  He personally would not expect her to be expelled for showing anger.  Otherwise, we would have to expel the President also.