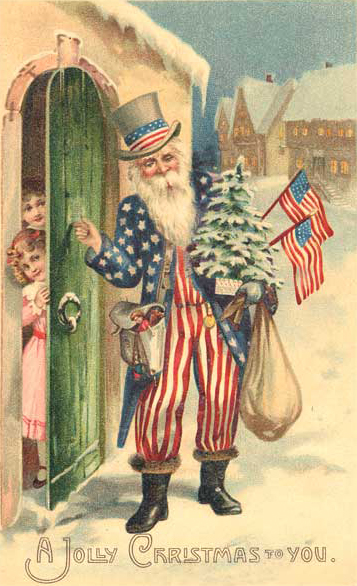 Have you seen the panic? There have been a lot of erroneous stories of late that exaggerate, not the danger that an over-sized government and its manic bureaucratic wing present to us, but the actual situation we are in as Americans at this very moment. No need to panic! Merry Christmas, we are still a free people.

Like Ronald Reagan I am an optimist. I believe in Americans, and I believe that there will always be a free people in this country. Those people comprise the thread by which our Constitution now hangs. It is a strong thread, and though it seems tenuous at times, our Constitution gleams with a bright spark of Divine inspiration. Our founding documents, being inspired by the Mind of God, are more clever than the enemies of the republic. Despite the pounding and shredding of many of the basic tenets of the Constitution and the Bill of Rights, they continue to protect us. We still own our most basic possessions; our lives, our property, our voices, our choices, and the overriding right to defend them all.

The signers of the Declaration of Independence all pledged their lives to the cause of liberty. When they signed the Declaration they may have thought they were signing their death warrants. They pledged their blood, and likely expected to shed it. But not one of those men lost their lives as a direct result of battle with the British. Some were captured and tortured for their roles as signatories to the Declaration of Independence. Nine of them lost sons to the Revolutionary War. Some had their homes and treasures ransacked. But they were not outright murdered by their adversaries. Their honor has only been magnified through time. And their treasures, if lost, were replaced with that sufficient for their needs. We too are protected as the the necessity for a Revolution of the 21st Century grows ever greater.

Some 20,000 Americans gave their lives to fight the British tyranny. Those lives sacrificed literally changed the world forever. I do not minimize the threats from despots and tyrants who now threaten our country from abroad, and from Communists and Progressives within our own social institutions and government, but we will not give up our freedom. It is impossible to quench the flame of human liberty once it is lit. We will battle with our might to defend it, but it will never be snuffed out.

As Christmas Day nears, I ponder my faith in God, and in His holy Son, Jesus Christ. My heart brims with gratitude to God that He gave me the privilege of being born an American. I am also thankful, though sometimes burdened, by the responsibility He gave me to fight to keep this country free and prosperous. As Christ freed His people from the chains of death and damnation, so too will He give us the strength to defy the chains of slavery to Big Government, and evil ideologies who hate us, and covet, and want to destroy, the blessings we enjoy as Americans. Living in Western Colorado, near the Colorado river, nestled between the mountain's majesty and the splendor of the high desert, I know that this is God's country. I also know that America is God's nation.

Let us reflect upon these things. The moments of panic steal our personal peace, but they also damage our credibility. As the Star of Bethlehem was a guiding light to the wise men who sought the Son of God, so let us be a ray of hope and optimism to those who are looking for a happier future in America. Hope burns bright, man will not easily become enslaved. We are still free to worship. We are still free to love our neighbors. Merry Christmas, we are still a free people.