Any day now, the Mask Gestapo, Joe and Kamala will be knocking on your front door.  Mask Gestapo  comes knoking - ‘No Mask Dem. Donna’ & Her On-The-Rail Air-Drying Undies

Mask Gestapo. Donna’ & Her On-The-Rail Air-Drying Undies‘No-Mask Dem Rep.’ Donna Howard travelling with a group—six of whom later tested positive for Covid—is now calling for “universal mask-wearing” to prevent the spread of the “Delta” variant.

The photo of the grinning but publicity-shy Texas Democrat pictured on a private plane to DC with the other 60 Dem yahoos went viral over the ‘Net.

No mask for Donna—but one for everyone else in the universe!

In other words, Mask Gestapo - ‘No-Mask Donna’ takes zero responsibility for exposing people to Covid-19—but wants to save the universe from the spread of the Delta variant.

“Recall, Donna Howard was one of the 60 Democrat lawmakers photographed maskless en route to DC last week after fleeing Texas to stop the GOP voting bills.”

You can’t vote—or do anything else that comes with your job as a public official, when you’re not there.

“Donna Howard doesn’t need to wear a mask, but she is demanding different rules for the peasants.(Gateway Pundit)

“The Texas Democrat trip to DC turned into a major Covid super spreader event and now they’re demanding common Americans wear masks and adhere to Covid restrictions. Not just Americans but all in the universe where the Delta variant is scaring folk.

“We need to follow the science here. Texas needs to change course and allow for universal mask-wearing to prevent spread of the highly contagious delta variant, esp as children under 12 cannot get vaccinated yet,” Donna Howard said on Wednesday. (Gateway Pundit) 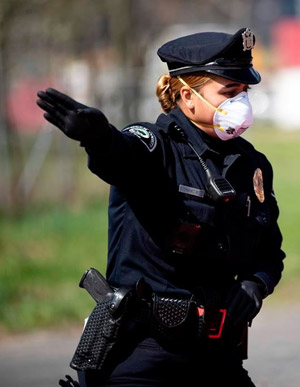 “Last week Donna Howard tried to illustrate the personal sacrifice she made when she took a private jet to DC by posting a photo of her bra and panties air drying to her social media account.

“You bet we’re recognizing & honoring our country’s heritage. As most Texans, tho, this is what we’re doing tonight—using whatever is accessible, uwashing (sic) our clothes in the sink”.

Guess, Mask Gestapo  - “no-Mask Donna’ didn’t heed the advice of mothers worldwide who advised their kids, “Never travel on an overnight trip without a change of undies in your suitcase”.

So much better to “honor our country’s heritage with the kind of street theatre that comes from air drying one’s undies over the shower curtain rail.
‘No-Mask’ Donna’s peasants should brace themselves for yet another lockdown come this fall when the next Covid wave hits with the Delta variant.

Even so-called conservative news outlets like Fox News and Newsmax are pulling switcheroos on the safety of the experimental Covid vaccines.

Conservative icons like Sean Hannity are admonishing citizens to take the jab, in a world where the media gets to advise the masses what to do about health.

Meanwhile, the Dems must be pulling their hair out that Florida Guv. Ron DeSantis is openly siding with pro-vaccine Big Pharma. President Donald Trump is pro-vaccine, and it is commonly believed that Trump and DeSantis will likely be the next president and vice president—with Democrats not being able to use their not being anti-vaccine against them.

Any day now, the Mask Gestapo, Joe and Kamala will be knocking on your front door.