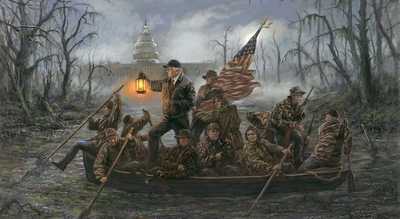 When Donald Trump took office in January of 2017, neither he nor the patriots that put him there realized the extent of the Deep State. The swamp is global, the mire is deep. The scheme of the globalists is to take over the governments of the world and transform the planet into a one-world Communist state with Sustainability as the new world religion. This sustainability is only for them, to sustain their money, their power.

Tea Party Teams will be meeting-up in DC on the 5th. Your local contact person will give you instruction of where, when and what to bring. Antifa and BLM has infiltrated all organizations and ready to disrupt, but we know this and are ready for them.

The Chinese Communist Party (CCP), at least for the time being, seems to be cooperating. After all, they want to see America fall as badly as the conspirators do. At the same time, the CCP sees these globalists for who they are, traitors without an army, to be eventually swept aside as competitors for world domination. Nobody loves a traitor.

Any fool can see forces are gathering against the people. Big Tech, Big Media, Big Medicine, Big Pharma, it is now beyond conspiracy. The globalists are open about their plans to anyone who cares to listen. Much of our Washington institutions, our press and education system, have been made political tools, criminal alliances between political parties evident. Corporations have assumed massive political power, in many cases calling the shots. Whether Americans have any real say in their government is now highly debatable.

The new Democrat Party, born domestically in the 60s when they created a new moral imperative, selling redemption for what they see as our sinful past, spent our country into oblivion, as much as 25 trillion dollars. It was all to gain power, leaving the subjects of their noble intentions behind, and opening every Pandora’s box in the process. They have now joined with these global pirates.

Any fool can see forces are gathering against the people. Big Tech, Big Media, Big Medicine, Big Pharma, and many major corporations have joined foreign conspirators to dictate our lives, our customs, to decide what we are to see, not see, what we are to believe, and what is moral. What fools they be. They are to be destroyed along with the people they think they are fooling.

Our Republic, and Canada as well, are joining the world in government by the ruling class, the rich and powerful, rather than government by the people. It is self-serving, corrupt to its very core, filled with happy talk, with the result no different than scores of third-world s**t holes around the globe. It is now in the process of being made official here in the U.S. by this last counterfeit election. Investigations are aplenty with prosecutions nowhere to be found. Federal and many local law enforcement institutions can no longer be depended on to enforce law. Trump’s presidency has become an island of national allegiance in the middle of an ocean of traitorous sludge.

January 6, Patriots Day, could be a new national holiday to rival July 4!! California, accustomed to making movie trailers, is showing us the coming attractions…government out of control, lawless, crippling taxes, the middle-class thrown into poverty to serve the elite, homeless everywhere. Coming soon to a city and town near you.

The founders knew this was a possibility, our nation morphing from limited government to an unruly, tyrannical beast, hence the 2nd Amendment. The Left is poised as they lick their chops to take it away.

The traitors know that Trump has to to be eliminated at any cost, but President Trump and patriots everywhere are still blocking the road. Subversive plans were made years ago, executed, and are still in motion. Never mind we sent him to Washington in 2016 and overwhelmingly again in 2020. When or if Biden takes office they will then deal with the Trump voters.

January 6 is the day Congress counts the votes of the electors. It is a day when our government decides if it is to be the voice of the people or the voice of foreign and domestic enemies. Hundreds of thousands of patriots will gather on that day to witness their representatives confirm or deny their corruption. It will be a day of announcing the character of governance they will be leaving to our children and grandchildren.

January 6, Patriots Day, could be a new national holiday to rival July 4. We could see a new birth of freedom, a day when everyday Americans take a stand and oppose those who speak slick words, but deliver abomination. It will be the patriots that remind our government that we are in charge…a day to admonish the world that we are not to be ruled, but governed.

Don’t expect many Republicans to stand up for what is right, they are weak! The history that is no longer being taught has caught up to us. This is not about the future of Donald Trump. It’s about the future of our Constitutional Republic. We are soon to be reminded that freedom is never free. We have cheapened our freedom and will soon realize the cost to keep it. The USA is an exceptional country. Liberty is never the natural order of things.

Our country is in a very precarious place. It will be up to patriots to decide our future, whether we live in liberty or slavery. Don’t expect many Republicans to stand up for what is right. They will only concern themselves with their careers. The only thing they do in unison is cluck. The existence of our nation and freedom everywhere is at stake. We will either be the home of the brave or the home of the snowflakes, choosing safety over liberty and getting neither.

The people always get the government they deserve and allow. Yes, we do have a Republic and we CAN keep it, if we stand together. Freedom will have its last stand right here. Let’s make history. God help us.