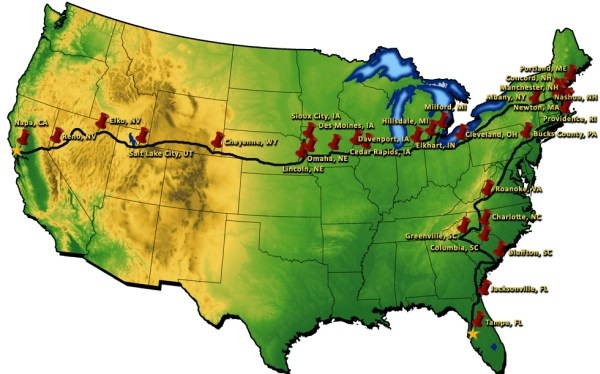 Tea Party Express V national bus tour begins this Saturday in Napa, CA. As I pack my bags and organize my performance music in preparation to embark on my fifth national Tea Party Express tour, I am a bit frustrated by those still clueless about the Tea Party movement; who we are and our propose.

Please excuse my frankness. Despite all the Tea Party has done to pull our country back from diving over the cliff to it's death into liberal socialistic hell, incredibly, there are still “Republicans” who think we are “fringe loonies”. If God had not sent the Tea Party, America as we know it would be over!

Then, we have the racist Congressional Black Caucus. Rather than abandoning their racial bias to make an honest assessment of President Obama's job performance and his failed economic policies, they blame epidemic high black unemployment on the Tea Party. Their accusation is so despicable and absurd, it is unworthy of a response.

Rep. Frederica Wilson (D-FL), a member of the Congressional Black Caucus said, “Let us all remember who the real enemy is,” she added. “The real enemy is the Tea Party. The Tea Party holds the Congress hostage. They have one goal in mind, and that’s to make President Obama a one-term president.”

Another member of the Congressional Black Caucus, Rep. Maxine Waters (D-CA), said, “The tea party can go to hell.”

Rep. Wilson, you did get one point 100% correct. It is and should be the goal of every patriot who loves, freedom, liberty and America to “make President Obama a one-term president.” I pray, “Dear Lord, pleeeeease make it so.”

Another member of the tag team assaulting and slandering the tea party is the liberal media. I have attended over 200 tea parties nationwide including Alaska. On numerous occasions the media has asked, basically, “Why are you, a black man, hanging with these racist white folks?”

My response is always the same, “These folks are not opposing Obama's skin color. Several even voted for him. They are simply saying no to his socialistic agenda.”

Unfortunately, I have witnessed liberal media completely ignoring the mood and tone of a tea party rally to fit their preconceived report of the event.

Case in point. On a beautiful sunny day at a tea party rally in Michigan, I sang “God Bless the USA” for the finale of my performance. The response of the thousand or more in the audience was tremendous; a celebration of love for America. Afterwards, I could hardly make my way through the crowd because of so many patriots wanting to shake my hand and take pictures.

Also, at that rally was a white woman in a wheelchair who was terminally ill. Her daughter told one of our staff, “My mom said all she wanted to do before dying is to meet Lloyd Marcus.”

Wow, I can not begin to tell you how much that humbles me.

Amidst the overwhelmingly loving, happy and upbeat atmosphere, a stoned faced reporter approached me. She asked me if I felt comfortable at this racist hate-filled tea party. I wanted to say, “Are you nuts?” Despite holding my tongue and trying to politely convince the stern reporter otherwise, she became visibly angry at me, abruptly turned and walked away.

Brother and sister patriots, I am so looking forward to seeing and fellowshipping with you; hanging with my true “homies”; folks who share my love for America.

My plan is to give you daily updates from the road; highlights of the rallies, the local food favorites I sample (my mouth still waters thinking about the awesome bar-b-que spare-ribs a woman greeted our bus with in Memphis; the best I've ever eaten. Sorry mom.) and the extraordinary patriots I meet on every tour.

Please check out our tour schedule. I would love to include you in my “Million Hand Shake March” across America. http://www.teapartyexpress.org/tour-schedule/