At least that is what the markets are letting known is the driver and that is certainly part of the story.

Traders see through the stories but pay attention to them as well as the larger picture. Here is the TLT, an ETF representing 20 to 30 year bonds; rising interest rates have been killing it price: 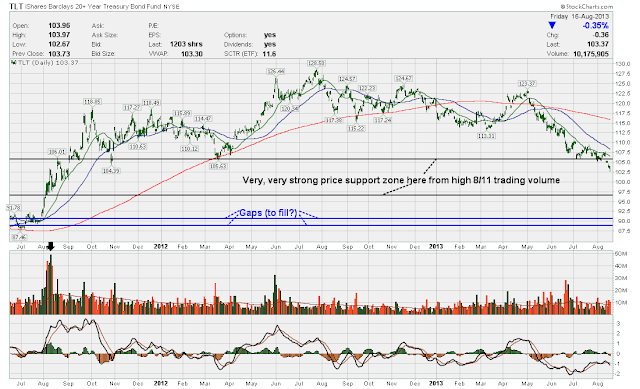 If, that linked article is right, 10-year rates are going to 3%, that could put mortgages and the 30-year up towards 5% -- without the FED moving the overnight rate (the only rate they really control).  The market may see that as a way to keep Fed rates low longer (Bernanke threatened an increase on May -- see the result on the chart above).  All rates are linked together from short to long - see the yield curve here.  The "longer term rates" must stay above the "short term rates" for banks to stay profitable -- they make a lot of their money from the "carry" between the rate times, borrowing short and lending out long.  Play with the graph on the right and move a vertical line (that appears when you click on it, or you can animate it with the button) across the time scale.  Note the inverted curve (shorter rates higher than long term rates)  at the 2000 stock market peak and the similarly flat curve at the 2007 stock market peak.  Compare that to our current yield curve, held artificially low by the emergency (going on 6 years) federal policies, anchoring it at 0%.  Normal economic cycling has been suspended by the 5-year emergency measures!

"So we want stocks to go up for years?  Well hold down interest rates -- a crappy economy will help.  So what if it cripples growth to a crawl?  We will worry about that later.  What a juvenile selfish approach to managing our economy!

Note the move to near 0% (bottom of the yield curve at the origin of the graph) overnight rates in 12/07, carrying through the present -- what makes that possible is the almost unlimited printing of money (TARP, QE1, QE2, Operation Twist), massively inflating the US money supply (To make matters worse, most foreign countries are in the same boat or even worse off!). While stocks may retrace in price somewhat, until that policy is rescinded (or at least there is an announcement of a time-table for rate adjustment (up), stocks should be buoyed at some intermediate level.  If they start to drop very low, despite the extremely loose money policy, that would be a very very bad sign for the market as well as the economy.

TLT should bottom out around 90 to 100.  If stock prices fall steeply, bond prices are likely to rise again.